Cameroon is facing violence in three regions, local communities are struggling to resist Boko Haram recruitment and the humanitarian crisis is worsening. In this excerpt from our Watch List 2018, Crisis Group urges the EU and its member states to support regional governments to provide humanitarian assistance and encourage the state to develop projects to boost local economies.

This commentary on Cameroon's electoral uncertainty and multiple security threats is part of our annual early-warning report Watch List 2018.

Cameroon’s governance and security problems for many years have attracted little outside attention. But the country now faces violence in three regions: the Far North, where Boko Haram continues to mount small-scale attacks, as well as the Northwest and Southwest, where an incipient Anglophone insurgency emerged in 2017. Added to this ambient insecurity is a refugee crisis in the East and Adamaoua, to which 236,000 people from the Central African Republic have fled militia battles. Elections scheduled for October 2018 will be a major test, as will the eventual transfer of power away from President Paul Biya, now 85. 2018 is a crucial moment for the international community, and in particular the EU and its member states, to engage in early action and prevent further escalation.

Boko Haram: still a threat to a neglected region

Boko Haram, active in Cameroon’s Far North since 2014, has killed about 1,800 civilians and 175 soldiers, kidnapped around 1,000 people and burned and looted many villages, while the conflict has displaced some 242,000 and badly disrupted the local economy. Some 91,000 Nigerians have fled Boko Haram-related violence in Nigeria to Cameroon. Though battered by security forces and riven by internal divisions, Boko Haram remains a threat in the Far North: in 2017 the group has killed at least 27 soldiers and gendarmes, as well as 210 civilians. It could regain strength if Cameroonian authorities neglect the crisis.

The war against Boko Haram has strained local communities, given rise to humanitarian crises and highlighted the need for longer-term development.

Boko Haram fighters and associates have surrendered in increasing numbers. Dozens of former militants have been sent home, after swearing on the Quran they would not rejoin the group. About 80 others are being held at a military camp in Mayo Sava. To encourage more such surrenders, authorities should avoid blanket stigmatisation and differentiate between hard-core fighters and others. The government also needs to develop a clear plan to counter the appeal of the jihadist ideas that some of the Boko Haram fighters that have given themselves up or been captured continue to espouse. Effective justice and reintegration mechanisms are lacking. Hundreds of supposed Boko Haram members are currently in pre-trial detention, a situation that risks fuelling their further radicalisation; their status should be resolved as swiftly as possible. Authorities also should seek to implement flexible, locally-informed mechanisms to facilitate the social reintegration of former Boko Haram fighters and encourage new surrenders. Leaving this to the whims of ad-hoc local efforts is inadvisable: given the destruction wreaked by the insurgency, communities are highly resentful, and poorly conceived reintegration schemes could sow the seeds of future problems. This is in contrast to neighbouring Chad, where local communities seem to be integrating former militants somewhat successfully on an informal basis. The EU should encourage national authorities, both in Yaounde and in regional capitals, to elaborate and implement their own plans to manage the demobilisation of former Boko Haram members.

The war against Boko Haram has strained local communities, given rise to humanitarian crises and highlighted the need for longer-term development. In 2018, Cameroon’s international partners, including the EU, should provide further humanitarian assistance in the Far North, focused on strengthening support to displaced persons and host families as well as supporting the voluntary return of Nigerian refugees. Where required, emergency operations should continue, but humanitarian efforts should also evolve into a more sustainable development approach.

The challenge is to stimulate the local economy without filling the coffers of Boko Haram, which taxes local trade and whose recruitment efforts in the past have been facilitated in part by offering small business loans and other financial incentives. Achieving the right balance will be difficult. But European support for small businesses within the formal and informal economies could help undercut local backing for Boko Haram. Separately, while Yaounde has long controlled the Far North by co-opting local notables, Boko Haram’s spread into Cameroon was partly facilitated by tapping into anger at local elites, thereby demonstrating the limits of that approach. Instead, Cameroon’s partners should encourage the state to reassert its presence in the north in a participatory and inclusive manner rather than through proxies, including via development projects that boost local earning potential.

The Anglophone crisis: an insurgency in the making

The crisis in the Anglophone regions (the Northwest and Southwest), which started as a sectoral protest, is rapidly developing into an armed insurgency, following the Cameroonian security forces’ violent repression on 22 September and 1 October. While there are hardliners among the militants, the government bears a large share of the responsibility for the conflict. It failed to recognise the legitimacy of Anglophone grievances; its security forces committed widespread abuses; and it imprisoned many peaceful activists in early 2017.

Several small “self-defence” groups (the Tigers, Ambaland forces and Vipers, to name a few) now operate alongside two armed militias: the Ambazonia Defence Forces (ADF) and the Southern Cameroons Defence Forces. Since November 2017, these groups have launched low-intensity attacks that have killed at least 22 and injured 25 among soldiers and gendarmes. An unknown number of separatist fighters have died in these clashes. The military crackdown also exacted a large humanitarian toll and involved significant human rights violations. The violence has left at least 90 civilians since October 2016. Around a thousand have been arrested, with 400 still in jail. More than 30,000 Anglophones are refugees in Nigeria and tens of thousands have been internally displaced.

Given that the crisis is rooted in historically grounded identity-based grievances, notably the strong sentiment among Anglophones that they have been politically and economically marginalised, there will be no easy resolution. The government will need to change course and negotiate in good faith. The government’s refusal to launch a dialogue with peaceful Anglophone leaders has corroded the community’s trust in state institutions and provoked escalating violence. The crisis also illustrates the limits of the country’s centralised governance model, which show signs of atrophy. Discontent is still mounting in Anglophone areas. Reports suggest that some members of the security forces are joining the insurgency.

A direct dialogue between the government and Anglophone community leaders is critical to de-escalate the crisis, particularly ahead of the October elections. A wider conversation, which should include discussion of different models of decentralisation and federalism, is also important, given the failings of the current model. The EU and its member states should take advantage of the government’s concern about its international image and desire to preserve cooperation with them to nudge it toward direct talks and a national dialogue. 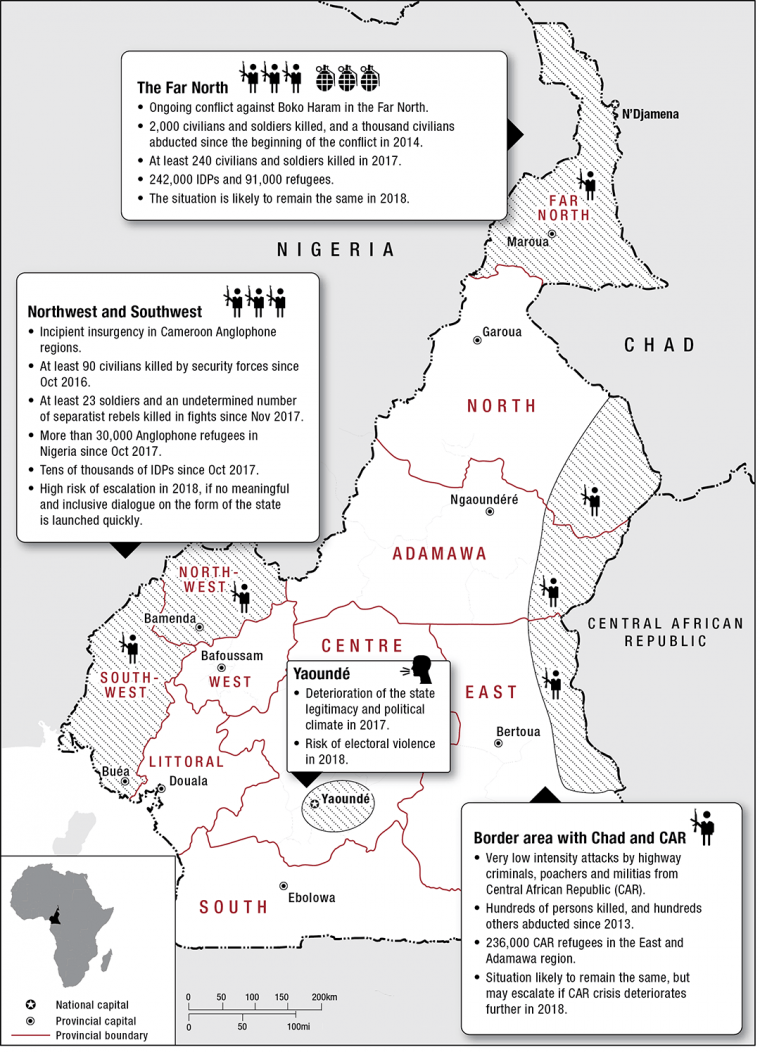 Most of the country’s security threats stem, at least in part, from bad governance and an over-centralised political system. While the 2018 elections are likely to see the ruling party retain power, a vote perceived as manipulated or unfair could further diminish its legitimacy, making it even more remote from citizens and feeding greater levels of violence. Election season will be an especially risky time if, as appears likely, Anglophone militants attempt to disrupt the balloting in the Northwest and Southwest regions, and possibly elsewhere.

More broadly, while many local activists and international actors see an eventual transition from President Biya, whose party dominates the government, as a prerequisite for improvements in governance, they also fear that his departure could trigger instability. European and other foreign powers should start laying the groundwork for a peaceful transfer of power; the longer the situation deteriorates, the harder it will be to pick up the pieces. They have two opportunities to do so in 2018: first, by supporting dialogue between the Biya government and Anglophone leaders, as described above; and, second, by working with Cameroon’s electoral body (ELECAM) and pressing the government to permit, and then deploy, election observers to protect the integrity of the vote, as best possible, and thus build confidence in the electoral system. Even small gains in these areas would help mend the frayed contract between the Cameroonian state and its citizens.

Cameroon’s Anglophone Crisis at the Crossroads