CAR: The time for hard questions

The violent events at the beginning of October in Central African Republic – the public murders and clashes in the capital, Bangui; the less publicised killings across the nearly ungoverned countryside (an area greater than that of France); the raids along the CAR-Cameroon border – are symptoms of the breakdown of the international community’s security arrangements and of CAR’s interim government itself.

The international focus has understandably been on Bangui, where the transitional government is located. The October clashes made clear that the disarmament efforts by France’s Operation Sangaris have had little effect. Everyone has guns, including citizens simply hoping to protect themselves. Urban insecurity is rife, making it easy to spark a riot. In charge of peacekeeping since 15 September, the United Nations mission in the Central African Republic (MINUSCA) took its first deadly casualty and is clearly struggling to control the capital, let alone the country.

Bangui’s insecurity exacerbates that of the transitional government; some of the more serious fighting of the past two weeks was just outside interim president Catherine Samba-Panza’s residence. Following the Brazzaville summit at the end of July, the government has so far been unable to guide intercommunity dialogue or to initiate the national consultation as planned. Recent accusations against President Samba-Panza of misdirection of funds from Angola have further weakened her government, which is reaching the dangerous point of being considered by some to be part of the problem rather than of the solution. 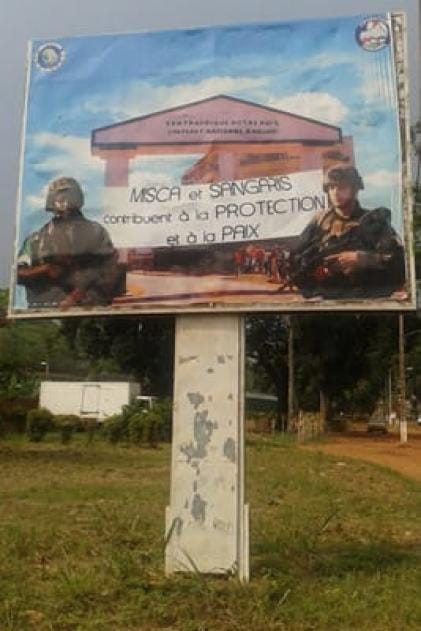 Poster in capital, Bangui, celebrating co-operation between the African Union peacekeeping mission (MISCA) and the French peacekeeping mission (SANGARIS). Text reads “MISCA and SANGARIS contribute to protection and peace”. CRISIS GROUP
…the transitional government is increasingly under pressure not only from the armed groups but from the traditional political parties.

As a result, the transitional government is increasingly under pressure not only from the armed groups but from the traditional political parties. As head of the transition, Samba-Panza has not pushed hard enough for reconciliation and inclusion. In fact, the transitional government and the transitional council are now at odds when they should be working hand in hand to save the country. Score-settling and positioning for the next elections (scheduled for 2015) remain the chief preoccupations of most politicians in the capital, leading an already disillusioned populace into a still greater alienation from CAR’s political class. Although elections seem impossible, given the present insecurity and the lack of a bureaucracy for administering them, the French pressure for elections to happen as soon as possible is exacerbating political rivalries. Some politicians have already declared their intentions to run as candidates while others are silently preparing.

The façade of regional cohesion when faced with the ongoing CAR disaster is cracking. After the violent and partial behaviour of Chad’s forces in Bangui and Chad’s unilateral withdrawal in April, Angola decided to provide financial and military support to Samba-Panza with little consultation with the other stakeholders of the CAR crisis (Congo-Brazzaville, UN, AU, EU, France and the U.S.).

This central weakness, of both the CAR government and the international presence, is accompanied by the fragmenting of the country into zones of influence.

This central weakness, of both the CAR government and the international presence, is accompanied by the fragmenting of the country into zones of influence. These zones are increasingly fluid as the unified direction of the Seleka insurgents and the anti-balaka militants itself fragments into baronies more affected by tribal and other local power structures and economic resource control (especially of diamonds, gold and pasturelands) than by religious loyalties per se.

The negotiations with the anti-balaka leaders sent a negative signal, potentially entrenching impunity and encouraging anti-balaka groups to believe they have the upper hand over the government. Several such groups have communicated their readiness for “another 5 December 2013” in Bangui (that being the date when anti-balaka groups attacked the capital in order to oust the Seleka-backed government of Michel Djotodia).  Calls for mobilisation from anti-balaka leaders in Bangui seem to be heard in the provinces; combatants there – notably in Bossembele, Bossemptele, and Bossangoa, all areas where former President François Bozizé, who was himself ousted by Djotodia earlier in 2013, retains influence – say they are ready to move on the capital again if necessary.

The former Seleka warlords, meanwhile, are also consolidating their positions, particularly in the north and east of the country, where various Seleka groups have, in effect, imposed their own administration. Police, customs officers and justice officials have fled most towns, leaving the Seleka to impose taxes and arrest and judge thieves. Djotodia still has an influence on some of the Seleka commanders, notably from the Gula tribe, but the former Seleka leadership has officially split into two movements: the Unity for peace in CAR and the People front for the CAR revival.

This fragmentation should not be equated with weakness, despite the fact that in some areas new armed groups are emerging (like the Revolution and Justice in the north west). Each individual fragment is working to consolidate its own power, economic as well as military, on a local basis. By multiplying the number of local power brokers, the increasing fragmentation of the armed groups makes humanitarian access more difficult and dangerous and will significantly complicate any negotiations. 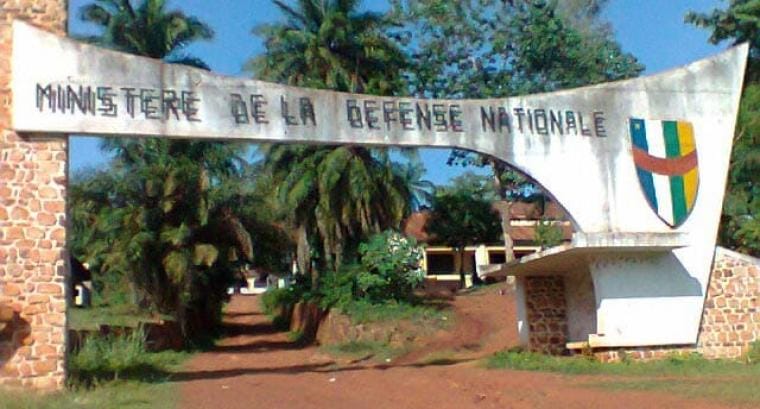 Entrance to the Department of Defence in the capital, Bangui. CRISIS GROUP

All the elements of a long crisis seem to be in place: a peacekeeping force which does not yet appear to deter violence; an ineffective transitional authority; disagreement among outside actors; impunity; and fragmentation of the armed groups. In order to unlock the present and dangerous stalemate, the international community needs to consider at least six hard questions:

While the UN is facing challenges to mobilise resources for its mission, the European Union is brainstorming about the follow-up to the EUFOR-CAR bridging mission (extended till March 2015), and the international contact group prepares to meet next week, these questions should be at the centre of discussions.