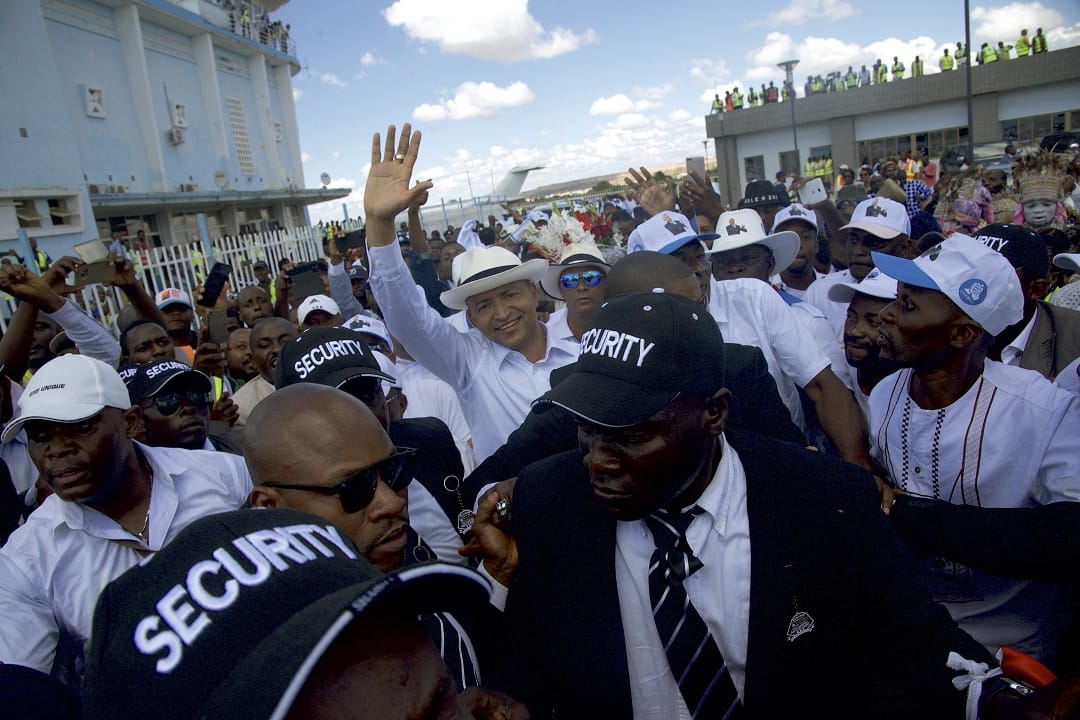 Democratic Republic of Congo opposition leader, former governor of Katanga Moise Katumbi waves as he arrives in Lubumbashi on 20 May 2019 after three years in self-imposed exile. AFP / Junior KANNAH
Q&A / Africa 23 May 2019

Who is Moïse Katumbi, and why has he returned?

Moïse Katumbi is one of the richest persons in the Democratic Republic of Congo (DRC) – and a political force to be reckoned with. A self-made man, he accumulated his wealth running mining and transport companies in the southern Katanga province. He is popular in Katanga, in part because he is president of a successful football team, Tout Puissant Mazembe, based in the provincial capital Lubumbashi.

Katumbi first fled the DRC to neighbouring Zambia in the chaos of the civil war in the 1990s. In the early 2000s, President Joseph Kabila, who had succeeded his father, Laurent, after his assassination in 2001, invited Katumbi back to the country to help him fix Katanga’s mining sector. Katumbi chose to return on 11 July 2003, to coincide with the date when the state of Katanga declared its short-lived independence – a period many Katangais still recall with nostalgia.

His political career took off in 2007 when he was elected Katanga’s governor. He boosted his popularity by contributing to the province’s economic development – targeting corruption, encouraging foreign investment and improving infrastructure. For years, he was a member of Joseph Kabila’s People’s Party for Reconstruction and Democracy. In the summer of 2015, however, he had a falling-out with Kabila after trying and failing to dissuade the former president from seeking a third term. (The Congolese constitution bound Kabila to a maximum of two terms, but he long sought ways to overcome this limitation.) In September of that year, Katumbi resigned as governor.

Many Congolese expected him to run for president in elections initially scheduled for November 2016. But in May, after the government accused Katumbi of hiring mercenaries in a coup plot, he fled the country again, this time to Belgium. He subsequently was convicted in absentia on separate property fraud allegations and sentenced to three years in jail. Katumbi has consistently denied all charges, calling them politicised. In August 2018, he tried to re-enter the DRC in order to submit his candidacy for president in polls that Kabila, after several delays, had finally slated for that December. The government denied him entry.

The legislative balance of power could shift further were FCC deputies to defect, whether out of political opportunism or for other reasons.

Ultimately, under pressure from African and Western governments, Kabila decided not to run for a third term. Instead, he sought to handpick his successor. That proved no easy feat. His preferred candidate, Ramazani Shadary, failed to win at the polls and a parallel vote count, widely regarded as credible, suggested that Martin Fayulu, an opposition politician backed by Katumbi, had prevailed in a landslide. Yet the Electoral Commission declared Félix Tshisekedi, another opposition figure, the winner. Kabila appears to have engineered victory for Tshisekedi, whom he viewed as less dangerous to his interests than Fayulu; Kabila and Tshisekedi reportedly struck an informal deal pursuant to which the new president gave his predecessor unspecified assurances about his future.

Under Tshisekedi, the DRC’s political space is opening up. In his inaugural speech he pledged to free political prisoners, close the secret police’s detention centres and allow exiled politicians to return. He has made some progress toward fulfilling all these promises. Katumbi has been one beneficiary: in late April, the Court of Cassation, the DRC’s supreme court of appeals, overturned the property fraud conviction. In May, prosecutors also dropped the coup plot investigation, paving the way for Katumbi’s return.

In keeping with his proclivity for historically resonant dates, he chose 20 May for his return to Lubumbashi, three years to the day since his exile, and a national holiday under the DRC’s long-time president, Joseph-Desiré Mobutu (1965-1997). Dressed in white – a colour he chose to symbolise peace – Katumbi arrived in Lubumbashi, where he was welcomed by tens of thousands of supporters, also wearing white, who proceeded to rally peacefully in the city centre. National and local media covered the homecoming favourably.

What impact will his return have on the DRC’s politics?

Tshisekedi could use an ally in pursuing his ambitious political agenda, and Katumbi arguably fits the bill.

The new president is struggling in the face of resistance by Kabila, who remains an important power behind the scenes. Though Kabila’s intended successor Shadary lost the presidential election, his Common Front for Congo (FCC) coalition won a parliamentary majority in the legislative contests, the results of which were equally disputed. The FCC’s several constituent groups control almost three quarters – 346 of 500 – of the National Assembly seats and the constitution mandates that the prime minister hail from the parliamentary majority’s ranks. It took Kabila and Tshisekedi four months to settle on a candidate before finally naming Sylvestre Ilunga Ilunkamba, a member of Kabila’s party and experienced politician, on the day of Katumbi’s return, diverting some attention from events in Lubumbashi.

Although Tshisekedi cannot come close to challenging the FCC’s majority even if he forges an alliance with Katumbi, he could nonetheless strengthen his position. Katumbi’s Ensemble is the largest opposition coalition, with at least 66 seats, and Tshisekedi’s Heading for Change alliance has at least 47. (Both could gain additional seats in Beni, Butembo and Yumbi where polls were postponed due to security concerns.) Moreover, the legislative balance of power could shift further were FCC deputies to defect, whether out of political opportunism or for other reasons.

In short, a Tshisekedi-Katumbi alliance might not carry immediate benefits for the new president but it would help balance Kabila’s overwhelming influence. Yet, although it would be more natural than his tense “marriage of convenience” (as press outlets have called it) with Kabila, it would represent a break from the recent past. 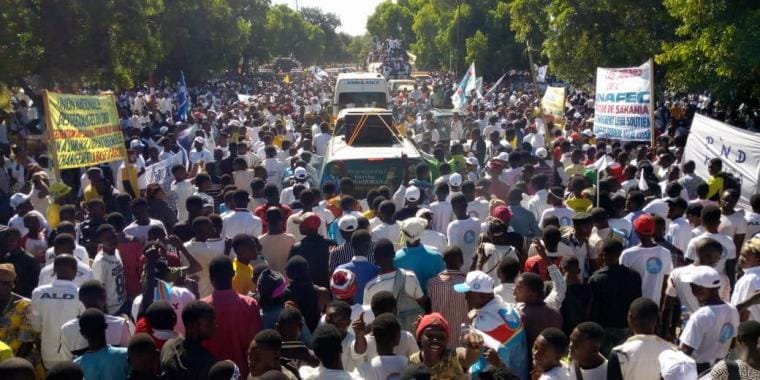 Katumbi was welcomed in Lubumbashi by tens of thousands of supporters, who proceeded to a peaceful rally in the city centre. Lubumbashi, 20 May 2019. CRISISGROUP/Paul Kaboba

Indeed, in a sign of friction between the two men, Katumbi backed Tshisekedi’s rival Fayulu in the 2018 presidential race. Along with other major opposition leaders, Katumbi and Tshisekedi had formed a coalition called Lamuka (“Wake Up”, in Lingala) to contest the elections. Lamuka decided to throw its weight behind the relatively unknown Fayulu as its presidential candidate. But Tshisekedi broke ranks shortly after the coalition was formed, under pressure from his party, the Union for Democracy and Social Progress, to run separately. Fayulu, convinced that he was robbed of his victory, has maintained his call for new elections and for Tshisekedi’s resignation.

In an interview with Crisis Group on 15 May, Katumbi said he saw no point in being too hard on Tshisekedi. “The enemy of the population is not the one who won the elections, but the one who organised them”, he explained. While refraining from overtly supporting Tshisekedi, he praised the new president for his work to protect freedom of expression. Referring to the Court of Cassation decision, he maintained his innocence and rejected the idea that the court’s decision to rescind his conviction was politically motivated. Importantly, he stressed the importance of separating Tshisekedi from Kabila and avoiding pushing the president into his predecessor’s arms. He sounded the same note while addressing the crowd in Lubumbashi on 20 May, when he urged Kabila to afford his successor some space, using the metaphorical phrase “un véhicule ne peut pas avoir deux chauffeurs (a car can’t have two drivers)”.

What does Katumbi’s return mean for the Congolese opposition?

With Katumbi now serving as its rotating head, Lamuka is still projecting a united front. But it is unclear how long this can hold. The coalition featured Katumbi’s return prominently on Twitter, and in interviews announcing his return he reaffirmed his commitment to the opposition coalition. He likewise has made clear that he would not join the government. Still, when he spoke to Crisis Group, Katumbi said he has advised Fayulu to forget the past and move forward, because his demand for new elections is untenable. He cited this stance as evidence that he is “un homme pragmatique (a pragmatic man)”.

Lamuka’s other major figure is Jean-Pierre Bemba, Kabila’s vice president from 2003-2006. Bemba was also barred from running in 2018 and likely continues to harbour presidential ambitions. On 13 May, with Fayulu by her side, Eve Bazaiba, secretary general of Bemba’s Movement for the Liberation of the Congo, announced that Bemba would also be returning to the DRC within three weeks. His homecoming may further strain the coalition. Like Katumbi, he will tour the DRC’s 26 provinces in the coming months. Whether he will do so with Katumbi or with Fayulu has not been confirmed.

The DRC’s political landscape remains fractured, with shifting alliances and ongoing tactical manoeuvring. This presents the president with a dilemma: enjoying only a relatively weak base of support, he will need to look to the opposition to bolster his presidency’s stability; yet the main opposition figures also have their own ambitions and, if given significant space, could quickly become powerful contenders in the 2023 election.