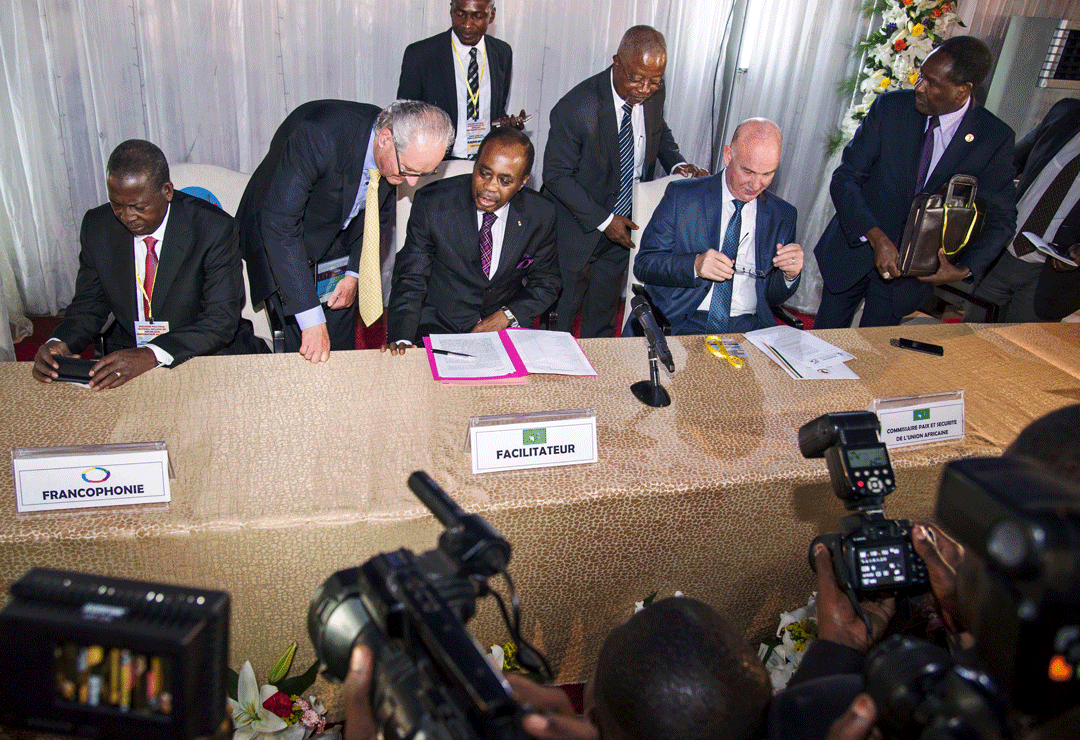 Major powers and the Congolese opposition are losing patience with the DRC leadership’s attempt to stay in power illegitimately beyond December. International Crisis Group urges all to focus on the dialogue, pressures and encouragement needed for a non-violent transition.

The Democratic Republic of Congo (DRC) faces a crisis that could have grave implications for the country itself, the region and the international community’s legacy in DRC. The Kabila regime’s desire to stay in power beyond its constitutional time limit risks undoing the gains of over ten years of relative peace. The political dialogue started on 1 September was tasked with producing a roadmap to get to elections, but its outcome is as yet unclear. The international community needs to use all its diplomatic and financial tools to help the Congolese find a solution before 19 December, when Kabila’s second and last term permitted by the constitution expires.

Few across the Kinshasa political spectrum have much faith in the dialogue as currently configured. Lack of clarity over selection of participants, uncertainty over agenda and poor public communication are the main concerns. With fewer than 300 participants, the dialogue is not large enough to serve as a forum to air national concerns, but too large for the main actors to strike the necessary deals. Important political opposition groups remain outside. Civil society is split on participating, which has led to acrimonious charges of selling out or blocking much needed dialogue. The Catholic Church, seen by many as the most credible moral arbiter, is taking part but saying it will walk out if the outcome strays from respect for the constitution. However, a Twitter statement on 14 September by the African Union (AU) facilitator Edjem Kodjo hints at an agreement for all elections (provincial, legislative and presidential) to be held on the same day. This would be an important undertaking to avoid excessive delays, but it is not in itself a comprehensive solution.

Underlying these problems are real issues of political polarisation. Animosities are exacerbated by the regime’s tendency to go after dissenters from its own camp by manipulating the judiciary, as Crisis Group highlighted in its August report on political confrontations in the former Katanga province. Entourages, which have much to lose, pressure regime members to keep power by any means despite constitutional requirements for elections and clear provisions against President Joseph Kabila standing for a third term. Opposition figures face popular pressure to take a hard line, but also fuel and exploit popular discontent to their own ends. Deep discontent with the regime, illustrated during a recent international football match in Kinshasa when at least parts of the stadium erupted into chants of “Kabila must go”, is fast becoming a major factor in negotiations.

If progress is to be made following the dialogue due to end in the next week or so and well before 19 December, maximalist positions must be softened and compromises reached. Risks are twofold: that parties camp on their hard lines, or the opposition, or parts of it, enter a transitional government with insufficient undertakings concerning the transition’s end point. The latter could produce explosive anger against government and opposition alike. Equally, and most likely, the opposition could split, some angling for jobs, others looking to the street to pressure the government. That would hinder coherent negotiations and delay a workable resolution.

All signs are that the regime is determined to hang on and avoid an election. Clinging to power in the short term, however, would leave those around Kabila with fewer and fewer options when it comes to eventually finding a way out of the deteriorating situation. In the longer term, it would be a dead end that serves no one.

The stakes are high. An arrangement needs to be in place by the second half of December that firmly focuses on the need to organise elections within a specified and tight timetable. In this special period, those in power should not have carte blanche to act as they have done until now. International actors should encourage Congo’s politicians to seek a compromise, but not one that leaves the population again the victims of its political class, which could have serious consequences in terms of street violence. This requires nuance and flexibility, cajoling actors to join talks when appropriate and upping the pressure if those talks seem headed for a dead end.

The international community needs to use all its diplomatic and financial tools to help the Congolese find a solution before 19 December, when Kabila’s second and last term permitted by the constitution expires.

While some Congolese politicians may overestimate foreign leverage, international views are taken seriously. Neighbours and regional actors such as South Africa can have a strong influence, and the positions of the wider international community also factor into political calculations. Economic mismanagement and the general drop in commodity prices have combined to cause a crisis of public finances and further increase corruption, but repression and political uncertainty have made the World Bank and IMF unwilling to bail out the regime with extraordinary budget support. This is, however, unlikely by itself to be sufficient to bring about real change by a resistant political class.

Sanctions could increase the pressure. They can have diminishing returns, hold no guarantee of changing the fundamentals, as seen in nearby Zimbabwe, and risk emboldening the opposition to take more radical positions, including street protests that would tempt the regime to use force. However, those that target individuals, such as recently imposed on Kinshasa police chief General Kanyama, can have a deterrent effect and temporarily calm the most egregious abusers. They can limit regime options and thus the potential for escalation if tensions rise and confrontation moves to the street. Separately, as several lobby groups recommend, there is a moral argument for financial sanctions against individuals who have looted the country over the last decade and stashed their money abroad. They might also help fight impunity if they are, as they should be, integrated into a coherent strategy to contribute to calming tensions.

The presence of the world’s largest UN peacekeeping force presents opportunities as well as challenges. Peacekeepers would struggle to protect civilians if the regime cracked down violently on opponents or protesters, but continuing UN troop and police presence in potential hotspots could deter security forces from committing abuses against the population, and the mission’s monitoring and good offices will remain important. President Kabila has consistently played the nationalist card by demanding that the UN reduce the force, but it is not clear that withdrawal, particularly of the Force Intervention Brigade, would actually serve his interests. Indeed, the threat of pulling out could provide additional international leverage.

Following years of frustration, some major powers such as the U.S. seem to be losing patience with the country’s leadership, sharing Congolese domestic anger at its attempt to stay in power illegitimately amid increasing evidence of its incompetence and greed. This is understandable, but it must be operationalised in a comprehensive strategy that both pressures and encourages the regime to pursue genuine negotiations aimed at political transition rather than further confrontation. International actors, including the special envoys, need a common, consistent and coherent stance that keeps their own channels for dialogue open with regime, opposition and civil society alike and moves all of them toward elections and a non-violent transition consistent with fundamental democratic values.

A Dangerous Escalation in the Great Lakes