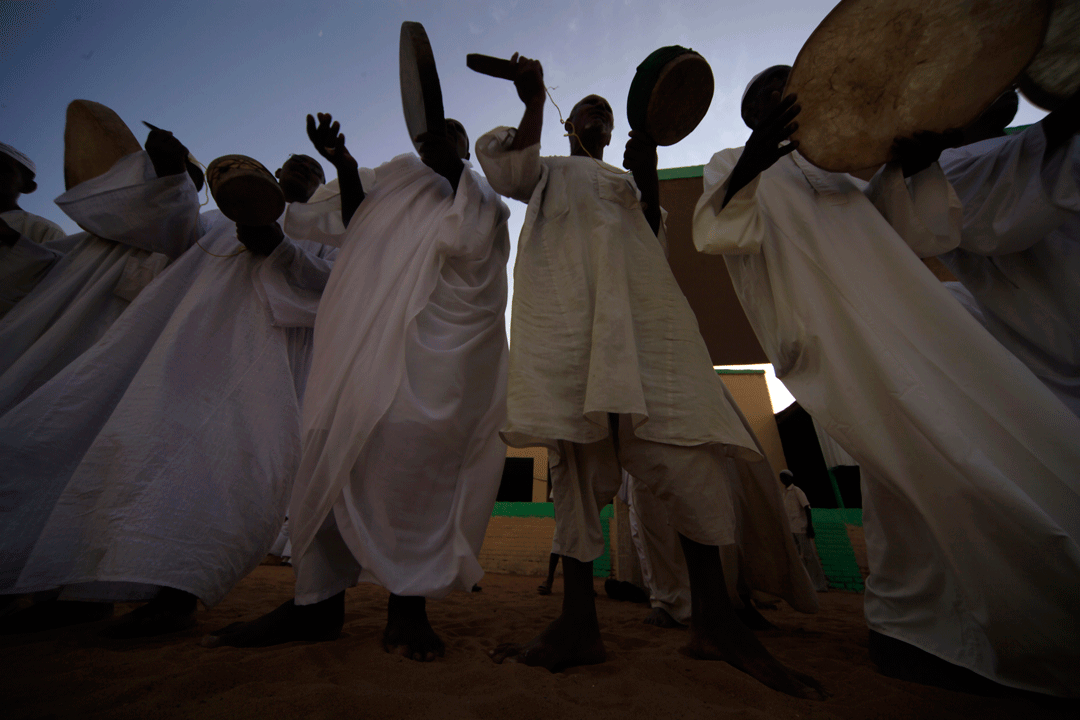 Sufis perform before breaking their fast on the first Friday of Ramadan in a mosque at Umdowan Ban village outside Khartoum, 11 August 2011. REUTERS/Mohamed Nureldin Abdallah
Commentary / Africa 15 September 2015

Many paths have been tried to counter the appeal of violent religious extremism in East Africa. In the Muslim community, traditional Sufism is being increasingly viewed as an important new way. But it should be followed with caution, since official embrace of just one religious custom can never be the only road.

A new engagement emerged from a meeting of Sufi clerics and activists from East and Central Africa who organised a three-day conference in Mackinnon, a small trading centre on the Mombasa-Nairobi Highway in late August to discuss ways of countering violent extremism (known as CVE). Some 300 delegates representing Sufi orders (tariqas) from Kenya, Somalia, Tanzania, Uganda, Ethiopia and DR Congo attended the meeting dubbed “The International Sufi Conference for East Africa”.

Among the keynote speakers were the Grand Mufti of Ethiopia, Abdullahi Sharif Ali, and Sheikh Abdulkadir al-Ahdi, a Sufi scholar from the coastal town of Lamu, considered by many the seat of the purest Sufi culture in East Africa. Participants agreed on the need for Sufis in East Africa to step up efforts to tackle youth radicalism in East and Central Africa in cooperation with regional states.

This was a historic event, signaling the intention of an important Muslim constituency to join the struggle against violent extremism. In the battle of ideas against violent extremism, Sufism offers great potential. Its ecumenical and pluralistic vision of Islam offers the perfect antidote to Salafi exclusivism, puritanism and intolerance. With its deep repository of spiritual and philosophical teachings and moderate traditions, it offers an alternative vision to that of extremists.

The Kenyan government, for which CVE now sits at the top of the agenda after a series of devastating attacks, is believed to be instrumental in the efforts to mobilise Sufis and followers of the four orthodox Sunni Islam mazhabs (Shafi’, Hanafi, Hanbali and Maliki sects). Nairobi hosted a major international conference on CVE in late June in a bid to galvanise regional and international support and seek the input of civil society in crafting a strategy.

The attempt to rally Sufis in the struggle against extremism seems attractive, but the government ought to be aware of potential pitfalls. In embracing Sufism it may, inadvertently, be opening itself to charges of creating an “official” Islam designed to “correct” a form of Islam deemed “distorted”. This would invariably deepen sectarian divisions and alienate non-violent Salafis – the single most important constituency whose support is critical in defeating jihadism.

The government is constitutionally bound to remain neutral and must resist the temptation to micro-manage Muslim affairs. Its role and intervention must be deliberately aimed at fostering cohesion and an impartial, concerted response.

The Sufi counter-narrative is important, but any increase in negative messaging will be counterproductive. Many Sufi spokesmen are increasingly adopting the brutal polemical style of their Salafi adversaries. In Somalia, in particular, the standard discourse in one of mutual takfirism (denouncing the other as “apostate”). To simply condemn Salafis, or even Salafi-jihadis, as deviants or apostates is unlikely to win over young Muslims.

The attraction of Salafism lies in the simplicity and accessibility of its theology; its absolute certitude; its disdain for hierarchy and intermediaries; and its emphasis on active faith. The true believer is not simply preoccupied with individual salvation; he or she is also an active agent for social change and for creating Dar ul Islam – a polity governed by sharia. It is these latter qualities that have allowed Salafism to tap youthful idealism effectively and attract idealists impatient for social reform and revolution. Salafi dominance in political, social and economic spheres is in no small part a function of this activist view of faith.

Sufism, on the contrary, is a complex spiritual tradition whose form of mysticism and metaphysics may not be easy to grasp, especially by the young. In East Africa, pockets of Sufi traditionalists have survived and remain resilient, even though the number of active Sufi communities have shrunk. These include Lamu, on the Kenyan coast and central Somalia.

Historically, Sufism has resisted mass conversion and favoured individual aptitude and voluntarism. The premium is on self-knowledge, enlightenment, and life experience – qualities that have traditionally attracted people advanced in age. Sufism has fostered quietism and a conservative outlook, and it will be interesting to see how its followers intend to recast it for a younger generation.

But more important to the CVE debate is the mistaken tendency to conflate Sufism with Ahlu Sunnah Wal Jammah (the followers of the four orthodox Sunni schools of jurisprudence). It is of course possible to be orthodox and be a Sufi. But, historically, the relation between Sufism and orthodoxy has not always been one of easy cohabitation and Sufi literature is full of commentaries that rail against “ossified” orthodoxy. Adopting the Sufi moniker is today convenient, unifying and, perhaps, expedient for groups keen to attract donor funding, but in itself explains little.

A CVE strategy based exclusively on harnessing Sufism is therefore fraught and unlikely to be effective in the long run. The government ought to be clear its CVE objective is limited and its desired outcome twofold: to reduce the number of young men and women incited to violence by extremist ideas; and – without taking any religious sides – to encourage values like promote tolerance, respect, solidarity and peaceful coexistence.

With that in mind, the outreach strategy ought to be one that is inclusive. In this respect, nothing is more imperative than to engage conservative Salafis opposed to violence. Building such a partnership will allay sectarian fears, improve intra-Muslim cohesion; create a broad alliance critical for long-term success; isolate the extremists and enhance the chances of a consensus on moderate values and wider reforms to undermine jihadism.

The growing hostility to Salafism and its wholesale demonisation is unhelpful. While it is true that much of the modern Sunni jihadism and extremism is inspired by virulent strains of Salafism, there is little historical and contextual evidence to support the notion that the theology is inherently violent. Salafism has always been diverse and its evolution as incongruous as that of other movements. In its home soil in the Gulf it has learnt to blend pragmatism with conservatism and cohabits with modernity with ease.

The notion of an absolutely flawed and inflexible theology is thus a misreading. In fact, Salafism’s problem is its relatively unstable nature. This is because of its anticlericalism, its disregard for competent mediatory and oversight authority (marja’iyah) to offer proper guidance and “correct” interpretation. Salafism is thus a faith of the laity, constantly open to radical reinterpretation. The positive flipside is that this “structural flaw” may actually be its strength – allowing for the flexibility to reinterpret its doctrines in a way that will allow its adherents to join Sufi, orthodox and other Muslims in marginalising those people who resort to violence.

To mark the end of Season Three of The Horn, Alan discusses a few major developments in the region with Crisis Group experts. First up, he speaks to William Davison, Senior Analyst for Ethiopia, to discuss the prospect for possible peace talks in Ethiopia after the humanitarian ceasefire declared in March between federal and Tigrayan forces. They discuss the recent welcome steps towards peace talks, the remaining hurdles towards holding such negotiations and the major obstacles that any peace talks will need to overcome. They also discuss Ethiopia’s deteriorating economic situation and the ongoing insurgency in the Oromia region.

Next, Alan speaks with Nelleke van de Walle, Project Director for the Great Lakes region, to discuss Kenya’s recent diplomatic foray in the eastern DR Congo and how it is reshaping regional politics. Alan and Nelleke discuss the factors behind the warming ties between Kinshasa and Nairobi and the reasons for Kenya’s recent initiatives towards the DR Congo. They discuss the proposal for the East African Community to deploy a joint force under Kenyan command to fight armed groups in the eastern DR Congo, and they unpack the recent peace talks Nairobi hosted between Congolese authorities and armed groups. They also chat about how the looming presidential election in Kenya could impact Nairobi’s future diplomatic role.

Finally, Alan talks to Nazanine Moshiri, Senior Analyst for Climate & Security in Africa. They break down the impact of the devastating historic drought hitting much of the Horn region. Nazanine explains which parts of the region are worst hit and outlines how this crisis is exacerbated by the global commodity shocks, which are driving up food prices as well. They also highlight the worrying repercussions, from major displacement to land disputes and intercommunal conflict. Back from recent visits to the northern Great Rift Valley and Laikipia county in Kenya, Nazanine talks about how the drought is upending life there and how the climate shocks are intermixing with rising political tensions and violence ahead of Kenya’s elections.

We want to hear from you! As Season Three of The Horn draws to a close, if you have any feedback or suggestions for topics you’d like us to cover next season, you can write to podcasts@crisisgroup.org or get in touch with Alan directly on Twitter, @AlanBoswell.