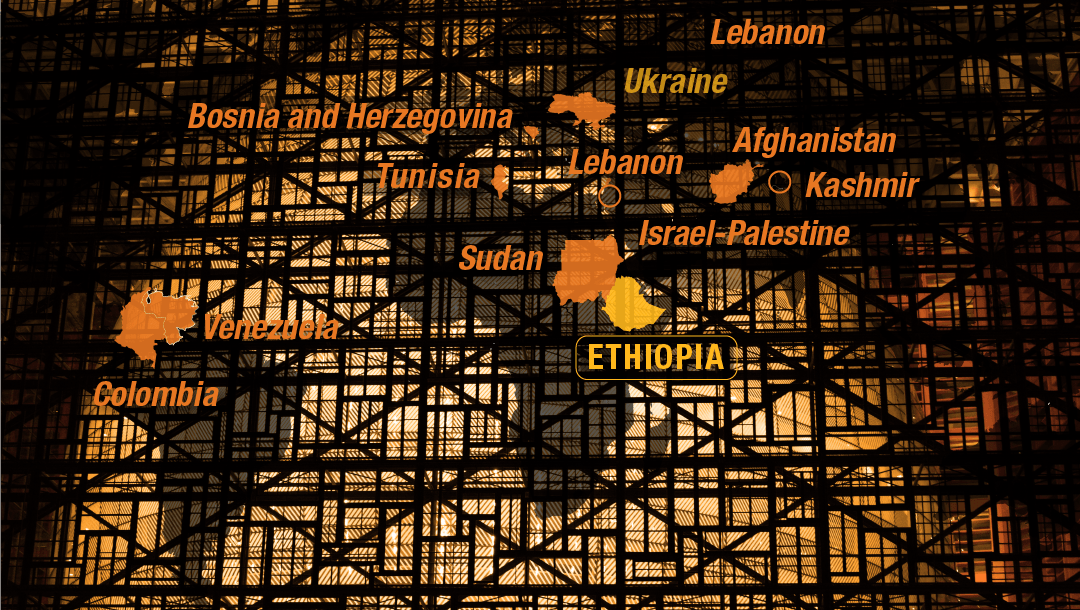 Ethiopia's civil war continues between federal authorities and Tigray’s regional government, killing tens of thousands so far. In this excerpt from the Watch List 2022, Crisis Group urges the EU and its member states to support the federal government’s efforts by continuing to suspend budgetary support to Addis Ababa and development cooperation with Eritrea to alleviate rising tension and violence.

Ethiopia enters 2022 at an impasse in its civil war that opens a narrow window for peace. The conflict between the federal authorities and Tigray regional government has devastated the country’s north, leaving tens of thousands dead. In November 2020, political discord led to armed confrontation, with federal units, allied forces from Amhara region, which neighbours Tigray, and Eritrean troops moving into Tigray. A year later, Tigray’s forces aided by Oromo rebels appeared set to march on the capital Addis Ababa. A counter-offensive by the federal coalition compelled Tigray’s fighters to retreat to their home region in December 2021. Neither side has been able to fully defeat the other. The see-saw battle and accompanying carnage are likely to continue unless leaders in Addis and Tigray’s capital Mekelle rethink, stop assembling reinforcements and give talks a chance. Both sides made de-escalatory moves in December, but formidable obstacles to a settlement remain, not least territorial disputes in southern and western Tigray – the latter also implicating neighbours Eritrea and Sudan – and mistrust on all sides.

To help steer the parties toward a negotiated resolution, the European Union (EU) and its member states should:

Fifteen months of civil war have sown deep misery in Ethiopia’s north. Yet a bright spot unexpectedly emerged when the belligerents paused major offensive operations at the end of 2021. In a 19 December letter to UN Secretary-General António Guterres, TPLF leader Debretsion Gebremichael announced that Tigray’s forces had withdrawn northward, calling for an inclusive dialogue and international action to protect the region. On 22 December, federal authorities said they would halt advances into Tigray as they press ahead with national dialogue plans. Although these were only small steps toward peace, they marked a welcome shift away from outright aggression.

Still, the lull may not last. Tigray’s forces fought in part to end a blockade Addis Ababa reimposed on the region after federal and allied troops departed in June. Millions of Tigrayans urgently need food and medicine, and Tigray’s commanders have signalled they will keep fighting until the federal government restores trade, aid and services. Territorial disputes meanwhile fester in western and southern Tigray, which neighbouring Amhara region took over at the war’s onset. Eritrea, a longstanding enemy of the TPLF, has also stationed troops in the area, as well as in Tigray’s north east. Eritrea’s presence in Tigray and atrocities its soldiers have committed against civilians have fed secessionist sentiments among Tigrayans who feel betrayed by their compatriots for allying with Eritrea against them. Eritrean officials, Amhara’s regional government and some Ethiopian opposition parties continue to press Addis to disarm Tigray by force, with any such move likely to entail more conflict.

Trouble is simmering elsewhere, too. Ethno-nationalist insurgencies in the Oromia and Benishangul-Gumuz regions have killed thousands in recent years. Near the start of the Tigray conflict, Sudan’s military seized swathes of fertile borderland, evicting thousands of Ethiopian farmers, a move that continues to anger Addis. Meanwhile, the federal government is still at loggerheads with Sudan and Egypt over the giant dam it is constructing on the Blue Nile.

What the EU Can Do

As Crisis Group and others have long argued, the ethno-political fault lines dividing Ethiopia can be sustainably bridged only at the negotiating table. Federal authorities intend to facilitate a national dialogue, though the details have yet to be determined, leaving outstanding the crucial question of who will participate. Working with other international partners, the EU and its member states should encourage federal authorities to make the process fully inclusive. In particular, European actors should urge the government to grant amnesty to all remaining jailed political leaders for terrorism and similar alleged offences. Building on welcome releases in early January, the amnesty should include Tigray figures as well as the other top Oromo opposition politicians whose imprisonment has fed a burgeoning insurgency in Oromia, the country’s most populous region. Addis Ababa should make clear that these released leaders need to be part of the dialogue.

The EU and its member states should also caution the authorities about the risks of using the dialogue to unilaterally usher in constitutional reforms on explosive matters such as regional autonomy and the role of ethnicity in politics, as such moves could elicit violent backlash from any actors that are excluded from the process. Any potential constitutional change should be preceded by an inclusive debate involving the full spectrum of Ethiopian political society and should only be implemented in strict conformity with the existing constitution. For their part, opposition representatives, including armed groups, should agree to engage in political negotiations without imposing conditions first. Brussels should urge the opposition in this direction.

While relations between Addis Ababa and Brussels have sunk since the EU froze budget support in December 2020, and subsequent U.S. sanctions have made Abiy disinclined to take counsel from Western partners, Ethiopia needs donor support. The civil war is heaping pressure on state coffers, jeopardising Abiy’s economic reforms. Hence, Brussels could have some influence. Senior EU officials who retain access to Abiy, including Commissioner for International Partnerships Jutta Urpilainen and Special Representative for the Horn of Africa Annette Weber, should continue to impress on the government that renewal of EU budget support hinges on Addis ending restrictions on humanitarian access to Tigray and other conflict-affected areas, achieving a ceasefire and embracing dialogue with all its opponents along the lines described above. European officials should also urge those countries arming Abiy’s government to lend their weight to calls for a peace process, while continuing to freeze cooperation with Eritrea until its forces withdraw from Tigray.

EU and member state representatives should urge the federal government to reverse repressive measures, while supporting investigations of atrocities.

EU and member state representatives should urge the federal government to reverse repressive measures, while supporting investigations of atrocities. With full-scale hostilities paused, the authorities plan to end the national state of emergency that the government imposed on 2 November, which, among other things, has had a chilling effect on local NGOs assisting people in need. (Their employees, aid workers told Crisis Group, worried that the measure heightened the risk of arrest for supporting banned groups.) European officials should encourage federal authorities to release all of the thousands of mostly Tigrayan and Oromo civilians who have been detained without charge under emergency regulations, and to support existing investigations by the African Commission on Human and Peoples’ Rights and UN commission of experts on human rights on Ethiopia as a means of pursuing accountability for atrocities. Such atrocities include the sexual and gender-based violence that the belligerents have reportedly used as a weapon of war.

To the extent they enjoy channels to armed opponents of the federal authorities, the EU and member states should press these actors to show greater flexibility as a step toward a return to peaceful political competition. As well as recognising the Abiy administration’s legitimacy, Tigray’s leadership should embrace serious federal offers of negotiations, if those are forthcoming, rather than use a prospective truce to prepare new offensives. They should call off any planned military operations to allow meaningful dialogue to develop. Tigray’s leaders could also release prisoners of war to build trust. Likewise, the Oromo Liberation Army (OLA) should halt its insurgency in Oromia as the authorities release remaining jailed opposition leaders and show a genuine commitment to inclusive dialogue, which would go some way toward assuaging Oromo nationalist concerns. In return, the federal parliament should remove terrorist designations from the TPLF and the OLA.

Ethiopia’s civil war has been fought at a terrible cost. Unless the protagonists embrace this rare chance to start negotiations, the country faces more fighting that would further destabilise not just Ethiopia but its neighbours, too. The EU and its member states should work with regional and other powers to urge the belligerents to end this ruinous conflict.

Eight Priorities for the African Union in 2022

A Rare Chance for Peace in Ethiopia