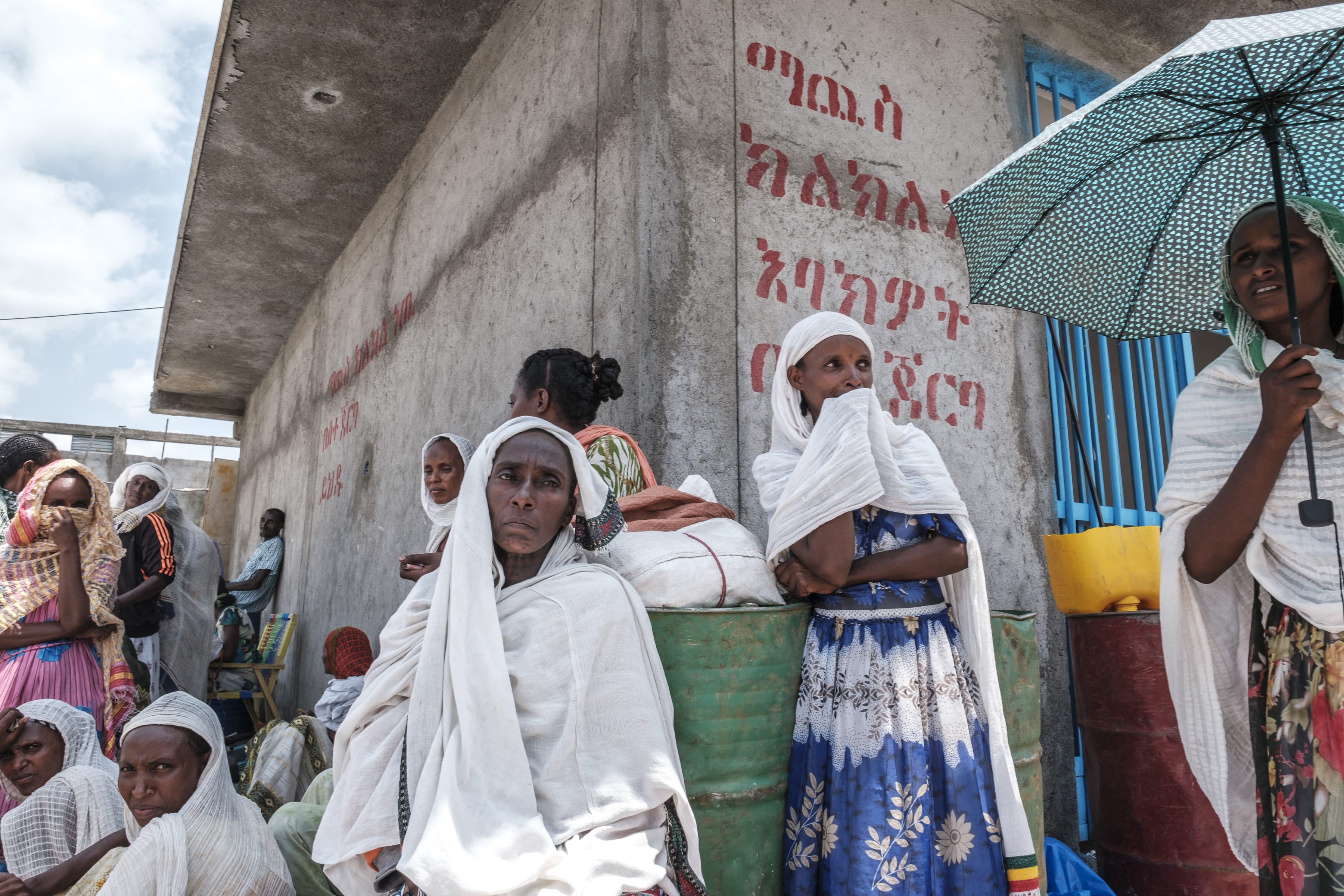 Women wait during a food distribution organized by the Amhara government near the village of Baker, 50 km southeast of Humera, in the Tigray Region of Ethiopia, on July 11, 2021. EDUARDO SOTERAS / AFP
Statement / Africa 23 December 2021

A Rare Chance for Peace in Ethiopia

Tigray’s leaders have withdrawn their forces from neighbouring regions and called for a cessation of hostilities followed by negotiations. Ethiopia’s federal government should grasp this opportunity to end the fighting, while international actors should step up to provide support for talks.

On 19 December, the leader of Ethiopia’s northern Tigray region announced that Tigray’s forces would pull back to their home region, marking yet another significant turnabout in Ethiopia’s brutal thirteen-month civil war. Tigray’s leadership said they had taken the decision to open space for negotiations. Addis Ababa, meanwhile, asserted that its counter-offensives had succeeded in pushing Tigray’s forces back. The latest shifts – and particularly the Tigray leader’s call for talks – afford a rare chance for a cessation of hostilities that all parties must seize. All should stop shooting immediately. In a welcome move, the federal government responded on 22 December by saying it will not push further into Tigray to try to completely defeat the resistance. It should now abide by its international obligation to facilitate aid to the famine-hit region. African Union, U.S. and European Union envoys, as well as the UN Secretary-General and Kenyan officials – who have all been trying to end the carnage – should redouble efforts to encourage the above actions and get to a peace process.

After appearing on the cusp of a march on Addis Ababa following gains in November, Tigray’s forces have suffered battlefield setbacks in recent weeks. Mobilisations by federal forces and their allies appear to have been key factors, along with drone strikes, in compelling Tigray’s leaders to call off their southward advance on the capital. Instead, they enacted a major withdrawal, which their forces completed in recent days, returning to Tigray after leaving the strategic crossroads city of Weldiya in north-eastern Amhara and other surrounding areas.

Senior Tigray contacts told Crisis Group a reason for the retreat is to ensure they have enough forces in Tigray to guard against what they describe as a renewed threat from Eritrea’s military, which joined the federal-led operation that removed Tigray’s ruling party, the Tigray People’s Liberation Front (TPLF), from power in November 2020. By thus concentrating forces, say sources close to Tigray’s commanders, they would retain the flexibility to launch various offensives, as well as protect their home region. Tigray’s government said by removing troops from Amhara and Afar regions, they hope to catalyse a peace process that has been elusive so far during a bitter conflict in which at least tens of thousands of fighters and civilians have died.

Significantly, the dissident regional government has dropped the return of lost territory in contested western Tigray as a precondition for talks, potentially opening the way for negotiations. Regional head Debretsion Gebremichael indicated in a 19 December letter to UN Secretary-General António Guterres that Tigray’s leadership now favour an undefined UN mechanism for ensuring that Eritrean troops and forces from the neighbouring Amhara region withdraw from western Tigray. Amhara’s government lays claim to the Sudan-bordering district and occupied it in the war’s first few weeks. Addis Ababa and Amhara region are unlikely to accept any sort of UN role, but the shift in Tigray’s position at least removes one of the most prominent obstacles to negotiations.

A senior source from the national ruling Prosperity Party told Crisis Group there is fresh appetite in Addis Ababa to stop the fighting, although elites remain divided over a way forward. The source said a peace process would involve reconnecting Tigray, which is now cut off from aid, trade and vital federal services such as banking, to the rest of Ethiopia. It could also mean rehabilitating the TPLF, which parliament classified as a terrorist organisation in May, and possibly including it in a forthcoming National Dialogue. The interlocutor went on to say a federal operation to fully re-enter Tigray is unlikely, as more and more federal officials accept the need for a political rather than a military solution. Their concern is partly not to worsen Tigrayan civilian suffering and partly not to push Tigray any further toward secession. With the federal government’s 22 December announcement that it has halted its military operations, there is a real chance that talks will follow.

For sure, challenges to a negotiated resolution still exist. First, fighting did not end with the Tigray forces’ northward retreat. Hostilities continued in southern Tigray, a hotspot that is claimed by Amhara. Federal and Amhara forces are reported to have captured Alamata, the area’s main town, and the government first said on 22 December they are pushing north to Korem along the main road to Mekelle, Tigray’s capital. Secondly, Amhara forces are determined to hold onto disputed areas in western Tigray they seized early in the war and that is unlikely to change even with a UN mechanism. The Ethiopian and Eritrean governments also remain unwilling to allow Tigray’s forces access through those areas to an external supply line to Sudan. Lastly, federal officials suggest Tigray will have to disarm, as its forces pose dangers and committed atrocities during their offensive. Tigray’s leaders, who believe the region faces an existential threat from its neighbours, will reject any such suggestion. The warring parties, rather than letting this delicate issue prevent talks, should deal with it incrementally as part of a wider dialogue.

Prime Minister Abiy Ahmed is still in a tight spot. He has received a political boost from the battlefield gains and the apparent success of his effort to marshal popular resistance against Tigray’s forces. Although some in his camp are said to be inclined to give peace a chance, they will likely face stiff opposition from Amhara and other ruling elites who still hope to deal a death blow to Tigray’s forces. Abiy would be well advised to ignore the latter opinion and embrace the option of dialogue, as his government appears to be doing. Ethiopia has paid a catastrophic price in the course of this hard-fought war. Moreover, there may still be further battlefield twists. Tigray’s forces command enormous support at home and will seek to resurge unless negotiations get under way. Peace talks could help set Ethiopia on the path to reconstruction and avoid a metastasising conflict that would further destabilise the Horn of Africa’s key state.

The two sides should take a number of steps to get to talks. They should strike a cessation of hostilities deal as soon as possible. The Tigray and federal governments should recognise each other’s legitimacy, as an initial measure to build good-will. The federal government should comply with its obligations under international law and facilitate aid and restore services to Tigray as it extends support to the hundreds of thousands also affected by conflict in Afar and Amhara. It should push ahead with an amnesty for jailed political leaders, which is reportedly imminent. That would include Oromo figures such as Jawar Mohammed, raising the prospects of a return to dialogue as a way to sap support from the Oromo Liberation Army, an insurgent group in Oromia region, Ethiopia’s most populous. That support has grown in 2021 since Oromo opposition parties boycotted elections, citing widespread state repression. It should also free the many thousands of mostly Tigrayan and Oromo civilians who have been detained without charge under emergency laws introduced on 2 November.

International actors should immediately move to exploit the window for peace by encouraging the parties to pursue talks.

International actors should immediately move to exploit the window for peace by encouraging the parties to pursue talks. In the letter to Guterres, Tigray’s government called for a no-fly zone over the region, which the federal military is still bombing, and arms embargoes on the Ethiopian and Eritrean governments. The UN Security Council is unlikely to authorise any of these measures, given objections from China, Russia and other member states. Still, the African Union’s Horn envoy, former Nigerian President Olusegun Obasanjo, could take the lead in preparing a joint statement welcoming recent moves to end active fighting and calling for a formal cessation of hostilities and negotiations. Such a letter should be co-signed by the Horn’s regional bloc, the Intergovernmental Authority on Development, the Kenyan government, Secretary-General Guterres, EU Special Representative to the Horn of Africa Annette Weber and U.S. Horn envoy Jeffrey Feltman. All these parties could state their readiness to support talks.

All outside powers, especially those that have been arming the federal military with drones and other hardware, should lend their backing to a peace process rather than fuel further war. All have an interest in seeing an end to the hostilities tearing apart a country crucial to the region’s stability.

Ethiopia’s civil war has sown devastation in much of the country’s north, killed tens of thousands, uprooted an estimated two million from their homes and left more than nine million facing acute hunger. The country’s economy is in trouble, with rising inflation meaning the war’s pain extends well outside Tigray. Given the conflict’s political roots, actors on all sides should now take bold steps to bring the fighting to a close – even if that means upsetting some of their allies. More war will only mean continued horror, with destabilising consequences for Ethiopia and, potentially, the Horn of Africa as a whole.