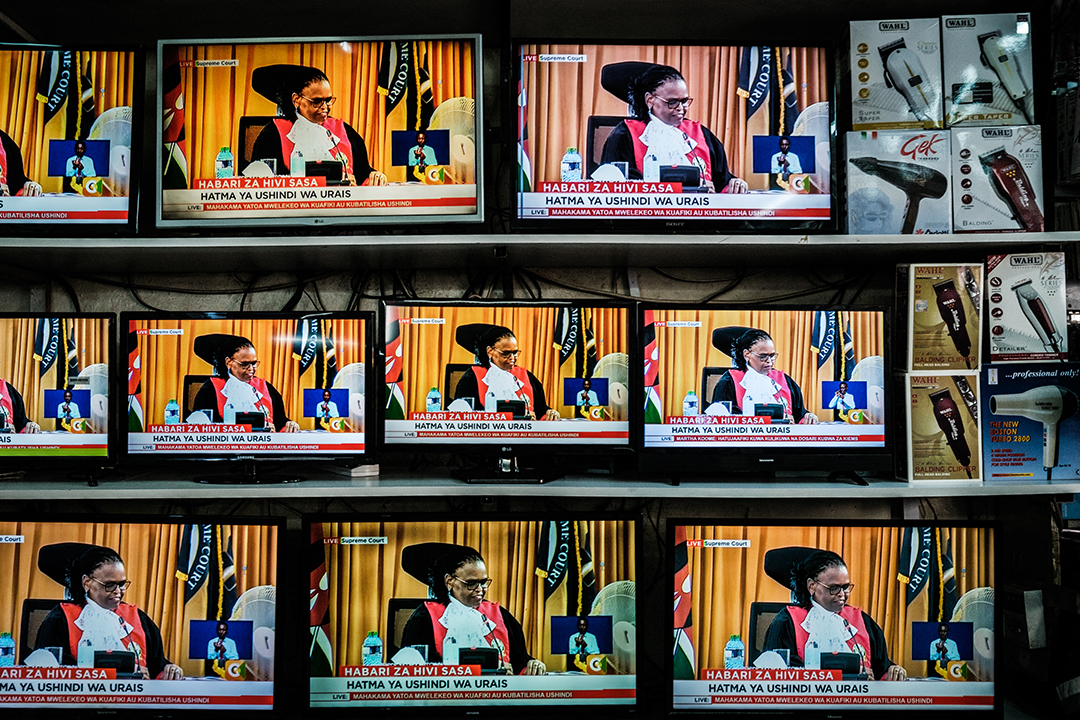 After weeks of uncertainty, Kenya’s Supreme Court has unanimously upheld Deputy President William Ruto’s win in the 9 August presidential election. On 5 September, the judges rejected allegations of irregularities presented by lawyers for Raila Odinga, the long-time opposition figure who was runner-up to Ruto. They said Odinga had failed to support his claims of ballot stuffing and external interference with the tally, concluding that Ruto’s election was valid. The highly anticipated judgment capped a peaceful and transparent campaign that, despite shortcomings, represents a significant achievement in a country where violence has marred previous polls and where public trust in electoral institutions has historically been low. The decision also cemented the Kenyan judiciary’s role as an arbiter of electoral disputes and underscored its independence. Kenya should now build on this election’s high standard to further strengthen the electoral commission and bolster its credibility, so that electoral turmoil may become nothing but a distant memory.

The presidential vote was a hard-fought contest involving three of Kenya’s political giants. It pitted Odinga, who was hoping to prevail after four unsuccessful previous attempts, against Ruto, making his first stab at the presidency. The third protagonist was outgoing President Uhuru Kenyatta, who, following a bitter falling-out with Ruto in 2018, had spurned his long-time ally to strongly support Odinga. That shuffling of political cards and the new alliances it brought meant that the outcome was especially unpredictable. Many were concerned that the electoral season could once again be turbulent, given the acrimony between the president and deputy president.

A second worry was that the Independent Electoral and Boundaries Commission (IEBC) would not be up to the tasks of running smooth polls and ensuring a credible vote count. The body’s weaknesses had been on display in past elections. After the last vote in 2017, the Supreme Court had annulled the presidential poll and ordered a fresh election, arguing that “irregularities and illegalities” had compromised the vote’s integrity. Independent audits pointed out other deficiencies and suggested remedies that the commission, parliament and state have yet to apply. On top of these issues, this time around, the IEBC’s budget allocations were delayed and the electoral laws it needs to do its job properly were passed only weeks before voting, all while state authorities subjected it to various untoward pressures.

Both of the main presidential candidates mounted issue-based campaigns rather than trying to marshal support primarily along ethnic lines.

As it happened, there was little to fear on either count. Both the electioneering and the vote went off peacefully, with a few disturbing exceptions, in a welcome break from the past. One reason for the relative calm was likely that both of the main presidential candidates mounted issue-based campaigns rather than trying to marshal support primarily along ethnic lines, as their predecessors have often done. Unemployment and the rising cost of living – and the candidates’ ideas about how to tackle those problems – took centre stage during this electoral cycle.

The elections were also much more transparent than previous ones. Final tallies showed a narrow victory for Ruto. He polled 50.49 per cent of the vote, while Odinga garnered 48.8 per cent. Observers from several outside institutions, including the African Union and the European Union, hailed the IEBC’s conduct in running the polls. In one measure that earned it plaudits – and boosted the count’s transparency – the IEBC uploaded the results forms from each of the 46,229 polling stations to an online portal for all to see.

The process was not perfect, however. Following a mix-up of ballot materials, the IEBC postponed some local elections, including gubernatorial contests in Kakamega and Mombasa, two of the subnational units known as counties. These polls eventually took place on 29 August. Police also recorded a dozen security incidents related to the elections: an electoral official was shot and injured during an attack on a tallying centre in Wajir county in northern Kenya, forcing the commission to halt the count. Another IEBC official, Daniel Musyoka, was found strangled after having disappeared in the Embakasi East district of Nairobi. His murder is a particular blot: it remains unexplained, with no suspect identified. At Musyoka’s burial on 26 August, electoral commission Chairman Wafula Chebukati condemned the persistent attacks on commission staff, citing also the brief detention by police of several senior officials in the course of counting votes.

Confusion marred the final presidential result declaration on 15 August, even though the IEBC had posted the results forms online and announced each constituency tally on television after verification by the rival presidential campaigns. As Chebukati was preparing to name Ruto the winner, Odinga allies at the national tallying centre tried to prevent him from doing so. A brawl erupted, though security forces swiftly restored order. At the same time, four of the seven IEBC commissioners – all recently appointed by Kenyatta – walked out of the tallying centre. They held a press conference questioning the results, notably accusing the IEBC chairman of sidelining them while the vote totals were compiled. The commissioners’ assertions were undermined by the fact that they had played a prominent role in relaying earlier provisional tallies on television, before staging their last-minute protest. Chebukati eventually announced the results, but the walkout cast a pall over the proceedings.

The next day, Odinga officially rejected the final tally, citing the divisions among the IEBC commissioners as proof of malfeasance. He and several other individuals and NGOs filed petitions on 22 August, laying out a raft of claims against the electoral commission. In particular, they questioned the integrity of the technology used to identify voters and transmit results, and the probity of the foreign firm that supplied it. They also alleged that hackers had penetrated the IEBC’s servers and tampered with the forms uploaded on its portal. A key contention by the petitioners was that Ruto may not have won enough votes to hit the 50 per cent mark. The Kenyan constitution mandates a run-off if no candidate gets half the votes in the first round.

Following days of televised proceedings that transfixed the country, the Supreme Court upheld the election. The seven judges led by Chief Justice Martha Koome dismissed all of Odinga’s complaints, arguing that his legal team had failed to provide sufficient evidence to call the election’s validity into question. Court-ordered scrutiny of the IEBC’s servers found no evidence of intrusion. A recount at 41 stations identified by the petitioners returned an exact match with official tallies, although it found minor errors, including missing signatures and misfiled forms. The court concluded that the IEBC had complied with laws demanding that elections be “simple, accurate, verifiable, secure, accountable and transparent”. The judges did, however, pinpoint areas where the IEBC could improve, highlighting the divisions and mistrust among commissioners, and urging the commission to follow through with the recommendations from past audits.

[Raila] Odinga and his running mate, Martha Karua, indicated that they would respect the [Supreme Court's] decision, though they disagreed with it.

All parties accepted the judgment. Odinga and his running mate, Martha Karua, indicated that they would respect the decision, though they disagreed with it, a stance echoed by the IEBC officials who had walked out of the tallying centre. President Kenyatta, whose stony silence since the results were announced had raised questions among the public about whether the presidential transition would be smooth, committed in a televised address on 5 September to “executing the orders” of the court. He did not mention Ruto, however, or acknowledge his victory. For his part, Ruto welcomed the judgment, appealing for peace and unity. He also pledged to accord Kenyatta a dignified retirement, following a precedent set by all of Kenya’s past presidents. On 7 September, Ruto said on Twitter he had spoken to Kenyatta by telephone to discuss the next steps in the transition. The president-elect will be sworn in on 13 September.

Kenya’s 2022 electoral exercise is an important achievement in many respects. It builds on the lofty aspirations of the 2010 constitution, one of the most progressive in Africa, which was adopted following the weeks of communal violence and police killings that marked the controversial 2007 presidential election. The walkout by four IEBC commissioners was lamentable, but overall, that body and other institutions, notably the security forces, performed their duties with a high degree of autonomy. In 2017, the Supreme Court, although featuring two different judges, had showcased this quality when it annulled Kenyatta’s win, ordering a rerun. This time around, its unanimous decision reinforced the Kenyan judiciary’s reputation as a ferociously independent institution that consistently resists political pressure. In issuing their televised decision, the judges indicated that unnamed individuals had attempted to influence them as they deliberated on Odinga’s petition.

The stars of the electoral cycle were the Kenyan public. Despite moments of high tension, notably on 15 August, when agents and politicians clashed at the tallying centre, there were no reported instances of communal violence.  Most people went about their ordinary business, ignoring the pitched elite quarrels in a departure from the past, when many viewed electoral contests in existential terms. On social media, many in the Horn of Africa reflected on the lesson for other countries in the troubled region – that free and fair elections, even when they are intensely competitive, can pass off peacefully and help anchor stability.

Still, as noted by the Supreme Court, Kenya’s electoral process has room for improvement. Authorities should in particular strive to carry out recommendations to complete electoral laws and put in place electoral officials well in advance of the vote. On this occasion, the IEBC secretariat’s top official was appointed just months before balloting and, as noted above, electoral laws were not final with weeks to go. The courts issued numerous judgments on voting procedures, even in the last days ahead of the election. Predictable budgeting for the IEBC could further strengthen the institution. Such changes would allow the electoral commission to continue building trust among the public.

With the election season coming to an end, the incoming Ruto administration must quickly turn to the many challenges it needs to address. These include dealing with an economic downturn that has fed social discontent. Importantly, the president-elect should stick to his promise to work with rivals across the political divide. The 2022 Kenyan elections have been a success and an example to the region. For Ruto, however, given sky-high popular expectations and an economy in dire straits, governing may well prove tougher than campaigning.