Jubaland in Jeopardy: The Uneasy Path to State-Building in Somalia

On 15 May 2013, Sheikh Ahmed Madobe, leader of the Ras Kamboni militia and a close ally of Kenya, was elected Jubaland president by regional clan representatives. Hours later, Barre Hirale, a warlord from a rival clan allied with the Somali Federal Government (SFG), declared himself president. The effort to create a Jubaland state within Somalia will test the limits of federalism in that country, and threatens to touch off clan warfare not only within Somalia but also in its neighbours.

We spoke to Zakaria Yusuf, Somalia Analyst, and Claire Elder, Horn of Africa Research Assistant, to learn more about Jubaland and find out if there is a risk of conflict.

Where and what is Jubaland?

Jubaland is shorthand for Somalia’s diverse, southern-most section, linked by the course of the Juba River. The original Juba provinces covered a much larger area, but in 1975 President Siad Barre carved the then Lower and Upper Juba into Middle and Lower Juba, Gedo, Bay and Bakool regions. Gedo was created as a predominately Marehan-clan area – a clan bailiwick for the president, who was a Marehan. The nascent Jubaland State consists of Gedo, Middle Juba and Lower Juba – all areas adjacent to the Kenya-Somalia border – and does not include Bay and Bakool regions.

Though Jubaland includes Gedo and Middle Juba, control of Lower Juba and Kismayo port is the biggest prize. Kismayo city is cosmopolitan, but the dominant clans are Darod/Harti (long-term “immigrants” from present-day Puntland and Somaliland), Darod/Marehan (more recent immigrants from central Somalia and Gedo) and miscellaneous Hawiye communities. Areas outside Kismayo are predominantly inhabited by Darod/Ogaden clans – also present in neighbouring northeast Kenya and southeast Ethiopia – as well as Jareer (also know as Bantu), some Mirifle (collectively known as Rahanweyn), Awramleh (a small Irir clan) and Galja’al and Sheekhal (often included as Hawiye). The Bajuni (a Swahili speaking group) inhabit the coastal districts near the Kenya border. The city of Jamame – still under the control of the jihadist Al-Shabaab group – is seen as the home of Bimal (Dir), Jareer and mixed Hawiye groups.

Who has ruled Jubaland?

In September 2012, an alliance of pro-SFG militias, Ras Kamboni militiamen and Kenyan Defense Forces (KDF), all under command of the African Union Mission in Somalia (AMISOM), ousted Al-Shabaab from Kismayo. Jamame district and most rural areas are still controlled by the radical group. The current militias are only the latest in a long line of would-be masters of Jubaland since the collapse of the central Somali state in 1991, as can be seen in the chart below: 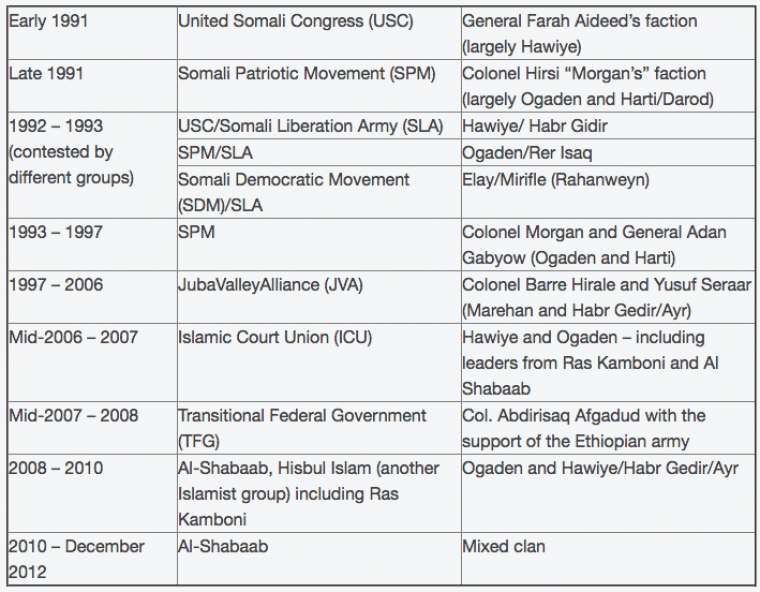 When did the Jubaland initiative start?

The idea started to gain currency in 2009 as part of a desire among local clan, business and political elites – with support from parts of the Kenyan state, including politicians of Somali descent – to oust Al-Shabaab. It was a good fit with the U.S. government’s “dual track” policy – conceived to support local security and stabilisation in the absence of a strong central state. However, the U.S. and other Western powers were cautious about this particular project. The Transitional Federal Government (replaced by the Somalia Federal Government in August 2012) was lukewarm at best, and Ethiopia was circumspect.

Nevertheless, clan elders from the region met in Kenya from March to April 2011 – the regions in question were still controlled by Al-Shabaab to create what was initially called Azania – swearing in ex-TFG minister Mohamed Abdi “Gandhi” as interim president. Ethiopia and Marehan politicians from Gedo opposed what they perceived as an Ogaden-clan-dominated, Kenya-initiated project.

Following the Kenyan military intervention in October 2011[fn]See our report The Kenyan Military Intervention in Somalia, Feb 2012.Hide Footnote , further Nairobi-based talks began in May 2012 to broker agreement between the Ogaden, Marehan and Harti as well as many smaller clans. A 32-member technical committee was charged with establishing a Jubaland administration. But the perception of clan dominance was hard to shift since the main signatories at the Jubaland conference – with the exception of one Galja’al – were all from Darod clans.

How does Jubaland fit with the current Somalia Federal Government?

After Kismayo’s September 2012 capture by Kenyan Defense Forces troops (by that time under AMISOM command) and allied Somali groups – especially Ahmed Madobe’s Ras Kamboni militia – the SFG and the local interim administration disagreed over who should lead the formation of a new regional federal state. Talks reconvened in Kismayo in late February 2013 paid for by Jubaland supporters.

The SFG opposed the talks and Prime Minister Abdi Farah Shirdon declared them unconstitutional. He said they should follow the precedent of SFG-appointed interim administrations elsewhere in the south. However, the local leadership – with support from disgruntled SFG parliamentarians, Puntland (the Harti-Darod homeland) and the regional body, IGAD (Inter-Governmental Authority on Development) – argued that they should establish a regional state as per the provisional federal constitution.  There is enough ambiguity within the federal constitution for both the SFG and Jubaland to have a case, but each accuses the other of inflexibility.

What are the local and regional interests at play?

Jubaland is a potentially rich region, with good seasonal rainfall, year-round rivers, forests, and lush farm- and range-lands, as well as potential off-shore oil and gas deposits.  The harvesting and export of charcoal has become a particularly lucrative industry, a trade currently banned by UNSC resolution 2036 (2012) which nonetheless is flourishing with the cooperation of AMISOM-allied militias. The domestic stakes of the Jubaland process are high, as clan factions fight over the division of resources.

Ethiopia and Kenya have used the regional organisation IGAD as a forum to support a Jubaland regional state through a “Grand Stabilisation Plan”.  An IGAD “confidence-building mission” is currently visiting Jubaland. Kenya’s interest is strategic and economic: a semi-autonomous Jubaland as a buffer-zone from Al-Shabaab attacks on both its tourism industry and a massive Lamu port development project; secure access to the Kismayo market; and influence over oil and gas deposits in a contested maritime zone. Stability could also facilitate plans to repatriate 500,000 Somali refugees now living in Kenya. Ethiopia’s interest is primarily that an Ogadeni-dominated Jubaland could complicate its struggle against the Ogaden National Liberation Front (ONLF) in Ethiopia’s Somali-inhabited south-east. But Ethiopia also has economic interests, including the possibility of alternative access to the sea.

Is there a risk of conflict?

Clan and inter-regional tensions between Darod clans (particularly Marehan and Ogaden) were already evident during the process of electing Ahmed Madobe (a former Islamist militant) as Jubaland’s president. To counter Ogaden-clan dominance, Marehan will back Barre Hirale’s rival presidency. Smaller clans have also staked their claims to a Jubaland presidency, including Omar Burale Ahmed (a Bimaal/Dir candidate) and Abdi Baaleey Huseen (a Galja’al). Nationally, Jubaland is perceived as a struggle between Hawiye (who influence the SFG) and Darod clan elites (who feel excluded). Al-Shabaab still maintains a significant presence in southern Somalia and is exploiting divisions; for example, tensions between rival militias allowed Al-Shabaab militants to attack a Ras Kamboni military base at Kismayo airport in late April.

Somalia has been fighting the Al-Shabaab jihadist insurgency for well over a decade. After reclaiming control of Mogadishu and other cities in the early 2010s, government forces – with the support of African Union troops – have made limited progress since. Instead, Al-Shabaab has adopted guerilla tactics and managed to consolidate control of rural areas, while regularly conducting deadly attacks on Somali cities. A recent Crisis Group report recommended that stakeholders should at least begin to explore the feasibility of eventual political talks with Al-Shabaab, alongside pursuing existing military operations, to add another tool in the struggle to bring the longstanding conflict to an end.

This week on The Horn, Alan talks to Omar Mahmood, Crisis Group’s Senior Analyst for East Africa, to discuss the risks and opportunities that this approach might incur. They assess the strengths and limitations of the military campaign against Al-Shabaab and its prospects for success, as African Union forces inch closer to the end of their mandate in the country. They discuss previous attempts to engage Al-Shabaab and the group’s willingness for dialogue. They talk about the impact of multiple failed rainy seasons in Somalia and the need for humanitarian assistance that reaches populations in both government and insurgent-controlled areas. They also discuss the wider implications of Somalia’s Al-Shabaab outlook in the region, including how the country’s neighbours and international partners might respond to the prospect of engagement with a self-professed al-Qaeda affiliate.

Check out Crisis Group’s report, “Considering Political Engagement with Al-Shabaab in Somalia”, in full to learn more about the situation in Somalia and efforts to bring the conflict to an end.