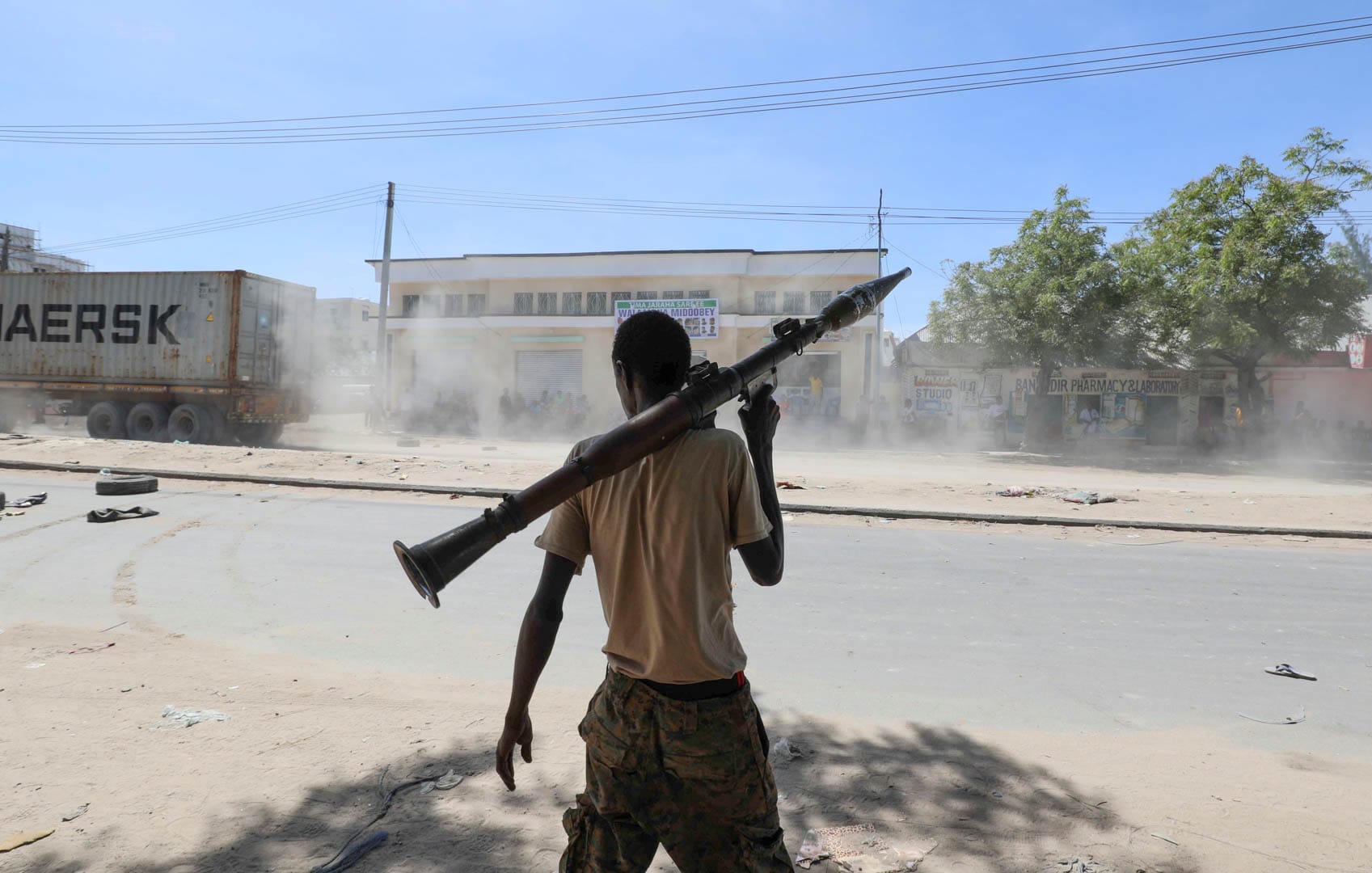 Why Somalia’s Electoral Crisis Has Tipped into Violence

After months of deadlocked talks over elections, the streets of Mogadishu on 25 April witnessed heavy fighting between rival army units. In this Q&A, Crisis Group expert Omar Mahmood examines the factors that triggered the latest violence – and explores ways to calm the waters.

Clashes broke out on 25 April between forces loyal to Somalia President Mohamed Abdullahi Mohamed “Farmajo” and those aligned with the political opposition as Somalia’s deepening electoral crisis descended even further into violence. Rival forces exchanged gunfire in neighbourhoods of Mogadishu, including those in which opposition political leaders reside. Local sources indicate that the clashes resulted in approximately two dozen casualties and displaced hundreds of civilians. The fighting subsided by Sunday evening and Mogadishu was quiet the next morning, with most residents staying at home. The situation remains tense, however, as heavily armed rival security units are still deployed in parts of the city, an ominous reminder to all who come across them that fighting could resume at any moment.

The violence comes on the back of the Somali elite’s repeated failure to agree on how to hold an election, with the temperature continuing to rise after President Farmajo ran over his term limit and stayed in office after 8 February. Tensions escalated further this month when parliament on 12 April extended the current government’s term by two years, infuriating the opposition who say that Farmajo’s continued occupation of the presidential palace is unconstitutional.

The immediate trigger for this week’s fighting was the influx into Mogadishu of Somali National Army (SNA) units loyal to opposition politicians. The troops, originally based in Hirshabelle in south-central Somalia, were led in by a commander who shared a clan constituency with former presidents and current opposition leaders Hassan Sheikh Mohamud and Sheikh Sharif Ahmed. On arrival, those forces took up positions in areas of north east Mogadishu. Federal government troops tried to retake these positions, resulting in heavy exchanges of gunfire. Amid the chaos, Hassan Sheikh Mohamud said federal forces attacked his residence.

Elsewhere in Mogadishu, government-aligned forces advanced into a neighbourhood dominated by the Haber Gedir sub-clan of the Hawiye, resulting in additional clashes with opposition forces, including those loyal to the dismissed chief of Banadir’s police, Sadiq “John” Omar, who has emerged as a vocal opponent of Farmajo’s attempts to stay in power. Government forces retreated by the end of Sunday to positions closer to the government complex, known as Villa Somalia, leaving the opposition units in control of sections of the capital.

What has the reaction been?

The mood is still very tense. While the federal government initially stated on Sunday that it had successfully repelled “militia attacks”, Prime Minister Mohamed Hussein Roble followed this with a short statement, noting that the government is open to dialogue. But he also encouraged the army to maintain public order, seemingly signalling support for the government incursions into opposition areas of the capital. Somalia’s international partners, such as the UK, U.S., European Union (EU), Intergovernmental Authority on Development and UN, condemned the fighting and called for a return to dialogue. The Council of Presidential Candidates (CPC), an alliance of opposition figures, also condemned the violence, saying forces loyal to the incumbent were intent on resolving the crisis through violence. CPC member Hassan Sheikh Mohamud went further, characterising the events as an assassination attempt against him and opposition figure Abdirahman Abdishakur Warsame.

Any further offensive from the government is likely to spark another round of heavy fighting.

Roble then met with civil society groups on Monday and called for an immediate ceasefire, but thus far the parties have not agreed on a concrete cessation of hostilities and both sides are weighing their next move. Any further offensive from the government is likely to spark another round of heavy fighting. Opposition forces may also look to take control of key economic sectors like the airport or Mogadishu port in any resumed fighting, so as to gain an upper hand. Rival forces might also decide they need to battle for control of major thoroughfares including the Maka al-Mukarama road that leads to Villa Somalia.

Why has this occurred now?

This is the second major outbreak of violence in Somalia’s capital since the onset of a political crisis over its stalled elections and the constitutional expiration of President Farmajo’s mandate. The first incident on 19 February involved government forces firing on opposition demonstrators demanding a swift election. The violence ratcheted up tensions and put the country on edge. Then, after further discussions around the elections broke down, came the 12 April decision by the lower house of parliament extending the current government’s tenure by two years. That deepened distrust between the opposing sides and raised the political temperature to boiling point. While the opposition called for more talks, the lack of progress and diminishing prospects for a resolution of the crisis have since prompted political and security actors to gear up for armed confrontation.

The biggest risk is that continued clashes further fracture the Somali security sector along clan lines.

The biggest risk is that continued clashes further fracture the Somali security sector along clan lines. The 25 April fighting demonstrated how that sector’s cohesion has mostly broken down in the heated political environment. The areas where the latest fighting took place are neighbourhoods where pro-opposition Abgaal, Haber Gedir and Murosade sub-clans of the Hawiye are dominant. A major meeting of Hawiye representatives last week also formally rejected the parliament extension, signalling a degree of unity within the clan that dominates the capital.

At the same time, the Farmajo administration is facing difficulties paying Somali security forces. Finance Minister Abdirahman Duale Beileh revealed on 25 April that international assistance to the government has dried up, meaning it will struggle to continue funding security personnel. One Somali military officer complained to Crisis Group that presidential guard units were paid last week, but soldiers on the front lines in the battle against Al-Shabaab were not, creating further disarray in the ranks of the security services.

How can a spiralling crisis be averted?

The clashes have narrowed the window to get Somalia’s electoral cycle back on track. They also widen the gaping trust deficit between the opposition and government, if not shattering it completely, further reinforcing the need for external intervention to calm the waters as Crisis Group has advocated over the last few months.

Any mediation effort should first focus on getting the rival actors to agree to avoid further fighting. Persuading the opposition to agree to talks in the first place will be tough. The lack of trust between the parties means that neither will readily disarm or remove their forces from Mogadishu in the immediate term. The opposition will also not accept the idea that Farmajo should be treated as a legitimate incumbent, and will argue that he should be considered as just another party to the conflict. The African Union (AU), which has signalled that it will name a Somalia envoy to mediate efforts over the stalled election cycle, should move forward on this with speed, and get efforts to bridge the chasm between Farmajo and the opposition started as quickly as possible.

The AU mediator, strongly supported by the UN, U.S., EU, UK and other partners, should focus on initiating a ceasefire. Under such an arrangement, duelling forces would agree to avoid further offensives while pulling back from contested areas in which they are in close proximity, to reduce the potential for accidental confrontations sparking a wider conflagration. The African Union Mission in Somalia (AMISOM) could help fill any security gaps and provide a buffer between the various factions, though the opposition has already questioned its neutrality, claiming it has lent support to Farmajo. AMISOM, through the AU special representative to Somalia, should make clear that it will play a supporting role to any AU-led mediation effort and will not take sides, to help assuage the opposition’s concerns.

Only when the waters are calmed can any concrete discussions about the electoral standoff proceed. However, resolving the electoral crisis and implementing the 17 September electoral framework agreement, which prescribed the terms of an indirect vote, will require healing and political reconciliation among Somali elites. Ideally, the process of organising the election would also now be opened beyond the original signatories of the electoral agreement, to include the wider political opposition and civil society groups. Allowing representatives from these groups to participate in future discussions on elections could assist in creating a more inclusive environment, and move the process beyond the views of just a narrow section of the Somali political elite.

International actors must signal a willingness to punish spoilers, including through targeted sanctions.

In the meantime, international actors must signal a willingness to punish spoilers, including through targeted sanctions. This might break a cycle where some of the political actors have calculated that outside powers will not go beyond public statements calling for an end to the crisis. Unity amongst Somalia’s external partners is paramount at this critical juncture, and external actors who pursue narrow bilateral interests by backing certain factions within Somalia further risk tipping the balance toward implosion. The U.S., possibly through its newly appointed special envoy to the Horn, should lean on all outside powers to press for de-escalation.

Somalia is teetering on the brink of a major breakdown once again. The latest fighting highlighted how the worst political crisis in years could easily spiral further downward. If left unresolved, it has the potential to return the country to civil conflict, undoing fragile gains made over the past decade and a half.