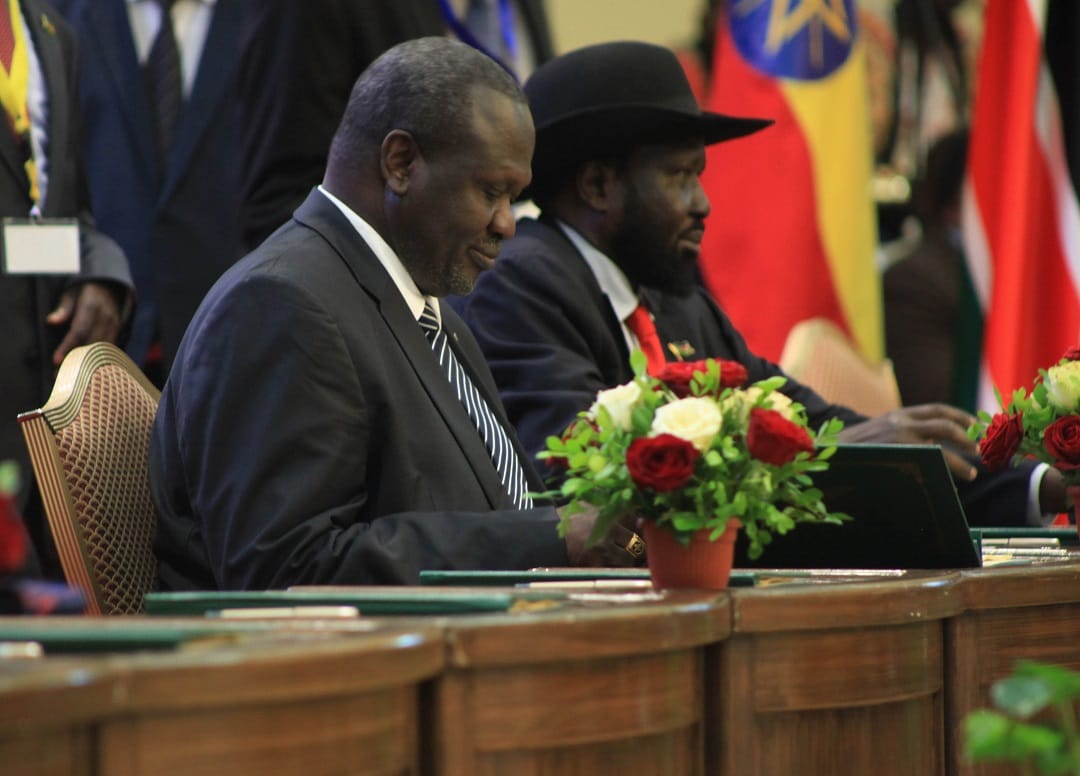 South Sudan’s rival parties have temporarily salvaged prospects for peace, agreeing a six-month deadline extension to allow for the formation of a unity government. But the country’s external partners must sustain pressure on both sides to preserve a ceasefire and maintain consensus on a path forward.

On 3 May at a summit in Addis Ababa, South Sudan’s rival parties agreed to a six-month extension of the deadline to form a unity government. A consensual delay had become the best available option to salvage South Sudan’s peace deal, which has produced the first sustained ceasefire in the five-year conflict pitting forces loyal to President Salva Kiir against an alliance led by former Vice President Riek Machar. But the next six months should not be wasted as the last eight were. The two sides need to make difficult decisions and South Sudan’s foreign partners should both encourage and pressure them to do so in order to prevent a return to war.

For the first extended period since the civil war broke out in December 2013, the news out of South Sudan is not uniformly bleak: after the parties reached a peace deal in September 2018, a nationwide ceasefire between the signatories has been holding, even though fighting continues between the government and smaller groups clustered in South Sudan’s Equatoria region who remain outside the peace deal. This is a noteworthy achievement after years of empty commitments by the parties to silence their guns. Thousands of lives have been saved. But the gain is tenuous. The agreement, brokered by the regional body IGAD (the Intergovernmental Authority on Development, long chaired by Ethiopia), gave the parties eight months to complete two main tasks: unifying a national army and resolving internal boundaries. Little, if any, progress has been made on either.

By extending the deadline it avoided a riskier alternative: unilateral formation of a new government by Kiir without the main opposition party’s participation.

This lack of movement is hardly surprising, as the status quo is convenient for both sides. The government has little incentive to execute a power-sharing arrangement that, by definition, will dilute its authority. Benefitting from its military strength, it has invested few resources to help finance implementation of the accord; this extension, or even one after that, is no hardship. Riek Machar, who in theory would have every reason to return to Juba to take up the post of vice president as provided by the accord, has also been content to procrastinate; he was the one insisting on a six-month delay. He appears to view the period prior to implementation – and notably the so-called cantonment process, under which both sides’ armed groups are to be assembled as a prelude to forming a new, unified army – as an opportunity to regroup and bankroll his fighting force, which has largely demobilised after years of attrition and a lack of external support. He will also want to wait for developments in neighbouring Sudan to settle down, given the role Khartoum has played as his historic patron. Meanwhile, regional and international interest in South Sudan has drifted and waned. With neither internal momentum nor external pressure, paralysis was virtually preordained.

The peace deal’s security provisions in particular have remained a dead letter. Kiir’s army ignored provisions to demilitarise cities. There was no advance toward cantonment: Machar did not send his soldiers to camps, claiming a lack of funds, which only confirmed to wary donors that this exercise is about subsidising armed forces that someday could revert to war.

Under the circumstances, the 3 May agreement is welcome news. By extending the deadline it avoided a riskier alternative: unilateral formation of a new government by Kiir without the main opposition party’s participation. When the government opted for that approach in 2016 and replaced Machar with a senior defector from his own party, two years of widening conflict ensued. There was another positive outcome: government representatives pledged $100 million to the implementation process, which – should Kiir carry out this commitment – will help assuage external donors increasingly impatient with Juba’s unwillingness to spend any of its own money.

But for the next six months not to mimic the inaction of the past eight, several steps will be crucial:

For now, the focus should be on using this reprieve wisely in order to preserve the ceasefire and help South Sudan move toward a more comprehensive and longer-lasting peace.

The Horn of Africa is undergoing seismic shifts, with a historic albeit risky transition in Ethiopia, a long-sought agreement between Addis Ababa and Asmara, the fall of Bashir, and South Sudan’s peace deal. Instability in any of these areas affects them all. The decision to extend the deadline for government formation in Juba is hardly a breakthrough. It represents a palliative at best, and a temporary one at that. It addresses neither the problem of the many localised rebel groups that Machar will struggle to accommodate, nor the ongoing power struggle between him and Kiir. But it is an achievement nonetheless. For now, the focus should be on using this reprieve wisely in order to preserve the ceasefire and, step by step, help South Sudan move toward a more comprehensive and longer-lasting peace.

The peace deal in South Sudan was signed in September 2018, not December 2018, as originally said in this statement. Correction made on 8 May 2019.