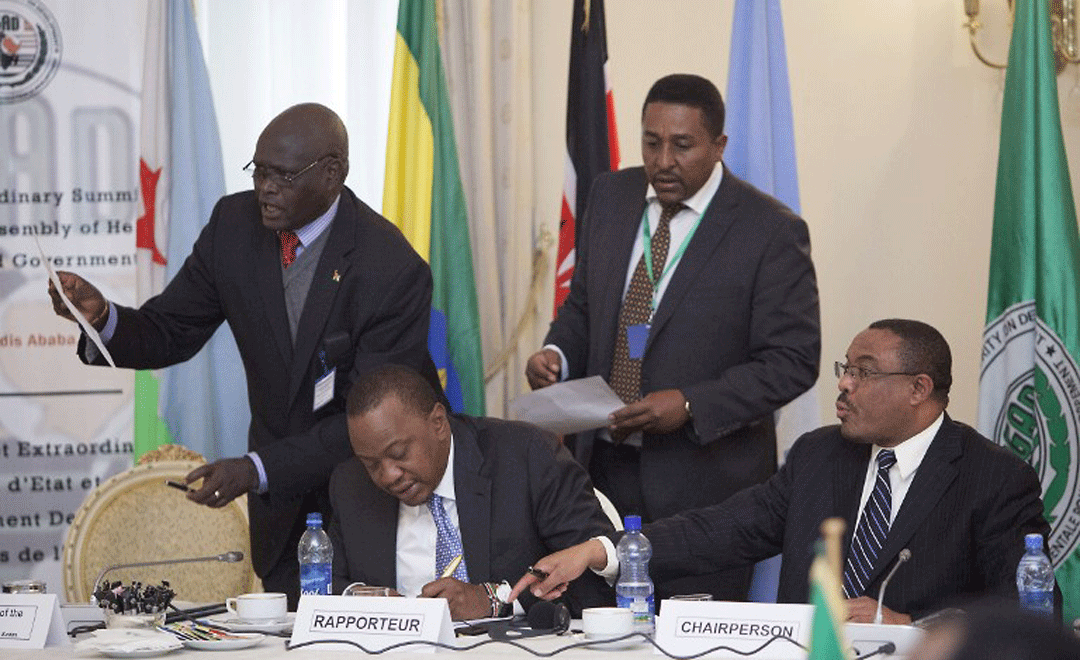 The upcoming Intergovernmental Authority for Development (IGAD) summit in Addis Ababa, Ethiopia, to be held on 30 January, is a rare window of opportunity for the regional body, and its partners, to compel South Sudan’s warring parties to make the compromises necessary for peace.

Pressure is increasing on the parties to sign onto a power-sharing deal amidst an uptick in troop movements, military skirmishes and hostile rhetoric about impending offensives. But this pressure is not yet enough. Without a sufficiently detailed agreement on power-sharing and security arrangements by the end of the IGAD summit (which will be held on the sidelines of the African Union (AU) summit), the entire IGAD peace process will be in jeopardy, with a likely return to intense conflict and deepening regionalisation of South Sudan’s war.

Following the inconclusive round of talks in late December, IGAD and its partners, particularly the U.S., have increased pressure on President Salva Kiir and opposition leader Riek Machar (the former vice president) to accept a power-sharing deal, but done relatively little to alter the calculus for war decisively. Despite its weaker military position, Machar’s Sudan Peoples’ Liberation Movement/Army-In Opposition (SPLM/A-IO) is unwilling to compromise on key aspects of a power-sharing deal and hoping the government (suffering huge revenue shortfalls with the drop in oil prices) will weaken over time, while many in the government hope that battlefield success will minimise the needed concessions to conclude the peace negotiations in Addis Ababa. This brinkmanship, based on the belief there is more to be gained by war than peace, is possible due to the competing interests of South Sudan’s neighbours, international allies and other private actors.

Even as the summit approaches, there are multiple, overlapping and, at times, contradictory processes, including: the IGAD mediation – led by mediators from Ethiopia, Kenya and Sudan – the AU Heads of State committee, the Tanzanian-led process to re-unite the competing factions of the Sudan Peoples’ Liberation Movement (SPLM), Chinese hosted meetings with the SPLM/A-IO in Sudan, a sidebar Kenyan effort, and dialogue between the Ugandans and the parties in Kampala, among other ad hoc initiatives. Meanwhile, the report of the African Union Commission of Inquiry, investigating atrocities committed by both sides, is expected to be acted upon at the AU Heads of State summit in late January.

Unfortunately, while international pressure is the strongest it has been in months, these processes are not operating under a united strategy. IGAD has not taken a visible lead in marshalling disparate actors behind a defined strategy, creating the space for the proliferation of processes. This is undermining the pressure that is being applied and allows for forum shopping.

New initiatives are going over ground already covered in the IGAD process, giving the parties opportunities to backtrack or stall on commitments made in Addis Ababa rather than move forward with difficult compromises. The sophistication of the parties’ tactics is often underestimated by the new initiatives and their backers, who have not adequately familiarised themselves with the IGAD process, struggle with the nuances of the South Sudanese context, and forget that the South Sudanese have been negotiating peace deals for decades. These initiatives are quickly becoming an obstacle to a genuine process. Parallel processes should be put on hold and there should be better clarity with respect to the relationship between the IGAD mediation and complementary processes. An international contact group (or similar structure) including IGAD, the AU, the UN, the Troika (the U.S., UK and Norway), the European Union, China, Tanzania, South Africa and Egypt should be established to reinforce and support the IGAD lead of the mediation.

Most critically, the U.S. and China – South Sudan’s biggest international patrons – need to work together in building consensus between divided regional states, with whom they have influence, to ensure that the mounting pressure finds traction at the summit. China’s efforts with Sudan and the SPLM/A-IO should be matched by the U.S. with Uganda. Sustaining this unity of purpose is also fundamental to the equally hard work of turning an agreement between elites into peace on the ground.

To take advantage of the IGAD summit’s window of opportunity, the following should happen:

The coming weeks will be decisive for the trajectory of South Sudan’s war and the international community must not allow yet another opportunity for peace to pass.

Up Next
Op-Ed / Africa

South Sudan’s fortunes have always been tied to its oil. The discovery of oil in the late 1970s deepened tensions between the South Sudanese and the regime in Khartoum and fueled violence after the outbreak of Africa’s longest-running civil war as both sides vied to control the region’s oil fields.

Oil then laid the groundwork for South Sudan’s secession. A landmark 2005 peace deal granted Juba half of the South’s oil revenues, pumping billions into the new semi-autonomous government.

But the sudden wealth gravely compromised the country’s stability. By 2013, only two years after independence, the elite scramble for South Sudan’s oil riches helped trigger a fresh war that may have killed 400,000 people while displacing millions.

Nowadays, despite a 2018 peace agreement and a government of national unity, Juba’s monopoly on oil revenue obstructs a broader political settlement the country desperately needs.

South Sudan’s leaders siphon off the bulk of the petrodollars, leaving much of the population starved of basic services and, in some parts of the country, on the brink of famine.

Pervasive corruption has become a huge source of frustration for donors, including the US, which allocates a billion dollars a year primarily to sustain humanitarian relief. South Sudan produces roughly 150,000 to 170,000 barrels a day. But because of the share owed to oil companies and fees paid to Sudan, it earns income from 45,000 barrels at most, according to the best estimates available. Little of that income reaches the national budget due to off-budget expenditures, undisclosed debt payments, and allocations to its opaque state oil company Nile Petroleum.

Those who still support South Sudan cannot ignore its rotten finances. Since oil underwrites the entire South Sudanese state, addressing the country’s deep troubles is impossible without a focus on its vanishing petrodollars. A first step in this direction is making the oil economy more transparent, not only in South Sudan, but also in Europe, host to many of the country’s commercial financiers.

Despite staggering poverty and underdevelopment, South Sudan qualified as a middle-income country at its birth thanks to its oil wealth. But instead of serving as a foundation for state-building, oil poisoned South Sudan’s politics. Before independence, rebel commanders enriched themselves through a mix of taxation, aid diversion, artisanal gold mining, deforestation, and outright looting. This culture of illicit self-dealing quickly came to resemble a free-for-all when the 2005 peace agreement unlocked billions of petrodollars.

After independence, oil money papered over the South’s ethno-political divisions until President Salva Kiir moved to consolidate power, tightening his grip on oil funds in the process. Only two years after secession, a leadership struggle between Kiir and internal challengers, led by his main opponent Riek Machar, burst into a civil war that drained state coffers, with oil production decreasing because of the conflict.

To stay afloat, South Sudan turned to a handful of commodity traders to purchase future deliveries of oil, including Swiss-Singaporean Trafigura, which bought South Sudan’s oil through secretive pre-payment arrangements. These high-interest cash advances worked like the petrostate equivalent of a payday loan scheme, piling up debt while hiding South Sudan’s finances ever further from sight.

Back to the books

South Sudan’s future would appear less bleak if the countries that foot the bill to alleviate the country’s humanitarian disaster focused on making sure Juba accounts for its oil revenue.

Donors should make a concerted effort to push Juba to comply with existing laws and provisions in the 2018 peace agreement to ensure that oil proceeds are paid into a single public oil revenue account. One source of leverage is through the IMF, which has given South Sudan $550m in the past year but with few strings attached. The IMF should condition future disbursements on the exclusive use of the public oil account.

Outside pressure on Juba should be supplemented with pressure on South Sudan’s financiers. European governments should urge trading companies with a strong corporate presence in Europe to disclose their payments to South Sudan and demand the funds be deposited into the official oil account.

They should also consider drafting regulations requiring commodity firms under their jurisdiction to certify compliance with South Sudan’s law. This could work. Following engagement by the UN Panel of Experts on South Sudan, Glencore has disclosed purchasing $950m of South Sudanese oil since 2018. Additional leverage could come from widening the regulatory net to the commodity firms’ insurers and bankers, many of which are also in Europe.

Declining output and global decarbonisation mean that South Sudan will not be in the oil business forever, and given the trouble it has caused there, the transition may provide as much opportunity as risk. Still, bringing the oil money back onto the books of the national budget could at least give the South Sudanese a chance to reset their bloody politics now, not when the oil pumps stop.