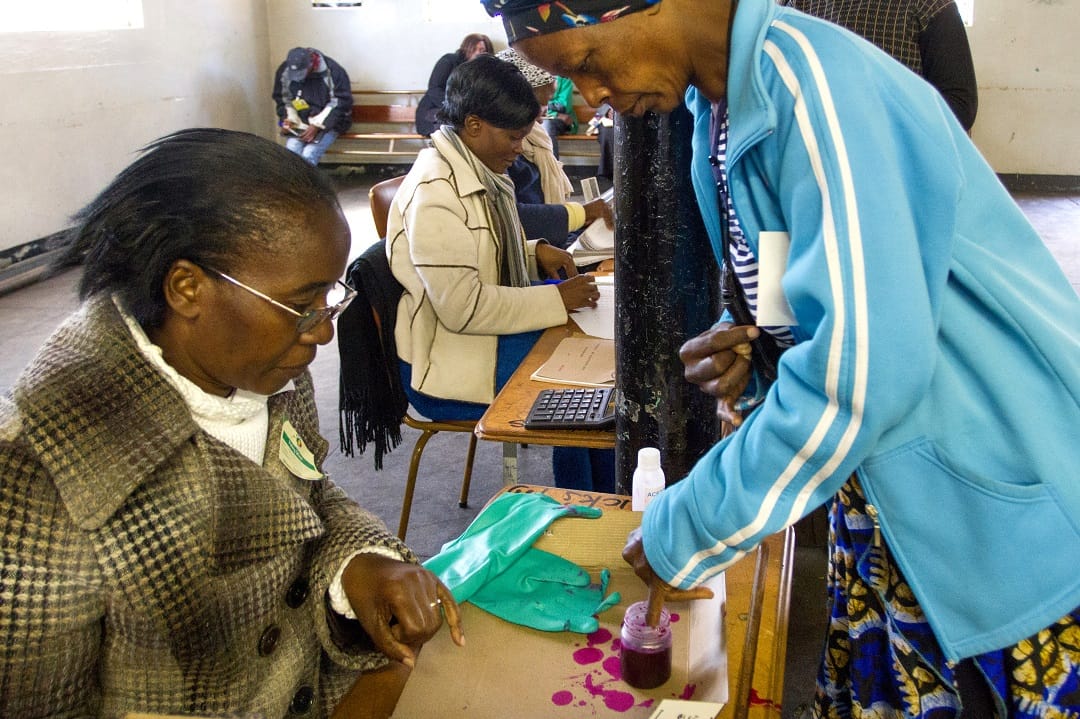 A polling agent looks on while a voter dips her finger in the inedible ink during parliamentary by-elections at a polling station in Bulawayo on 10 June 2015. AFP/Zinyange Auntony
Commentary / Africa 07 February 2017

The ruling ZANU-PF is exploiting the many weaknesses of Zimbabwe’s electoral system to outpace the country’s divided opposition. Yet without a real change of policy, the country seems doomed to steeper decline.

The landslide victory of President Robert Mugabe’s ruling party in a 21 January by-election in Zimbabwe’s Bikita West constituency is a troubling bellwether for the future of the country. It signals that presidential and parliamentary elections in mid-2018 are unlikely to be credible, free or fair, and also that without fundamental change through a legitimate election, Harare will maintain the self-destructive policies that have done so much damage.

In Bikita West, the Zimbabwe African National Union-Patriotic Front (ZANU-PF) candidate, Beauty Chabaya, promoted from its provincial women’s league, won with 77.9 per cent of the vote. The opposition complained of assaults, intimidation and threats of retribution by senior ZANU-PF figures against disloyal voters – the identification of whom was easier as voting results are broken down by polling station. Local party structures and traditional authorities also helped to monitor voters and in the run-up to the poll reportedly manipulated the distribution of food aid and farming inputs.

The Bikita West vote was the latest in a series of by-elections being watched for how Zimbabwe and the ZANU-PF will fare, not just in next year’s elections, but also during the transition from more than three decades of rule by the ailing President Robert Mugabe, 92.

Credible elections in 2018 will be crucial for arresting Zimbabwe’s precipitous decline. Considered a middle-income country in the 1990’s, the economy nearly halved in the 2000s and has not recovered since. A large number of skilled workers in the government and private sector have left the country. According to the World Bank, 72 per cent of the population is poor and 20 per cent live in extreme poverty.

Zimbabweans, despite exposure to much poor governance, put great store in a legitimate electoral process leading to reform. But this will require more than simply depoliticising the institutional machinery responsible for elections. More years of unchanged policies would further entrench a corrupt government and predatory state incapable of decisive change, leading to further social stagnation, economic slowdown and risks for the future stability and development of the region.

The opposition has struggled to make an impact following the 2013 elections defeat of the opposition Movement for Democratic Change-Tsvangirai (MDC-T) and subsequent turmoil within that party that resulted in the vacation of many parliamentary seats. The main opposition’s subsequent boycott has allowed ZANU-PF to win all but one of more than 20 post-2013 by-election contests and grow its two-thirds majority in parliament.

The ruling party’s shock loss in the Norton constituency in the October 2016 by-election was seen by some as a sign of its vulnerability. The MDC-T and Joice Mujuru’s Zimbabwe People’s First (ZimPF) coordinated with disaffected war veterans to elect the independent candidate, Themba Mliswa (a former ZANU-PF parliamentarian and Vice President Emmerson Mnangagwa’s cousin). Some argue Mliswa’s victory demonstrated that a unified opposition could win, even without meaningful electoral reforms.

But others contend that the loss was a result of a contest between ZANU-PF factions, and that the nominally independent Mliswa was a stalking horse for Vice President Mnangagwa against the official ZANU-PF candidate, Ronald Chindedza, who was loyal to a rival faction of the party.

There were no signs of ruling party vulnerability in Bikita West: President Mugabe sent a clear directive that the constituency be won at all costs; ZANU-PF presented a united front; and MDC-T and war veterans did not close ranks behind the main opposition candidate, ZimPF’s Kudakwashe Gopo.

Opposition parties continue to talk, but, riven by infighting, have neither fully joined forces, nor been able to take advantage of ZANU-PF’s internal discord either. ZANU-PF’s most significant challenge remains the choice of Mugabe’s successor. Mugabe was re-endorsed at the party’s National Conference in December as its presidential candidate for the 2018 elections, when he will be 94. With his physical capacities visibly waning, his failure to put in place a clear succession plan appears to be designed both to temper the ambitions of Mnangagwa, who is regarded by many as an obvious heir, and also to soothe the frustrations of those opposed to the vice president. The intra-party discord and jockeying is likely to frustrate political and economic reform and thus Western re-engagement.

But that is not enough to make the opposition trust institutions like the Zimbabwe Electoral Commission (ZEC), the police and the courts

The sweeping victory for the ruling party in Bikita West raises deeper questions about the scale of popular support for the opposition. The National Electoral Reform Agenda (NERA), an umbrella opposition campaigning platform, retains an official position of boycotting elections until the process is reformed, but has failed to present a united political front. The MDC-T has boycotted all by-elections because promised reforms remain largely unaddressed, but others have joined in to varying extents.

It is unclear why ZimPF, a member of NERA, put up a candidate in the Bikita West election at all. There were internal ZimPF tensions over whether or not to participate, and the provincial party leaders who pushed against it have now resigned. In the end, the failure of ZimPF’s candidate in Bikita West has now damaged ZimPF leader Mujuru’s prospects of leading an opposition coalition in the 2018 elections.

ZANU-PF vehemently denies allegations by the opposition and civil society of wrongdoing in Bikita West. But that is not enough to make the opposition trust institutions like the Zimbabwe Electoral Commission (ZEC), the police and the courts, which should be able to combat these violations. Severely underfunded after producing reports critical of the government, the Zimbabwe Human Rights Commission (ZHRC) cannot launch a serious inquiry into the elections.

The region could help. The Southern Africa Development Community and African Union have developed a framework for electoral conditions, and should launch an assessment of Zimbabwe’s democratic progress and shortfalls. They should carefully consider the concerns raised by NERA and others, and propose realistic reform implementation timelines ahead of the polls.

Powers from further afield will be less willing to engage the more compromised the legitimacy of the regime becomes. Even then they will have to tread carefully, balancing support for improving institutional capacities and addressing problems, without inadvertently adding to distortions of what is already a skewed electoral environment.

The March by-election in Mwenezi East promises to test conditions once again, as a senior ZimPF leader and former ZANU-PF firebrand, Kudakwashe Bhasikiti, runs in his former constituency. The Bikita West by-election highlights how much still needs to be done – both by the ruling ZANU-PF and the opposition.

How South Africa Can Nudge Zimbabwe toward Stability

All That Glitters is Not Gold: Turmoil in Zimbabwe’s Mining Sector