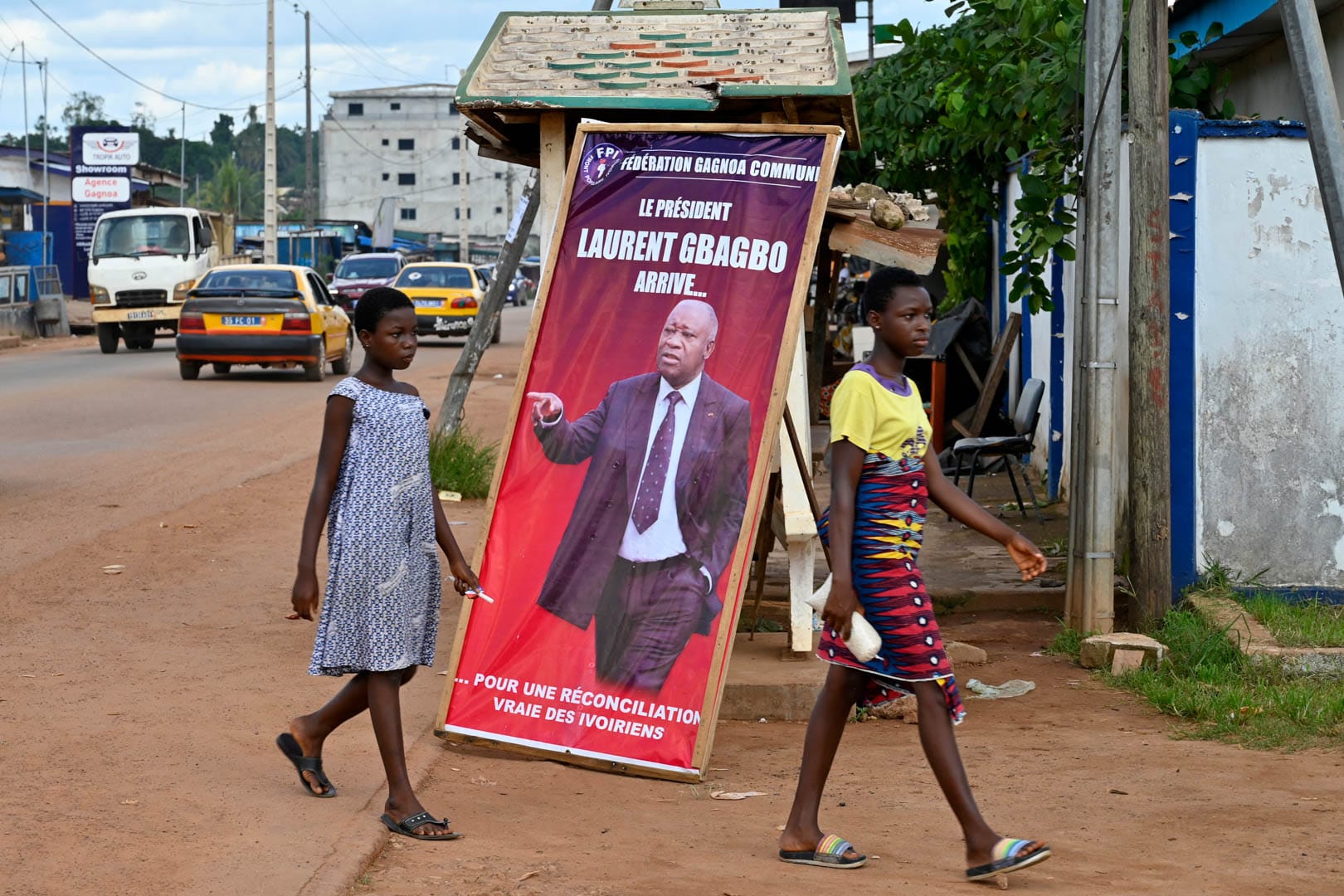 Gbagbo’s Return to Côte d’Ivoire: A New Opportunity for Reconciliation

Why is Laurent Gbagbo returning to Côte d’Ivoire?

On 31 March, the International Criminal Court (ICC) confirmed the acquittal of the former Ivorian president, who was accused of crimes against humanity. He is now free to return to his country. He was arrested in April 2011 and transferred to The Hague in November that year after the deadly violence caused by his refusal to accept defeat by Alassane Ouattara, Côte d’Ivoire’s current president. According to the UN, the confrontations – essentially between Ouattara’s supporters and pro-Gbagbo militants – led to more than 3,000 deaths between December 2010 and April 2011.

Dubbed the “post-election crisis”, the clashes were the most lethal since the country entered a prolonged political impasse shortly after the death in late 1993 of Félix Houphouët-Boigny, the founding father of the Ivorian nation. This violence deepened Côte d’Ivoire’s political and regional divides, particularly between the north and south. Neither side showed a genuine desire to resolve the conflict, preventing reconciliation during the following decade. The most recent presidential election, on 31 October 2020, was marred by tensions and violence. Political antagonisms led to 87 deaths and the detention or house arrest of opposition leaders until December 2020.

Ouattara’s landslide victory in the 2020 presidential election, combined with his pledge to allow Gbagbo to return, finally calmed the political waters. He defeated a divided opposition that lacked a clear vision for the country. Legislative polls in March 2021, the first time that all the country’s main political forces took part in elections, took place without incident. Between December 2020 and April 2021, the Ivorian courts ordered the release of more than 100 prisoners, including political opponents and civil society activists jailed after 2020.

Many of the harder-line members of Gbagbo’s party, forced into exile after the end of the post-election crisis, have recently returned to Côte d’Ivoire but have now adopted a more conciliatory stance. The government and Gbagbo’s supporters seem to have normalised their relationship, even though some of his staunchest backers – an activist group known as “Gbagbo or no one” – remain opposed to dialogue with Ouattara. After several months of talks between the Ivorian authorities and Gbagbo’s envoys, the former president’s return was announced for 17 June by the general secretary of his party, the Ivorian Popular Front (FPI).

What conditions did the government place on this return?

President Ouattara has given his assurance that his predecessor will be treated as a former head of state and receive the benefits associated with that status (accommodation, security detail, pension, staff), including salary payments due to him since 2011. The state will also cover the cost of his return journey on a commercial flight. These gestures appear designed to show that the state is intent on rehabilitating the former president. Crisis Group interviews with members of the government and the president’s party reveal that, in return, officials expect Gbagbo – who held power from 2000 to 2010 – to retire from politics.

In their dealings with Gbagbo, the authorities hold a powerful card. The former president has been convicted in absentia and sentenced to twenty years in prison in Côte d’Ivoire for the “BCEAO heist”: an Ivorian court found Gbagbo and three of his former ministers guilty of ordering security forces to break into and loot the Abidjan branch of the Central Bank of West African States. Since Ouattara has not yet granted a presidential pardon or an amnesty, Gbagbo could face imprisonment. He is unlikely to go to jail, however. Arresting Gbagbo, who remains popular in the country, would anger his supporters and could trigger a new round of political violence.

The government fears that Gbagbo will stage a triumphal return and wants to avoid thousands of supporters descending on the airport when he arrives back in the country.

The government fears that Gbagbo will stage a triumphal return and wants to avoid thousands of supporters descending on the airport when he arrives back in the country. Such a crowd of supporters would pose a security threat: associations of victims of the 2010-2011 post-election crisis, which are calling for the former president’s arrest, could be tempted to organise protests. Symbolically, the mobilisation of a large crowd of supporters to welcome Gbagbo upon arrival would also allow him to prove how popular he remains. Hence the authorities prefer a discreet arrival, with the former president’s close associates meeting him in an area of Abidjan’s airport that is reserved for high-profile figures.

Why is Laurent Gbagbo still such a popular figure?

There are three main reasons for Gbagbo’s popularity. First, he was a prominent opponent of the one-party rule established by Félix Houphouët-Boigny following independence. His name is still linked to the creation of a democratic, multiparty state for which he advocated. Secondly, in a highly unequal society, he articulated the concerns of the lower classes and areas that did not benefit from post-independence development – including his own region, the centre west, and parts of the border region with Liberia. A particularly skilful orator, Gbagbo captured and then whipped up nationalist sentiments in a country that hosts a large community of West African immigrants. As the country’s economy stagnated, many Ivorians blamed immigrants for all their troubles, and political leaders played on this xenophobia for electoral gain.

Gbagbo’s popularity received a further boost from the 2010 elections, as well as his acquittal by the ICC and the profile of his constituency. In the presidential election’s second round in November 2010, he performed strongly with 46 per cent of the vote, compared to 54 per cent for his rival Ouattara, who was backed by the Democratic Party of Côte d’Ivoire (PDCI, the country’s former ruling party). Although his party’s ten-year boycott of elections makes it difficult to gauge the extent of Gbagbo’s popularity, it seems reasonable to assume that the FPI’s hardcore supporters have remained loyal. He has also accrued significant symbolic capital after spending a decade in custody at the ICC. Now that the ICC has dropped all charges against him, Gbagbo can portray himself as a victim of a miscarriage of international justice. Lastly, many of his most faithful supporters come from evangelical backgrounds and see him as a messianic figure, whose acquittal and return are the result of divine intervention.

What will be the impact of Gbagbo’s return on Ivorian politics?

The political movement that Gbagbo created with and around the FPI is weakened and divided into several rival offshoots. After he lost power in 2011, FPI officials engaged in a legal fight over control of the party. In April 2015, the Ivorian judiciary awarded former Prime Minister Pascal Affi N’Guessan management of the party. Under N’Guessan’s leadership, however, the FPI has faced opposition from a splinter group known as Together for Democracy and Sovereignty, whose supporters have always considered Gbagbo to be the party’s leader, even when he was detained. At the same time, the former youth minister, Charles Blé Goudé (aged 49), who was also acquitted by the ICC, while detained in The Hague led the Pan African Congress of Youth and Patriots, an organisation that seeks to represent young voters and could become a competitor of the ageing FPI.

Upon his return, Gbagbo should set about reuniting the various sub-groups and preparing for his succession. But he should also keep a low political profile to avoid upsetting the Ivorian authorities. While it is possible that Gbagbo could completely withdraw from the political scene and even distance himself from his own movement, that move would be surprising for a man who has spent his entire life in politics. Besides, he is expected to visit the FPI headquarters as soon as he is back to show his willingness to reunify his party.

The balance of power is strongly tilted in favour of the president’s party, which controls the executive, legislative and military branches. Nothing suggests that this will change.

Gbagbo’s return is unlikely to shake up Ivorian politics. The rapprochement between the PDCI and the FPI, a process that began before the October 2020 presidential election, will probably remain limited to the good relationship that Gbagbo now seems to have with Henri Konan Bédié, the PDCI’s leader, whom he could visit in the near future. But without any impending electoral deadlines and with the FPI in the midst of rebuilding itself, it appears difficult for the two parties to reach an immediate agreement on a strategy to defeat Ouattara’s Rally of Houphouëtists for Democracy and Peace. The balance of power is strongly tilted in favour of the president’s party, which controls the executive, legislative and military branches. Nothing suggests that this will change.

Will Gbagbo’s return to Côte d’Ivoire help reconciliation efforts and bring an end to the Ivorian conflict?

The authorities say that Gbagbo’s return is part of national reconciliation efforts. After previous reconciliation attempts failed, however, it presents a challenge for Ivorian politics as a whole. Some months before the October 2020 presidential election, several of Gbagbo’s spokespersons emphasised the need for “a reconciliation of Ivorians”. Reconciliation is a longstanding objective in Côte d’Ivoire. A national reconciliation forum was set up in 2001, followed two years later by a “national reconciliation package”. Both of these initiatives failed due to a lack of good-will among political forces that built their success on ethnic and regional divides, and by supporting one ethnic group over the other, rather than acting in the interest of all Ivorians. Successful reconciliation would have weakened the main political parties’ voter base.

Shortly after taking office in July 2011, President Ouattara’s administration set up a truth and reconciliation commission. Political wrangling undermined the work of the commission, which was understaffed and underfunded. Faced with a choice between achieving its stated aim of reunifying Ivorians and its wish to consolidate its own power, Ouattara’s government prioritised stability and economic growth over reconciliation. As part of this reconciliation process, the courts focused on Gbagbo’s group and overlooked the fact that pro-Ouattara officers and militia were also suspected of committing serious crimes, such as the massacre of at least 800 people in Duékoué in March 2011.

In the days following his return to Côte d’Ivoire, Gbagbo should make a speech on the subject of national reconciliation. Such an address would be important because the former president, who is one of the country’s most influential politicians of the past three decades, could use it to encourage a large group of his followers to join the reconciliation process, making it far more inclusive. More importantly, Gbagbo’s return offers a last opportunity for three historical leaders who are approaching the end of their political careers – Bédié, Ouattara and Gbagbo – to come together in a joint call for national reconciliation.

That said, other political actors should also address the root causes of the disputes and the violence. A solution that revolves around individual actors would obscure the structural causes of the country’s political crises. Gbagbo’s absence from the country in 2020, for instance, did not prevent political violence. As Crisis Group mentioned in its last briefing, the country’s crises are symptomatic of a lack of rule of law and a political system shaped by a constitution that gives greater weight to the presidential office than to the legislative and judicial branches.

While seeking reconciliation in society, politicians should take advantage of the moment to continue dialogue on political and electoral reforms which began in December. Besides constitutional reforms aimed at reducing presidential powers, reforms should prioritise two institutions in particular. Both the Electoral Commission and the Constitutional Council’s independence have been the subject of debate in every presidential election since 1995 and issues that have led to violent confrontations both before and after the voting. Such a dialogue would enable Côte d’Ivoire to turn the page on its political disputes and pay more attention to the jihadist threat on its northern borders.

Côte d’Ivoire’s presidential election, scheduled for October, risks heightening the country’s deep-rooted political tensions. In this excerpt from the Spring Edition of our Watch List 2020 for European policymakers, Crisis Group urges the EU and its member states to push for dialogue between the ruling party and the opposition and develop tangible structures for electoral observation.