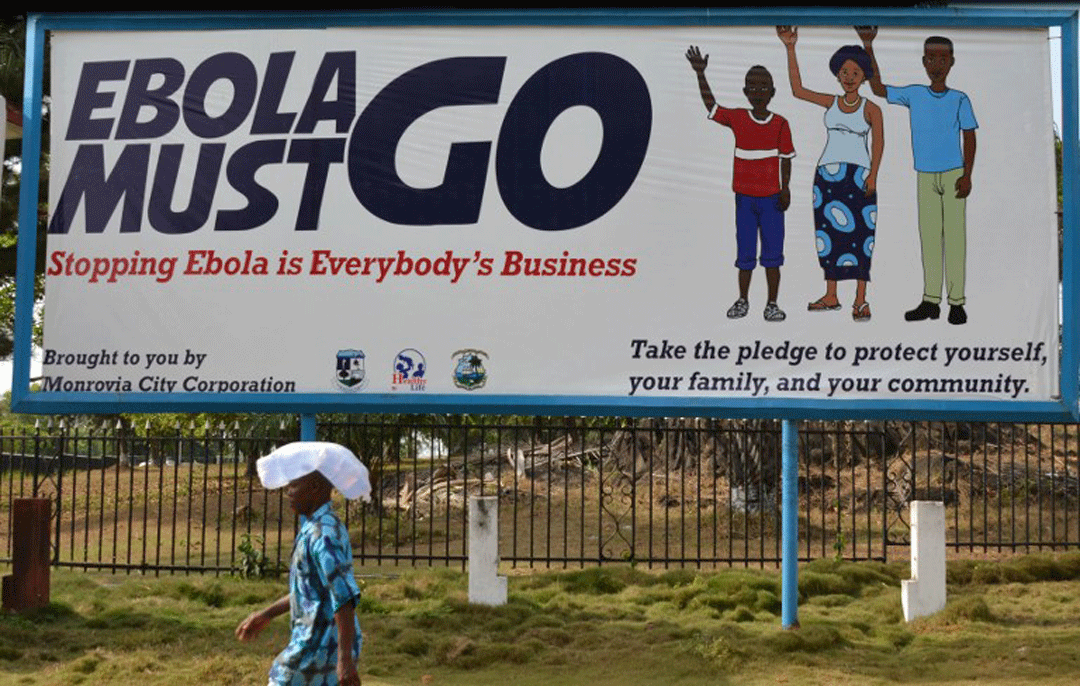 A man walks past an ebola campaign banner with the new slogan “Ebola Must GO” in Monrovia, Guinea, on 23 February 2015. AFP/Zoom Dosso
Commentary / Africa 14 January 2016

Ebola is Over. But West Africa’s Public Health Challenge Remains

Today the Ebola epidemic in West Africa has formally ended. At its height in mid-2014, there were concerns social order in Guinea, Liberia and Sierra Leone could collapse. International mobilisation, notably after the UN Security Council declared the epidemic “a threat to peace and security” on 18 September, brought an extensive intervention and steady progress in reducing the virus’ spread.

Now the focus has turned to preventing the re-emergence of Ebola or a similarly virulent disease. Most of the effort is understandably on better disease surveillance and strengthening the region’s weak health systems, but missing is a focus on the governance challenges that allowed the initial Ebola outbreak to spread unchecked for months. Lack of trust in the state, its institutions and leaders was a major reason people did not heed warnings and advice on how to respond. Nor was the international community beyond reproach. It prevaricated, and mostly ignored early and clear warnings until the threat was perceived as global. Unless these lessons are learned, the next regional health crisis will be as needlessly costly and disruptive.

The epidemic might not have been preventable; it certainly was controllable in the early stages.

As Crisis Group noted in its report The Politics behind the Ebola Crisis, 28 October 2015, the virus initially spread unchecked not only because of the weakness of epidemiological monitoring and inadequate health system capacity and response, but also because people were sceptical of what their governments were saying or asking them to do. Lack of trust in government intentions, whether in the form of political opportunism or corruption, was based on experience. In its initial phase, many West Africans thought Ebola was a ploy to generate more aid funding or reinforce the position of ruling elites. And when Ebola proved real enough, political machinations and manipulation needlessly hindered the early response.

Initially, information was not shared, and warnings were not disseminated widely enough. Countries hesitated to declare an emergency for fear of creating panic and scaring away business. Once they did so, their governments relied on the security services – their most capable institutions – but the early curfews and quarantines exacerbated tensions and alienated people whose cooperation was necessary to contain the epidemic. Officials in capitals also initially ignored local authorities, who were sometimes more familiar with traditional customs and accepted by their communities (with the exception of Guinée Forestière, where appointed local authorities were no more familiar with local customs or trusted than the national government).

It was only after the second wave of Ebola cases threatened the very stability of the affected countries that authorities took concerted action (with the help of NGOs, international agencies on the ground and donors), starting with the engagement of community leaders. Particularly in Liberia, they slowly learned what did not work and how to better communicate appropriate precautions and necessary cultural changes, eg, handling of deceased relatives, that finally helped bring the epidemic under control.

The international reaction was equally problematic and rightly criticised as dysfunctional and inadequate by many observers. Early warnings were largely ignored until cases began cropping up in the U.S. The World Health Organization (WHO), which had stalled for far too long on declaring an international health emergency, then proved incapable of mounting an effective response. The Security Council was forced to create a new body to scale up and coordinate operations – with variable results – the UN Mission for Ebola Emergency Response (UNMEER).

Divorcing political consideration from the response to public health crises should be a priority. It requires transparency from governments, opposition groups and international organisations. As a first step, West Africa’s still fragile states need to learn from and allay fears over actions taken against Ebola, as well as account for the use of Ebola-related resources. The movement toward greater regional cooperation, with regards to both transmissible disease and other transnational threats, is at least one positive development emerging from the crisis. Sustained international support is likewise necessary in the recovery process. Donors and implementers must also learn from their own failings during the Ebola response. The epidemic might not have been preventable; it certainly was controllable in the early stages. Avoiding a repetition requires addressing the errors of the past.

Note: One new case of Ebola was reported in Sierra Leone on 14 January, shortly after this commentary was published.

Principles or Pragmatism? How to React to West Africa’s Slew of Coups

The Complexities of Calling a Coup a Coup