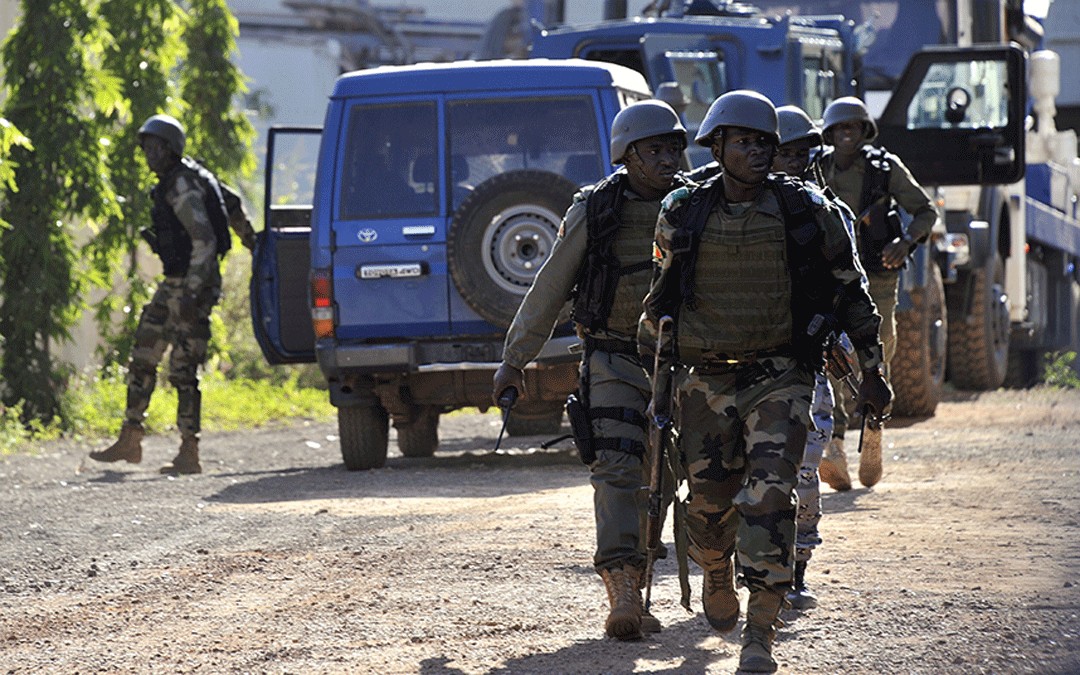 What Could Be Behind the Bamako Attack?

In this Q&A, we talk to our Senior Sahel Analyst Jean-Hervé Jezequel about this raid, how it might relate to the Malian stumbling peace process, or whether a more global dynamic could be at play.

Crisis Group: How much do we know about the identity of the attackers in Bamako and about what they are trying to achieve?

Jean-Hervé Jezequel: This attack might be related, in my opinion, to two different contexts: the local one, principally the Malian peace agreement, with possible spoilers trying to derail the process, and the global one, in which of course Islamic State (IS)’s name has come up. The attack may also result from a combination of both the local and global contexts: an attack that has been planned for a long time may have been accelerated following the Paris event.

I should first underline that there has never before been any solid evidence of any IS presence in Mali. It’s very hard to analyse and react to an attack so soon after it happens and on which we have very little solid information, at the same time as there are so many unchecked rumours. Commentators should avoid any premature assumption of a link with IS, since this risks a counter-productive overreaction in Mali and may overstate IS’s role.

Northern Mali fell to Al Qaeda-linked separatist groups in March-April 2012, which were driven out by a French-led operation in early 2013. A peace process and a deal in June this year – Crisis Group called it an imposed peace – has stumbled from the beginning, and agreements on ceasefires have been repeatedly broken. Where does it currently stand and how does it relate to the attacks?

The Malian peace process has made progress in the last few months, with the signing of the agreement on 20 June and more recently the signing of local agreements in Anefis (near Kidal) on 16 October. On 19 October, three days after the Anefis meeting, Iyad ag Ghaly, the Tuareg leader of Ansar Eddine (one of the jihadi groups that occupied northern Mali in 2012), released an audio file in which he criticised the “secular movements”, by which he probably meant the ones that met in Anefis. He accused them of “betraying the people of Azawad” and helping “an apostate government” retake control of the north in exchange for small privileges, positions and limited gains.

Iyad ag Ghaly also repeated his call for holy war against the French “crusaders”. He congratulated radical groups from southern and central Mali for their recent actions and tried to position himself as the leader of the several groups engaged in violent jihadi extremism in Mali. Indeed, two radical groups have been active and targeted Malian security forces in the last few months: the Macina Liberation Front (very active in central Mali and mostly recruiting among ethnic Fulanis) and Ansar Eddine’s so-called Branch for Southern Mali.

Radical groups have been excluded from, and have conversely refused to take part in, the Mali peace talks in Algiers. They have been repeatedly hit by French forces, whose targeted killings included some of Iyad ag Ghaly’s close associates. The recent progress made in the peace process, especially after the Anefis meeting, may put an end to ongoing fighting between armed groups, which is a threat for radical leaders.

This local dynamic could be one of the drivers, or even the main driver, behind the attack. Yet here again we should not make any premature assumptions. Pointing fingers at some individuals or communities before we get solid evidence might prove dangerous in the current context.

How likely is it that there is a link between the hostage crisis and the attacks in Paris?

It is possible to construct a hypothesis that would relate the attack to more global dynamics and possibly to the recent strike in Paris. By hitting both Malian citizens and foreigners in Bamako, the group responsible for the attack might be trying to deliver a strong message of opposition to the French intervention in Mali and, possibly also, on the risk for local states in associating themselves with Westerners. To this extent it may be related to groups trying to target or punish France and its allies.

However, the presence of the Islamic State in Mali is unclear. If it turns out to be linked to the Bamako raid, it would be the first time that movement has taken action or been seen to be present there. IS certainly has no official representative or presence in Mali, even if there were rumours this summer that some radical leaders active in the north were looking for an IS affiliation.

It might also be Ansar Eddine or al-Qaeda in the Islamic Maghreb (AQIM) are trying to become more active, so as to counterbalance IS’s possible growing influence in the region more broadly. IS’s responsibility for spectacular recent outrages in France, Egypt and Lebanon are indeed a threat for them, since the al-Qaeda groups might seem to be losing prominence in the spectrum of violent extremist movements.