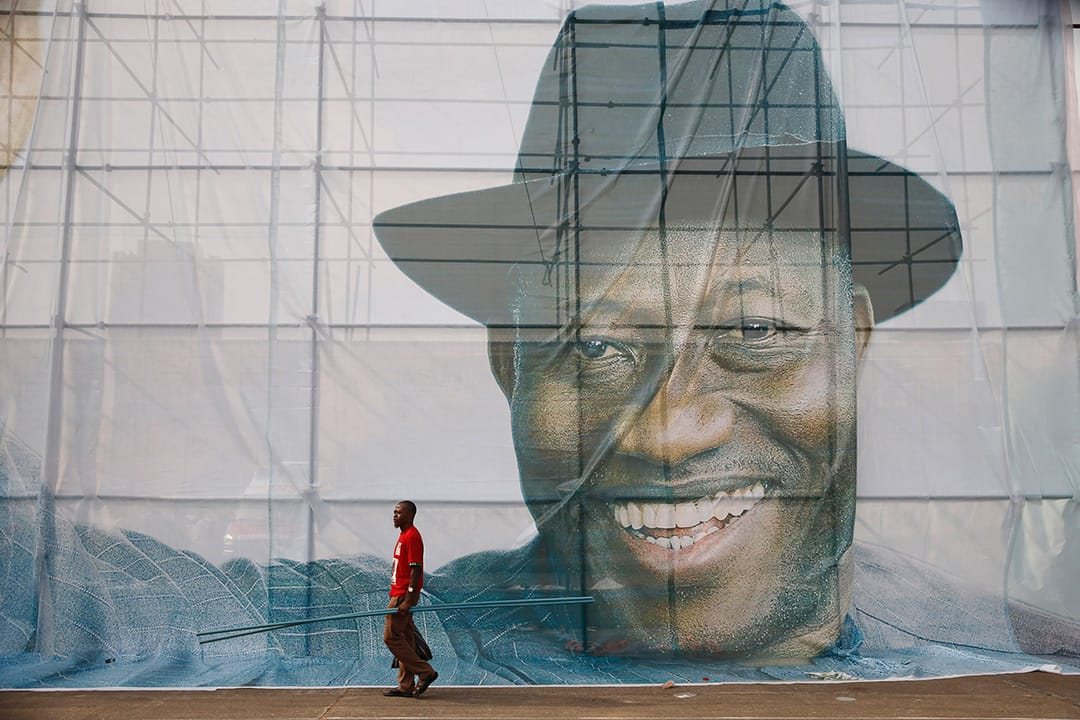 A man walks past a portrait of Nigeria's President Goodluck Jonathan, who began his campaign on Wednesday for a second-term in office in Lagos January 8, 2015. REUTERS/Akintunde Akinleye
Impact Note / Africa 22 April 2016

Against the Clock in Nigeria

Advocacy Against the Clock

In 2014, Crisis Group’s Africa Program became convinced that Nigeria risked bloody confrontation after presidential elections then scheduled for February 2015. The organisation played a leading role in mobilising the international community to take action that successfully headed off potential new violence in one of the continent’s most influential countries.

Early on, our field research revealed clear signals that if either President Goodluck Jonathan or his main challenger General Muhammadu Buhari refused to accept defeat, violence was likely to erupt on a scale that could eclipse the 2011 post-election clashes that killed over 800 people. Building on our analyst’s inside-out knowledge of the country, our early and consistent messaging right up to the vote helped spur concerted international and local pressure that persuaded Jonathan to respect the results of the election and step down.

Crisis Group has been shedding light on Nigeria’s political and security problems since 2003, from Niger Delta militancy to the Boko Haram insurgency and election-time violence. Our Senior Analyst for Nigeria Nnamdi Obasi could see that with friction along the country’s regional and religious fault lines mounting, the 2015 elections would be more contentious than any since the return to civilian rule in 1999.

Supporters of both Jonathan, a Christian from the Niger Delta, and Buhari, a Muslim from the far north, were uncompromising in their claims to the presidency. The Niger Delta camp believed that since their region was the source of the country’s oil wealth, their man was entitled to a second term, while sentiment in the north had hardened against Jonathan due to his perceived slow and half-hearted response to Boko Haram. Factional divisions within the main parties, fierce local competitions and inadequate preparations by the electoral commission all pointed to a flare-up.

In February 2014, a year before the elections, Obasi and other senior staff decided they should act to fulfil Crisis Group’s primary mandate, to prevent deadly violence. The government and political parties were pursuing their interests with little thought of the consequences. International partners were aware of the risks, mindful of the 2011 carnage, but their concern was not translating into the necessary preventive action. We raised the alarm to persuade influential partners to press home to the Nigerian protagonists how disastrous the consequences would be if they did not run peaceful campaigns and accept the final results.

For much of 2014, Obasi criss-crossed the country to prepare an elections-focused report, listening to voices from all corners of Nigeria’s diverse and deeply fractured nation. Already in June, we put Nigeria on our Early Warning Watch List and began sending confidential monthly updates to the European Union (EU). We made sure member states were fully aware of the rising tensions and called on the EU to caution campaigners to refrain from inflammatory rhetoric. Heeding our call, the head of the in-country EU delegation publicly urged the Nigerian government and media to avoid hate speech.

In November 2014, we published Nigeria’s Dangerous 2015 Elections: Limiting the Violence, explaining in detail why and where violence could break out and how it could be avoided.

The Coordinator of the UN Response on the Regional Impact of Boko Haram, Assistant Secretary-General Parfait Onanga-Anyanga, quickly called Obasi to ask for our insights on how Boko Haram’s attacks could affect the elections. He described his hour-long telephone briefing as “highly valuable”.

In the four months leading up to the vote, the report web pages received 19,530 views – a Crisis Group record.

With three months to go before the scheduled vote, we intensified our efforts. In Abuja, Obasi delivered his findings and recommendations on TV and in the corridors of power: the main political parties, the electoral commission, the military and police. Some appreciated our insights, others were dismissive. Top army officers welcomed our suggestions on how the security forces could contribute to peaceful polls. The National Publicity Secretary of the then ruling People’s Democratic Party (PDP), on the other hand, listened attentively but rejected the report as “alarmist” and called Crisis Group a “foreign fault-finding organisation”.

In Dakar, Obasi and West Africa Project Director Rinaldo Depagne explained our warnings at a seminar on the region’s elections and convened a press conference to draw attention to the dangers in Nigeria. Obasi travelled to brief policymakers in Washington DC, New York and Ottawa. To maximise leverage on the main candidates, we pushed for collective and aligned international pressure, recommending high-level engagement before the vote, and suggesting that an African face would likely be most palatable to Nigerian politicians. In New York, a West Africa specialist in the UN Department of Political Affairs said the report was “extremely timely...exactly the type of top-notch analytical work that has defined ICG over the years”.

Nnamdi Obasi, Senior Analyst for Nigeria, explains the risks of violence around the 2015 elections in a Crisis Group video interview on 21 November 2014, the day we publish a major elections-focused report. CRISIS GROUP
In New York, a West Africa specialist in the UN Department of Political Affairs said the report was “extremely timely...exactly the type of top-notch analytical work that has defined ICG over the years”.

Our message, pressed in private and echoed by other credible organisations, began to sink in, reinforcing the good intentions of statesmen. Ahead of a January 2015 visit to Nigeria by former UN Secretary-General Kofi Annan, a former Crisis Group board member, one of his advisors called Obasi for his take on the lay of the land. Annan’s mission made a breakthrough when he brought the candidates together to sign the Abuja Accord, a pledge to eschew hate speech and respect the vote’s outcome.

As Jonathan had repeatedly shown an open ear to U.S. positions, it was vital to ensure the State Department was fully briefed. The director of its Nigeria Policy and Operations Group said he “benefited tremendously” from Obasi’s visit on 3 December 2014 and that our reporting helped them “orient [their] efforts”. In late January 2015, U.S. Secretary of State John Kerry travelled to Abuja to make crystal clear that the U.S. expected respect for any election result.

The need for mitigating measures became ever more apparent and urgent. When the electoral commission postponed the polls from February to March, apparently to give Jonathan more campaigning time, tensions spiked. We sounded the alarm in a new commentary, “Nigeria’s Elections: A Perilous Postponement” (12 February 2015). In early March, former South African President Thabo Mbeki added his voice to the chorus now urging the candidates to heed the ballot box. The National Peace Committee, a group of eminent, non-partisan citizens, quietly insisted on peaceful elections.

But at the last minute, now fully aware of just what a hostile international environment he would otherwise face, Jonathan accepted the people’s decision.

In the days before the vote, opinion polls put Buhari ahead. Jonathan looked likely to lose, but his party, with sixteen years in power and access to deep state resources, still seemed highly unlikely to accept defeat. Former militant leaders in the Niger Delta said they would consider a Buhari victory a “declaration of war”. On 24 March, Obasi published another Crisis Group commentary pushing for last-minute diplomatic engagements and a crisis response plan.

On election day, a Saturday, Obasi was in Port Harcourt in the Niger Delta. Fears of fighting had turned the bustling oil city into a ghost town. By Monday evening it was clear that Jonathan had lost. Party hardliners wanted the president to dig in; one rejected the results outright. But at the last minute, now fully aware of just what a hostile international environment he would otherwise face, Jonathan accepted the people’s decision. Obasi heard gunshots the night before the vote, but the speed with which Jonathan conceded defeat convinced many loyalists there was no point in fighting.

Nigeria’s presidential transition was not violence-free. Over 50 people were killed in election-related strife in the months leading up to the vote and at least another 50 died in clashes on election day and the day after. But the toll was far less than was feared.

While many organisations warned of the risks of bloodshed, Crisis Group’s early, consistent and compelling messaging was a vital component in the international community’s diplomatic campaign to ensure Nigeria’s successful political transition.