What Would Make A Woman Go Back To Boko Haram? Despair

In northeastern Nigeria, the militant group exploits a broken social system. There are lessons here for the rest of the world.

Zahra and Amina seem like lucky survivors of the scourge of northeastern Nigeria, the jihadist movement known as Boko Haram. Both were wives of fighters. Zahra escaped by agreeing to detonate an explosive vest that the militants strapped to her. After walking miles to her intended target, a government checkpoint, she turned herself over to soldiers. Amina fled with her three children after her husband was killed in battle.

Today, both women live in a camp for survivors of the conflict in the northeastern city of Maiduguri. When I met them on a recent research trip to the city, the last thing I expected to hear was that they wanted to rejoin the insurgents. Conventional thinking and security policies that aim to dissuade women from extremist groups tend to focus on ideology, presuming that only brainwashing could compel them to voluntarily join radical, violent militias. But here in the northeast, some women have largely been compelled to affiliate with Boko Haram by social and political conditions. Perversely, the group offers them respite from insecurity and the limited opportunities afforded them in a deeply patriarchal society riven by poor governance.

Zahra and Amina say that when they were with the militants, life was harsh and uncertain, but they had enough to eat. As voluntary wives of fighters, they were protected from sexual predation. They attended religion classes, the first formal schooling many had ever received, and their children went to school, learning literacy and religion. There were courts where women could report abusive husbands. In contrast, in their now emancipated lives in the camp, they often go hungry. There is little chance to work to buy more food, and shortages have contributed to sexual exploitation by the security forces who guard them. “Most Boko Haram women regret coming here, because life is just so hard,” says Amina.

These two women are just one small part of a massive humanitarian and security crisis that has been unfolding across the Lake Chad basin – the area where Nigeria, Niger, Chad and Cameroon meet – since 2014. Overshadowed by the conflicts in Syria and Yemen, the scale of humanitarian disaster in the region is nevertheless vast: more than 2.4 million people displaced, 5 million in need of food and shelter, and half a million children at famine levels of malnourishment.

While the Boko Haram insurgency may not directly affect the west – it doesn’t contribute to migration flows and the militants are not involved in attacks in Europe – the experiences of Boko Haram women carry wide implications for our understanding of why people join such movements. While the group, like many others that self-identify as “jihadist”, deploys ideological rhetoric to promote its political goals, it is the deprived and fractious context in which it operates that best explains its appeal – especially to women. 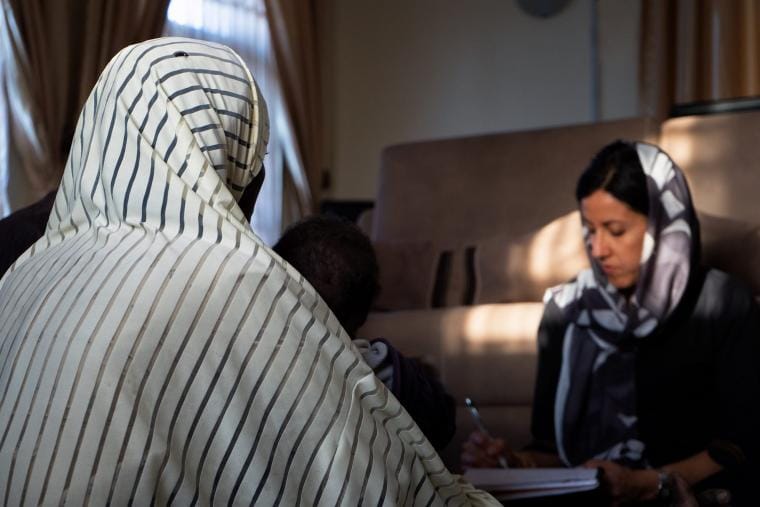 Zahra and Amina, like many women in the northeast, joined the militants by choice. They left by choice, too – unwilling to marry other fighters appointed by the group after their own husbands had died. Their stories challenge the dominant narrative around Boko Haram, shaped by the global outcry over the Chibok schoolgirls’ kidnapping, which holds that women only join by force, and that, similarly, only those who were abducted can be regarded as genuine victims. Returning from Nigeria, I met a group of Swiss women who regularly spend their holidays doing freelance volunteer work with female victims of Boko Haram. “We only help the ones who were kidnapped,” one pointedly told me.

But the circumstances that propel women such as Zahra and Amina into and out of Boko Haram show the limits of the neat categories of victim and perpetrator. In the early days of the insurgency, many women found the movement appealing because it offered alternatives to the patriarchy endorsed by their conservative families. The group’s leaders supported lower dowries, which meant more young women could choose husbands from among their peers, rather than the greying, financially secure men they would be traditionally compelled to marry. And while the militants were only able to provide for them so generously by looting and pillaging, some women felt the Nigerian state’s corruption justified these abuses. Life in the forest felt freer and more dignified than living in the dust of an internally displaced persons’ (IDP) camp, dependent on international aid groups for a meal a day.

While ending the insurgency and countering the militants’ appeal is obviously vital, it is also essential to recognise what precisely has guided women to join the militants in the first place.

Even now, Zahra’s and Amina’s thinking about the group – their belief that returning to the militants would improve their lives – is mostly a calculus of immediate survival. Dalori II, the camp where they live, like most in the city, is chronically short on food, and across satellite camps in the region groups such as Amnesty International have documented an epidemic of rape and sexual exploitation. Some progress has been made to curtail these abuses, and humanitarian groups have tried to adjust food distribution practices to blunt the potential for abuse, but this has only changed the dynamic of the exploitation. “You have to become a harlot to stay in the camps,” says Amina.

One reason Zahra says she was glad to leave the militants was because she saw that their blind rejection of teaching in English was harming her children: “It does not benefit them to stay home. It’s better for them to learn.” She assumed that in Maiduguri, her kids would be able to attend school. But camp managers in Dalori II dismantled the one school on its premises, claiming it was no longer needed since people would be returning to their villages. But nobody has gone home, and now there is no school.

The northeast Nigerian state of Borno is now a vast patchwork of towns and villages with few men, a whole sub-society of single mothers trying to cope as breadwinners in areas with collapsed economies without their husbands’ protection and support. Some reintegration programmes offer skills training, but embroidering and selling a cap a month neither enables a woman to feed three children nor does it protect her from rape after dark. Plus, some international groups devote funds and attention to what they call “countering extremism”, with extremism often conceived in an amorphous way that views ideology, rather than a complex patchwork of political grievance and social frustrations, as a root cause of the violence.

While ending the insurgency and countering the militants’ appeal is obviously vital, it is also essential to recognise what precisely has guided women to join the militants in the first place. This has wider implications for the whole of the northeast, not just displaced women in the camps, or former Boko Haram women, but all women, who are trying to cope with conditions so impoverished and limiting that, sometimes, joining a militant group appears to offer a way out.