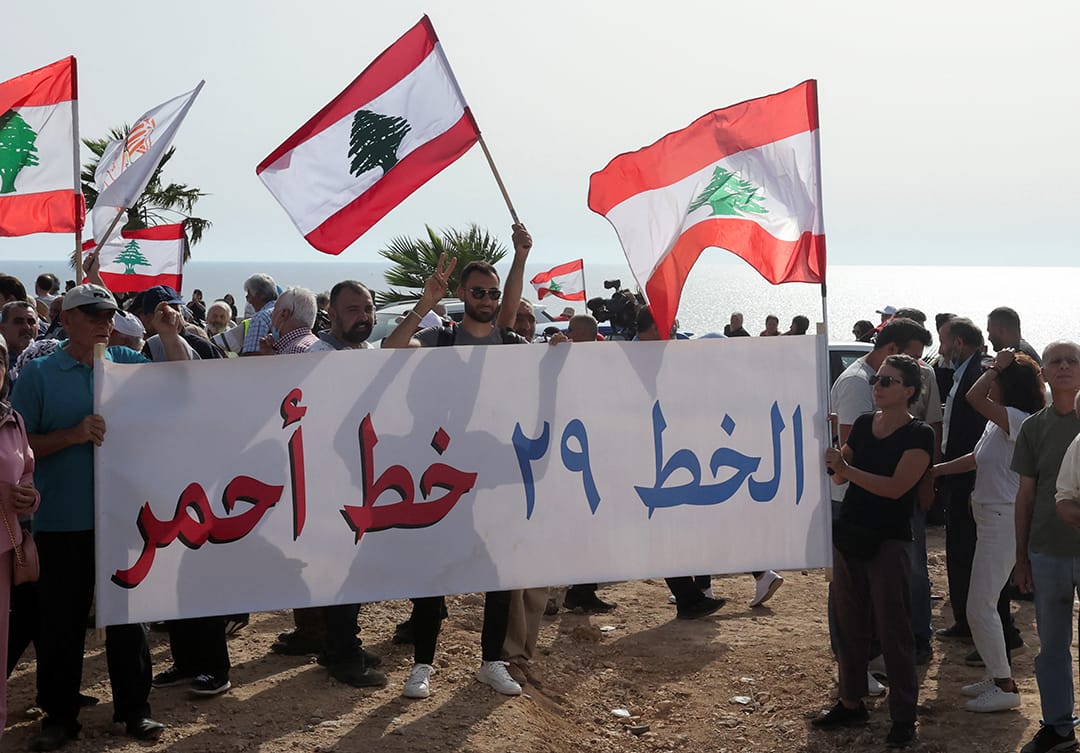 U.S.-mediated maritime border talks between Lebanon and Israel have entered a perilous new phase. The parties have been engaged for over a decade in indirect negotiations over the ownership of natural gas fields discovered, or presumed to exist, in disputed offshore territory. Israel is reportedly on schedule to start extracting gas from the area as early as September. These plans have prompted Hizbollah – the powerful Lebanese Shiite militia and party – to threaten attacks if Israel proceeds without first resolving the territorial dispute. While the two neighbours are reportedly closer than ever to an accord, political crises in both may delay the agreement or make reaching it impossible. Washington has invested significant political capital in fostering a compromise, and it should intensify its efforts to help the two negotiating teams clear the remaining hurdles. Israeli and Lebanese leaders, for their part, should keep their sights trained on concluding an agreement that carries clear mutual benefit, while avoiding a conflict with dangerous consequences for both countries.

Lebanon and Israel have conducted indirect negotiations over demarcating their maritime border since the two sides became aware more than a decade ago that lucrative gas deposits may lie off their shores. Originally in dispute were 860 sq km of waters between the southern boundary of the Lebanese claim (known as “line 23”), which it formally asserted under the UN Convention on the Law of the Sea (UNCLOS), and the boundary Israel sought to draw to the north (known as “line 1”). In 2012, U.S. mediator Frederic Hof proposed a compromise that would have split up the area at a ratio of 55 per cent for Lebanon and 45 per cent for Israel. But – without offering clear reasons – the Lebanese government failed to approve the proposal and the negotiations lapsed. When indirect talks resumed in late 2020, the Lebanese delegation presented new legal and hydrographical studies to support an expanded claim (bounded by what is known as “line 29”) encompassing an additional 1,430 sq km south of line 23; it did not, however, formalise the expanded claim by amending its prior UNCLOS filing, which remains pegged to line 23.

Lebanon’s subsequent insistence on staking its claim based on line 29 has brought previously undisputed gas reserves into play, setting the stage for the recent escalation of tensions. Under Lebanon’s original line 23 claim, the Karish field – the one from which Israel is preparing to extract gas as soon as September – lay far to the south in Israeli waters. By contrast, the new Lebanese claim would put the northern half of Karish in Lebanese maritime territory, turning the field into a source of contention. Predictably, Israel has rejected the new Lebanese position, and the parties have struggled unsuccessfully to narrow the gap between them – engaging first through five rounds of indirect talks at the UN base in Naqoura, a small city in southern Lebanon, and then via shuttle diplomacy conducted by U.S. mediator Amos Hochstein. Meanwhile, on the Israeli side, preparations have continued for Karish’s development, which is expected to add around 1.41 trillion cubic feet of gas to Israel’s proven reserves. The expected quantity of gas available at Karish falls well below the estimated size of the Leviathan and Tamar fields, which Israel is already exploiting, suggesting that Karish is not integral to Israeli energy security at present.

In June, Israel signalled that it could begin extraction at Karish in a matter of months. On 5 June, the London-listed company Energean – which Israel has enlisted to develop Karish on its behalf – deployed a floating production, storage and offloading facility to the field. Israeli officials point out that the company began its work at a spot clearly south of line 29, and also note that Lebanon has never amended its UNCLOS filing to bring its claim to that line. Thus, Israel argues, Lebanon has not formally claimed the area where Energean is working.

Hizbollah ... has vowed to defend the country’s maritime claims.

These arguments have triggered a harsh response in Lebanon – particularly on the part of Hizbollah, which has vowed to defend the country’s maritime claims. In several speeches, the party’s secretary general, Hassan Nasrallah, maintained that the Karish field is disputed. He threatened to attack the offshore gas infrastructure if Israel began extracting gas before the two countries agreed on a border. On 2 July, Hizbollah’s military wing, the Islamic Resistance, deployed unarmed reconnaissance drones toward Karish, which the Israeli air force intercepted. Two days later, Lebanese Prime Minister Najib Mikati publicly denounced interference in the negotiations by non-state actors, saying it exposed Lebanon to “unnecessary risks”. Undeterred, Nasrallah spoke of military action if the dispute was not settled by September. On 31 July, Hizbollah released a video displaying its capacity to attack gas infrastructure. The same day, the group published footage of black-clad fighters patrolling unarmed near the Israeli-Lebanese border.

With Hizbollah putting its credibility on the line, and Israel doubtless reluctant to back down in the face of threats from a group that it characterises as a terrorist organisation, the risk of some form of escalation is significant. While Nasrallah expressed hope that the dispute can be resolved without a fight, Hizbollah’s brinkmanship – in marked contrast to the more cautious approach to Israel the group has taken in recent years – suggests that the organisation is prepared to take greater risks this time. Even a limited military confrontation could spin out of control, due either to miscalculation about the other side’s red lines or to operational error – such as a missile or drone attack aiming to inflict only material damage but causing casualties instead.

That said, there are grounds for hope that a confrontation can be averted. Despite the threat of conflict, or perhaps because of it, the two sides now appear closer to a deal than ever. During U.S. mediator Hochstein’s last visit to Beirut on 31 July, Lebanon reportedly proposed a compromise that moves its claim back from line 29 to line 23, on the condition that Israel cedes an additional 80 sq km south of line 23. This extra pocket of maritime territory would put the Qana prospect – a gas deposit of unproven potential to the north east of Karish – entirely within Lebanese waters. In practical terms, the suggested compromise treats Lebanon’s claim to line 29 as a bargaining gambit to secure its claim up to line 23, along with the entire Qana prospect.

Israel is reportedly ready to accommodate this proposal, which would entail giving up on the nearly 400 sq km north of line 23 it was supposed to receive under the 2012 Hof proposal, as well as Qana. It is possible that Israel may ask for a share of future proceeds from Qana should gas exploitation prove viable, or for territorial compensation north of line 23, which would mean an S-shaped rather than a straight demarcation line. While Israel’s official response to the Lebanese proposal remains unknown at this stage, a territorial swap would appear to be a more straightforward solution than a profit-sharing arrangement, given the antagonism between the two countries.

Israeli officials also told Crisis Group that they would welcome ... resolving disputes through negotiation, rather than violence.

Israel has good reason to make such substantial concessions. The energy crisis in Europe, triggered by the war in Ukraine, provides a window of opportunity to expand gas exports. But if that is the goal, securing stable access to the offshore reserves is imperative – and that will require an accommodation with Hizbollah and Beirut. While Israel may be confident that it can defeat Hizbollah in a military confrontation, private corporations are unlikely to undertake investments and expose staff and multi-million-dollar equipment if they risk being caught in the crossfire. Israeli officials also told Crisis Group that they would welcome the precedent a deal would set for the two countries resolving disputes through negotiation, rather than violence.

For Lebanon, wrapping up the negotiations swiftly would also be a win, not least because it would receive a far larger share of the disputed maritime area than appeared possible even a few months ago. A comprehensive solution to the demarcation issue would also clear the way for exploration in Lebanon’s promising southern waters. Until now, the international consortium commissioned to explore the area, led by French energy giant Total, has made clear that operations cannot proceed before the parties resolve their dispute. As for Hizbollah, despite its bellicose posture, it has never committed to defending any specific line, and has repeatedly stressed that the Lebanese government alone is responsible for reaching a settlement; that said, Hizbollah would likely take credit for helping Lebanon achieve a favourable outcome if a deal is struck.

Yet despite an accord being within reach and to clear mutual benefit, the process may still falter in the final stages because of dysfunctional domestic politics on both sides. Lebanon’s politicians have been unable to form a new government since the country’s elections on 15 May. Leaders are increasingly preoccupied with the debate over the succession of President Michel Aoun, whose term expires on 31 October, and the spectre of an open-ended constitutional crisis if no compromise on his replacement can be found. This matter has reduced Beirut’s bandwidth for the border negotiations, and indeed for major political decisions of any kind. There is also a risk of last-minute sabotage by leading Lebanese politicians, who have long competed with one another to claim personal credit for a successful outcome in the maritime talks. In Israel, the ruling coalition’s collapse has left a caretaker cabinet in charge that likewise finds it difficult to make big decisions. With elections approaching in November, hardliners may exploit any border compromise for political attacks.

It would be a missed opportunity for both sides, and a blow to regional stability, if an otherwise achievable agreement were to fall through for any of these reasons. After more than a decade and many false starts, the maritime border negotiations are tantalisingly close to a viable solution. As the parties move toward a deal, outside actors that have influence with key players in each system should urge them forward over the finish line. The U.S., whose shuttle diplomacy has contributed significantly to the process, should in particular redouble its efforts to get the deal done. It may need to hold more regular meetings with, and lean on, the two countries’ negotiators to get them to recognise the matter’s urgency. Washington should also encourage Lebanese interlocutors to dissuade Hizbollah from hardening its confrontational stance and Israel to hold off on gas extraction while the deal is hammered out – even as it works to maintain the talks’ momentum and keep them from being held hostage to political developments in either country.

Ultimately, it will fall to Israeli and Lebanese political leaders to make the deal happen. Their task may be difficult amid jockeying for electoral and partisan advantage. The prize, however, is well worth the trouble. The parties have the chance to make an agreement that is good for both countries, sets an important precedent for greater bilateral comity and averts the prospect of dangerous escalation. They should seize it.