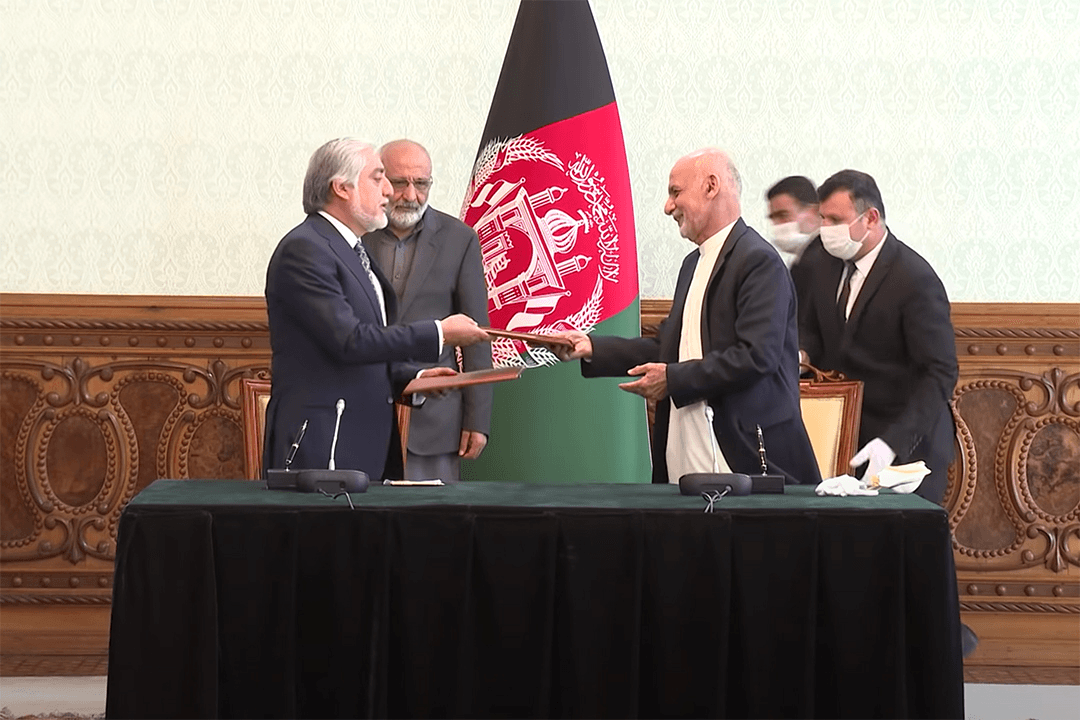 Abdullah Abdullah, left, and President Ashraf Ghani signing a power-sharing deal in Kabul, Afghanistan, on 17 May 2020. Screenshot of video recording by the Presidential Palace of Islamic Republic of Afghanistan - ARG
Q&A / Asia 20 May 2020

On 17 May, Afghan President Ashraf Ghani and his chief political rival Abdullah Abdullah signed a power-sharing agreement intended to resolve a dispute over last September’s election. In this Q&A, Crisis Group expert Andrew Watkins examines the deal and its portent for stalled peace talks.

Why was the Ghani-Abdullah agreement needed and what does it achieve?

President Ashraf Ghani and former Chief Executive Officer Abdullah Abdullah, as well as their respective allies, had been locked in a dispute over the results of Afghanistan’s presidential election held on 28 September 2019. While preliminary numbers suggested that Ghani held a firm lead, official results were delayed for months as electoral bodies conducted recounts and, later, audits. Final results that gave Ghani just over 50 per cent, which would narrowly avoid a run-off against Abdullah, were abruptly announced in February, before the electoral complaints process was completed. Abdullah and his supporters declared the results invalid and announced their intent to establish a “parallel government”. This wrangling culminated in two simultaneous inauguration ceremonies in Kabul on 9 March, but by then foreign governments had shown overwhelming – if measured – support for President Ghani, and Abdullah refrained from further escalatory steps. Since then, both sides have engaged in intensive negotiations on power sharing, punctuated by U.S. Secretary of State Mike Pompeo’s 23 March visit to Kabul, immediately after which he threatened to cut $1 billion in U.S. aid if an “inclusive government” was not formed.

Ambiguities in the agreement suggest the potential for heated debate over its implementation.

The power-sharing agreement names Abdullah as the ostensible head of peace process efforts for the government and the array of unelected powerbrokers. His role appears to entail management and oversight of several pre-existing and newly created bodies for negotiating with the Taliban and for politically overseeing the negotiators. The agreement also includes a number of compromises in government formation and reform: Abdullah’s camp will select half the cabinet, provincial governors will be appointed by a jointly agreed-upon formula involving both Ghani and Abdullah, and the government is supposed to prioritise electoral reforms and local elections. Notably, the ethnic Uzbek leader and former first vice president, Rashid Dostum, who stands credibly accused of multiple human rights violations, will be awarded the military rank of marshal and a seat on the National Security Council.

Aspects of the deal remain opaque. The terms of a leaked draft of the agreement detail the protocol for and authorities of key figures, as well as funding for bodies yet to be established. But the duties of Abdullah’s newly christened High Council for National Reconciliation are only vaguely defined. Such ambiguities suggest the potential for heated debate over the deal’s implementation.

Will the agreement advance the struggling peace process?

Resolving the deadlock in Kabul was likely necessary before the stalled Afghan peace process could progress, but in itself the deal is not sufficient to move things forward. A number of other challenges remain to be resolved before intra-Afghan negotiations – which were supposed to commence on 10 March, per the 29 February U.S.-Taliban agreement – might begin. Some of these have made uneven progress, like the agreement’s provisions for the Afghan government to release up to 5,000 jailed Taliban fighters, and even then only after initial resistance from Kabul, which was not a party to the deal. The Taliban has steadily escalated violence against Afghan security forces. A number of brutal terror attacks, the perpetrators of which are unconfirmed, have rocked the country. The uptick in violence soured the atmosphere for peace talks while the Ghani-Abdullah compromise was hashed out.

Even setting aside obstacles to getting to the talks with the Taliban, key powerbrokers in Kabul and across Afghanistan hold a wide range of views on those talks and the stance of the negotiating team that Abdullah now oversees. Forging consensus among them will be no small challenge. Even if the power-sharing agreement is upheld by both Ghani and Abdullah, nothing prevents further discussion of or changes to the structures, negotiating team or other personalities involved in the peace process. In principle, the new agreement could help energise the peace process by clarifying negotiating leadership on Kabul’s side and providing a framework for Afghan political elites, civil society and other community leaders to reach and maintain consensus. But it does not guarantee that consensus – neither on the modalities of working through the peace process nor on the positions to be negotiated in a political settlement. The deal simply erects a more organised forum for elites to begin debating among themselves.

President Ghani and Abdullah have been in a power-sharing government since 2014. Is this new arrangement any different?

This arrangement differs in several key respects from the National Unity Government (NUG) formed in 2014 after the previous presidential election debacle, also involving Ghani and Abdullah. It also contains points of ambiguity and a number of contradictory elements. The most significant difference between the 2014 compromise, which created the extra-constitutional chief executive officer position for Abdullah, and the new agreement is that Abdullah will not have any executive authority beyond heading peace efforts. This may relieve some of the tension inherent in the NUG’s split executive control. When it comes to matters of protocol, however, Abdullah will now rate as the “second figure of the country, after the president” – somewhat muddying the status of Afghanistan’s two vice presidents.

The deal erects a more organised forum for elites to begin debating among themselves.

The deal includes a key point of contention that has eroded relations between the two leaders over the last five years: the 50-50 split of responsibility for naming ministerial-level appointees. Not all ministries are created equal, as some are more powerful than others and some are better suited for awarding patronage. But the agreement does not specify which ministries will be allotted to which camp and, in the past month, President Ghani has already appointed a number of acting ministers to key posts. There is even less certainty when it comes to selecting provincial governors, which is ordinarily the president’s constitutional prerogative. The text of the agreement refers obliquely to a formula for naming people to these posts. Several foreign diplomats privy to the mediation told Crisis Group that the appointment of governors remained a sticking point right up to the agreement’s signing.

In reality, the 2014 unity government evolved significantly over time. The presidency’s firm constitutional authority, uncertainty regarding the chief executive’s mandate, and the leaders’ personal styles translated into President Ghani consolidating much more than the 50 per cent of executive authority he was supposed to command under the 2014 deal. This history suggests that this latest agreement may also develop into a different political reality than what is now on paper. Indeed, it remains an open question to what extent a high-stakes peace process, one with the potential to dramatically reshape the country’s political and social order, will be left for Abdullah to determine and implement.

Will this agreement fully resolve political wrangling in Kabul?

Almost certainly not, for several reasons.
The agreement does little to address the conditions that led to the dispute in the first place, notably Afghanistan’s recent record of repeatedly flawed and contested elections. Future polls are practically guaranteed to remain an arena of fierce contestation. Electoral reforms are mentioned in the new deal, but were also included in the NUG’s agenda, only to be shelved or stalled. Nor does the Ghani-Abdullah agreement do much to address the centralised political system that makes presidential elections especially fraught, particularly given that other ethnicities feel that the largest ethnic group, Pashtuns, to which Ghani belongs, have long dominated that system. Several Kabul interlocutors told Crisis Group that the provision creating a new advisory council, or High Council of State, comprises opposition leaders in order to mollify Ghani’s opponents. But a consultative body is unlikely to wholly appease these figures or do much to dilute executive power, especially given President Ghani’s widely reputed unconsultative style.

The deal has overcome, at least for now, a political crisis with potentially catastrophic consequences.

Even if the agreement does not resolve the issues underpinning the election dispute, it was sorely needed. It has overcome, at least for now, a political crisis with potentially catastrophic consequences: the impasse not only contributed to slowing the peace process, but the escalation of rhetoric and political theatre risked the unity of the country’s security forces and distracted decision-makers from the national response to COVID-19.

One development offers a sliver of hope: unlike in the electoral crisis of 2014, which grew so tense that armed groups began assembling outside of Kabul, and which ultimately required intensive U.S. arbitration, Afghan political figures, including female leaders of civil society, played outsized roles in mediating the dispute. This mediation did progress under a shadow of intensifying U.S. pressure, but it was nonetheless a new benchmark in domestic conflict resolution in an unsettling time.

The deal’s merit lies in what it might help Afghanistan’s government avoid: confusion and dysfunction at every level of government, erosion of public trust in institutions, and even the potential for state fracture along political allegiances. These risks grew as negotiations continued and the agreement itself will not automatically wave them away. With the war returning to the high levels of violence typical of recent warmer-weather seasons, the effects of the pandemic spreading countrywide, and signs of U.S. patience with Afghanistan’s political disputes and slow-moving peace process wearing thin, it is essential that all parties to this agreement implement it in good faith.