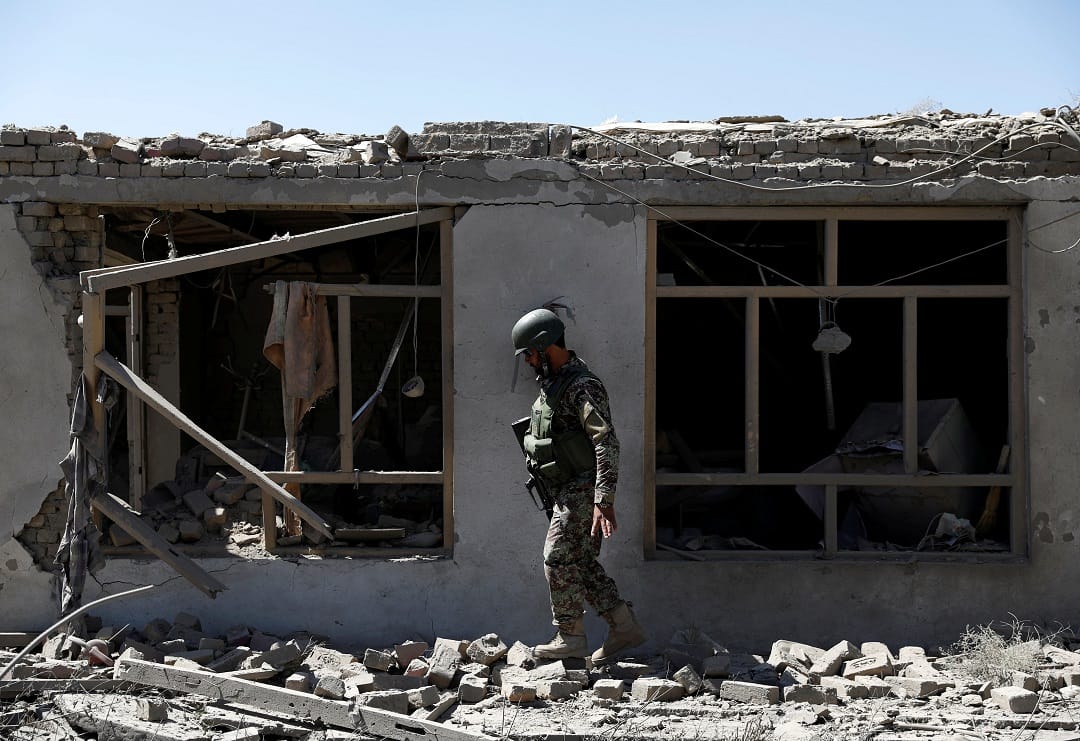 A return visit to Taliban strongholds in rural Afghanistan reveals that hopes for peace last year’s brief ceasefire sparked have dimmed amid growing violence – despite progress in peace talks.

I travelled the war-torn districts of rural Afghanistan in June, searching for a lost feeling. I had visited the same rural areas a year earlier during the brief ceasefire that stretched through three magical days of June 2018. It was the first nation-wide ceasefire in the two decades since the U.S. invasion. Taliban fighters hugged their enemies, joining members of the Afghan security forces in celebrations of the Eid al-Fitr holiday. People of all ages flooded public squares and waved flags of the two warring sides. Youth danced in the bazaars to the sound of drums. The war seemed to be ending.

All of that joy vanished this year. I went back to the same places in the Taliban strongholds of Wardak, Ghazni, and Paktika provinces during the Eid al-Fitr holiday and observed a stark contrast. People struggled to recall their feelings of a year ago. The ceasefire was a distant memory. Nobody seemed to care about the peace talks that have occurred between the Taliban and the U.S. over the last year. Their more immediate concern was the dramatic worsening of violence, and their personal stories of trauma caused by a stepped-up campaign of airstrikes and night raids by U.S. and Afghan government forces.

American military officials have told Crisis Group they are escalating the pressure on Taliban strongholds in hopes of encouraging the insurgents to soften their approach to peace talks. The strategy includes heavy reliance on air power. The nine months that followed the 2018 ceasefire brought a record-breaking 5,914 airstrikes to Afghanistan, more than a 50 per cent increase from the same period a year earlier.[fn]The period from July 2018 to March 2019, the latest month for which data is available, included 5,914 weapons released by U.S. manned and remotely piloted aircraft. The same nine-month period a year earlier included 3,913 weapons releases. These numbers do not include strikes by the Afghan Air Force, which have also escalated in 2019. “2013-2019 Airpower Statistics”, Combined Forces Air Component Commander, 31 March 2019.Hide Footnote  The bulk of these airstrikes hit rural areas from where there is generally little public reporting about daily life and the impact of the conflict on it. How those living in areas affected by the stepped-up air campaign perceive the increased military activity and its impact on their attitudes is little discussed compared to the experiences of violence in urban areas.

The rain of bombs shattered the relative peace that had existed for years in some Taliban-held territories. The insurgents have ruled parts of the countryside as their exclusive fiefdom, creating a sense of security and stability for the local populations. This year, government forces are chasing Taliban fighters deep into these villages in hunting operations often supported by U.S. aircraft. The operations brought the war back to the homes of the Taliban constituency, and some villagers blame the Taliban for sheltering among civilians. More often, though, I heard stories that reflect a deep resentment of the Americans and their local allies.

A tribal elder sees the situation this way:

I lost count of how many people that I have known lost their lives in airstrikes or got detained during night raids since this spring. There were Taliban among them. But not all of them were Taliban. Even not half of them were Taliban. Foreign and government forces are fighting indiscriminately. Do they want to punish us, the civilians, because the Taliban have chosen to live here? What is our crime, stuck between two sides?

A 45-year-old mother of eight children said her youngest daughter was stunned by the loud explosions and seemed to be constantly in a state of shock. She described the panic caused by airstrikes:

Bombs have been raining like hell during the entire month of Ramadan. One day, I and my kids had to rush to the cows’ stable in the evening and eat our breakfast there in order to shelter from bombs. Taliban were moving around our house and planes in the skies were chasing them. We thought we would be deafened by the constant sounds of fire and explosions. We survived that day. We are very lucky to have lived till now.

These men and women have grown afraid of the sky, fearful after the frequent appearance of strike aircraft; on the ground, they worry about the Taliban’s arrival. Insurgents sometimes shelter behind civilians. In Ghazni province I heard complaints from villagers about the insurgents retreating to people’s homes when chased. Residents begged them to leave, but the fighters replied: “Your lives are not worth more than ours. Do you think that blood runs through your veins, and water through ours?”

Patterns of violence are changing. In the past, the insurgents inflicted the majority of civilian casualties. That started to change this year. The latest wave of fighting includes a greater number of civilians killed by international forces and their Afghan allies.

The UN Assistance Mission in Afghanistan (UNAMA) reported in May that more civilians were killed by pro-government forces than by insurgents in the first quarter of 2019. This marks the first time since UNAMA started recording the casualties a decade ago that pro-government forces killed more civilians than did insurgents. Some analysts noted that the trend started more than two years ago, as the Taliban began taking greater care with their operations, though quite inconsistently, in an attempt to improve their political legitimacy. Taliban continue to cause civilian casualties; indeed, they detonated a car bomb near a government building in Kabul as recently as 1 July. But such high-profile attacks have become less frequent as the insurgents have shifted toward targeted assassinations – often using small magnetic bombs – that kill fewer civilians.

If a breakthrough occurs at the peace table, it would happen despite increased military pressure.

The new wave of violence follows a longstanding pattern of the war’s intensification over the last dozen years, with both sides missing opportunities for de-escalation. The numbers of killed, injured and displaced have risen steadily since 2001. In 2014, some observers hoped that violence would subside after the foreign forces withdrew more than 100,000 troops and handed over lead responsibility for security to Afghan forces. The idea was that the Taliban would lose their raison d'être and find it hard to justify continued war as the international forces pulled back. The Taliban did not lose their momentum, however, citing the aim of removing of all foreign troops as a continued justification for the war. The insurgents stepped up their military campaign as the U.S. drew down its forces, threatening major cities and even briefly overrunning some urban zones. In 2018, fighting in Afghanistan killed more people than any other conflict worldwide, and the war will probably remain the world’s deadliest in 2019.

Increased fighting and airstrikes have driven many people to leave their homes. A schoolteacher from Wardak province told Crisis Group:

We often thought we had been through the worst of the fighting, but this year has been really the worst. We were caught in the crossfire all the time. The fighting has been madly intense. Several of my fellow villagers and relatives had to leave their homes and move to the city. We had thought the time of war and displacing people was past. But we see it all over again, the worst of it.

Amid the escalating violence, the U.S. and the Taliban began on 29 June in Doha a seventh round of bilateral talks aimed at concluding an agreement on terms for a U.S. military withdrawal and Taliban commitment to countering transnational terrorism. European diplomats are hoping to facilitate dialogue between the Taliban and other Afghan factions throughout the summer. These moves hold some promise for initiating peace negotiations among Afghans – without which a U.S.-Taliban deal will not end the war. But the violence seems unlikely to pause during any of these talks, which sours the mood of ordinary Afghans about the peace process. The violence may even ratchet up further, as all sides seek negotiating leverage on the battlefield.

I also spoke to Taliban commanders and their political emissaries in recent weeks. They seem unconcerned about whether increased military pressure from their side will spoil the mood of peace. Nor does it appear that the onslaught of airstrikes has softened the Taliban’s views on war and peace. A Taliban commander told me: “They can add as much bombing and military pressure as they can. We will add pressure accordingly. We are not afraid of dying. We do not run out of fighters. Their pressure would only make us harder, and a compromise more difficult.”

If the Taliban are upset about the increased bombing, are the front-line insurgents pushing their leadership to pull out of peace talks? Not yet, it seems. The Taliban’s envoys in Doha share regular updates with senior field commanders, and consult with them on political strategy. Those practices give the fighters some sense of the political game and that diplomacy might be worth trying. As a Taliban commander put it:

We have not been told to adjust our operations due to the talks. We have set our annual military plans in the winter and they go as planned. We decided to step up as the other side did. But there is nothing in the peace talks yet that makes us think about a lull in our fighting. We are going to fight as if there were no talks at all. But we increasingly suspect that the talks are just a game the Americans are using to deceive us and buy time. When we are fully confident about this, I am sure the leadership would decide to pull out [of talks].

There is still some hope among Taliban on the front lines that talks could lead to a breakthrough. However, patience for the process may be running out with the Taliban’s military cadres; it is unclear for how long they would endorse diplomacy if there is no sign of at least the beginnings of a deal. Many conversations make me think the seventh round of talks may well be a turning point for the fledgling peace process.

If a breakthrough occurs at the peace table, it would happen despite — not because of — increased military pressure. For the Taliban, compromising in the face of U.S. airstrikes runs against their ethos of pride, ghayrat, which dictates they must do nothing that could be interpreted as succumbing to the pressure of the enemy. Even if the Taliban feel the pain of heightened military action and are bleeding terribly, ghayrat is not going to allow them to accept offers that make them appear unable to withstand the rising intensity of conflict. That would look like cowardice to the Taliban and their supporters.

Despite the bleak situation in communities experiencing the violence, a lesson from last year’s ceasefire is that the mood can shift rapidly. The guns went silent overnight, and it could happen again. A university lecturer in Ghazni province says he personally remains hopeful: “Last year’s ceasefire serves as a trailer for a long-awaited movie of peace”, he said. “This is how things could beautifully unfold when the sides opt for peace. All the rancour and ill-feeling of decades could vanish overnight, with joy and celebrations of peace, when the two sides reconcile”.