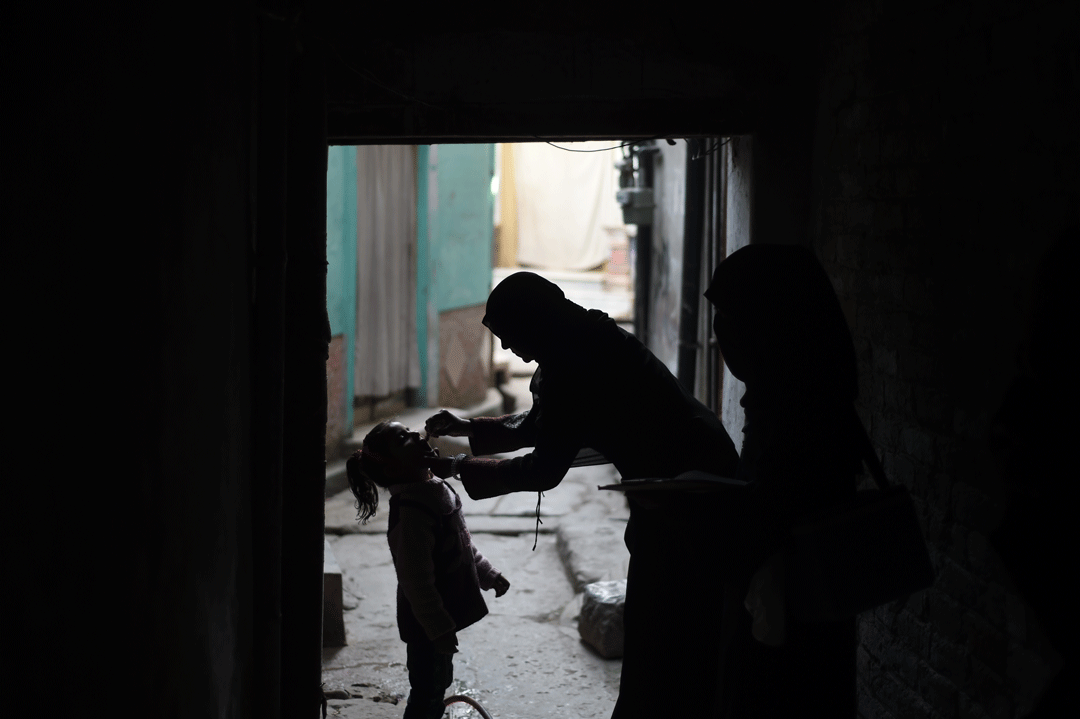 A Pakistani health worker administers the polio vaccine to a child during a vaccination campaign in Rawalpindi on 9 December 2014. AFP/Farooq Naeem
Report 273 / Asia 23 October 2015

Winning the War on Polio in Pakistan

Pakistan remains the greatest impediment to a polio-free world. The link between the disease and Islamist anti-immunisation campaigns is clear but without an appropriate political response. The authorities must tackle extremist networks, step up health services, and make sure that health workers are safe.

As the world marks Polio Day on 24 October, Pakistan remains the greatest impediment to a polio-free world. It has more cases than any other country, reflecting dual policy failures: to prioritise citizens’ health and to curb violent extremism. Despite signs of impressive improvement, with cases declining fast, there is a real risk of another spike unless steps are taken to fully reverse years of neglect to public health services. The prevalence of the disease and conflict is closely interlinked. With militant opposition to immunisation and attacks on polio workers undermining eradication efforts in the volatile FATA (Federally Administered Tribal Areas) agencies, a coercive, military-led strategy should be replaced by a civilian-led approach that encourages community buy-in, respects rights and meets the needs of a marginalised population. Protecting and supporting polio workers and more closely involving communities in eradication efforts should be top priorities. The government should also remove misgivings about the vaccine, created by the anti-immunisation propaganda of Islamist parties and militant sympathisers.

With violent extremists attacking polio workers, particularly targeting women, in FATA, parts of Khyber Pakhtunkhwa (KPK) and Balochistan provinces and Karachi, hundreds of children contracted the disease in 2014. Despite the relative decline in extremist violence, attacks continue, underscoring the importance of protecting the polio workers. Many parents have refused to immunise their children, either fearing militant reprisal or misled by Islamist parties and some mullahs into believing that the vaccine is an un-Islamic Western plot to harm the children.

Having already spanned the porous border with Afghanistan, the only other country where it is endemic, polio could again become a global health risk if its spread is not halted in Pakistan.

While the decline in cases, from 328 in 2014 to 38 as of October 2015, can be partly attributed to increased vaccination coverage of populations fleeing military operations in FATA’s North Waziristan, South Waziristan and Khyber agencies, these gains could prove fragile. Militant networks have yet to be dismantled, and, as demonstrated by the September attack on an airbase in Peshawar, their capacity to regroup, reorganise and resume strikes against the state and citizens remains intact.

The government has taken some steps after the 2014 wake-up call, when polio cases increased dramatically, stoking international concern about the disease’s possible spread beyond Pakistan. By the end of the year, the government and its partners in the Global Polio Eradication Initiative (GPEI) – a public/private initiative launched in 1988 by national governments and spearheaded by the World Health Organisation (WHO) to eradicate polio – had initiated measures to overhaul the eradication program, including through more comprehensive security assessments, better planning and improved coordination and communication between all actors.

Innovative methods, such as reducing reliance on police protection, instead using communities to protect vaccinators and employing vaccinators from within those communities, are being tried on a limited scale but with considerable success in some cities, including Pashtun-majority areas in Karachi that host scores of FATA internally displaced persons (IDPs) and some FATA agencies. However, efforts to convince many mullahs and Islamist leaders to stop misleading communities by depicting the vaccine as un-Islamic and a health risk have had mixed results at best; many parents still refuse to allow their children to be vaccinated

It is essential to maintain momentum. The key test will come in May 2016, when, at the end of the current low-transmission, relatively cool season, the temperature begins to rise and with it the risk of the virus spreading. It will be possible then to judge whether vaccination teams are reaching every child under five. If Pakistan is to make a durable transition out of its current polio-endemic status, it should complement eradication successes with wider routine immunisation coverage, through the Expanded Program on Immunisation (EPI), and significantly improved basic health care and sanitation. In the conflict zones, such as FATA, this requires better governance and security. Success countrywide will also depend on the government’s willingness to partner with civil society and local and international NGOs to protect children from contracting a disease that has been eradicated in most of the world.