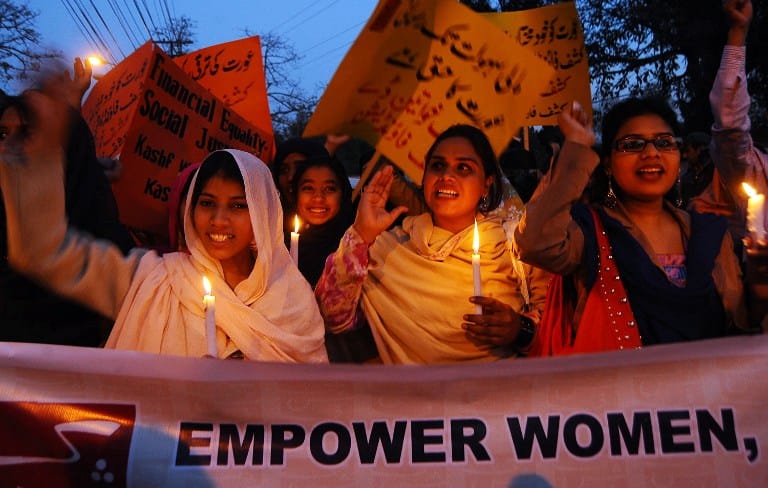 Pakistani human rights activists hold candles as they shout slogans during a rally in Lahore on 7 March 2011 on the eve of International Women's Day. AFP/Arif Ali
Report 265 / Asia 08 April 2015

In Pakistan, women’s security and political, social and economic status are under attack by religious extremists, undermined by discriminatory legislation and unprotected by the state. The government must stand by its pledge to end gender inequity and violence against women, especially in the conflict zones of north-western Pakistan and the tribal belt bordering Afghanistan.

Eight years into its democratic transition, violence against women is still endemic in Pakistan, amid a climate of impunity and state inaction. Discriminatory legislation and a dysfunctional criminal justice system have put women at grave risk. Targeted by violent extremists with an overt agenda of gender repression, women’s security is especially threatened in the conflict zones in Khyber Pakhtunkhwa (KPK) province and the Federally Administered Tribal Areas (FATA). On 8 March, International Women’s Day, Prime Minister Nawaz Sharif vowed that his government would take all necessary legislative and administrative steps to protect and empower women. If this pledge was in earnest, his Pakistan Muslim League-Nawaz (PML-N) government should end institutionalised violence and discrimination against women, including by repealing unjust laws, countering extremist threats, particularly in KPK and FATA, and involving women and their specially relevant perspectives in design of state policies directly affecting their security, including strategies to deal with violent extremist groups.

Women in the past were the principal victims of state policies to appease violent extremists. After democracy’s return, there has been some progress, particularly through progressive legislation, much of it authored by committed women’s rights activists in the federal and provincial legislatures, facilitated by their increased numbers in parliament. Yet, the best of laws will provide little protection so long as social attitudes toward women remain biased, police officers are not held accountable for failing to investigate gender-based crimes, the superior judiciary does not hold the subordinate judiciary accountable for failing to give justice to women survivors of violence, and discriminatory laws remain on the books.

Laws, many remnants of General Zia-ul-Haq’s Islamisation in the 1970s and 1980s, continue to deny women their constitutional right to gender equality and fuel religious intolerance and violence against them. Their access to justice and security will remain elusive so long as legal and administrative barriers to political and economic empowerment remain, particularly the Hudood Ordinances (1979), FATA’s Frontier Crimes Regulations (FCR) (1901) and the Nizam-e-Adl (2009) in KPK’s Provincially Administered Tribal Areas (PATA).

The government has a constitutional obligation and international commitments, including under the UN Convention on the Elimination of All Forms of Discrimination Against Women (CEDAW), to combat gender inequality and remove such barriers to women’s empowerment. Repealing discriminatory legislation and enforcing laws that protect women, including by ensuring that they have access to a gender-responsive police and courts, are essential to ending the impunity that promotes violence against women.

The extent to which rights violations go unpunished is particularly alarming in FATA and KPK, where women are subjected to state-sanctioned discrimination, militant violence, religious extremism and sexual violence. Militants target women’s rights activists, political leaders and development workers without consequences. The prevalence of informal justice mechanisms in many parts of Pakistan, particularly in Pakhtunkhwa and FATA, are also highly discriminatory toward women; and the government’s indiscriminate military operations, which have displaced millions, have further aggravated the challenges they face in the conflict zones.

In KPK and FATA, and indeed countrywide, women’s enhanced meaningful presence in decision-making, including political participation as voters and in public office, will be central to sustainable reform. Pakistan should invest in their empowerment and reflect their priorities in all government policies, including counter-insurgency and peacebuilding efforts. All too often, women comprise a majority of both the intended victims of the insurgency and the unintended victims of the counter-insurgency response.

National and provincial legislation to enhance protections for women is a step in the right direction, but much more is needed to safeguard them against violence and injustice and ultimately to consolidate Pakistan’s democratic transition.