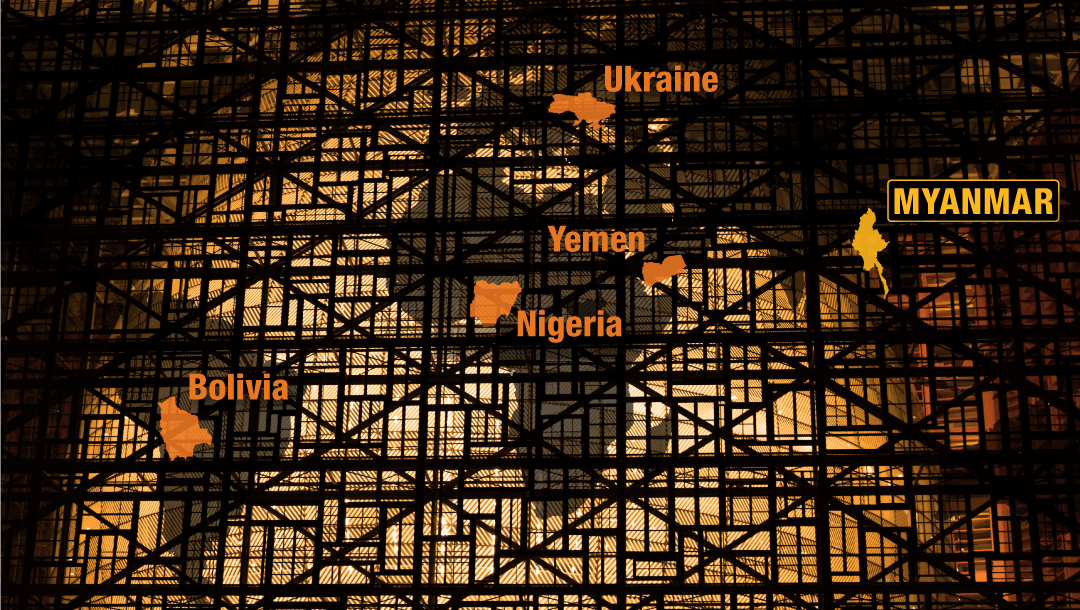 The 1 February coup d’état has pushed Myanmar toward possible state collapse. In this excerpt from the Watch List 2021 – Spring Update, Crisis Group urges the EU and its member states to channel significant aid to Myanmar, support regional diplomacy, expand targeted sanctions on the regime and ensure that the EU arms embargo is strictly enforced.

The 1 February coup d’état in Myanmar has undone a decade of liberalisation, triggered a deep economic crisis, led to renewed ethnic armed conflict and set the country on the path toward possible state collapse. The security forces have responded to widespread popular resistance to the military takeover with brutal violence against demonstrators and the broader civilian population – killing hundreds and detaining thousands with the apparent aim of terrorising people into submission. Instead, resistance movements appear to have become even more determined, continuing to organise general strikes and acts of civil disobedience. Conflict has also resumed or escalated in several of the country’s ethnic areas as armed groups have deserted the peace process and attacked security forces. The economic meltdown prompted by the coup and the near collapse of many government functions, including the health and education systems, will have far-reaching and lasting consequences for Myanmar’s 55 million people. A humanitarian emergency is already in the making, as millions, particularly in cities, are pushed into poverty and face rising food insecurity.

The EU and its member states can help address the crisis in Myanmar by:

After grossly miscalculating how Myanmar’s people would react to the 1 February coup, the regime appears determined to impose its will on the population through sheer brutality. Snipers have shot unarmed protesters, including children, in the head. Police and soldiers have attacked protest barricades with rifle grenades and mortars, targeted medical first responders and fired randomly into crowds, at passing vehicles and even into homes at night. State television has broadcast photos of detainees bearing clear signs of torture, possibly as a warning to others against resisting the coup. Some female detainees have been subjected to sexual and gender-based violence during interrogations. These actions, no doubt intended to terrorise, have not achieved their goals. On the contrary, they have fuelled further resistance by inflaming the already simmering hatred of the military across the country. Although the regime almost entirely shut down the internet, general strikes and civil disobedience continue – with young female activists playing particularly prominent roles – and people keep finding new ways to express their dissent, for example by replacing demonstrations with flash mobs in order to avoid arrest. Close to four months on, the military is struggling to consolidate its power grab.

As a result of the violence, absence of governance, and strikes and civil disobedience, which also affect the private sector, Myanmar’s economy is falling apart.

As a result of the violence, absence of governance, and strikes and civil disobedience, which also affect the private sector, Myanmar’s economy is falling apart. Many have lost their jobs. Income-generating opportunities in the informal sector are drying up and the banking system is at a virtual standstill. Many people have great difficulty taking out cash due to Central Bank-mandated withdrawal limits, while the regime’s internet shutdown has prevented most from access to electronic banking and payment services. The combination of the banking crisis with a collapse in business and consumer confidence, widespread insecurity, and broken logistics and supply chains has resulted in a hard stop to economic activity, and the UN Development Programme now estimates that nearly half of Myanmar’s population risks falling into poverty by 2022.

At this rate, the poverty crisis will soon become a hunger crisis. Food markets are dysfunctional, with some staples unavailable, and surging prices for others. That many people are without income or access to cash leaves them unable to buy what food there is. On 22 April, the World Food Programme warned that up to 3.4 million additional people in Myanmar would struggle to afford food in the next three to six months, particularly in urban areas.

Likewise, the public health and education systems have all but collapsed, as the vast majority of medical staff and teachers – most of them women – refuse to work for the regime. Schools, already closed for months due to COVID-19, have seen their planned reopening stall due to striking teachers and parents afraid for their children’s safety. Many public hospitals and clinics are shuttered, and soldiers have converted others, in key city locations, into forward operating bases after evicting the patients. COVID-19 testing and treatment have virtually stopped and the vaccination program is far behind schedule. With regular childhood vaccinations in jeopardy and key imported pharmaceuticals in short supply, public health experts are worried that a decade of progress in improving basic health care and tackling infectious diseases such as HIV/AIDS, tuberculosis and malaria will now be lost.

Meanwhile, armed conflict is increasing in several of the country’s ethnic areas. While full-scale conflict between the Myanmar military and ethnic armed groups has not yet erupted, clashes have escalated significantly since the coup. In some regions, such as Kachin and Kayin States, the situation is edging toward a resumption of all-out conflict, with the regime even resorting to airstrikes – including upon civilian targets. Several armed groups have put an end to existing ceasefires – some under pressure from their own constituencies to oppose the coup. While some may choose not to, it is now clear that the formal peace process for a negotiated political solution to Myanmar’s numerous ethnic conflicts is dead. Any hope of resolving the Rohingya crisis in the foreseeable future has also evaporated.

Any hope of resolving the Rohingya crisis in the foreseeable future has also evaporated.

Another significant development is the formation of civil defence forces or militias by local communities, including in Sagaing and Magway Regions and Chin State. Armed with locally made hunting rifles as well as a small number of assault weapons and grenades, these groups are not capable of confronting experienced and well-armed army units, but they are able to use local knowledge of the terrain to harass and ambush soldiers, including in urban environments. Underground resistance groups are also carrying out improvised explosive device and arson attacks on regime targets and government administrative offices in Yangon, Mandalay and elsewhere, while hundreds of protesters have travelled from cities to non-government-controlled areas to receive military training from ethnic armed groups.

Growing conflict and insecurity in many parts of the country, coupled with a deepening economic and humanitarian crisis, may lead to significant population flows both internally and across the country’s borders.

Responding to the Crisis

With no sign of either an end to violence or a return to civilian rule, the EU and member states should take a number of steps to respond to the coup and its aftermath.

The first is to make urgent preparations to provide significant levels of support to ordinary people in order to address not only the looming humanitarian emergency but also longer-term needs related to the collapse of the health and education systems and the loss of livelihoods. The EU has already provided an extra €9 million for urgent humanitarian relief, but suspended its development assistance in March as a result of the coup. In order to deliver aid at scale while bypassing traditional mechanisms now under the junta’s control, the EU and member states should explore working through NGO and civil society channels (while protecting them from being overwhelmed or put at risk), multi-donor funds and UN agencies if possible, and local government systems as appropriate. To ensure efficient delivery of such aid, the EU should advocate for the nomination of a senior UN envoy for relief and recovery planning, who could be appointed by the Secretary-General to bring coherence and coordination to UN agencies’, donors’ and implementing partners’ responses to the crisis. With Myanmar’s media under immense pressure, Brussels should also urgently fund independent media outlets, who play a vital role in getting reliable information to the population and the outside world.

Secondly, the EU should support global and regional diplomatic efforts to address the crisis. While the ongoing ASEAN-led process has significant limitations, it is the only diplomatic initiative under way and arguably the only platform for engaging both the regime and representatives of the elected civilian government. The EU should support it with the objective of making it more robust and effective, including by pushing for the speedy nomination of an ASEAN special envoy to help address the crisis and by pressing the junta to permit the envoy to travel to Myanmar as soon as possible. The EU should also back the convening of a contact group on Myanmar comprising key regional and Western countries, an idea that has been quietly discussed and that could usefully complement the ASEAN process. Finally, the Union and its member states should continue to engage closely with the Committee Representing the Pyidaungsu Hluttaw (a group of parliamentarians elected in November 2020) and the National Unity Government that it has appointed, as well as other representatives of Myanmar’s people, such as ethnic leaders (including Rohingya).

Thirdly, the EU should continue to develop its framework of restrictive measures. It should continue to expand targeted sanctions on the military and its business interests, members of the regime, its cabinet, senior police and military officers, and military-owned or -linked companies. It should, however, refrain from revoking Myanmar’s access to the Everything But Arms trade scheme that gives developing country products tariff-free access to the single market, as the impact would fall on workers – mainly young women from poor families employed in the garment industry – and there are no indications that such a move would create leverage over the regime.

Finally, the EU should strictly enforce its arms embargo and make sure that it sufficiently covers dual-use items and technological tools of surveillance and repression. The EU and its member states should work to develop with other partner countries a coordinated list of prohibited items and share information on their efforts to block transfers of such items. This step would create a framework for like-minded countries to coordinate constraints on the military.