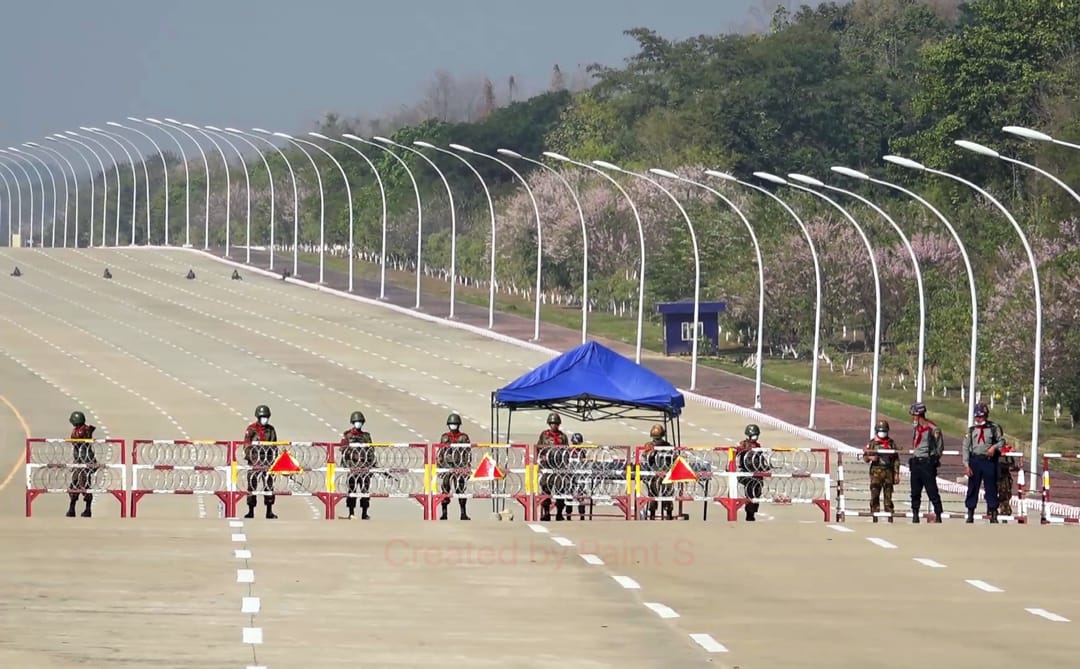 Soldiers stand guard on a blockaded road to Myanmar's parliament in Naypyidaw on February 1, 2021, after the military detained the country's de facto leader Aung San Suu Kyi and the country's president in a coup. AFP / stringer
Statement / Asia 01 February 2021

Myanmar’s Military Should Reverse Its Coup

On 1 February, Myanmar’s armed forces overthrew the country’s civilian leaders. International actors should make clear in word and deed that there will be no business as usual until the elected government is restored. If protests break out, the military should act with maximum restraint.

In a major blow to Myanmar’s fragile democratic transition, the army staged a coup d’état on 1 February 2021. It arrested senior political figures of the ruling National League for Democracy (NLD) – including the country’s de facto civilian leader, Aung San Suu Kyi – and seized executive, legislative and judicial power for at least a year under a state of emergency. The Myanmar military, or Tatmadaw, justified overthrowing the elected government by citing alleged fraud in the 8 November 2020 election that saw the NLD win an overwhelming victory over the military-backed Union Solidarity and Development Party (USDP). The country’s election commission had firmly rejected those allegations last week, as international observers had previously done. The dramatic turn of events constitutes an immense setback for democracy in Myanmar, less than a decade after the country began to steer a course away from half a century of military rule. This reversal will almost certainly worsen the country’s already bleak humanitarian and economic outlook. Although the situation is calm at present, people may well take to the streets in the days ahead, raising the danger of violent crackdowns against protesters. The Myanmar military must act peacefully and with maximum restraint. The swift restoration of democratically elected, civilian authority is in the country’s interest and that of all its international partners.

This dramatic turn of events constitutes an immense setback for democracy in Myanmar, less than a decade after the country began to steer a course away from half a century of military rule.

Hours before Myanmar’s newly elected parliament was to convene on the morning of 1 February, soldiers detained State Counsellor Aung San Suu Kyi, President U Win Myint, cabinet ministers, NLD central executive committee members, the chief ministers of Myanmar’s states and regions, and members of other political parties and civil society representatives. As soldiers conducted these targeted raids, the military also cut off internet and mobile telephone networks in the country’s political capital Naypyitaw and its economic capital Yangon, and took the state television channel off the air. In a statement read out on a military-owned channel, the army said it had detained the NLD leaders and officials on account of “election fraud” and was invoking the state of emergency provisions in the 2008 constitution, thereby transferring all executive, legislative and judicial powers to Commander-in-Chief Min Aung Hlaing for a period of one year. Because the constitution requires the president to invoke a state of emergency, the Tatmadaw designated Vice President U Myint Swe – a military-appointed ex-general – as interim president to order the transfer of power, thereby providing a veneer of purported constitutionality. In a later statement, the commander-in-chief’s office indicated that the military would appoint a new election commission, hold new elections and ultimately transfer power to the winning party.

Tensions between the military and the government had been growing since the NLD’s landslide win in the 8 November general elections, in which the NLD secured an even stronger majority than in the historic 2015 polls, which were the country’s first open elections in decades. November’s contest saw the NLD win 83 per cent of parliament’s elected seats largely the result of Aung San Suu Kyi’s enormous popularity and a firm popular rejection of the military’s political role. The scale of the victory was a humiliation for the USDP, which was left with just 33 of parliament’s 476 elected seats. Ever since, the USDP has campaigned to discredit the vote, alleging that it was marred by irregularities. The army supported these accusations, with Commander-in-Chief Min Aung Hlaing throwing his personal weight behind them. The military claims to have identified more than ten million voter list errors, which it has incorrectly suggested implies fraud on a corresponding scale. International observers have asserted that the vote represented the will of the people.

The coup, unless quickly reversed, will constitute a dramatic setback for Myanmar’s democratic progress. The country’s 2015 elections brought the NLD to power under a de facto power-sharing arrangement with the Tatmadaw, with the 2008 constitution reserving a quarter of parliamentary seats and three key ministries for the military. The cohabitation has since been uneasy but relatively stable, though the relationship between the country’s top two figures – Aung San Suu Kyi and Min Aung Hlaing – is known to be toxic. Due to retire in mid-2021, the commander-in-chief was open about his political ambitions, raising questions about what his post-retirement role could be during an NLD second term.

The military’s seizure of power will not only upend Myanmar’s difficult democratic transition but also could lead to deadly violence.

If it stands, the military’s seizure of power will not only upend Myanmar’s slow and difficult democratic transition but also could lead to deadly violence. Although the situation appears calm for the moment, these events will inevitably provoke popular dissent. Aung San Suu Kyi’s reputation has greatly suffered abroad as a result of her handling of the Rohingya crisis, but she and her party remain immensely popular within Myanmar, and the increased freedom people have enjoyed since the end of military rule means that many will likely be more assertive in demanding their rights than they would have been ten years ago. Mass protests are a real possibility, as are military crackdowns on demonstrations.

The risk of violence – and political and economic uncertainty created by the coup – can only work to the country’s detriment. The best next steps would be in a reverse direction. Although Myanmar’s newly self-appointed leadership appear little inclined to do so, they should release government leaders and others who have been detained, restore civilian rule by elected authorities, and respect the political freedoms, including freedom of expression, of all Myanmar’s people. Should protesters take to the streets, the Myanmar military should act peacefully and with maximum restraint.

It is critical that international actors make clear that they will stand in solidarity with Myanmar’s people.

For their part, international actors should respond firmly and, to the extent possible, in a coordinated fashion, making clear that until power is returned to those whom the electorate legitimately and overwhelmingly chose to hold it, there can be no business as usual. Even those governments in East and South East Asia that, because of their own systems, are not inclined to be concerned about the status of democracy in Myanmar should appreciate that political turmoil and the associated risk of violence in Myanmar will compromise their ability to build mutually beneficial economic and security relationships. They should therefore urge calm. Governments that do not already have arms embargoes in place should impose them now to send a firm, immediate signal to Myanmar’s military that the 1 February coup is unacceptable. At this juncture, it is critical that international actors, particularly those who have influence through economic and security ties, make clear both rhetorically and practically that they will stand in solidarity with Myanmar’s people against an illegitimate action that can only worsen the country’s economic and humanitarian plight and raise the risk of destabilising violence.