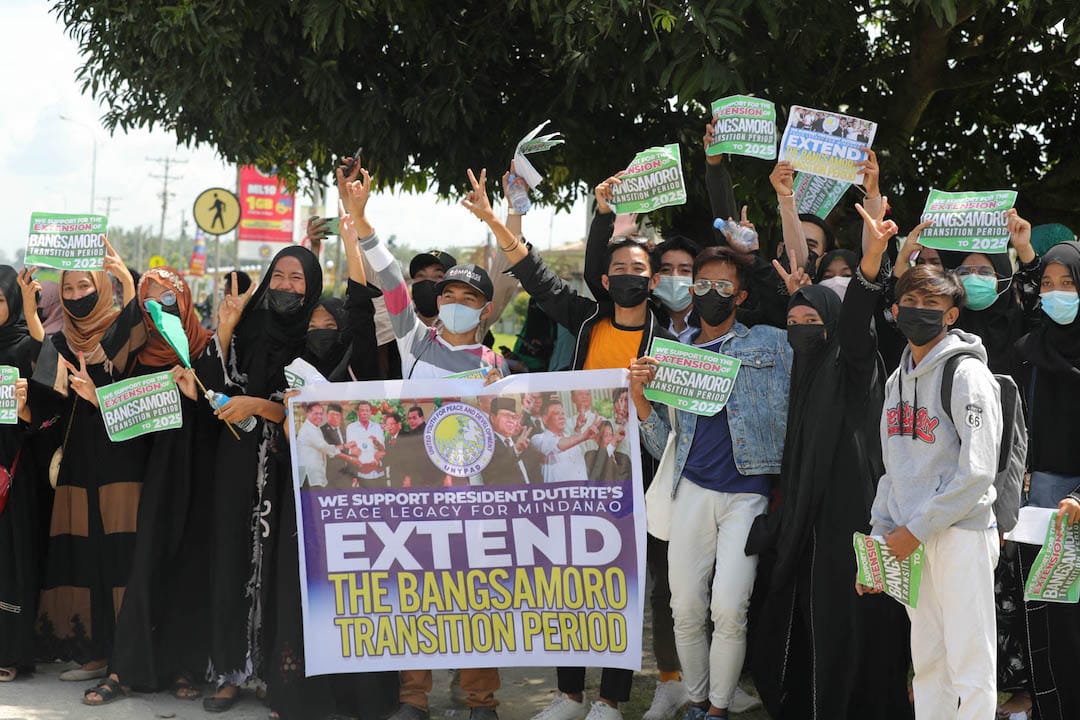 People of Bangsamoro Autonomous Region stage a peace convoy event to support the campaign to extend the term of the transition government in the region to 2025, Philippines on 21 March 2021. Benyamen Cabuntalan/Anadolu Agency via AFP
Q&A / Asia 29 October 2021

The Philippines: Three More Years for the Bangsamoro Transition

President Rodrigo Duterte has signed a bill doubling the length of the political transition in the new autonomous entity in the southern Philippines. In this Q&A, Crisis Group expert Georgi Engelbrecht explains why the extension is welcome news.

What happened and why is it important?

On 28 October, Philippine President Rodrigo Duterte signed into law a bill postponing the first parliamentary elections in the Bangsamoro Autonomous Region in Muslim Mindanao (BARMM) from 2022 to 2025, thereby extending the political transition in the region for another three years.

The law amends Philippine Republic Act No. 11054, better known as the Bangsamoro Organic Law, that had formally created the new autonomous entity in the southern Philippines in early 2019, providing for a three-year interim period before holding the BARMM’s first parliamentary elections that would formally mark the end of the transition. Postponing the vote is tantamount to extending the term of the region’s caretaker government, the Bangsamoro Transition Authority (BTA, which combines both executive and legislative functions), until 2025, as the Organic Law stipulates that parliamentary polls in the region must be synchronised with national elections that take place every three years. The bill underwent intense deliberation and scrutiny in both the House of Representatives and the Senate, the two chambers of the Philippine Congress, before lawmakers passed it and submitted it to the president.

What is the rationale for extending the transition period?

The MILF’s campaign for an extension ... gained traction among national policymakers.

The decision is largely linked to the impact COVID-19 has had on the regional government’s capacity to implement the roadmap leading up to the elections. MILF leaders started advocating for a longer transition period toward the end of 2020, after a local peace advocacy group, the Mindanao Peoples Caucus, recommended postponing the elections in a “mid-term assessment” of the political transition. The non-governmental organisation cited the BTA’s inevitable birthing pains as one reason to give it more time, but also drew public attention to the challenges the pandemic had created. Indeed, the former rebels running the interim government had to put aside their institution-building in order to spearhead relief operations in the region while dealing with periodic lockdowns and steering a less operational Bangsamoro Parliament. The MILF’s campaign for an extension eventually gained traction among national policymakers.

Another part of the rationale for extending the transition was the absence of an electoral framework to guide parliamentary polls in the new autonomous region. The responsibility for designing and passing an “electoral code” to put in place the “parliamentary style of government” that the 2014 peace deal foresaw for the Bangsamoro lies with the interim government. At present, however, only a draft of the code exists – a major hurdle considering that this document is meant not only to lay out the election procedure, but also to delineate parliamentary constituencies. The delay is at least partly due to the pandemic, as the BTA had to reduce the number of parliamentary sessions to discuss the legislation, and had even fewer opportunities to consult communities and local officials in the region due to travel restrictions. Some observers, however, opine that as the party leading the BTA and tasked with the code’s drafting, the MILF might have had an inherent interest in dragging out the process, since extending the transition period means they now have another three years before facing voters for the first time. While that is difficult to corroborate, the fact remains that electing 80 parliamentarians without clear guidelines would have proven challenging.

Why has the proposal been controversial?

The decision on whether or not to extend the transition has generated intense debate both in Mindanao and in Manila throughout 2021. Some critics argued that the MILF’s bid to postpone elections was driven by self-interest and would undermine democratic development in the Bangsamoro, highlighting that the move would result in another three years without “a popular mandate” since existing BTA members were appointed (by the president), not elected. Lawmakers who voted against the extension bill in Congress picked up this line of reasoning, even suggesting that the region hold a plebiscite on a potential extension.

More generally, the controversy stemmed from the Bangsamoro’s complex ethnic and political landscape. The region is a fragmented entity comprising non-contiguous provinces, a variety of ethno-linguistic groups, and a plethora of clans and guerrilla outfits. Kinship ties and Islam often bind diverse communities. But they also bring about loyalties to different movements, of which the MILF is the largest but hardly the only one. The ex-rebels are influential in central Mindanao among the Maguindanao and Maranao communities, but less so in the island provinces of the Sulu archipelago, a historical bastion of Moro nationalism populated by the Tausug ethnic group. Other areas are dominated by political clans. Finding consensus on any political issue in such a jumbled environment is by definition an arduous task; doing so on one as important as the final stretch of the peace process, even more so. Militant groups still active in the region have also tried to discredit the former rebels by attacking their religious credentials.

The former guerrillas’ campaigning faced opposition from other influential local politicians across the region, however. One of the extension’s fiercest opponents was Abdusakur Tan, governor of Sulu province and a long-time critic of the MILF, who had campaigned against creating the BARMM in the past and strongly opposed resetting the 2022 parliamentary elections. Speaking on behalf of the Tausug ethno-linguistic group, Tan repeatedly criticised the interim government and its track record on the grounds that BARMM was neither inclusive nor “felt” by his people. Another sceptic was Cynthia Guiani-Sayadi, the outspoken mayor of Cotabato City, BARMM’s seat of government, who argued that seeking extension was the MILF’s poor excuse for its weak performance at the government’s helm.

The Philippine government ... has ... been quite supportive of the MILF’s plea for a longer transition period.

The Philippine government, including the security establishment, has on the other hand been quite supportive of the MILF’s plea for a longer transition period. Defence Secretary Delfin Lorenzana, for example, personally endorsed the proposal. President Duterte has been more ambivalent. While he backed the call for an extension at first, he appeared to have second thoughts after influential Moro politicians visited Manila several times in early 2021, articulating their concerns about the BARMM’s “governance issues”. The president’s hesitation was also likely the result of conflicting legal opinions, with his advisers providing contradictory views regarding the need for a plebiscite to postpone elections. It is also plausible that Duterte was hedging his bets in the run-up to the 2022 presidential election: as the president’s party faces an uncertain political future with Duterte barred from running for a second term, ties to local Bangsamoro powerbrokers are vital in securing votes. Whatever the case, Duterte’s spokesperson emphasised that the president would remain “neutral” and leave the decision in the hands of Congress. The president also resisted a last-minute attempt by Moro elites opposing the extension to convince him to veto the bill.

What are the implications for the Bangsamoro peace process?

Three more years should allow the MILF-led interim government to further strengthen institutions, pass key legislations that are still in the pipeline and develop a capable bureaucracy with better-trained civil servants, thereby ensuring the BARMM does not become another “failed experiment” like its predecessor, the Autonomous Region in Muslim Mindanao, which was created in 1989 but proved unable to bring lasting peace and development to the region. Delaying parliamentary elections should also enable a more mature political scene in the new autonomous region. Indeed, all the BARMM’s nascent political parties, including the MILF’s United Bangsamoro Justice Party, will benefit from extra time to boost their capacities and better articulate their political vision.

The extended transition period also gives the central government and the MILF an opportunity to address some of the most urgent challenges in the peace process, including disarming former rebels and ensuring the socio-economic development of war-torn areas in Mindanao. Referred to as “normalisation”, this aspect of the peace process is not directly linked to the political transition, but the vision of the 2014 peace agreement foresaw both tracks running in parallel. The holistic approach has been meandering as of late, however, with many projects falling behind schedule, and the pandemic diverting funds from the central government toward combating COVID-19. Manila and the ex-rebels also need to resolve misunderstandings about the compensation package for former fighters and technical details on the decommissioning process. Recent efforts of the Office of the Presidential Adviser on the Peace Process to secure more funding are a welcome step in this regard, but given the high expectations for a peace dividend among the Bangsamoro population, both Manila and the MILF need to redouble their efforts. More time should be a powerful impulse to invigorate the process. The extension should not result in complacency, however, as slow implementation of both tracks might again nurture disillusionment and breed discontent in the Bangsamoro population.

Finally, a longer transition period could help the autonomous region in decisively asserting itself as a source of stability by curbing ongoing violence in pockets of the Bangsamoro. Communal conflicts over land and clan feuds, known as rido, have plagued the region for decades. Bangsamoro ministries are trying to tackle the challenge, but more time could allow them to develop more systematic approaches in addressing clan violence. Similarly, the interim government needs to confront the challenge of armed groups still operating outside the peace process. Jihadists and other militants that favour a violent solution to the region’s ills are on the retreat, but could quickly tap frustration among civilians and disgruntled MILF fighters alike should the BARMM not live up to expectations.

In the immediate term, perhaps nothing too significant. COVID-19 permitting, the Bangsamoro Parliament will continue its regular sessions while the MILF-led interim administration will carry on with day-to-day governance, focusing on pandemic relief (with infections once again surging) and moving ahead with deliberations on the priority codes.

With the current BTA members ending their term in 2022, a crucial development to watch for is whether Duterte will take the initiative to reappoint members of the Bangsamoro Parliament. Prior versions of the extension bill left the task up to Duterte’s successor. But according to available information, the final text stipulates that the current president “may appoint the eighty new interim members of the BTA who shall serve up to 30 June 2025 or until their successors shall have been elected and qualified”. Whether the Philippines’ first-ever president to hail from Mindanao will use this prerogative remains unclear, but it provides him with an opportunity to influence politics in his home region even beyond his term.

Ballots and Bullets in the Bangsamoro

The Philippines Votes the Marcos Dynasty Back into Power