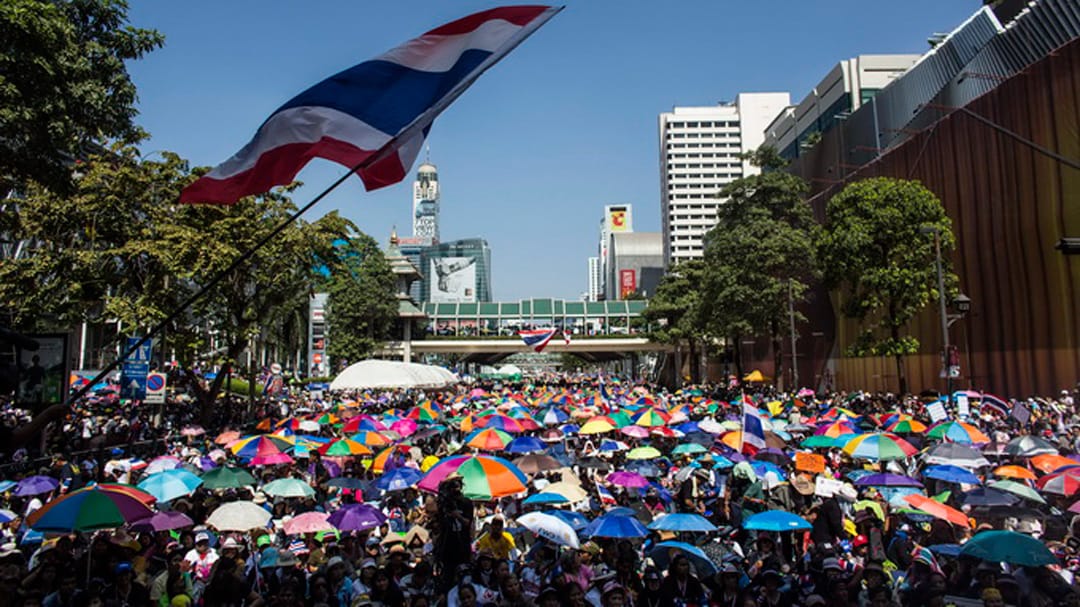 The campaign by anti-government protesters to derail the 2 February election raises prospects of widespread political violence, and scope for peaceful resolution is narrowing. Protests may aim to provoke a military coup, or encourage a judicial coup. If protesters succeed in their bid to delay the poll and replace the elected caretaker government with an appointed council, others who demand to exercise their constitutionally-guaranteed franchise are likely to resist. Competing Thai elites – with mass backing – disagree fundamentally about how political power should be acquired and exercised. The election, and the opposition to it, crystallises the dilemma in reaching a new consensus on Thailand’s political order: will government be legitimised by voters or by traditional institutions such as the monarchy and the military?

Since 2005, political and structural tensions have animated a conflict centred on self-exiled former Prime Minister Thaksin Shinawatra, who won enduring support from majorities in the north and north east newly conscious of their electoral power. Thaksin challenged institutions that draw legitimacy from traditional sources of authority, including the military, judiciary, palace network elements and watchdog bodies collectively known as “independent agencies”. Beginning with a 2006 military coup, and in concert with the Democrat Party, which draws most of its support from the south and Bangkok, these institutions have tried and failed to eliminate Thaksin’s influence.

There is no clear way out. But there are ways to render a bad situation potentially catastrophic. Denying the chance to vote is one. So is the propensity of some leaders to achieve by mass action – often violent – what they cannot by popular mandate or negotiation. As much as elections, Thailand needs leadership to generate the truly inclusive national dialogue required to set it on a stable path.

As anti-government protesters intensify actions, the risk of violence across wide swathes of the country is growing and significant. The People’s Democratic Reform Committee (PDRC) protesters, led by former Democrat Party secretary general Suthep Thaugsuban, are determined to unseat the caretaker government of Thaksin’s sister, Prime Minister Yingluck Shinawatra. They also aim to derail the election they fear will reinstall Thaksin’s Pheu Thai Party. Thaksin-aligned parties have won every poll since 2001, a record that has eroded his enemies’ faith in elections. The PDRC considers Thaksin uniquely corrupt and malevolent. It attributes his electoral success to vote fraud and the susceptibility of poorer, less educated citizens to unethical, unsustainable populist policies.

The PDRC insists that extraordinary measures, including suspension of electoral democracy, are required to “uproot the Thaksin regime”. Citing ambiguous constitutional provisions to justify ousting the elected government, the PDRC proposes to eradicate “Thaksinism” via an unelected People’s Council – 100 “good people” whom it would appoint and 300 others chosen as functional representatives – to govern for up to eighteen months and implement reforms. The reform agenda is only broadly outlined and includes decentralisation, elected governors, stronger anti-corruption laws and police reform.

After Pheu Thai’s 2011 election victory, Yingluck cultivated relations with Thaksin’s opponents in the senior ranks of the military and Privy Council. Small anti-government protests lacked traction until October, when parliament passed an ill-judged blanket amnesty that would have erased Thaksin’s 2008 abuse-of-power conviction. It would also have absolved ex-Prime Minister Abhisit Vejjajiva and his deputy, Suthep, for ordering the 2010 military crackdown on pro-Thaksin Red Shirt protesters in Bangkok that killed more than 90, as well as army officers who implemented the order. The bill galvanised Thaksin’s opponents and sparked sustained protests that attracted growing numbers of middle-class Bangkokians. Faced with overwhelming opposition, including from Red Shirt allies, the government withdrew support.

Even before the Senate rejected the bill on 11 November, protest leaders shifted their goal to ousting the government. Several Democrats, including Suthep, resigned from the party to lead the street protests. After Democrat Party MPs resigned en masse, Yingluck dissolved parliament on 9 December, and the government acquired caretaker status. As demanded by the constitution, the February election was scheduled and endorsed by royal decree. The Democrat Party resolved to boycott the election, as it did in 2006, and support the protests.

The PDRC plans to paralyse Bangkok to eject the government and force cancellation of the election. There is immediate risk of violence designed to instigate a coup. The army chief, General Prayudh Chan-ocha, has not ruled out the possibility. The army has mounted eighteen successful and attempted coups since 1932 and suppressed pro-democracy demonstrations with lethal force in 1973, 1992 and 2010. It has never intervened on behalf of a Thaksin-aligned government.

There are other potential triggers for unrest. If the election is delayed without government consent or results are nullified, many who saw their representatives expelled from office in 2006 and 2008 too, may see no recourse other than violent resistance. The combination of street protests and judicial intervention to unseat elected government is familiar; in 2008, the anti-Thaksin People’s Alliance for Democracy occupied Government House for months and closed Bangkok’s airports before the Constitutional Court dissolved the People’s Power Party, a Pheu Thai predecessor. Many perceive the Constitutional Court as biased, and the “independent agencies” – mandated by the 2006 coup makers’ 2007 constitution – as compromised because their members were appointed by committees dominated by judges and officials not themselves democratically accountable.

The election faces multiple pitfalls. The Democrat Party decision to boycott might provide a pretext to challenge the poll’s legitimacy. The Election Commission appears reluctant to perform its duties and has called for the election to be postponed. Protesters prevented candidates from registering in 28 constituencies in the Democrat Party’s southern stronghold. The Election Commission should take remedial action, but this is uncertain. On 7 January, the National Anti-Corruption Commission pressed misconduct charges against 308 mostly Pheu Thai lawmakers who supported an amendment to create an all-elected senate. Many are candidates and could be disqualified if impeached by the Senate. If less than 95 per cent of the 500 seats are filled on 2 February, by-elections will be required before the new parliament can meet.

The détente of the last few years masked fundamental, unresolved tensions. Today’s crisis has greater scope for serious, protracted violence than earlier episodes not least because there is neither evident middle ground nor protester appetite for compromise.

A deal to postpone the election could buy time for negotiation but would be only a stopgap without a comprehensive, broadly accepted agreement on the future political order. Thailand is deeply polarised, and the prospects for such an agreement are dim. Still, a counsel of despair is not an option. All need to understand that violence will not advance more responsive and transparent government. An election alone will also not resolve basic disagreements about how political power should be acquired and exercised, but the following should be borne in mind as a way out of the impasse is sought:

If the sides can agree on the need to avoid violence and for a national dialogue built on a shared agenda, a solution might just possibly be found. It is a slim reed on which to float hopes, but in Bangkok there is little else available.