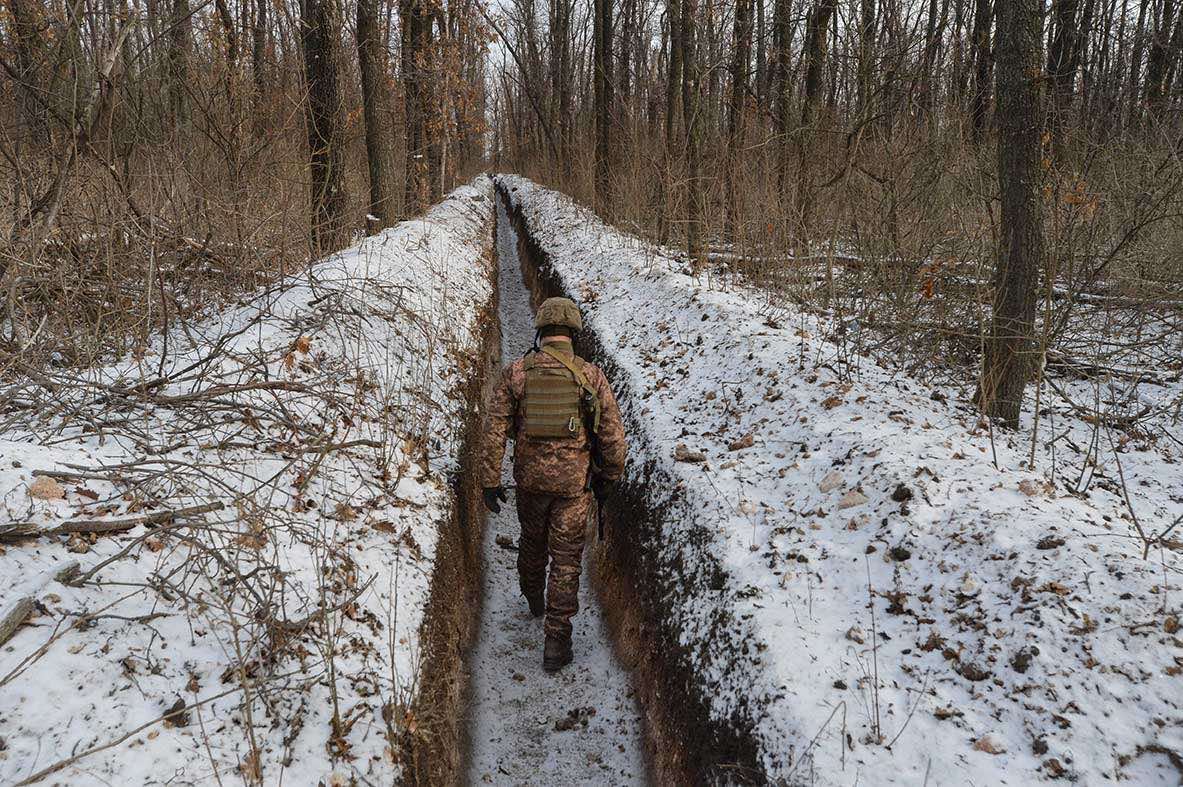 On 24 February 2022, Russia attacked Ukraine on several fronts beginning  a major invasion. Ukraine's president declared martial law, vowing stiff resistance, as Western powers condemned Moscow's actions. Crisis Group will be covering this crisis in depth as it develops [see our Ukraine page]. The visual explainer below focuses not on the full-scale escalation that began on 24 February, but on fighting in the Donbas region of eastern Ukraine that began in 2014. This provides crucial background for understanding what is happening today.

The armed conflict in Eastern Ukraine started in 2014. Between then and early 2022, it had already  killed over 14,000 people. Over the course of eight years, Ukrainian government forces fought  Russian-backed separatists for control over much of the two heavily industrialised regions of Donetsk and Luhansk, also known as Donbas. Fierce battles in 2014-2015 ended with one third of the regions' territory, its most urbanised part, occupied by two Russian proxy statelets, the  self-described Donetsk and Luhansk People’s Republics. Between September 2014 and February 2015, Russia, Ukraine, France and Germany signed several iterations of the so-called Minsk agreements, which eventually stopped the forward movement of troops and reduced fighting significantly. But the agreements were never implemented, and the fighting transformed into a trench war, with roughly 75,000 troops facing off along a 420-km-long front line cutting through densely populated areas. The war ruined the area's economy and heavy industries, forced millions to relocate and turned the conflict zone into one of the world’s most mine-contaminated areas.

This visual explainer shows both the human cost of the war from 2014-early 2022 and the relationships between diplomatic efforts at de-escalation and patterns of fighting and loss of life.

Our two interactive heat maps show military fatalities and civilian casualties (deaths and injuries), broken down by month, and according to the location at which the incident occurred. Maps are centered on the combat zone – the Donetsk and Luhansk regions, divided along community boundaries. Both maps illustrate how the war's impact stretches far beyond military positions.

Fatalities by Community (Combatants and Civilians)

Some months saw heavier fighting, and more deaths and injuries than others. Geographically, casualties tended to be concentrated where the sides were especially close to key infrastructure, to each other, or both. You can hover over the heat map and click on individual communities to get a sense of how casualties fluctuated over time, and where they occurred most often.

Civilian casualty data in this heat map includes those killed and injured by live fire – in artillery or mortar strikes, or by bullet wounds from rifles or heavy machine guns. It also includes victims of landmines or explosive remnants of war, as well as those who died of natural causes queuing at checkpoints to cross into or from Ukrainian government-controlled territory.[fn]

A Breakdown of Casualties by Category and Cause

Combatant Fatalities by Cause

The intensity of the fighting differs from month to month. Our way to measure it is to rely on numbers of explosions as recorded by the Special Monitoring Mission of the Organization for Security and Co-operation in Europe (OSCE SMM) on a daily basis. The SMM was the only international observer mission allowed to collect information from all sides, and its data, while incomplete, remains the best available.

To illustrate the correlation between diplomatic efforts and the dynamics of warfare, we provide the dates of ceasefire recommitments, overlaid on this chart showing the rise and decline of explosions over time. The number of reported explosions often decreased after ceasefires, only to rise again in the absence of a durable settlement.

In 2021-22 two Russian military build-ups along the Ukrainian border foreshadowed an escalation, one in March and April 2021 and a second one in December 2021 through February 2022. Both these phases also saw an increase in reports that the OSCE Missions were denied access to the war zone by  armed formations.  This means that with the invasion drawing closer, the visibility of what was going on in the Donbas conflict zone declined. Eventually, on 24 February 2022, the day of the invasion, the OSCE announced it would evacuate its Mission. On 8 March, all of its international staff had left Ukraine. Local  Mission members will remain in administrative functions in anticipation of the Mission’s revival, but the OSCE has suspended its reporting activities. https://www.osce.org/special-monitoring-mission-to-ukraine/513424

The decision of the Russian government to recognize the independence of the two separatist republics on 21 February 2022 effectively put an end to discussions of Minsk implementation. Three days later, Russia invaded Ukraine, heralding a new phase of the war with a scope of violence far beyond what is depicted here.

Crisis Group sourced this data from open sources in Ukraine and Russia from 2020 onward. Sources for the Visual Explainer included:

We faced a number of limitations in tallying casualties. There was  no unified source for casualties resulting from this conflict. While international organisations provided concrete, triangulated data on civilian casualties and the Ukrainian government issued detailed statements about its reported military losses, statements from de facto officials have been patchy. In many cases, Crisis Group has sought to triangulate data using social media posts or to gather more information through communications with private citizens.

Information about conflict victims is often politicised. It is likely that some non-combat casualties among fighters on both sides have  sometimes been reported as combat casualties, whether by officials or de facto officials, or by media. In cases where there was no information regarding location or cause of death or injury, we did not include the incident in our infographic. When  faced with conflicting accounts regarding whether a soldier’s death or injury occurred in combat, we listed the cause as “other”. Finally, military and de facto officials sometimes did not disclose the location and cause of military deaths. When tallying fatalities among Russian-backed armed groups, Crisis Group only included those for which we could find at least one additional source.

Sources reporting on combat casualties among the armed groups often use the word “обстрел”, a broad term that is usually translated from Russian as “shelling”, but which can in fact refer to artillery, small arms and light weapons fire. It is therefore possible we have overestimated the number of armed group fatalities caused by shelling. Furthermore, use of the term “обстрел” may in some cases indicate other causes of death, such as friendly fire or incidents related to unsafe handling of weapons.

Crisis Group drew on the OSCE SMM daily reports for its data on the number of explosions. While the SMM also collected data on small arms fire, we have chosen not to  include this in our graphs. Our focus has been on documenting major spikes in fighting that involved the use of larger caliber weapons. Explosions recorded by the OSCE have  also been the most reliable indicator of combat dynamics available from open sources, with the added advantage that both sides used the same indicators, counting the number of shells (mortars and artillery) fired by the other side.

Civilian casualties: civilians who have been killed and injured in the conflict zone in circumstances directly resulting from the war. This includes those killed and injured by live fire, as well as those whose deaths or injuries resulted from mines or explosive remnants of war, regardless of whether they occurred near the contact line or not. It also includes those who died of health-related causes while queuing to cross the contact line. Conditions at crossing points were  often suboptimal, and civilians waiting to cross may have lacked adequate shelter, rest facilities and medical services. Our main sources for civilian casualty data are the UN Human Rights Monitoring Mission, the OSCE SMM and local media.

Military fatalities: combat fatalities, on either warring side. Our data includes only those killed by live fire, mines and explosive devices. Crisis Group has excluded data on those wounded in action due to the complex and incomplete nature of the data.

Shelling: an incident generally involving artillery or mortar fire. Crisis Group attributed casualties to this category when victims were reported to have suffered shrapnel injuries, or when other information about the circumstances of the death or injury suggested it resulted from shelling.

Small arms: a category that includes weapons ranging from rifles to heavy machine guns. Casualties were placed in this category if sources indicated that the person suffered a gunshot injury.

Drone attack: an incident typically involving an improvised combat drone, constructed by attaching ammunition or a grenade to a commercial unmanned aerial vehicle.