Sarajevo saw its biggest demonstration in years on the evening of Thursday, 6 June, and into the Friday morning  as thousands of citizens surrounded the Bosnian capital’s parliament building and refused to allow those trapped inside to leave. They were angered by the government’s failure to amend the laws needed to keep issuing ID numbers after the Constitutional Court struck down an ID law. In a legal limbo, newborns have been deprived of numbers, passports and other services. Police finally evacuated the building at 4 am today.

What is this all about? The Constitutional Court rejected the law on citizens’ identification numbers in May 2011 because it used names of municipalities in Republika Srpska (RS), the smaller of Bosnia’s two entities (the other being the Federation of Bosnia and Herzegovina, or FBiH). The municipality names had been changed, in response to another court case, so the Constitutional Court maintained that a law based on inaccurate place names could not be upheld. In January 2013, when parliament missed deadlines to amend the law, the court erased it, leaving no legal basis on which to issue new numbers. The Council of Ministers submitted a draft law featuring registration areas aligned with the entity boundaries, as RS leaders preferred. However, delegates from FBiH, the larger entity, wanted to keep the old registration areas, which crossed entity lines, and to change only the now-outdated municipal names. On this dispute, all attempts to amend the law foundered. Children born in recent months are unregistered and unable to get passports and access other services. One such child, Belmina Ibrišević, needed surgery available only abroad; her plight galvanised public opinion.

When I visited the parliament on Thursday I must have looked suspiciously parliamentary, because the crowd jeered me at first before I waded in for a chat. Coming back later that day, I saw the crowd had grown and got rowdier. I saw youths converge on an older man who tried to break through. He was knocked down before police could protect him. Elsewhere, however, children played as their parents watched, and the overall atmosphere was calm. 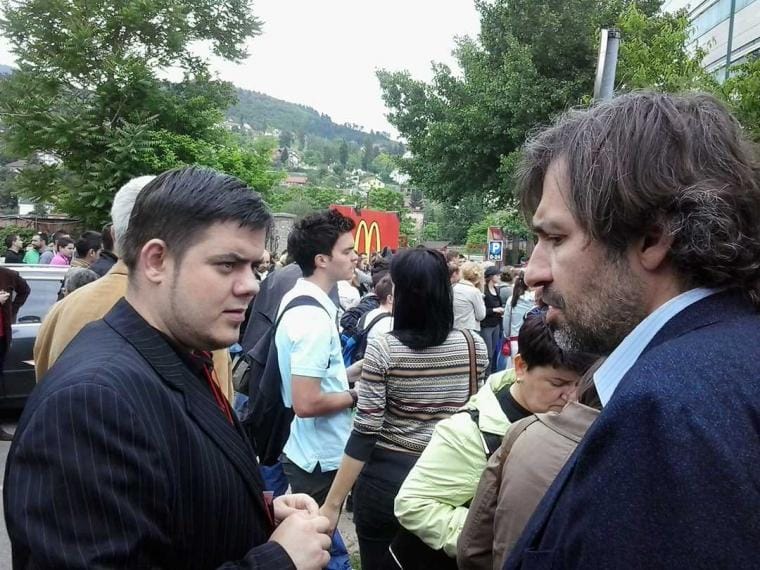 Though the demonstration is about the government’s egregious failure to provide the basic service of an ID number to its citizens, it has catalyzed other accumulated grievances. I spoke to a young imam (pictured, above) who had worked in both entities. In Zvornik (RS) his mosque had been vandalised and the Bosniak (Muslim) population complained of being shut out of virtually all state jobs; yet in the Bosniak-majority FBiH, he was fired after he refused the local mayor permission to give an election speech in the mosque.

There are countless such stories in Bosnia, with most people feeling very much left outside the charmed circle of prosperous officials.

Inside the parliament building, which also houses the prime minister and much of the government, over a thousand delegates and their support staff huddled with about 250 foreign bankers assembled to discuss investment opportunities in Bosnia. The prime minister managed to get out through a window with his bodyguards, and a few others were evacuated for medical reasons, but almost everyone else was stuck until early this morning.

Bosnia’s widely respected Central Bank governor Kemal Kozarić appealed for the release of at least the visiting bankers, who plainly bore no blame for government failures: “I will resign in writing if only you will let these people go…. I think I am responsible too, I picked this [location]. I thought the state had to show it was ready to welcome investors. I made a mistake.”

The local police were out in force and looked capable and well-equipped. It’s a mystery why it took so long to give the order to create a cordon and let those trapped inside out. One possibility: Bosnia has so many overlapping jurisdictions that it’s hard to work out who is responsible (cantonal, entity or state level officials?) and when there’s a high possibility of televised mayhem, no one wants to make a decision. (When a gunman opened fire on the U.S. embassy in October 2011, it also took hours for a police sniper to get the order to shoot him in the leg, though he was all alone and in plain view.) BiH security minister Fahrudin Radončić, whose office is in the blockaded building, told Bosnian state television that “we have suffered serious harm as a state. From today on we will have serious political consequences because Serbs and Croats won’t consider Sarajevo a safe city”.

Serb leaders seized the opportunity, claiming – as far as I could see, without any evidence – that the demonstration was directed against them. Top Serb state and entity level leaders met today and said they affirmed “every public expression of opinion” and praised the police for avoiding injuries, but warned they would have to reconsider how Serbs take part in Sarajevo-based institutions in the near future. They have a point – the crowd clearly supported the FBiH view on the ID law, and demanding legislation under duress is wrong – but using this event to justify a pullout from state institutions or to stoke fears would be a mistake.

The one winner in all of this may be Bosnia’s international overseer, High Representative Valentin Inzko, who appeared on the scene at 2:30 in the morning and brokered the deal allowing police to get the people out. In theory, Inzko has virtually unlimited powers in Bosnia, but in practice has not had the political support to use them for several years. Yet many, especially in Sarajevo, still yearn for him to intervene; a demonstrator told him “you are the top of this state, we trust you…. as a citizen and as a man I appeal to you to do something”.

That, in a nutshell, is Bosnia’s problem: everyone understandably wants its leaders to “do something” that they seem unable or unwilling to do, whether it is as trivial as issuing ID numbers or as consequential as amending its constitution. It almost always comes down to a clash of two or three incompatible conceptions – usually an RS preference to empower the entities and a Sarajevo desire to reinforce the state.

Many Bosnians are enraged at the government, and maybe at anyone who looks sleek and prosperous, with a suit, a car and driver – the marks, in this struggling country, of membership in the governing elite. Rage isn’t too strong a word. Virtually everyone I spoke to supported the demonstrators and thought the officials holed up in the parliament were leeches, thieves or worse. ”We should just burn the whole thing down and start over from scratch”, gesturing at the parliament and government buildings.