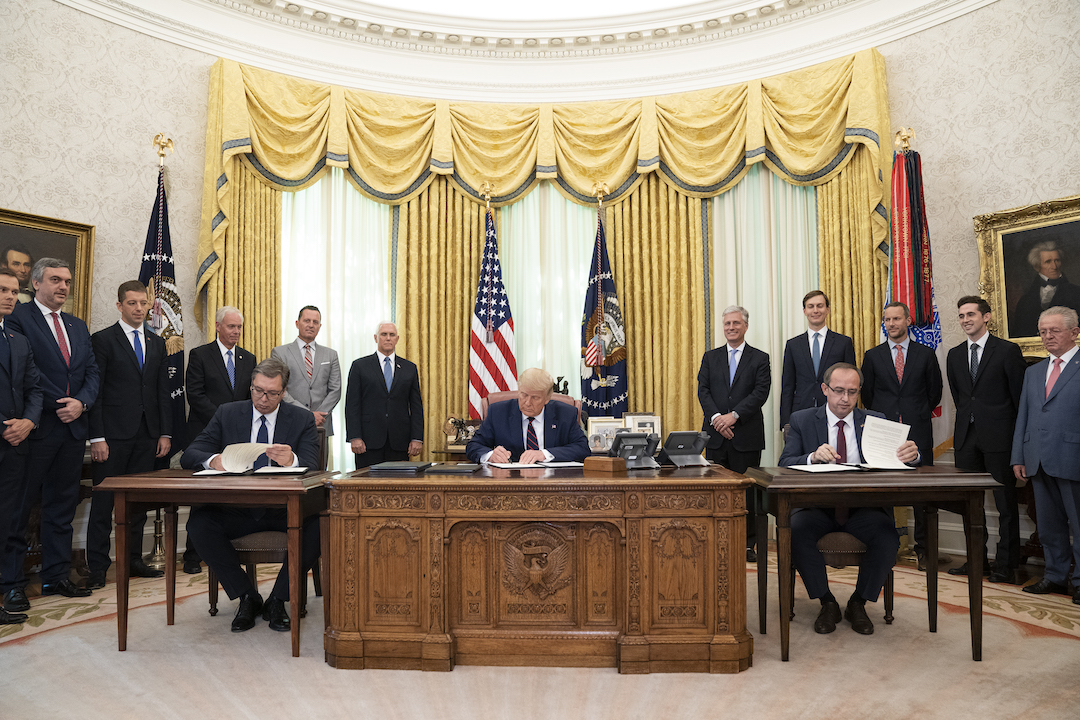 While Kosovo and Serbia have been at peace since 1999, the unresolved dispute over the former’s independence is a potential source of instability in the western Balkans. In this excerpt from our Watch List 2020 – Autumn Update, Crisis Group urges the EU and its member states to determine whether there is possibility to expressly focus on achieving a final agreement based on mutual recognition, help establish communication channels between the parties, and highlight that both Begrade and Pristina should address pervasive misinformation about the dispute, and communicate with their respective peoples in a more concerted way.

This commentary is part of our Watch List 2020 - Autumn Update.

The unresolved dispute between Kosovo and Serbia over the former’s independence is the greatest potential source of instability in the western Balkans and an impediment to the European integration of both. While Belgrade and Pristina have been at peace since 1999, and through EU-led mediation arrived at certain technical solutions that facilitate trade, border management and other shared challenges, the rift between them will persist until both sides arrive at a deal that addresses two key sets of issues. The first concerns Serbia’s non-recognition of Kosovo’s independence and Kosovo’s concomitant refusal to recognise Serbia. The second concerns who will govern Serb-majority communities in Kosovo.

While the dispute between Kosovo and Serbia, already decades old, has no natural expiration date, there are new reasons to hope that the parties might be able to arrive at a shared vision for how to end it. Leaders in Belgrade and Pristina have in recent years begun publicly to explore the contours of a new potential deal. One path to compromise might involve recognition of Kosovo’s sovereignty in exchange for important concessions such as the creation of highly autonomous districts for Serbs in northern Kosovo and Albanians in Preševo, Serbia. Another, albeit more contentious one, would see a redrawing of borders so that the governments swap jurisdiction over those two regions.

But the challenges and obstacles remain significant. Much of the public in both countries, driven by years of irresponsible political messaging, is committed to an uncompromising hard line and Serbia’s constitution requires recognition of Kosovo to be approved in a referendum. On top of that, the mediators are not on the same page. In recent talks, Washington, Brussels and European capitals pursued sharply differing negotiating strategies and agendas, generating confusion and little real progress.

To help put the parties on a path to resolution, the EU and its member states should:

A Long and Costly Impasse

The impasse over Kosovo’s independence is costly to both parties and to regional stability. Following Serbia’s lead, five EU member states, four NATO members and nearly half the world’s nations have denied it recognition (or, in some cases, withdrawn earlier recognition). As a result, Kosovo has been frozen out of the UN, NATO and the EU. The EU has made clear that resolution of the dispute with Kosovo is a necessary (albeit not sufficient) condition for Serbia’s membership.

The inability of either country to improve its international status fuels resentment in both. As long as the impasse persists, both parties may be tempted to expand their influence on the ground where they still can. Belgrade could seek to reassert some of the control it ceded over the four Serb-majority municipalities in northern Kosovo and over the border; in response, Pristina might attempt to forcibly integrate these areas, drive out Serbia’s remaining institutions on its territory, question the status and security of the medieval Serbian Orthodox monuments, or encourage separatism in Serbia’s Albanian-majority Preševo valley. In the long run, whatever measure of stability and security Kosovo’s Serbs and Serbia’s Albanians have is hostage to good relations between their respective capitals.

The main challenge is to find a compromise that rewards Serbia for extending recognition – a step it has put off in part because of the prevalent view among Serbs that Kosovo is an illegitimate breakaway – but is also acceptable to Kosovo. Because Serbia’s constitution requires that sovereign recognition of Kosovo be affirmed by referendum, any deal will have to command majority popular support. Pristina does not face the same kind of constitutional requirement, but its officials also might decide to put the agreement to a vote in order to ensure it legitimacy, likewise constraining their manoeuvring room. The internationally brokered plan that led to Kosovo’s independence in 2008 sought to balance benefits and concessions between both sides. Kosovo got independence, albeit with an initial period of international supervision, but had to decentralise its administration and give its Serb-majority municipalities additional rights, including receiving funding from Serbia. That leaves mediators with a difficult puzzle: to come up with a compromise that differs from that plan, which Serbia rejected, and yet strikes a deal in which everyone both gains and loses something in rough proportion.

Threading this needle will be no small task, but there are cautious grounds for hope. Some political leaders in both capitals want a deal and show signs of willingness to compromise. Serbia has one big concession to make: to recognise its former province as an independent equal. Kosovo arguably could match this move with one of two concessions. The first would be to offer its Serbian minority much broader autonomy; in that event, Belgrade should likewise offer similar arrangements to communities in Preševo that house major Albanian populations. The other would be for the two states to exchange territory along their border, swapping Preševo for the northern Kosovo municipalities.

Some European capitals believe that redrawing borders could create a destabilising precedent that would reverberate elsewhere in the Balkans and possibly beyond.

Between these options, autonomy is both the better alternative and the preferred choice of many European governments. There are several successful European models of significant local autonomy for areas in which the central government’s hand is scarcely felt – for example, Finland’s Åland Islands, Italy’s Trentino-Alto Adige and Spain’s Basque Country. By contrast, some European capitals – most prominently Berlin – believe that redrawing borders could create a destabilising precedent that would reverberate elsewhere in the Balkans and possibly beyond.

The parties do not necessarily share this perspective, however. Although there are critics of autonomy and land swaps in both Kosovo and Serbia, autonomy appears to provoke the strongest negative reactions on both sides. Crisis Group’s reporting suggests that these come largely from Kosovo leaders, who view it as a prelude to secession or a recipe for the kind of gridlock that plagues nearby Bosnia and Herzegovina, where most decisions require leaders of both entities and all three main ethnic groups to agree. Absent a change of heart, this could make land swaps, which historically Serbian leaders have also seemed to prefer, the only viable route to resolution. If that is the case, European officials will face the decision whether to stand in the way of such a deal, which some have hinted they have previously done. (This is certainly plausible since, as gatekeepers to EU membership, member states have considerable leverage over aspirants such as Belgrade and Pristina.)

The EU can help the parties reach agreement in five ways.

First and most important, EU member states should review their common position with respect to the objectives of the Belgrade-Pristina negotiation. To date, the EU has been hindered from expressly stating that recognition is a goal by its five member states that do not recognise Kosovo’s independence. Although their positions are informed by domestic politics and unlikely to change, it is nevertheless worth exploring. As the member state that has most actively sought to unlock the impasse, Germany could probe whether the non-recognisers would be willing to soften their stance in order to facilitate negotiations. Further, even while they may express a preference for a different outcome, the EU and its member states should lift any refusal to countenance a deal incorporating a border change so long as it is consistent with human rights and international law, and should make clear they will not impede the EU accession process on this account.

Secondly, the EU and its member states should convey that they read the EU special representative’s mandate to allow for discussion of all potential solutions to the dispute that comport with human rights and international law. On its face, the mandate requires the special representative to seek “a legally binding agreement that addresses all outstanding issues” and to work toward a deal that encourages “regional stability” – language that is read by some to preclude discussion of land swaps. That reading, however, would seem to dismiss the possibility that mutual agreement on land swaps could lead to greater stability by resolving the main outstanding dispute in the region, laying a foundation for good relations between Belgrade and Pristina, and removing an obstacle to integrating both Kosovo and Serbia into international organisations and institutions like the EU that put a premium on human rights protections for minority populations.

The EU can work with the U.S. to help Pristina consolidate a viable approach to talks.

Thirdly, the EU can work with the U.S. to help Pristina consolidate a viable approach to talks. Little can be done as long as Kosovo’s delegation cannot speak for a reasonably united government. But right now that is a struggle: its president is facing likely indictment for war crimes and his party is in disarray; the country’s largest and most popular party is in opposition; and the governing coalition itself is divided on how to approach dialogue with Serbia. For many reasons, including the role the U.S. played in the 1999 conflict and in the 2008 declaration of independence, Pristina’s elite trusts Washington more than it does any European actor, and the U.S. will likely need to play a leading role in helping Pristina clarify its negotiating platform. The EU should support this.

Fourthly, talks require a variety of safe forums, including some far from the public eye, in which leaders can explore options without fear of being accused of betraying the national interest. The rhythm of working groups and summit meetings hosted in Brussels should be supplemented by other opportunities for the parties to speak candidly in the company of trusted interlocutors. The delicacy of the main issue of recognition, as well as whatever Pristina might need to offer in return, makes this a necessity. The EU can offer diplomatic channels for parallel track discussions as can its member states and friendly nations such as Norway and Switzerland.

The search for a final agreement is hampered by pervasive misinformation in the western Balkan public sphere.

Finally, the search for a final agreement is hampered by pervasive misinformation in the western Balkan public sphere, for which Belgrade and Pristina are largely to blame. For many years, both have encouraged their peoples to believe that strategic victory was possible without meaningful compromise, and that certain lines would never be crossed. But crossing those lines is the only realistic way to reach an agreement. Having repeatedly been told they can get something for nothing, Serbs and Kosovars are understandably reluctant to support compromises that are at least symbolically painful. They are also in no position to make an informed choice between the status quo and its alternatives. European and other actors have perhaps unwittingly contributed to this situation, by implying an ability to deliver a win for either party by exerting irresistible pressure on its counterpart, or by offering it inducements. The special representative should start making clear that European pressure will not resolve the dispute, and that the only way to a political settlement is through compromise between the parties.

Serbia and Kosovo: The Path to Normalisation

Kosovo and Serbia: A Little Goodwill Could Go a Long Way