Russia vs Georgia: The Fallout

The Russia-Georgia conflict has transformed the contemporary geopolitical world, with large consequences for peace and security in Europe and beyond.

The Russia-Georgia conflict has transformed the contemporary geopolitical world, with large consequences for peace and security in Europe and beyond. Moscow’s initial moves into South Ossetia as large-scale violence broke out there on 7-8 August were in part a response to a disastrous miscalculation by a Georgian leadership that was impatient with gradual confidence building and a Russian-dominated negotiations process. But Russia’s disproportionate counter-attack, with movement of large forces into Abkhazia and deep into Georgia, accompanied by the widespread destruction of economic infrastructure, damage to the economy and disruption of communications and movement
between different regions of the country, constitutes
a dramatic shift in Russian-Western relations. It has undermined regional stability and security; threatened energy corridors that are vital for Europe; made claims with respect to ethnic Russians and other minorities that could be used to destabilise other parts of the former Soviet Union, with Ukraine a potential target; and shown disregard for international law.

Russian actions reflected deeper factors, including pushback against the decade-long eastward expansion of the NATO alliance, anger over issues ranging from the independence of Kosovo to the placement of
missile defence systems in Europe, an assertion of a concept of limited sovereignty for former Soviet states and a newfound confidence and aggressiveness in foreign affairs that is intimately linked with the personality and world view of Russia’s predominant leader, Prime Minister Vladimir Putin.

Georgia, too, has mishandled its relationships with Russia, South Ossetia and Abkhazia since 2004, abandoning real confidence building and often following confrontational policies towards the conflict regions. With patience it might have demonstrated that the regions would be better served by enjoying extensive autonomy within an increasingly prosperous and democratising Georgia. Instead, President Mikheil Saakashvili and a small inner circle of bellicose officials used menacing and arrogant rhetoric that made the dispute with Moscow and the conflict regions bitter and personal. All sides bear responsibility for the humanitarian consequences of the violence, as tens of thousands of civilians in South Ossetia, Abkhazia and the rest of Georgia have been displaced amid disturbing reports of atrocities.

Western nations must eschew the worst of the Cold War mentality that would further isolate Russia, but engagement, as UK Foreign Secretary David Miliband has put it, has to be “hard-headed”. Russia cannot be allowed to maintain a military force in Georgia except as part of an international peacekeeping mission with non-Russian command, with a clear and mutually acceptable mandate in South Ossetia and Abkhazia. The ceasefire signed on 15-16 August must be respected, and Russian troops must return promptly to the positions they held on 7 August, honouring the spirit of
a loosely worded agreement. International monitors should be deployed in Georgia proper to observe Russian withdrawal and return of displaced persons (IDPs) and then serve as an interim measure to help maintain the ceasefire in South Ossetia and Abkhazia until a peacekeeping mission can be created.

Russian participation is probably necessary as a practical matter in the peacekeeping mission, although
serious questions should be raised about the motives of the Russian forces that Moscow describes as peacekeepers. Command and composition should be genuinely international. All Georgian and Ossetian civilians displaced since 7 August need to be immediately allowed to return to their homes. The Russians and Georgians should agree to and cooperate with investigations to establish responsibility for human rights abuses during the conflict, including by the International Criminal Court (ICC) and perhaps the Organization for Security and Co-operation in Europe (OSCE).

None of this will be easy or even possible without a combination of significant pressures and pragmatic incentives to gain essential Russian approval. Moscow must be made to understand the advantages for its prestige, power and economy of being a partner in ensuring security in Europe rather than an outlier, subject to threats of exclusion from such institutions as the G8 and World Trade Organization (WTO).

The crisis also reflects serious mistakes by the U.S. and the European Union (EU) in Georgia since 2004, most significantly failing to adequately press President Saakashvili to abandon a quick-fix approach toward restoring Georgian control over South Ossetia and Abkhazia. The Georgian army was trained and sold weapons without ensuring that these would not be used to recover the conflict territories, and Russia’s anger over these actions and other perceived post-Cold War slights was misread. Instead of concentrating on democratic institutions and rule of law, the U.S. too often focused its support on Saakashvili personally, even as he engaged in reckless and authoritarian behaviour. As the long-frozen conflicts in South Ossetia and Abkhazia began to heat up, Georgia’s partners did too little to encourage it to engage more substantially in confidence building and dialogue with the de facto authorities and Russia.

With regard to NATO, the division evident at its
Bucharest Summit in April 2008 on whether to approve a membership action plan (MAP) for Georgia has been exacerbated. Those countries, led by the U.S., who support Georgia’s accession are pointing to the Russian attacks as clear proof that Georgia needs the protection of NATO security guarantees; those that oppose it believe that NATO dodged a bullet by not committing itself to go to war against Russia in defence of a capricious and reckless government in Tbilisi. A decision on MAP or membership status should not be taken in the heat of the current crisis. It will be difficult to finally resolve the membership issue, in relation to both Georgia and other potential members, without addressing the larger question of NATO’s future role as a security organisation.

At the broader level, the crisis raises significant questions about the capacity of the EU, the UN and NATO to address fundamental issues. While European leaders stepped forward to achieve the ceasefire agreement, their inability to put forward a forceful response to the Russian action reflects a lowest common denominator approach that discourages stronger and more innovative policies. Similarly, the UN Security Council, divided by whether to include references to Georgia’s territorial integrity in either a resolution or statement, has issued nothing on the conflict since it began to boil over on 7 August. In an unhappy reminder of the Cold War years, the conflict has called into question the Council’s capacity to address any issue over which P-5 members have significantly different interests. And in the process of seeking justification for its actions, Russia has also misstated and distorted the UN-approved principle of “responsibility to protect”.

Georgia and Russia: Why and How to Save Normalisation

After a brief period of independence between 1918 and 1921, Georgia was incorporated into the Soviet Union. The nationalist movement grew in importance in the late 1980s, consolidating
after Soviet troops killed 21 independence demonstrators in Tbilisi on 9 April 1989. Independence was declared on 9 April 1991. Georgia’s history since has been marked by political
instability and conﬂict over breakaway regions.

In this video, Crisis Group's Europe Program Director, Sabine Freizer, discusses the implications of the Georgia-Russia conflict. Use this interactive to browse through events that took place throughout the months of August and September 2008, and learn more about the historical background of the conflict. 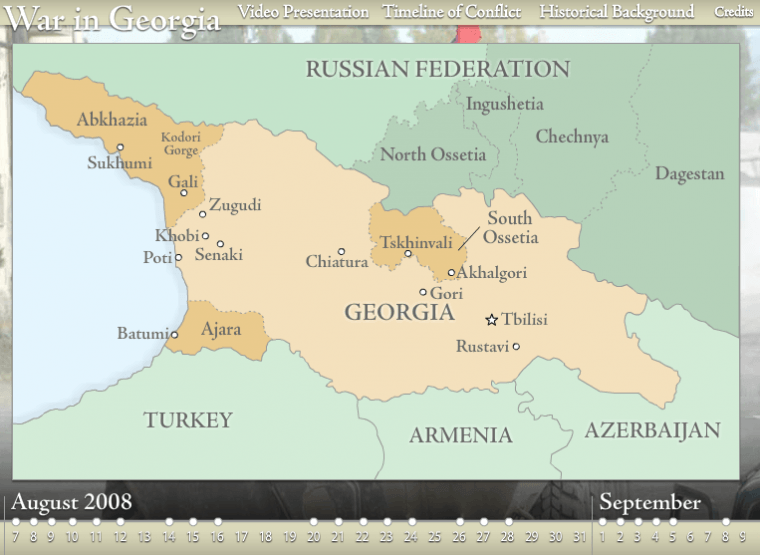