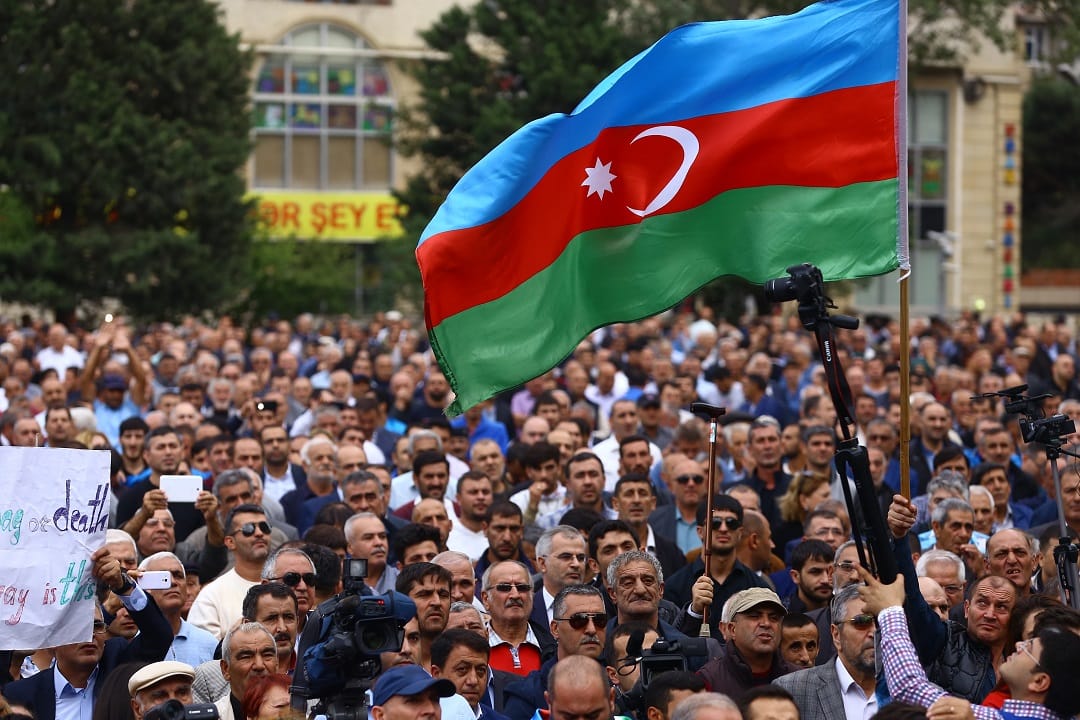 The April 2018 “velvet revolution” in Armenia has brought new meetings and helped improve the dynamics of the three-decade-long conflict over Nagorno-Karabakh. Much more needs to happen to reach peace, but Azerbaijan’s old scepticism is giving way to cautious hope in diplomacy.

A series of direct contacts between Azerbaijan and Armenia have brought hope to the two countries’ decades-long impasse over Nagorno-Karabakh, a conflict that began as the Soviet Union collapsed. But while these meetings, on the heels of a change in power in the Armenian capital, bring new dynamism, much has to be done before true progress is possible.

The Azerbaijani and Armenian leaders, Ilham Aliyev and Nikol Pashinyan, last met in person on 22 January 2019 at the World Economic Forum in Davos, their third meeting since the latter came to power in Yerevan last April. Their January discussion, held without mediators, came just six days after the two countries’ foreign ministers met in Paris, where they agreed to take concrete measures to prepare their populations for peace.

Thus far, these meetings’ most significant outcome is a September agreement to build a ceasefire control mechanism and a communications channel between state representatives. These two measures have calmed the Line of Contact, leading to the fewest combat casualties there since 2013. Along with Armenia’s political transformation, the reduced fighting has yielded optimism about the prospect of more meaningful talks to come.

Baku appears to believe that the peace process can now move forward even without the help of the Organization for Security and Co-operation in Europe (OSCE) Minsk Group, created in 1992 to help resolve the conflict. In December, Aliyev gave the clearest signal to this effect, saying “2019 can be a breakthrough year”. His statement received little global attention but reverberated at home. But just what breakthroughs may be possible remains uncertain.

For the government, the hopes of progress represent a break with the recent past. Clashes erupted in Nagorno-Karabakh in April 2016, marking a low point in relations between the two governments. Both before and after the exchange of fire, ruling elites in Azerbaijan felt that Pashinyan’s predecessor, former President and Prime Minister Serzh Sargsyan, was negotiating in bad faith. Today, they seem to regard their Armenian interlocutors with newfound respect.

The government has matched its rhetoric with actions, making important personnel changes that seem to be laying the groundwork for direct talks with Armenia. Specifically, high-profile appointments in state agencies overseeing displaced persons show that Baku is taking that basket of issues more seriously. In April, Baku named a new chairman of its State Committee for Refugees and Internally Displaced Persons, Rovshan Rzayev, an outspoken advocate for meeting the needs of the displaced in education and housing. In December, it designated a capable career diplomat, Tural Ganjaliyev, as chairman of the Community of the Nagorno-Karabakh region of Azerbaijan – a government institution representing Azerbaijanis displaced from the former Nagorno-Karabakh Autonomous Oblast. Previously, the Azerbaijani leadership had not considered the Community a priority. Civil society leaders had criticised the Community for its poor public relations, at home and abroad, which allowed the voices of Nagorno-Karabakh Armenians to dominate the discourse.

The Azerbaijani authorities hope that economic pragmatism will make Armenia amenable to considering Baku’s plan for a comprehensive peace agreement.

The move to strengthen the Community may also be a reaction to Pashinyan’s demand that Armenians from Nagorno-Karabakh – who run the de facto authority in the territory – be officially represented in negotiations. By putting a senior official in charge of the body, Azerbaijan is channelling the statement of the 1992 OSCE Council of Ministers meeting that Karabakh Azerbaijanis are “interested parties” in the conflict just as Karabakh Armenians are. If Armenia demands the de facto Nagorno-Karabakh authorities’ participation in negotiations, it appears, Azerbaijan will counter by insisting that Nagorno-Karabakh Azerbaijanis also have a seat at the table. But crucially, these actions imply expectations that the table will, in fact, exist.

Much of the shift in sentiment is rooted in the change in leadership in Yerevan. Azerbaijani officials see good omens in the new Armenian government’s stated desire to introduce structural economic reforms and raise living standards. To boost its economy, they believe, Armenia would need to participate in regional economic projects. This is impossible as long as conflict persists. Not only is open trade with Azerbaijan precluded, but Turkey, which is central to the energy and transport networks that fuel the region, closed its borders with Armenia in 1993, after the UN Security Council adopted a resolution demanding the withdrawal of local Armenian forces from the Kelbajar district and other recently occupied areas of Azerbaijan. Baku refers to this state of affairs as the “self-isolation” of Armenia, and believes that the new government in Yerevan wants to end it.

Amid the official optimism, some independent Azerbaijani experts have expressed doubts to Crisis Group researchers. They dismiss the recent spate of contacts as just one more round in two decades of on-and-off negotiations. As they see it, the discussions have failed to move beyond basic principles since 2007 – and there is no reason to think that they will now. They argue that the April 2016 clashes, which actually achieved some territorial gains for Baku, raised popular hopes in a military solution to the standoff.

Sceptics of the official optimism also argue that Armenia does not see its economic “self-isolation” through the same lens as do Azerbaijani authorities. Armenia has expressed readiness to open its borders with Turkey, but without pre-conditions tied to conflict resolution in Nagorno-Karabakh. Armenia’s economy, although limited by isolation, has not been destroyed by it, in part thanks to Russian support. This suggests that economic benefit alone may not be sufficient incentive for the Armenian side to compromise on its core concerns in Nagorno-Karabakh. As for the “six D formula”, authorities in Yerevan have never discussed such grand ideas.

Crisis Group research suggests that the dramatic changes in Armenia in 2018 and the Azerbaijani authorities’ positive spin have led to growing openness among the Azerbaijani public to a diplomatic solution.

Past attempts to find a solution sound a cautionary note. Most recently, the Lavrov plan-proposed by the Russian foreign minister to the Armenian and Azerbaijani sides in 2015 (and again after the 2016 April escalation as a peace proposal) – postulated the return of some lands to Azerbaijani control, return of Azerbaijani IDPs to their homes, and a peacekeeping mission to Nagorno-Karabakh. It would have left the status of Nagorno-Karabakh unresolved for the time being. In Azerbaijan, the plan was criticised by both independent experts and government officials as “minimalist” and “defeatist” because it would have recovered only five of seven Armenian-controlled territories for Azerbaijan and would bring Russian peacekeepers to the conflict zone. Armenia also strongly opposed the Lavrov plan, because it provided no clarity on the future legal status of Nagorno-Karabakh. These positions underline the maximalist goals both sides retain for any negotiation, and bode ill for slow, step-by-step processes.

These challenges aside, Crisis Group research suggests that the dramatic changes in Armenia in 2018 and the Azerbaijani authorities’ positive spin have led to growing openness among the Azerbaijani public to a diplomatic solution. This feeling is particularly pronounced among IDPs, the people most affected as the conflict continues. But while public support may make it easier for Baku to come to the table, high public expectations combined with a history of maximalist positions can also constrain government options, particularly if negotiations prove arduous.

The Azerbaijani authorities should take care to manage public expectations of a process that, no matter what the parties’ intentions, lengthy and incremental. The key will be to reach intermediate understandings with the Armenian side that the government can present as tangible progress without exaggerating these achievements.

Already, local media in Azerbaijan misinterpreted the 16 January commitments of Elmar Mammadyarov and his Armenian counterpart to “prepare the population for peace”. That wording does not mean that the parties have already reached an agreement. The misperception stems in part from the fact that the U.S., French and Russian presidents used similar language at a summit in 2011, which seemed on the verge of a peace deal before talks failed. By recycling this formulation, Baku and Yerevan sent the message that peace once again was close at hand. As Rauf Mirgadirov, a well-known expert, said, “if the sides have not agreed to some elements of a peace agreement, then there is nothing to tell people. Ultimately, you are not preparing the population for anything’”. Should the great expectations – especially among IDPs – be dashed, the damage to public faith in diplomacy might be long-lasting.

The fact is that preparation of the public for peace implies preparation of the public for long negotiations and the potential for compromise. This includes both public debate and more transparency about what is happening at the negotiating table. More engagement of Azerbaijani and Armenian civil society groups alongside official negotiations could also be valuable to underscore the simple proposition that peace is possible with the other side, preferable to a military solution, and should involve some gains for Armenia as well. Moreover, given the likely long-time frame for talks, a symbolic, humanitarian gesture such as an exchange of detainees could help keep the momentum going. As one Azerbaijani official told Crisis Group: “Notwithstanding the population’s decreased trust in diplomatic negotiations, if they see a tangible result, even a minimal one, it could dramatically change their thinking about possibility of resolution via talks”.

Azerbaijan has begun taking necessary steps forward, such as the personnel changes noted above and the marked adjustments to government rhetoric. These tactical shifts, however, sidestep the elephant in the room: both parties must understand – and make sure the respective populations understand – that to succeed, a peace process will be painful and protracted and must at least begin as open-ended.

This commentary is co-published with Italy’s Istituto per gli Studi di Politica Internazionale, which first published it here on 6 February 2019.

For Azerbaijan, Armenia’s Political Upheaval is a Double-edged Sword