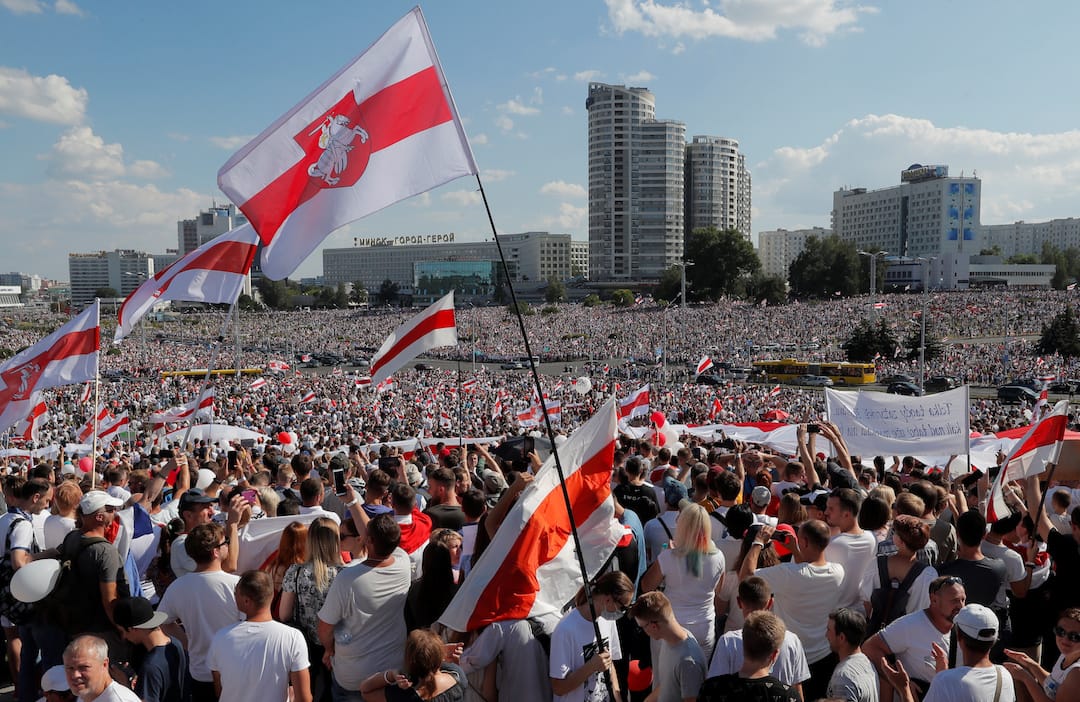 How to Help Belarus

President Aliaksandr Lukashenka’s government is teetering after he declared victory in a rigged 9 August vote. Protests have exploded. Moscow, Brussels and other stakeholders should avoid transforming the Belarus crisis into a European one, cooperate to warn against repression and insist on new, fair elections.

As protests and strikes in Belarus enter their second week, Moscow, Brussels and many other European capitals have struggled to respond. The politics that brought Belarusians to the streets of their villages, towns and cities are local: they are angry that their president of 26 years has tried to steal yet another election. But if the crisis in Belarus is at its core anything but an East-West standoff, it is happening at a time when hasty responses by either Russia or Western states could turn it into just that. Because such a showdown would serve no one’s interests, all stakeholders should take care to consult with each other and coordinate their policies, even as they do what they can to help Belarus and Belarusians.

Aliaksandr Lukashenka has been president of Belarus since 1994, and both citizens and outside observers have roundly questioned the legitimacy of every vote in the country since the one that brought him to power. This one, held on 9 August, was even less transparent than its predecessors. The Organization for Security and Co-operation in Europe (OSCE) complained that it was invited too late to send observers, while staff from the Parliamentary Assembly of the Council of Europe (PACE) stayed away due to COVID-19. Lukashenka’s primary opponent on the ballot, Sviatlana Tsikhanouskaya, registered to run only a few weeks ago, when her husband, along with other prospective candidates, was prevented from doing so and arrested instead.

When Lukashenka claimed to have garnered an improbable 80 per cent of the vote, a lot of Belarusian citizens simply did not believe him.

Tsikhanouskaya’s central campaign promise was a new, free, fair and transparent election within six months of taking office. Her campaign drew tens of thousands of citizens to its rallies in the lead-up to the vote, the first sign that this time might be different. And, indeed, when Lukashenka claimed to have garnered an improbable 80 per cent of the vote, a lot of Belarusian citizens simply did not believe him. Solid evidence that they are right lies in their own numbers, which grow each day, even as both demonstrators and passersby are arrested en masse; the use of rubber bullets and, reportedly, live ammunition; and the clear signs of torture on the bodies of those released from Lukashenka’s jails, which are rapidly running short of space.

As even state-run factory workers call on Lukashenka to leave, television presenters refuse to work, and some police appear to join the protesters, the president has asked Moscow for help. This is a change – albeit not the first one – for Lukashenka, who one week ago claimed that Russian (as well as Polish) “puppet masters” were behind the opposition and, prior to the 9 August vote, announced the arrest of 33 alleged members of a Russian private militia, whom he accused of planning to destabilise the country. (Thirty-two were sent back to Russia on 14 August. The one with Belarusian citizenship stayed.) Although Russian President Vladimir Putin congratulated Lukashenka on his victory, relations between the two countries had been cooling for a while, as the Belarusian president periodically courted Western support to limit Moscow’s leverage.

Putin may see advantages in supporting a weakened Lukashenka – particularly if European states deem him illegitimate. Lukashenka may be counting on this eventuality. His most recent comments have clearly been aimed at Moscow, alleging that NATO troops are massing near the country’s borders, something the alliance has denied (and of which there is no evidence). Some in the Kremlin may see this crisis as an opportunity for Russia to bring Belarus back more squarely into its corner. Nor would Moscow relish the precedent of an ally and neighbour losing power in the face of popular protests. That said, the Belarus opposition so far has not been particularly hostile to Moscow, and Russia risks alienating them if it throws its weight behind the discredited president. Lukashenka’s demise is far from guaranteed, but it seems increasingly plausible. Russia has reasons to keep its options open.

Up to now, Western countries have largely limited themselves to expressions of concern, although a few, including Lithuania, Estonia, the UK, Ireland and Canada, have declared the election illegitimate. But growing Russian/European divergence on Belarus could have more serious geostrategic implications. Just as NATO strategists often postulate that war with Russia would begin as a result of a Russian attack on a Baltic country, Russian scenarios for that same war often start with a Western-backed revolution in Belarus. What is happening today reflects neither scenario: as noted above, it is Lukashenka, not the opposition, who reached out to Western leaders in the past. But Russian fears of Western influence in Belarus coupled with Western concerns over Russia’s hold on Minsk could undermine efforts from both to respond to the unfolding crisis and make it worse.

Instead of competing, Russia and other European states would be better advised to work together to help Belarusians chart their own path forward.

Either direct Russian military intervention or heavy-handed Western efforts to foster a transition would risk transforming this crisis into the NATO-Russia standoff it is not and turn the people of Belarus into pawns. Because this struggle has not been about East-West competition, Lukashenka’s fall, if it comes, need not be a geostrategic loss for Moscow any more than his survival would be a victory over Brussels or Washington. Instead of competing, Russia and other European states would be better advised to work together to help Belarusians chart their own path forward, including through mediation involving Tsikhanouskaya (now in Lithuania for her safety) and her team. As of 17 August, Lukashenka has called for a constitutional referendum followed by new elections, an apparent effort to buy time. But with or without him, the next step ought to be the more transparent, fair race that Tsikhanouskaya promised.

In the longer term, Belarus will need support from all of its neighbours in order to rebuild, particularly given the public health crisis caused by poor management of the pandemic by Lukashenka’s team (which dismissed the coronavirus’ risks) – a crisis that could worsen as a result of mass detentions. In the meantime, as long as the threat of further violence and repression remains, more states should follow Lithuania’s lead and ease entry requirements – paired with appropriate quarantine – for Belarusians, whether temporarily or, if needed, for the still uncertain long term.

What Does Belarus’s President Lukashenka Want?

Behind the Frictions at the Belarus-Poland Border