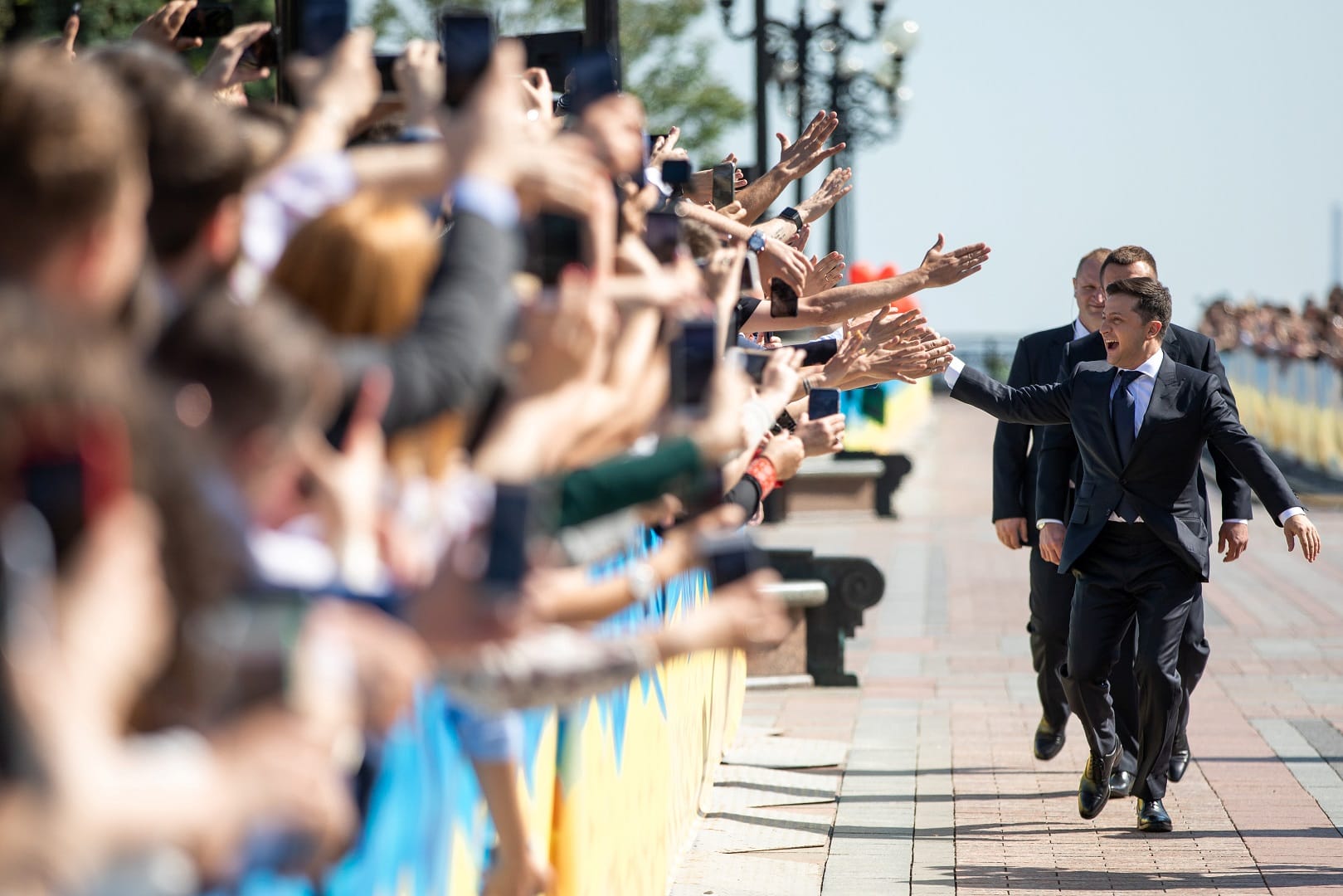 Ukraine's President-elect Volodymyr Zelenskiy greets his supporters as he walks to take the oath of office ahead of his inauguration ceremony in Kiev, Ukraine May 20, 2019. ÊPavel Zmey/Ukrainian Presidential Press Service/Handout via REUTERS
Commentary / Europe & Central Asia 11 June 2019

Is Russia Changing Its Calculus in Eastern Ukraine?

Amid expectations that Russia will test Ukraine’s new president with escalatory actions, it appears that its calculus is to wait for Kyiv’s administration to make the first move – while quietly helping the self-proclaimed Donetsk and Luhansk People’s Republics entrench themselves economically.

Five years into a war in its east, Ukraine has elected an unlikely new president: professional comedian Volodymyr Zelenskyy. To date, Zelenskyy has hinted at both dialogue with and new punitive measures against Ukraine’s formidable neighbour to the east, but offered little in the way of specific plans for either course of action. Some Ukrainians fear that Moscow might take advantage of this seeming hesitancy to cement its influence in the Donetsk and Luhansk People’s Republics (D/LPR) – the breakaway statelets in eastern Ukraine controlled by Russian-backed separatists since 2014. In April, after Zelenskyy’s election, but before his inauguration, Russian President Vladimir Putin issued a decree making it easier for D/LPR residents to obtain Russian citizenship. Many in Ukraine saw in this move a threat that Russia would seize the moment of Zelenskyy’s ascent to gain full control of the statelets by either recognising their independence or annexing them – or that Moscow would seek to co-opt Zelenskyy himself. Outgoing President Petro Poroshenko, who lost to Zelenskyy, tweeted that his “inexperienced” rival would allow the Kremlin to “return Ukraine to Russia’s orbit”.

Before Zelenskyy’s election, some in Moscow did express hope that he could undertake a “reset” in Russian-Ukrainian relations. Since then, the mood has become more guarded. Putin has refused to congratulate the new president in Kyiv. Nor has the Kremlin shown any inclination thus far to exploit Zelenskyy’s inexperience through escalation. Instead, Moscow appears to be taking steps to consolidate the status quo in eastern Ukraine even as it tries to figure out the new Ukrainian leader.

Russian officials are baffled by what they see as Zelenskyy’s flip-flopping between overtures toward reconciliation and tough talk.

Russian officials are baffled by what they see as Zelenskyy’s flip-flopping between overtures toward reconciliation and tough talk. He has proposed both a referendum on peace talks with Moscow and tougher U.S. sanctions on the Kremlin for its continued backing of pro-Russian separatists in the east. “Poroshenko was an adversary”, said one official. “At least we knew where we stood. With Zelenskyy, we don’t”. Another said: “We don’t know who stands behind him”. In short, the Kremlin is waiting for Zelenskyy to make the first move.

The decision to wait fits into Moscow’s quietly shifting strategy in eastern Ukraine. From 2014 to 2018, the Kremlin bolstered the D/LPR with military support with the apparent aim of destabilising Ukraine. Its vision of the implementation of the Minsk agreements, signed during talks involving Russia, Ukraine, Germany and France in 2014 and 2015, in which Kyiv would be forced to grant these statelets autonomy on their terms, would have given Russia substantial and lasting influence in Ukrainian politics. Since last year, however, Moscow has changed tack. While it continues to pay lip service to Minsk, its priority has shifted from the military conflict itself to helping the statelets mitigate their financial dependence on Russian support.

This approach aims to entrench the statelets’ nascent institutions while allowing Moscow to avoid costlier moves like recognising their independence or annexing them. It keeps Minsk alive, but unimplemented, such that Russia can continue to accuse Ukraine of failing to abide by its terms. It also lets Moscow off the hook financially, as better developed client economies would have less need for Russian subsidies. If those economies are better integrated with Russia’s own, with gains for each, so much the better. There’s a reason why the Emergencies Ministry, which has been sending convoys of humanitarian aid, has paused its shipments in recent months: to paraphrase one Russian official, it is time for the statelets to stop being dependent on Russian aid and start trying to break even.

The economic embargo that Ukraine imposed on D/LPR in 2017 makes above-board trade difficult, and may push them closer to Russia, albeit via grey zone commercial interactions. For example, according to media reports and Ukrainian specialists interviewed by Crisis Group, anthracite coal and other minerals travelled freely across the line of contact into Ukraine from the start of the conflict in 2014 until the blockade. Now, those sources say, a complicated scheme sends these minerals first east to Russia, then west to Belarus, and from there to other markets – including Ukraine itself.

Because Russia denies being a party to the conflict and says it offers nothing to the D/LPR but humanitarian aid and moral support, it is difficult to verify how exactly Moscow is assisting the coal trade or any other commerce. But for over a year now, Kremlin-connected observers have noted the growing influence of the deputy prime minister, Dmitry Kozak. Kozak, who is responsible for Russia’s energy sector, oversees a government commission that manages humanitarian aid to rebel-held areas in eastern Ukraine. Russian investigative reporters have linked his role to a Russian decision to prioritise business integration with the statelets, including allegedly facilitating coal trade from Ukraine’s east.

Asked about the prioritisation of economic above military ties, one Russian official said that the current D/LPR leadership is not as militaristic as its predecessors. In November 2018, the self-proclaimed statelets held elections, which were not recognised outside of Russia and which Moscow allegedly choreographed. Denis Pushilin, who became DPR leader, is widely believed to be less ideologically passionate, less popular and thus easier to control from Moscow than his assassinated predecessor Aleksandr Zakharchenko. Much the same applies to the LPR’s new leader, Leonid Pasechnik, who took over after a power struggle in 2017 and retained the leadership in last year’s election.

The Kremlin’s offer of Russian passports to D/LPR residents may also be intended to strengthen the breakaway region’s economies and ties to Russia. One Kremlin adviser said the measure had been in the works for some time. Domestic political pressures in Russia might also have played a role. Many Russians know that life in D/LPR is difficult, as Crisis Group has reported. During a widely watched call-in show featuring Putin last June, D/LPR residents phoned to complain about how hard it was to settle in Russia after fleeing the war. On the air, the president ordered the Interior Ministry to make it easier for them to obtain citizenship. Issuing passports strengthens D/LPR residents’ ties to Russia. If more residents go to work in Russia, they may well send remittances home, another boost to the local economy, even as they provide cheap labour to Russia.

While Ukrainians are surely right to distrust Russia’s intentions in the east, Moscow’s actions so far do not suggest a plan of escalation.

While Ukrainians are surely right to distrust Russia’s intentions in the east, Moscow’s actions so far do not suggest a plan of escalation. The passport move does signal Moscow’s resolve to bolster ties with Russian speakers in Ukraine. But Zelenskyy’s election was likely not its impetus. “We’re not orienting our policy around Zelenskyy”, a Russian official said. Overestimating Moscow’s appetite for escalation could have its own negative consequences. If Kyiv interprets Moscow’s move to expedite passports as escalatory and pushes back, even if only rhetorically, it risks feeding a spiral of both words and action, rendering the escalation prophecy self-fulfilling.

Instead, the new administration in Kyiv and its European supporters could take advantage of Moscow’s waiting game, and use the time to construct a better policy for engaging the people of the east. Kyiv should also decide on what terms it wants to deal with Moscow in order to move toward real peace, including how it wants to move forward on Minsk. Zelenskyy’s administration is already taking tentative steps in this direction: at a 5 June meeting of the Trilateral Contact Group, formed in 2014 to broker Russian-Ukrainian talks over the rebel-held east, Kyiv’s representatives explored several proposals for a truce, including lifting the embargo. Moscow sounded encouraged, but said it wanted to hear more specifics.

In Kyiv, Zelenskyy faced blowback, however. Because the Trilateral Contact Group meeting came so soon after his election, his offer raised concerns among some Ukrainians that the new president is making concessions to Russia in hopes of sealing a fast truce. Already, some politicians in Kyiv call his proposals a capitulation to Russia.

The president can prove them wrong. First of all, he should avoid rushing proposals in hopes of clinching a fast deal; Moscow in any case is unlikely to commit to concessions in return anytime soon. Secondly, no deal will be viable absent Ukrainian consensus on the conditions under which it can implement its commitments under Minsk. He needs to involve political parties and civil society in Kyiv in formulating proposals for a truce. He also needs to ensure that any proposal is a means of restoring Kyiv’s control over the breakaway regions. Whether he seeks to lift the embargo or agrees to a ceasefire, he must do so with a view to how this helps restore Ukraine’s ties with its citizens in the east and its social and territorial integrity. And, indeed, restored Ukrainian economic relations with this region would push back against Moscow’s efforts and help bring it back into the fold.

Moscow is still sizing up Ukraine’s new president. Zelenskyy should convince his own base that he is developing a plan for eastern Ukraine that will serve Ukraine’s long-term social and political cohesion.

Getting Aid to Separatist-held Ukraine