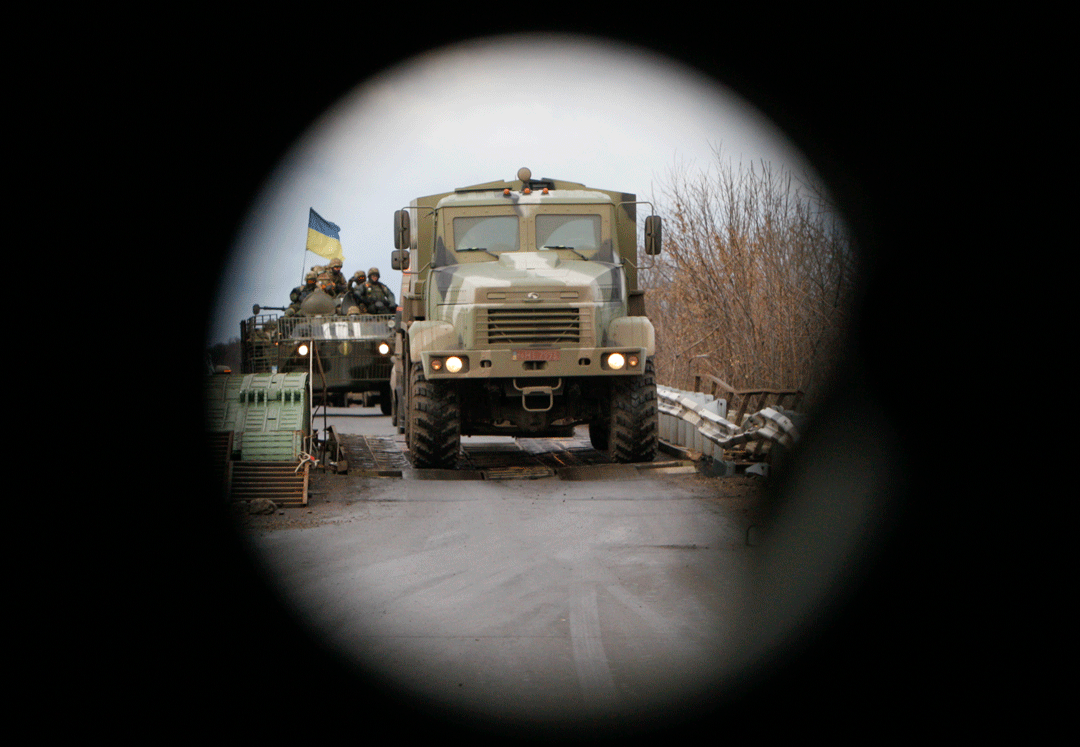 An Ukrainian military convoy is pictured through the shooting spot of an armored personnel carrier (APC) on the road from Kramatorsk to Debaltseve in Donetsk region, on 24 December 2014. UTERS/Valentyn Ogirenko
Briefing 73 / Europe & Central Asia 01 April 2015

Danger of renewed fighting in Ukraine’s east is mounting. Crisis Group’s new briefing shows that neither side is looking to compromise or able to win outright. Our accompanying statement sets out a new Western strategy with Russia to defuse one of the greatest post-Cold War threats to European stability and global order.

A second agreement in Minsk on 12 February produced a ceasefire that for now is mostly holding and measures to de-escalate the conflict. Many officials locally and in Kyiv, Moscow and the West, nevertheless, believe war could resume in Ukraine’s east within weeks. If it does, much will depend on the quality of top commanders on both sides. Ukraine’s army is enmeshed in a command crisis the country’s leaders seem unwilling to admit or address. For the separatist rebels, the command and control Moscow provides could give them the advantage in any new fighting. Meanwhile, President Petro Poroshenko faces criticism from his Western allies about the slow pace of reform, opposition from the political establishment as he tries to pass legislation required by the Minsk agreement and a steady stream of complaints from Donetsk and Moscow that the measures do not go far enough.

This briefing focuses on the negotiations leading to that agreement, the military balance and appetites for further confrontation on all sides, as well as likely scenarios for the immediate future. Crisis Group’s analysis of and policy recommendations on the strategic questions the crisis poses for European stability can be found in a simultaneously published statement.

The most recent separatist offensive began around 18 January and petered out within a month. It was bloody and destructive but demonstrated little more than that neither side has a decisive battlefield advantage. The post-ceasefire defeat of the Ukrainian army in Debaltseve, a railway hub that is strategic because it links the separatist Donetsk and Luhansk territories in the Donbas region, was a traumatic political and military blow to Poroshenko. However, while it allowed the separatists to claim victory, they suffered heavy casualties and did not achieve their stated objectives, notably the seizure of the whole of Donetsk oblast.

The offensive further exposed the deepening malaise within the Ukrainian armed forces, whose incompetent, sometimes corrupt senior commanders are incapable of designing effective combat operations or unwilling to lead them, leaving junior officers on their own, under serious pressure. Mid-level professional officers are speaking openly against their high command, and the government is not responding. Reports from both sides of the battlefield make clear that the Ukrainian forces are determined but lack competent leadership.

Russian training of the separatist forces is bearing fruit. These forces have many problems, particularly a much smaller recruitment pool than Kyiv, a serious lack of experienced commanders and deep factional divisions within their political and military leadership that sometimes explode into violence. Organised crime creates difficulties, and some units still operate semi-autonomously. The state they are fighting for has few political or administrative structures, no money and no economy. Nevertheless, they are moving steadily – with substantial, probably growing, Russian command input – toward creation of a functional army.

The main change Minsk II effected is a ceasefire that has sharply reduced casualties. Both sides claim to have pulled back heavy weapons, as it prescribes; they accuse each other, however, of returning the weapons once observers have left. Most other points of the agreement are also in dispute. The Russians’ successful insistence during the negotiation to retain part of the border with Ukraine in effect under their control indicates they are keeping their military options open.

An early separatist offensive – for example to extend control to the whole of Donetsk oblast – cannot succeed without Russian military aid, advice and, probably, once again substantial numbers of regular Russian troops. Moscow will have to decide whether it wants to commit to this at the risk of more U.S. and EU sanctions. This is problematic for a country looking at 20 per cent inflation, a possible banking crisis and unprecedented capital flight.

Research for this briefing was undertaken in Kyiv and Brussels; it builds on prior reporting on eastern Ukraine and Ukraine’s domestic political situation.