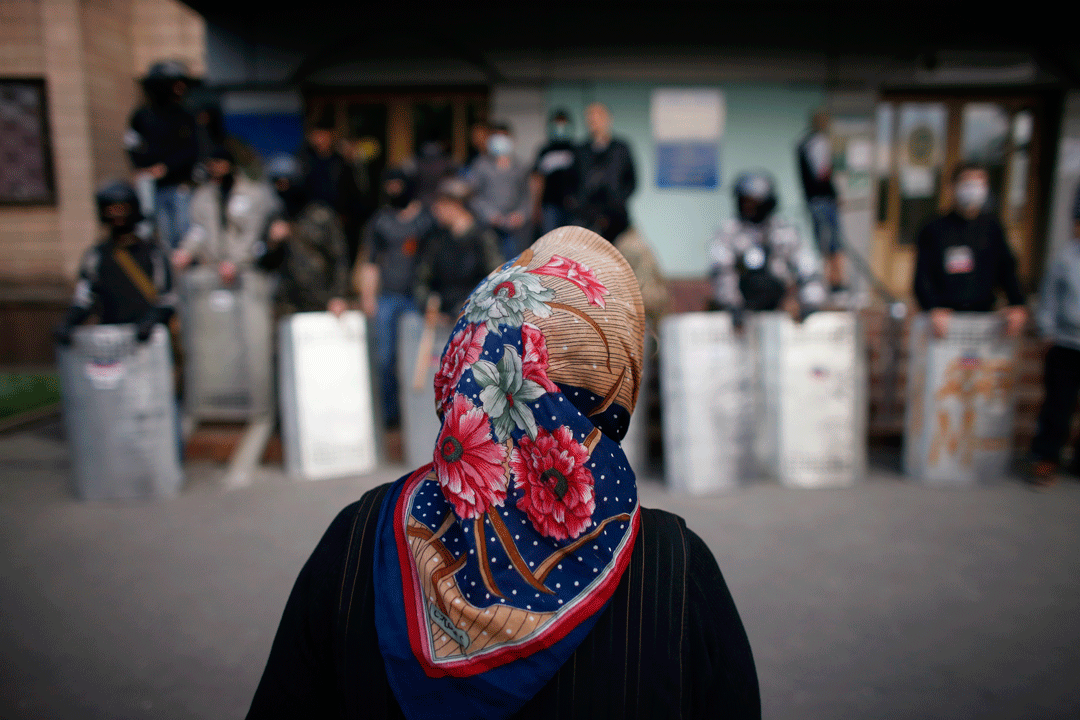 A woman stands in front of pro-Russia protesters outside the district council building in Donetsk, eastern Ukraine on 4 May 2014. REUTERS/Marko Djurica
Commentary / Europe & Central Asia 16 October 2015

What Next for Russia and Ukraine as Conflict Eases?

The most acute phase of the eighteen-month-old Ukraine war is over, at least for now. But nothing is settled yet.

After spending a week in Kyiv and Moscow with a delegation from the International Crisis Group, it is clear that Russia is sliding deeper into economic crisis and political uncertainty. Ukraine, meanwhile, has resolved none of the issues that led to its crisis boiling over into armed conflict.

Russia’s intervention in eastern Ukraine has been a disappointment to Moscow. The Ukrainian army has fought better than expected, and the West has been more united in imposing sanctions than anticipated. President Vladimir Putin now seems to be downplaying any separatist project for eastern Ukraine. He stresses support for the February 2015 Minsk talks, is reining in his eastern protégés and has abandoned the Novorossyia project that would have created a territorial continuum all the way to Transnistria. The people of Donetsk and Luhansk may dislike the authorities in Kyiv, but the majority does not embrace Russia, and sustaining eastern Ukraine is as costly a proposition for Russia as it would be for anyone else.

Ukraine, for its part, has managed to resist. But none of the fundamental issues that led to a war that has killed well over 8,000 people is resolved. Twelve months of half-hearted efforts to reform Ukraine have not reversed 25 years of corruption. There is an admirable generation of young Ukrainians energetically committed to European values, shaming contemporaries in Western Europe who take their democratic inheritance for granted, but the judiciary remains subservient to power and money, there is only a kernel of reformed police and oligarchs still rule the roost. Kyiv’s disregard of its citizens on the occupied zones will further complicate any future reintegration.

Ukraine’s dysfunctional state makes it an easy target for meddling and manipulation.

Above all, Ukraine’s dysfunctional state makes it an easy target for meddling and manipulation. Kyiv fears that Russia will not abandon its pressure, but will simply shift from the military to the political, funding and promoting traditionally pro-Russian politicians keen to capitalise on public dismay at rising prices and disillusion with their leaders.

In Russia, the crisis is no less severe. It started before the war in Ukraine, and before the collapse of oil prices and the rouble. The non-diversification of the economy and deep demographic decline –­ Russia has the lowest life expectancy of all developed countries –­ have taken a serious toll. Russia needs a long period of far greater economic growth to catch up with Western Europe. Right now growth is negative, with devastating impact on the budget: pensions will not match inflation, and tens of millions of Russians face a significant reduction of their income.

The basic contract of the last few years ­– an authoritarian regime in return for a modest improvement in basic living conditions – is being replaced by a new one in which national pride substitutes for material satisfactions. State propaganda, which dominates the media, is back to Stalinist tropes: a Russia surrounded by enemies: the West fomenting revolutions of all colours; and Islamists as part of a wide Western conspiracy against Russia, which has the biggest Muslim population in Europe.

Moscow’s policy of bombing Islamists in Syria and supporting Syrian leader Bashar al-Assad thus addresses what it sees as a real threat to its domestic interests, and at the same time sends a message of resolve to Western powers. In short, Russia has gone beyond dissatisfaction with the status quo to become a revisionist country.

For their part, Western powers are not prepared to sacrifice the aspirations of people, whether in Ukraine or beyond, for the sake of stability. The West has good reason not to trust a president who consistently denies the presence of Russian troops in eastern Ukraine despite overwhelming evidence to the contrary.

What is to Be Done?

At this point where trust between the two sides is close to zero, shared points of reference and common projects are vital to ensure changes occur legitimately, without any renewed use of force. And there is much the West can begin to do to stabilise the conflict where its interests overlap with the old East.

First, make financial support to Ukraine, on rigorous conditions, a much greater priority. The European Union (EU) spends much more money on Greece than on Ukraine, and yet Ukraine is as strategic as Greece, if not more. The painful reforms that Ukraine needs to conduct – opposed by populists like Yulia Timoshenko – will be less painful if there is more EU financial support.

Second, prioritise justice, rule of law, and anti-corruption in technical support to Ukraine.

Third, maintain a united front on sanctions so long as the Minsk agreement is not fully implemented.

Fourth, explore with Russia areas in which some common work could be done. This could be judicious EU engagement with the Russia-dominated Eurasian Union, or the necessary “de-conflicting” of military operations over the skies of Syria, or exploration of the contours of a Syrian settlement, in which Russia, despite its current defiance, will inevitably play a part.

The West should be tough on both its allies and adversaries. Support for Ukraine should only be sustained if Kyiv pushes through reforms, particularly against high level corruption, as its people demand. And, while engagement with the Kremlin is imperative, the West should stress that a true dialogue on crucial international issues can only be possible once Moscow acts on the Minsk peace plan and pulls out of eastern Ukraine.

Originally published in The Guardian