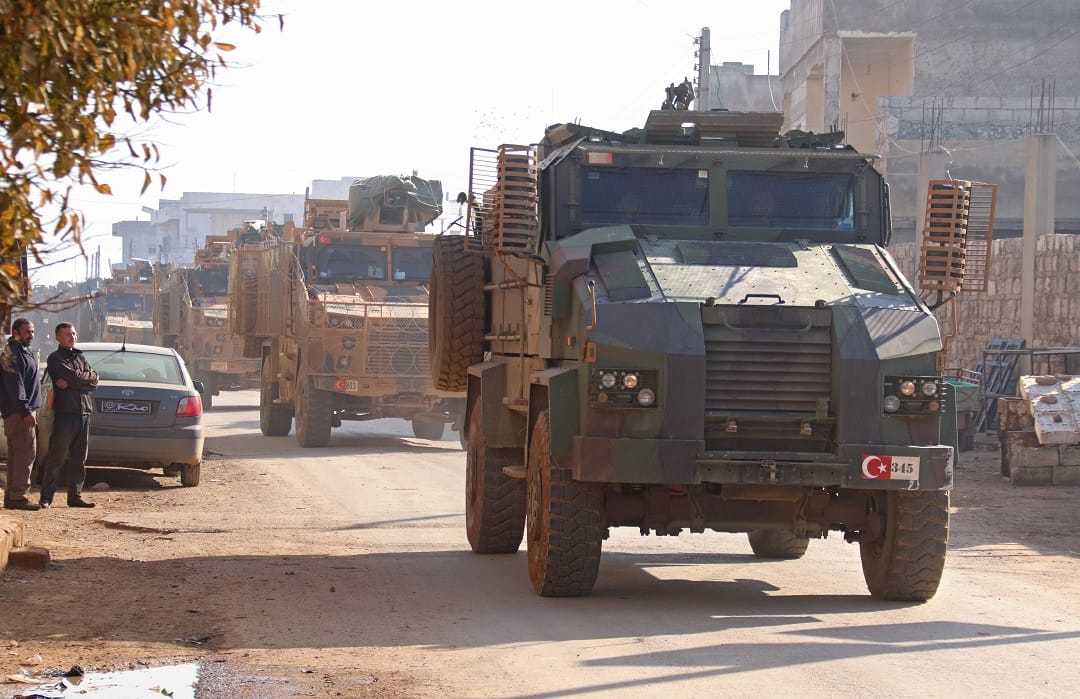 A deadly attack on Turkish forces in Syria has brought Idlib’s crisis to a dangerous crossroads. In this Q&A, Crisis Group’s Turkey, Syria and Russia experts explain what happened and what’s at stake.

An airstrike killed at least 33 Turkish soldiers in Idlib, in the north west of Syria, on 27 February, according to Turkish state media. The strike exacted the highest death toll upon the Turkish military in any single day’s action for more than two decades. Ankara mainly blamed the Syrian regime for the attack on what it called a two-story command headquarters, but hinted as well at Russian responsibility. Russia disclaimed direct involvement but appeared to excuse the attack, saying the Turkish soldiers were in the company of “terrorists”, implying that they were with Syrian rebels.

Whether the strike was deliberate or inadvertent, it is part of a series of increasingly bloody clashes among Turkey, the Syrian regime and Russia over Idlib. The new casualties brought the total number of Turkish soldiers killed in Syria in February to at least 53. Gradually since April 2019, and more rapidly since that December, a Russian-backed regime offensive has retaken swathes of rebel-held territory in Idlib, forcing hundreds of thousands of civilians to flee, often for the umpteenth time since Syria’s civil war started in 2012. One million people are now displaced and many are stuck huddled in freezing temperatures in camps on the Turkish border. With nearly four million Syrians already in Turkey and popular resentment of what many Turks regard as the refugee burden rising, Ankara has long since closed the border to further crossings.

Fearing that any Syrian offensive would add to the number of refugees in the country, Turkey has been sending reinforcements to more than twenty military outposts in Idlib as well as to the Syrian rebel groups with which it is aligned. Turkey wants the Syrian army to return to a ceasefire line agreed to by Russia and Turkey in the Sochi Agreement of September 2018, saying that the regime offensive, with Russian air support, since then has violated that agreement.

How is Turkey reacting?

Within hours of the attack on its forces, Turkey fired on 200 targets in Syria, including Syrian tanks, artillery positions and troop concentrations, according to the Turkish defence minister, Hulusi Akar. “The blood of the martyrs will not be left on the ground”, he said.

Any Turkish attack on Syrian forces risks an uncontrollable escalation resulting in direct confrontation with Russia.

But any Turkish attack on Syrian forces risks an uncontrollable escalation resulting in direct confrontation with Russia. Turkey reportedly has 20,000 troops in Idlib in its observation posts and other bases, who have been rotating in and out since 2018; it also has about 2,000 armoured vehicles in the area. The posts were set up by that year’s Sochi Agreement with Russia and Iran to monitor the ceasefire then in place and to prevent millions of displaced people in Idlib from fleeing onward to Turkey. Since Syria began attacking Idlib in April 2019, the regime forces’ advance has cut off Turkey’s supply lines to at least nine of the observation posts.

Ankara is aware that the assistance it provides to Syrian rebels cannot possibly balance Russian air support for the regime. Nonetheless, it could now double down on its support, both direct and indirect, signaling to Moscow and Damascus that unless they re-establish the Sochi ceasefire, it will continue trying to raise the cost to the regime of its uphill battle to retake all of Idlib. At the same time, perhaps to limit public reactions to the shocking news, the Turkish government blocked access for Turkish residents to Twitter, Facebook and other social media platforms.

How did the situation get out of control?

Heightening tensions over Idlib stem in large part from the unaddressed flaws of the 2018 Sochi deal. The parties agreed to call off what seemed then to be an imminent, Russian-supported regime offensive against the enclave in return for Turkish commitments to enforce a demilitarised buffer zone along the front line from which groups that Russia considers terrorists would be expelled.

In essence, the Sochi accord expected Turkey to contain, police and eventually defeat jihadist groups. This task has proven unrealistic, if only because Ankara has clearly been unwilling, and may well have been unable, to fulfil it. Moscow and Ankara also remain at loggerheads over whether Hei'at Tahrir al-Sham (HTS), should be treated as a terrorist organization to be rooted out under the terms of the agreement. The ceasefire further failed to address the differences between Ankara and Moscow concerning the future of this rebel-held pocket. Turkey seeks to keep the Syrian regime away from Idlib pending a larger political settlement, while Russia wishes for Damascus to reclaim all Syria’s territory first.

The immediate trigger for the 27 February airstrike may have been a particular development on the battlefield, namely, the alleged targeting of Russian aircraft by Turkish-supplied surface-to-air missiles, shoulder-fired weapons known as MANPADS, from Idlib. Russia may have retaliated itself or greenlighted a counter-strike by the Syrian regime’s forces.

But other recent events may have also contributed to an escalatory mood on all sides. The strike came after weeks of inconclusive Russian-Turkish talks about an interim arrangement for Idlib. It also came shortly after news, widely shared on social media, that Turkish-backed rebels armed with MANPADS had retaken Saraqib, crossroads of the M4 and M5 highways, which traverse Idlib from east to west and north to south, respectively. Both highways are vital commercial arteries, and opening them is important symbolically, if nothing else, for the regime’s quest to regain control of the whole of Syrian territory.

Is this incident likely to lead to a direct clash between Turkish and Russian forces?

It is possible that the attack was not meant to target Turkish soldiers. Turkey says it informed Russia of where its soldiers were, but the two countries lack robust deconfliction arrangements, meaning that, as Crisis Group has warned before, mistakes are always a real possibility.

Despite initial hints, Ankara has avoided directly blaming Moscow for Thursday's attack. Together with Russia’s denial, despite credible reports that Moscow was indeed behind it, this stance could indicate that both are leaving room for negotiation. The Kremlin may be preparing to step in to try to dictate conditions for a new ceasefire. On 28 February, the morning after the attack, Russian Foreign Minister Sergei Lavrov said President Vladimir Putin took a call from his Turkish counterpart and expressed Russia’s concern about the escalation and stressed the need for better coordination.

Both sides arguably have an interest in such de-escalation. Turkey’s military options are limited by Russia’s current control over Syrian airspace. Nor does it have any reason to expect robust support from its traditional post-World War II allies in the North Atlantic Treaty Organization (NATO), including the U.S., in the event of a confrontation with Russia in Syria. As for Moscow, it presumably has no interest in sabotaging its overall relations with Ankara, which, from the Kremlin’s viewpoint, have helped distance Turkey from the U.S. and NATO.

Still, tensions between the two seem bound to increase. In recent years, Turkish President Recep Tayyip Erdoğan’s strategy has leaned toward “Eurasianists” in Turkey who strongly favour close ties with Moscow. The death toll of the 27 February airstrike was shockingly high for Turkey, however, and Turkish media played up reports (denied by Moscow) that Russia did not even allow Turkish helicopters into Idlib’s airspace to evacuate the dead and wounded. All this will strengthen the hand of those who seek a rebalancing of Ankara’s strategic orientation toward Turkey’s NATO allies.

Turkey has distanced itself from the West in recent years. What position will the U.S. and NATO take in the current standoff?

Ankara is seeking air support from the U.S. and NATO, though the allies’ willingness to confront Russia in Idlib remains to be seen. Moreover, the U.S. was deeply troubled in 2019 by Turkey’s purchase of Russian S-400 anti-aircraft missiles. In response, it halted Turkey’s participation in the F-35 advanced fighter project and Congress approved a package of sanctions; the Trump administration must now decide which it will try to enforce.

Following an emergency NATO meeting on Syria on 28 February, NATO Secretary General Jens Stoltenberg said the alliance continues to support Turkey through measures including strengthening its air defences. He called on Russia and the Syrian regime to halt their offensive in Idlib and return to the 2018 ceasefire.

Since the clashes are not occurring on Turkish territory, however, there are limits to what NATO can do. If the U.S. agrees to deploy a MIM-104 Patriot surface-to-air missile system, this battery could offer air cover to Ankara along a stretch of the border. But the U.S. may not agree to deploy this system unless Turkey accedes to its demand to render the S-400s inoperable, confronting Erdogan with a difficult choice.

The shock of Idlib could be an opportunity for Turkey to mend fences with its NATO allies.

The recent events in Idlib could be an opportunity for Turkey to mend fences with its NATO allies, or the divide could widen further. Still, Turkey does not seem likely to break its ties with Russia. Russia may not yet be a major arms supplier for Turkey, and the two countries find themselves on different sides in other conflicts, such as in Libya, but cooperation between the two countries reflects both capitals' desire to reposition themselves in a changing global order and extends to strategic industries, from gas pipelines to nuclear power, that create mutual dependencies.

What is likely to be the result of Turkey’s decision to open its borders with Europe for Syrian refugees to leave?

As Syrians fleeing Idlib mass along the closed Turkish border, a senior Turkish official, Ömer Çelik, said on 28 February that Ankara is “no longer in the position to stop refugees”. An unnamed Turkish official announced on the night of 27 February that Turkey had opened its sea and land borders with the EU to refugees. Most observers see these statements as a threat aimed at prompting EU member states to increase their financial pledges to Turkey in support of the refugees already living there, and to step up support for efforts to care for the displaced in Idlib. The EU has already disbursed over 3 billion euros to help Syrian refugees in the country, of the total 6 billion that it had promised Turkey in 2016. Turkey has requested a third tranche, and is seeking other aid as well.

Ankara has long warned the EU that unless it provides support for reconstruction in areas that Turkey controls in Syria, as well as a no-fly zone in those areas, it cannot rely on Turkey to impede movement of refugees onward to Europe.

What can local and outside actors do to contain the escalation?

The UN and others have called for an immediate ceasefire in Idlib, but three rounds of talks between Ankara and Moscow so far have failed to reach an agreement in recent months.

Russia and Turkey should improve their deconfliction channels.

The impasse stems from divergent expectations. Turkey wants Syrian regime forces to withdraw to the lines demarcated in the 2018 Sochi Agreement. It also wants the militants in Idlib to stay on the Syrian side of the border. In contrast, the regime (and Russia) want to clear the area of rebels and, ultimately, to reinstate control over the entire province.

Russia and Turkey should improve their deconfliction channels, and all relevant parties should accept an immediate ceasefire that includes all rebel groups operating in Idlib, including HTS. Turkey and Russia could also take steps to open Idlib’s major highways, as required by the Sochi memorandum, including having their own forces secure the roads.

As for the EU and its member states, it would be wise to increase its financial and humanitarian support for Turkey, seizing this chance to reassure Turkey about its place in the transatlantic alliance.