The bloom is off two years of hope that the rule of law can be restored for all and that a 60-year failure to grant Tamils a fair share of power, in the Sinhala majority island, can be rectified.

In January 2015, the shock electoral defeat of President Mahinda Rajapaksa by his former ally, Maithripala Sirisena, rescued Sri Lanka from a slide into increasingly harsh nationalist authoritarianism. The victory of a broad coalition representing Sinhalese, Tamils, and Muslims gave hope that the country could begin to address its longstanding political challenges: remedying the 60-year failure to grant Tamils a fair share of power in the Sinhala majority island and restoring for all the rule of law, damaged by decades of politicization, bitter ethnic bias, and impunity for grave abuses committed during the civil war with the Tamil Tigers.

The momentum of the early months soon slowed, as deep political dysfunctions reasserted themselves in the face of reforms meant to shake up entrenched political practices and policies. Two years on, the bloom is off. Time is running out for any reform at all. Government leaders should remember how easily they were sidelined when Rajapaksa’s triumphalist majoritarian politics held sway. For their own survival and to deliver on at least some of their big promises, they must collectively reject narrow chauvinistic politics and daily bickering and invest their remaining political capital in promoting an inclusive vision to build a more accountable political order and mitigate the risk of future conflict.

Sirisena’s first nine months as president saw real progress. With his electoral coalition, anchored around the United National Party (UNP), strengthened by the support of a large section of his – and Rajapaksa’s – Sri Lanka Freedom Party (SLFP), he won the needed two-thirds parliamentary approval for a key electoral pledge: a constitutional amendment to reduce the presidency’s enormous powers and restore the independence of oversight commissions for the police, judiciary, and human rights. The government ended censorship and intimidation of the media and partially scaled back the heavy military presence in Tamil-majority areas in the north and east of the island. The military was convinced, reluctantly, to return some of the huge swathes of private land it had seized during and after the war.

Sirisena’s election was followed in August 2015 by the narrow victory of a UNP-led coalition over a grouping led by former President Rajapaksa and including much of the new president’s Sirisena’s own SLFP. This allowed Sirisena to reassert enough control over the fractured SLFP to convince the majority of the parliamentary group to form an unprecedented national unity government with its long-time rival UNP, headed by Prime Minister Ranil Wickremesinghe. The grand coalition reaffirmed the parties’ ambitious agenda to revive the beleaguered economy, investigate alleged corruption and political murders under the previous regime, promote reconciliation and, most important, draft a new constitution. Key aims of constitutional change were to check centralization of power in presidential hands, adopt a new electoral system and expand the powers devolved to provinces to address Tamils’ long-standing demands for autonomy in the north and east.

Read the full text at The Diplomat Magazine

Impunity and Justice: Why the UN Human Rights Council Must Stay Engaged in Sri Lanka 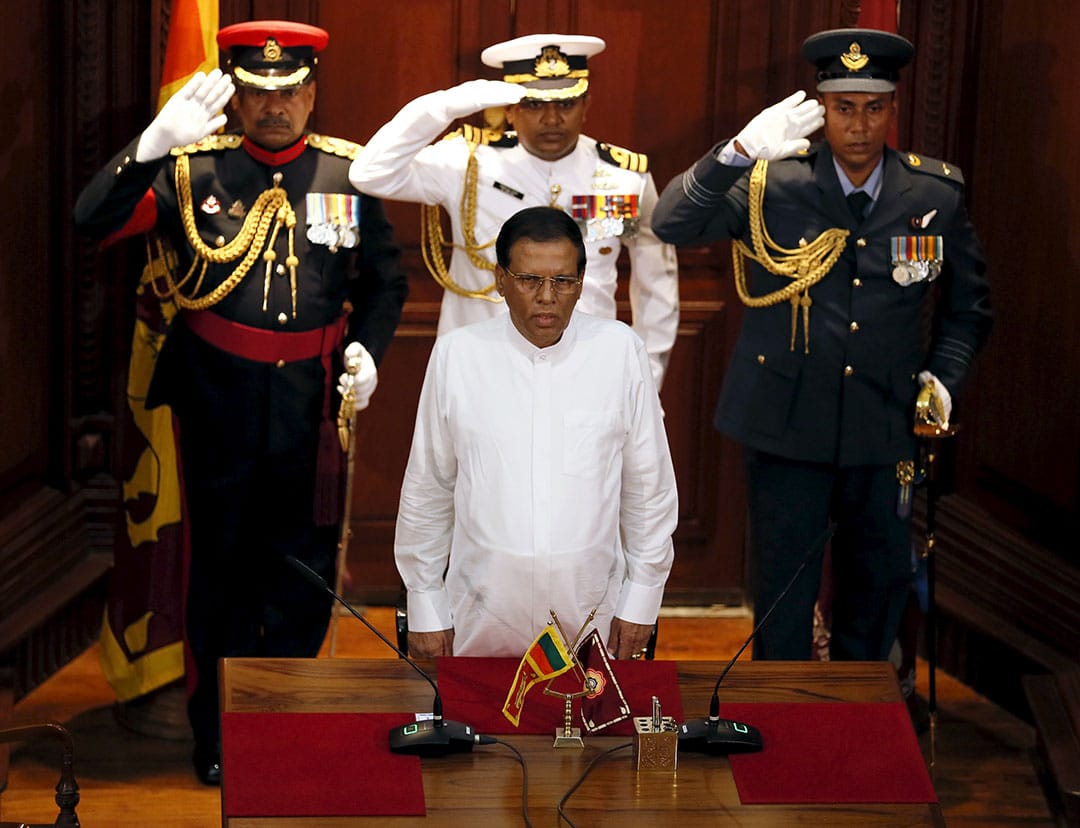 Seven years after its civil war ended, Sri Lanka’s democratic space has reopened but strains are building from a powerful opposition, institutional overlaps and a weakened economy. To make reforms a real success, the prime minister and president should cooperate with openness and redouble efforts to tackle legacies of war like impunity, Tamil detainees and military-occupied land.

The unexpected chance for lasting peace and reconciliation in Sri Lanka that followed President Maithripala Sirisena’s January 2015 election faces increasing turbulence. Initial moves by Sirisena’s government halted and began to reverse the slide into authoritarianism and family rule under Mahinda Rajapaksa. Its reform agenda is ambitious: restoring the rule-of-law and ending impunity for corruption and abuse of power; a new constitution; a complex package of post-war reconciliation and justice mechanisms agreed with the UN Human Rights Council (UNHRC); and major policy changes to jump-start a beleaguered economy. Progress, however, has been slower than key constituencies expected and lacks the coherence and resources needed to sustain it. The “national unity” government expanded the political centre and isolated hard-line nationalists, but the window for change has begun to close. Seizing Sri Lanka’s unprecedented opportunity for reform requires bolder and better coordinated policies, backed by a public relations campaign to restore sagging popular support.

The stuttering progress strains ties between the government and the constituencies that brought it to power. Tamils in the north and east voted overwhelmingly for Sirisena but are increasingly doubtful he will fulfil his reconciliation and justice promises. Many Sinhala “good governance” activists criticise the failure to follow through on rule-of-law measures, continued cases of alleged nepotism and corruption and what they consider the lethargic pursuit of corruption and criminal investigations. As the budget deficit grows and currency reserves dwindle, belt-tightening has been blocked or scaled back due to protests. At the same time, strains are growing between Sirisena’s Sri Lanka Freedom Party (SLFP) and the United National Party (UNP) of Prime Minister Ranil Wickremesinghe. The small window for threading the political needles essential for reforms is shrinking.

Institutional factors hamper progress: too few staff and too little expertise, particularly on reconciliation and transitional justice issues, multiple power centres and unwieldy, often overlapping ministries, and the different priorities and governance styles of president and prime minister. Governance reforms are slowed by need to work through bureaucrats and politicians implicated in past abuses, some of whom were given cabinet posts to help the government achieve the two-thirds parliamentary majority needed to approve a new constitution.

Boldness is limited by Sirisena’s struggle to counter the faction loyal to ex-President Rajapaksa within his SLFP, especially in upcoming local elections. Reacting defensively to Sinhala nationalists’ attacks against Sirisena’s relatively modest reconciliation gestures and proposed constitutional reform and scared of giving opponents ammunition or angering the military and security services, the government has returned only a small portion of military-occupied land and released few Tamil detainees.

Seven years after the end of the civil war in May 2009, issues of reconciliation and accountability remain largely unaddressed. The government appears to be backtracking on transitional justice plans, particularly the role of foreign judges and experts. The enormity of the crimes, especially in the final weeks of the war, makes them impossible to ignore but hard for the military and most Sinhalese to acknowledge or accept responsibility for. Mechanisms promised to the UNHRC feed Sinhala nationalist suspicions, while attempts to reassure Sinhalese and the military encourage doubts among Tamils about government willingness to pursue justice for wartime atrocities or back constitutional changes that satisfy legitimate Tamil aspirations for meaningful autonomy.

To hold its coalition together and meet UNHRC obligations, the government must sequence reforms carefully, speeding progress on some fronts to rebuild public confidence, while committing resources to build support and institutional capacity for deeper and harder steps, particularly making progress on the critically important special court for prosecuting war crimes. Better communication and cooperation between president and prime minister, more transparent policymaking and clearer lines of authority are essential.

To rebuild confidence among Tamil communities in the north and east, the government must quickly release detainees and military-occupied land, begin credible inquiries into the fate of the disappeared, investigate and end abuses and repeal the Prevention of Terrorism Act (PTA). For these and other reforms to be sustainable, the president and prime minister will have to assert authority over the military and national security apparatus, including by developing a credible security sector reform plan. If they are serious about constitutional changes that will contribute to a lasting solution to the ethnic conflict, Sirisena and key ministers must make a much stronger public case for greater devolution of power.

Ending impunity and restoring rule-of-law are concern to the whole country, as seen in the popularity of good governance and anti-corruption citizen movements in the Sinhala south. To resonate more broadly with all ethnic groups and regions, measures for addressing the war’s legacy should be presented by the government and civil society as an integral part of the rule-of-law and good governance agenda. Moves to prosecute key cases of corruption and political killing under the Rajapaksa regime need to be backed by a sustained public relations campaign that articulates a broad vision of a reformed state, the links between the various initiatives and the benefits they bring all communities.

As longstanding dysfunctional political dynamics reassert themselves, the government’s ability to distinguish itself from the Rajapaksa era, which is essential to its political survival, has begun to fade. If ethnic and religious chauvinists in all communities are not to grow stronger and belief in democratic reform that Sirisena’s election reflected and encouraged is to be rekindled, the government must make a concerted push to jump-start the flagging reform process.

To strengthen rule-of-law and democratic governance

To address the complex demands of transitional justice processes