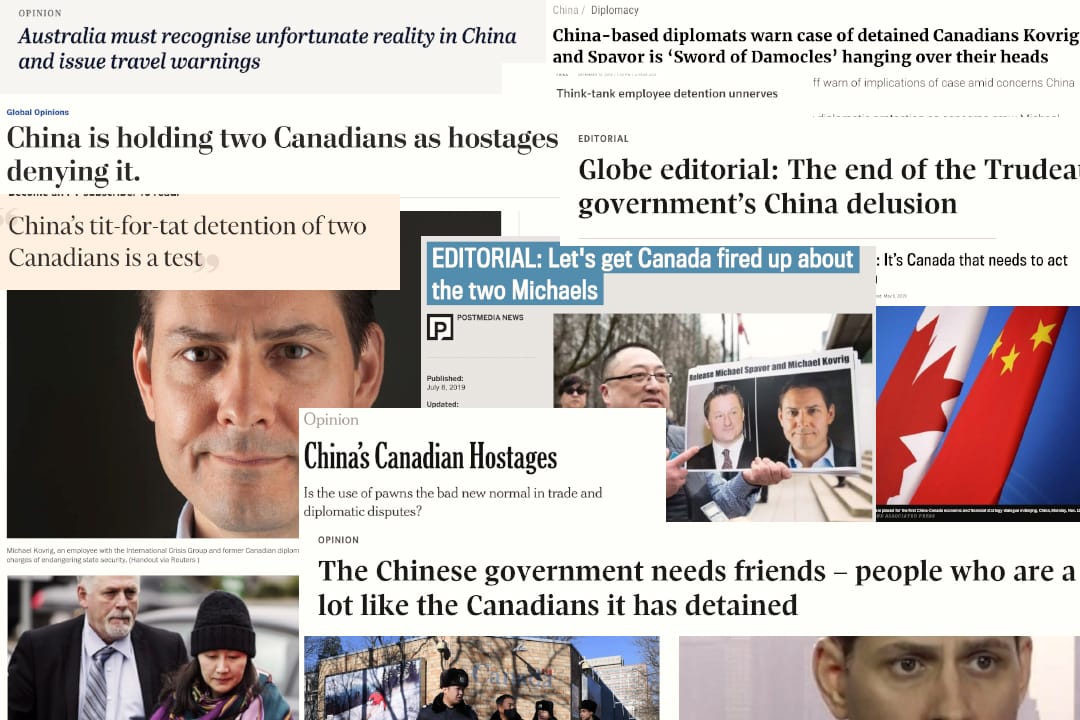 From the moment Chinese security officers seized our colleague Michael Kovrig from a Beijing street on 10 December 2018, holding him prisoner for more than one year since then, there has been a swelling tide of support for calls to free him from fellow China specialists, citizen action groups, academics, scholars and many nations from the Baltics, to the EU, to Canada and to the U.S.

There have also been dozens of newspaper editorials and hundreds of news reports, from media outlets all over Canada through Asia and on the opinion pages of major European and North American newspapers.

Canadian citizens being detained by China appear to have become pawns in a political impasse.

“China, already an aggressive rising power known to flout the rule of law and disregard human rights, now seems to be using hostage-taking to resolve economic and diplomatic dispute”, said an editorial in the New York Times, referring to the detention of Kovrig and another Canadian, Michael Spavor. “Canadian citizens being detained by China appear to have become pawns in a political impasse”.

Canada’s Globe and Mail said the detention was a kind of watershed. “The crisis has dispelled a lot of illusions on both sides of the Pacific. It’s never pleasant to discover the gap between one’s wishes and objective reality, but it is the beginning of the path to wisdom”, it said in an editorial. “By essentially kidnapping two Canadians, the hard men of Beijing have shown their true faces”.

An opinion piece in The Washington Post said the fallout was quickly spreading beyond the official domain. “People in the international NGO, business, academic and diplomatic communities who deal with China should pay attention”, wrote law professor Donald Clark. “What Kovrig did there was exactly what huge numbers of other people in those communities do in China: He went around and talked to people. … Now we know that these activities can be instantly made the basis for serious criminal charges against anyone whose government offends China”.

“You cannot just go around arresting innocent people and holding them hostage. That is the mark of a thuggish state, not a permanent member of the Security Council”, Clark added. “If you want respect, act respectably”.

You cannot just go around arresting innocent people and holding them hostage.

In Canada, the Ontario newspaper London Free Press said Ottawa was the victim of a U.S. spat with Chinese technology giant Huawei – Kovrig was detained days after Canada implemented a U.S. arrest order against Huawei’s Chief Financial Officer, Meng Wanzhou – and demanded that Canada find ways to retaliate as China began taking action against Canadian canola and other exports.

“We can announce a Huawei ban from our 5G grid sooner than later, we can expel their Ambassador for his labelling Canadians ‘white supremacists’ and we can ban state-owned enterprises from purchasing Canadian companies. [Withdrawing] our funds from China’s development bank [is another of the] ideas worth considering”, the London Free Press said in an editorial.

Many commentaries noted the intangible costs of jailing Kovrig, who is “a well-respected and well-connected analyst; a thoughtful and nuanced observer who engaged with senior Chinese officials and attempted to explain Chinese views to the international community”, noted an editorial in the UK’s Guardian.

“The case … reminds us that the rise of a brash authoritarian power comes with profoundly human consequences”, said Hal Brands in Bloomberg Opinion. “China risks alienating those foreign observers who have worked hardest to build connections and understanding between Beijing and the outside world … making foreign CEOs wonder whether they or their employees should take the risk of traveling there”.

Beijing is jeopardising its own standing in the world.

Canadian business leader and philanthropist Frank Giustra added in the Globe and Mail that “the unjustified detention of my countrymen hurts China’s global stature and sends a destructive signal to everyone who wants to build bridges … China needs to embrace friends such as Michael – not put them in jail”.

In an editorial, the Washington Post pointed out the stark contrast between the treatment of Meng Wanzhou and Michael Kovrig’s incarceration. “Released on bail, she has been living in one of the two large mansions she owns in Vancouver while awaiting her extradition hearing. In contrast, Mr. Kovrig is isolated in a Beijing prison where he is denied access to lawyers and his family. The New York Times reported that he had been interrogated continuously and was not allowed to turn the light off in his cell at night”.

Reuters reported that Kovrig’s detention had spread a new chill through the NGO community in China, and the South China Morning Post said that even diplomats felt nervous. The Sydney Morning Herald said that “Australia and its partners should all agree to raise travel warnings for China as the risk of arbitrary detention is now unacceptably high. China’s leadership is making the country unsafe for many. It’s time that Australia publicly recognised this unfortunate reality and issued a former travel warning”.

“While China may not have picked this fight with the US, how it responds will help shape the way the world views it at a critical time”, wrote Mark Malloch-Brown in the Financial Times. “Beijing is jeopardising its own standing in the world”.

Video - Michael Kovrig, one year in detention in China