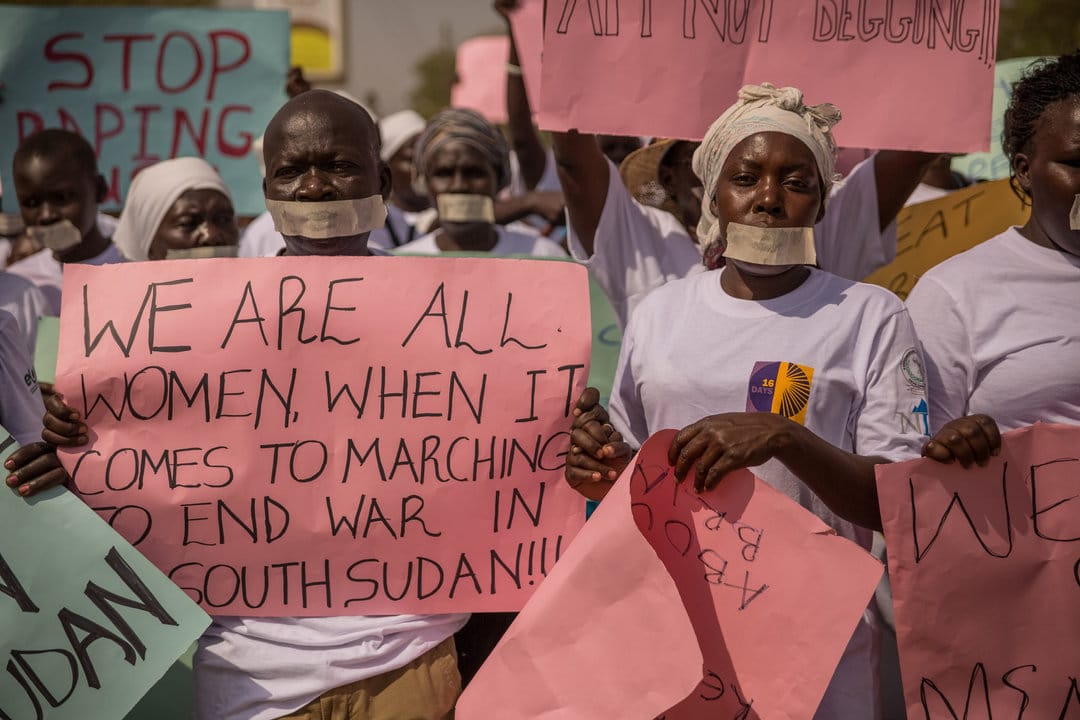 South Sudanese women march to end war on 9 December 2017. Women and religious groups are among the only groups still allowed to publicly protest and march in South Sudan. AFP/Stefanie Glinski
Commentary / Global 07 March 2018

The impact of conflict is rarely seen through the prism of reproductive health. Yet women and girls routinely face sexual and gender-based violence during war and its aftermath, maternal mortality is endemic in conflict-affected areas and amplifying women’s voices is critical to removing risks to their well-being.

A few years ago, a woman in her sixties outside Banda Aceh in Indonesia told me about the rape and other torture she had endured during the conflict between the Free Aceh Movement and the government. Beyond the psychological trauma, her body still suffered from enduring physical pain. Many years on, while the open conflict had ended, she still had not received comprehensive health care and support. Instead, like too many survivors of physical and sexual violence, she was left in a vicious circle of isolation, carrying the burden of stigma and shame.

In war and its immediate aftermath, it is easy to forget those who are voiceless or invisible in the public space. Yet, countless reports show that time and again women and adolescent girls are at higher risk of sexual and gender-based violence during and after conflict – putting at risk their reproductive health. With health infrastructure destroyed and information about sexual and reproductive health missing, they may also face a higher risk of dying due to pregnancy-related complications.

Over half of the world’s maternal deaths occur in countries torn apart by armed violence.

Maternal death, when a woman dies during pregnancy or in the weeks after, and maternal morbidity, long-lasting health problems during and after pregnancy, rarely feature when we speak about the effects of deadly conflict. Yet, the number of women and girls dying during pregnancy or childbirth is often high in conflict-affected areas, while many suffer from chronic illnesses.

Over half of the world’s maternal deaths occur in countries torn apart by armed violence and in fragile states. According to recent estimates, four out of the ten countries with the highest rates of maternal mortality face deadly conflict: the Central African Republic, Nigeria, South Sudan, and Somalia. Two are at risk of deadly violence or civil war: the Democratic Republic of Congo and Burundi. And three others have been marked by devastating wars: Sierra Leone, Chad and Liberia. In Afghanistan, despite years of international aid, the maternal mortality ratio is still at 396 deaths per 100,000 live births or, according to recent studies, possibly twice as high. Each context carries its own dynamics with a set of social, cultural and economic factors at play. Yet, like battlefield deaths, maternal deaths are for the most part preventable.

Conflict can exacerbate pre-existing patterns of gender discrimination and inequality.

In ways that can be easy to overlook, conflict can exacerbate pre-existing patterns of gender discrimination and inequality, leaving women and girls with few survival options. In the face of extreme hardship, some are forced to marry young, which carries higher health risks, while others may choose to turn to transactional sex, leaving them highly vulnerable to trafficking, sexually transmitted infections, and unintended pregnancies. Shortly after the conflict has ended, women and girls also tend to experience higher levels of gender-based and intimate partner violence, which further increase threats to their sexual and reproductive health.

Instead of bringing women into the decision-making space, the end of violent conflict can see women – whether they are combatants, survivors, or economic providers – sidelined and blocked from accessing sexual and reproductive health reparations.

With the growing number of conflicts around the world, more and more women find themselves trapped in camps for displaced people, where health services – when they exist – are often delayed or disrupted, with limited or infrequent supplies of vital medicines and food. As Crisis Group’s report on Women and the Boko Haram Insurgency in Nigeria illustrated, access to even some of the most basic health services can be dramatically limited. We have called, among other measures, for an expansion and improvement of gender-sensitive aspects of aid programs in all Boko Haram-affected areas.

For women living in conflict-affected environments, childbirth can be a particularly dangerous and traumatic experience. Many have to give birth unassisted and in unsanitary conditions, increasing the likelihood of trauma, long-lasting physical illness, and death. In South Sudan, a country devastated by years of war, at least one woman in 28 is likely to die from a pregnancy-related cause. In fragile and conflict-affected environments, where only 65 per cent of births are attended by skilled health professionals, unassisted birth remains one of the main drivers of maternal mortality. Unable to access safe abortion services, many women also resort to unsafe and potentially life-threatening methods to terminate their pregnancies.

We must recognise the challenge of preventable maternal deaths in conflict-affected areas, and provide adequate sexual and reproductive health information and services to women and girls of all ages.

In the past twenty years, governments, humanitarian actors, and members of the civil society have made tremendous progress in mainstreaming reproductive health into humanitarian responses and legal frameworks. Despite these advances, many gaps remain.

To continue making progress, we must recognise the challenge of preventable maternal deaths in conflict-affected areas, and provide adequate sexual and reproductive health information and services to women and girls of all ages. Governments must plan responses to conflict carefully to provide greater say to women. Neglecting these issues can fuel new abuses or prolong pain in Aceh, Nigeria and other conflict-affected societies.

Sri Lanka’s Conflict-Affected Women: Dealing with the Legacy of War

A New Network of African Women Mediators for Peace