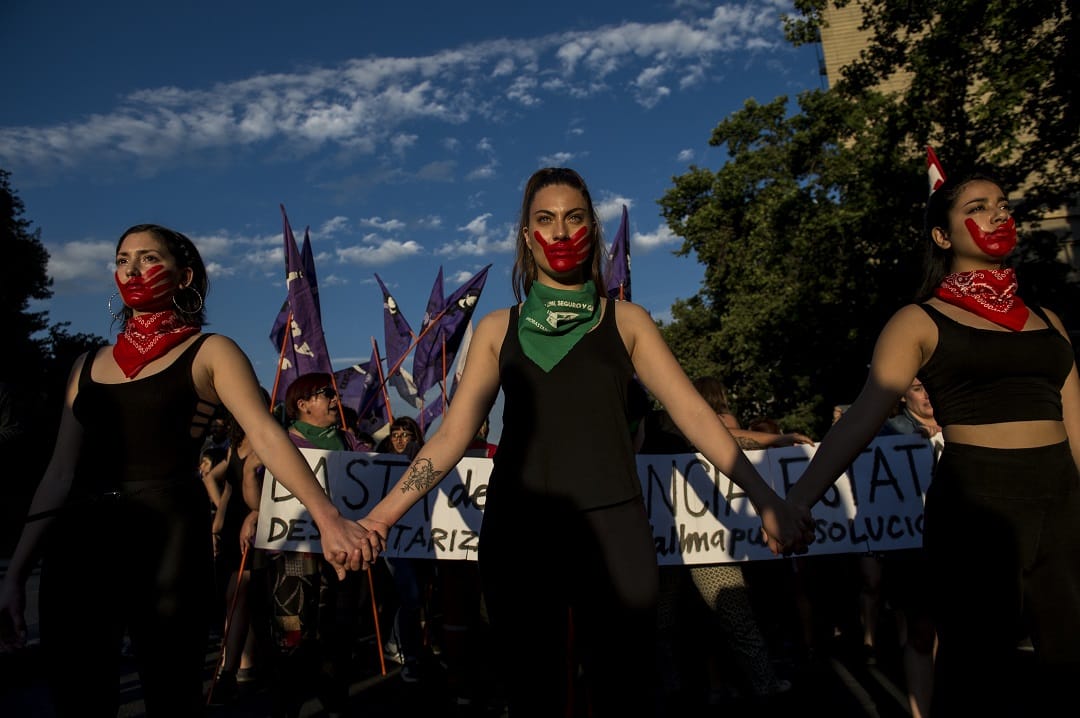 Activists take part in a march on the eve of the commemoration of the International Day for the Elimination of Violence Against Women, in Santiago, on 22 November 2018. Martin BERNETTI / AFP
Commentary / Gender and Conflict 06 March 2019

Women human rights defenders around the globe are facing heightened threats of violence and repression. Sometimes they are targeted for being activists, and sometimes just for being women. World leaders should do much more to secure space for women’s safe participation in public life.

In early January 2019, unknown gunmen shot dead Maritza Isabel Quiroz Leiva, a 60-year-old Colombian land rights activist on a small farm near the Caribbean city of Santa Marta. Her killing was a stark reminder that speaking out on social and political issues in Colombia – whether land disputes, women’s rights, or the political violence that endures despite the 2016 peace agreement between the government and the Revolutionary Armed Forces of Colombia (FARC) guerrilla movement – is dangerous business. For Maritza’s death is not an isolated incident: in the last three years, guerrillas (FARC remnants and others), criminals and mystery assailants have killed more than 300 activists (both men and women) like her.

Nor is Colombia the only country in its neighbourhood where violence against all human rights defenders is putting prominent women activists at risk of physical attack and other abuse. In 2018, our global conflict tracker CrisisWatch recorded several such murders elsewhere in Latin America – including that of Guatemalan indigenous activist Juana Raymundo in July and that of Colombian women’s rights activist Maria Caicedo Muñoz in October.

Women who are in the public eye as they challenge established norms and take on powerful interests, from governments to insurgencies to criminal gangs, are prominent targets; and women leaders representing neglected constituencies – such as the poor, ethnic and sexual minorities, displaced persons or migrants – are also preyed upon. The murder in March of Brazilian Marielle Franco, a Rio de Janeiro city council member, is a case in point. In addition to being a campaigner against corruption and police brutality, Franco was a powerful advocate for black women, the LGBT community and youth. The investigation has moved slowly.

In addition to the risk of attack that all activists face, women activists are vulnerable to gender-specific abuse.

From a global perspective, UN Special Rapporteur on the situation of human rights defenders Michel Forst highlighted in a 2019 report that in the current political climate – where there has been both a backlash against human rights around the world and a rise in misogynistic rhetoric among political leaders – human rights defenders who are women “have been facing increased repression and violence across the globe”. The report suggests that these women are sometimes targeted for the causes they promote, and sometimes simply because they are women who are publicly asserting themselves.

Moreover, in addition to the risk of attack that all activists face, women activists are vulnerable to gender-specific abuse – which can include stigmatisation, public shaming (as a perceived way to damage their “honour”), threats of sexual violence, online harassment and killings. In April 2018, individuals seeking to undermine and intimidate Indian investigative journalist Rana Ayyub threatened her with sexual violence on social media and used a fake pornographic video to tarnish her reputation. In June, unknown individuals ransacked the home of journalist and activist Marvi Sirmed, who has done much to highlight the central role of women’s rights and the rule of law in Pakistan’s political transition. In July, an unknown man attacked with sulfuric acid anti-corruption campaigner Kateryna Handzyuk in Kherson, Ukraine; with burns over more than 30 per cent of her body, she died from her wounds in November. And in September, masked attackers opened fire on Soad al-Ali, a leading human rights activist and mother of four in her mid-forties, in broad daylight in the southern Iraqi city of Basra. During roughly the same period, three other influential Iraqi women, including social media leader Tara Fares, were killed, or found dead in suspicious circumstances, at other locations.

World leaders should speak out more forcefully about the critical importance of women’s participation in political life.

One concern about the threat of violence or attack on women activists is that it not only affects their safety, but could chill their participation in public life, where women are already under-represented. Globally, only a quarter of parliamentarians are women, and nearly all heads of state or government leaders are men. This is not to say that addressing risks of political violence will by itself increase women’s representation in politics, as there are many possible reasons for the low numbers on women’s political participation worldwide. Nor does progress in this regard necessarily correlate with lesser danger to women. (Latin America, which has some of the highest rates of violence against human rights defenders in the world, boasts a vibrant women’s rights movement, and several of its parliaments have relatively high levels of female representation.) But making it safer for women to participate in public life can only help. States and their leaders should use the tools at their disposal – from good laws to strong enforcement to hold those responsible for abuse to account, to ensuring that security forces are attuned to the protection needs of women – to combat violence against women activists.

Protecting women’s space in politics is especially important in the conflict resolution area. Despite women’s longstanding role in informal dispute resolution, their near absence from peace talks and similar international security processes and mechanisms, as in Yemen or Afghanistan, requires particular attention. Sidelining conflict-affected women – or women representing those with perceived low status in society due to their socio-economic status, age, education, ethnicity or religion – is no way to build inclusive and lasting frameworks for peace.

As we celebrate International Women’s Day on 8 March, world leaders should speak out more forcefully about the critical importance of women’s participation in political life. They should take more measures to prevent and condemn verbal and physical attacks on women human rights defenders or political leaders and their families. They should also carve out greater and safer space for civil society, including women’s groups, to enable them to have a say in government policies affecting their lives.

The implications of violence against women activists and politicians are broad, not just for families, but also for the well-being of societies at large. Failure to protect women like Maritza Isabel Quiroz Leiva and Marielle Franco sends a terrible signal to women and girls wanting to raise their voice in the public square. Chilling their participation in public life would be a tragedy not just for the women whose potential is being squandered but for the communities in which they live.