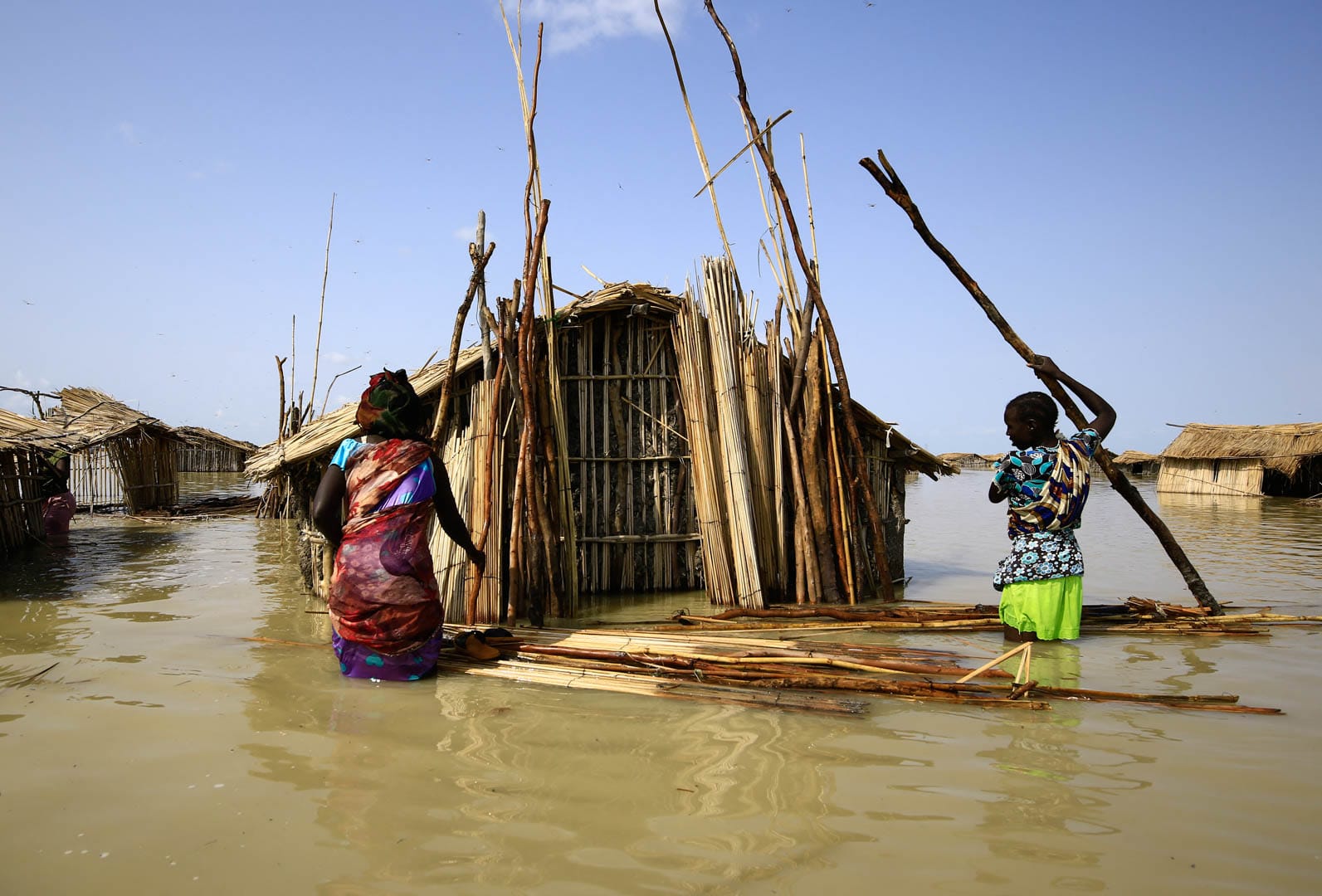 South Sudanese refugees try to repair their hut in flooded waters from the White Nile at a refugee camp which was inundated after heavy rain near in al-Qanaa in southern Sudan, on 14 September 2021. ASHRAF SHAZLY / AFP
Statement / Global 07 December 2021

Time for the UN Security Council to Act on Climate Security

A draft UN Security Council resolution would increase the United Nations’ attention to the effects of climate change on war and peace. Member states should back this initiative – notwithstanding a possible veto – to encourage odds of passage and promote international discussion of this vital subject.

The UN Security Council is set to vote on a resolution calling for stepped up international efforts to understand and respond to the implications of climate change for peace and security. Ireland and Niger, two elected members of the body, put the draft “in blue” – meaning the text is in near-final form – late on 6 December. On 9 December, Nigerien President Mohamed Bazoum will preside over a Council session on climate change and terrorism. A vote on the draft resolution could come as soon as 10 December, or early next week. China and Russia are not supportive, and either could decide to veto. But there is still time for the UN membership to put their weight behind this initiative, creating better odds for its passage, and thereby spur more UN attention to climate security.

The draft resolution includes a series of proposals to make the UN’s analysis of climate security more systematic. It calls on UN Secretary-General António Guterres to deliver a report on the security implications of climate change for the regions and countries on the Council’s agenda by December 2023. It also asks UN peacekeeping and political missions to pay more attention to climate-related risks in their areas of operation.

These suggestions build in part on existing UN practices. The Council has previously expressed concern about the implications of climate-related issues, such as land degradation and desertification, for peace and security in places such as the Sahel. But the Council’s handling of these matters to date has been ad hoc, and the UN’s resources for addressing climate security remain limited. Most UN field operations have no climate security expert to help them analyse threats arising from the loss of land or extreme weather events. (The sole exception is Somalia, where the mission has charged an official with monitoring such matters.) The draft resolution urges Guterres to improve training and guidance for UN staff on risks related to climate security.

The resolution could initiate a much greater focus within the UN system on the security implications of climate change.

More broadly, the resolution could initiate a much greater focus within the UN system on the security implications of climate change, just as Security Council Resolution 1325 of 2000 on Women, Peace and Security spurred discussions of gender and conflict that continue to this day. For example, the Irish-Nigerien draft text encourages governments and scientists to pool data on climate-security issues. It also envisages the creation of new online platforms that could provide “real-time” information on climate patterns, such as droughts, that could fuel conflicts.

At present, there is no forum within the UN system that has claimed a clear mandate to look at climate security issues. The parties to the UN Framework Convention on Climate Change (UNFCCC) have not addressed the link between climate and conflict at their annual conferences to date. For example, climate security was not part of the formal agenda at the November Glasgow summit on climate change, although Germany did organise a side event on the theme. (Berlin can also take credit for urging a greater focus on climate matters during its term on the Security Council in 2019-2020, which laid the groundwork for Ireland and Niger’s push.)

But while there is some justification for officials dealing with the environmental and economic consequences of global warming in the UNFCCC framework to be wary of taking on security issues, the Security Council is a different story. There is now solid evidence that climate change can contribute to conflict, placing the issue squarely in the Council’s wheelhouse. The degradation of agricultural land resulting from climate change has contributed to inter-ethnic violence in West Africa. Flooding has created mass displacement in South Sudan, inflaming pre-existing intercommunal tensions. Intense, prolonged drought in the eastern parts of the Horn of Africa threatens to increase food insecurity and exacerbate the worsening humanitarian situation in the region, where conflict and political instability are on the rise. In recent years, the Council has discussed other climate-related tensions, ranging from the dangers of sea-level rise for small island states to tensions among Ethiopia, Egypt and Sudan over the use of Nile waters during future droughts.

True, the linkages between climate change and conflict are often complicated. Other political, economic and social factors are always in play and will affect the ways in which climate-induced stresses can lead to violence. As Crisis Group has previously noted, some efforts to help communities adapt to the effects of climate change, such as land reforms, can actually exacerbate conflict rather than avert it.

But it is precisely because climate dangers are so complex that it will be useful for the Security Council to act as a focal point for detailed discussion of conflict risks and potential responses, bringing together climate scientists with experts on political violence, humanitarian issues and development to share ideas. The draft resolution’s call for the UN secretary-general to produce a report on the issue creates an opportunity for such a process and could create a model for future reporting on these risks.

While twelve of the fifteen Security Council members – including the UK, France and the U.S. – support the resolution, three have expressed opposition to it. These include China and Russia, which could veto the text, and India, which cannot but carries weight in climate-related discussions as a major developing economy and influential player in UNFCCC debates. In identical letters addressed to Ireland and Niger last week, the three sceptics argued that there is “no clear scientific background for equating climate change with security concerns”. They also warned that the Council risks trespassing on the UNFCCC’s prerogatives as the main UN forum for discussing climate change. Noting that decisions at the UNFCCC are taken by consensus (ie, requiring the support of all its 197 members), China, Russia and India argue that the Security Council resolution would sidestep this principle. They warn that it would allow a small group of states to set the agenda on a dimension of climate policy and sow “the seeds of discord among the wider UN membership”.

[China, Russia and India have] argued that climate change is a development issue outside the Security Council’s purview.

Previously, these powers also argued that climate change is a development issue outside the Security Council’s purview, and Russia has suggested that the separate UN Economic and Social Council discuss the issue instead.

Still, it is not clear whether either China or Russia will actually use its veto to block this resolution, or whether they will simply abstain and let it pass. Council members have warned their Chinese counterparts that they risk damaging Beijing’s claims to be a leader in fighting global warming if they block such a popular measure. Russia, which has invested less political capital in climate diplomacy and generally is less restrained with respect to its veto, seems more likely to block the resolution. Yet it might let it pass if Moscow sees that Beijing is willing to let the initiative proceed. In an effort to raise the reputational costs of obstructing the resolution, Ireland and Niger can invite other UN members to act as co-sponsors. States outside the Council can sign on – a recent resolution on the protection of education in conflict, tabled by Niger and Norway, had 99 co-sponsors.

Even if the resolution fails, it will be possible for concerned Council members to continue to insert references to climate security into the mandates of individual UN operations, as they have done in the past. But the resolution’s failure could also undo some of the progress made on mainstreaming climate security issues at the Council. India has opposed climate-specific language on at least two region-specific resolutions since discussions of the Irish-Nigerien text ramped up in the autumn. Some members fear a rancorous vote culminating in a veto could poison further discussions on crises where the Council has already acknowledged the impact of climate on conflict.

These concerns may be overstated. Chinese and Russian diplomats have reportedly recognised in some private conversations on the resolution that climate change may increase security risks on a case-by-case basis, even if they dislike framing this in more general terms. The permanent members of the Council often pick battles over thematic resolutions – as China and the U.S. did over a text on COVID and conflict last year – before returning to more pragmatic cooperation over specific country resolutions.  Council members should not worry too much about short-term ill temper over the current draft resolution.

To the contrary, the states that back the resolution would be well served by throwing their weight behind its passage. This resolution has the potential to both put the UN’s engagement on climate-related risks on a sounder footing and stimulate international debate about these threats to peace and security. UN members who believe this debate is necessary should co-sponsor the draft resolution. If it passes, they should ensure that the UN secretary-general has the resources to lead an in-depth study of the problem that shapes future policy responses to climate change as a source of international instability.