Two years have passed since U.S. President Donald Trump and North Korean leader Kim Jong Un’s historic Singapore summit. But nuclear diplomacy remains stuck and the 2018 June Singapore Joint Statement has not been implemented. The coronavirus pandemic and U.S. presidential elections in November might convince both capitals to kick the can down the road until next year, at the earliest. But Pyongyang’s nuclear weapons capability continues to advance without restrictions.

Please join us for a live, online conversation with former chief envoys from the U.S. and South Korea who negotiated the 1994 Agreed Framework, the 2005 and 2007 Six Party Talks agreements, and the 2012 Leap Day deal with North Korea during the Clinton, Roh, Bush, and Obama administrations for a look back and their advice on next steps towards denuclearization, peace, and regional stability.

Audience questions will be taken. You may join via Web browser without installing the software for any security concerns. Or, watch the post-event recording found here.

Amb. Robert L. Gallucci is Distinguished Professor of the Practice of Diplomacy at Georgetown University who negotiated the 1994 Agreed Framework as chief U.S. envoy during the Clinton administration, and also served as Ambassador-at-Large, Assistant Secretary of State for Political Military Affairs, and Deputy Executive Chairman of the UN Special Commission overseeing the disarmament of Iraq in his 20-year diplomatic career.

Amb. Chun Yung-woo is Founder and Chairman of the Korean Peninsula Future Forum who negotiated two of the three Six Party Talks agreements as chief South Korean envoy from 2006 to 2008 during the Roh administration, and completed his 33-year diplomatic career as the National Security Advisor to President Lee Myung-bak.

Amb. Christopher R. Hill is the Chief Global Advisor and Professor of the Practice in Diplomacy at the University of Denver who negotiated all three of the Six Party Talks agreements with North Korea as chief U.S. envoy from 2005 to 2009 during the Bush administration, and also served as U.S. Ambassador to South Korea and Assistant Secretary of State for East Asia and Pacific Affairs in his 33-year diplomatic career.

Amb. Glyn T. Davies negotiated the 2012 Leap Day deal with North Korea as chief U.S. envoy during the Obama administration, and also served as U.S. Permanent Representative to the IAEA and Ambassador to Thailand in his 38-year diplomatic career.

Duyeon Kim (moderator) is Senior Advisor for Northeast Asia and Nuclear Policy at the International Crisis Group and a Columnist at the Bulletin of the Atomic Scientists. 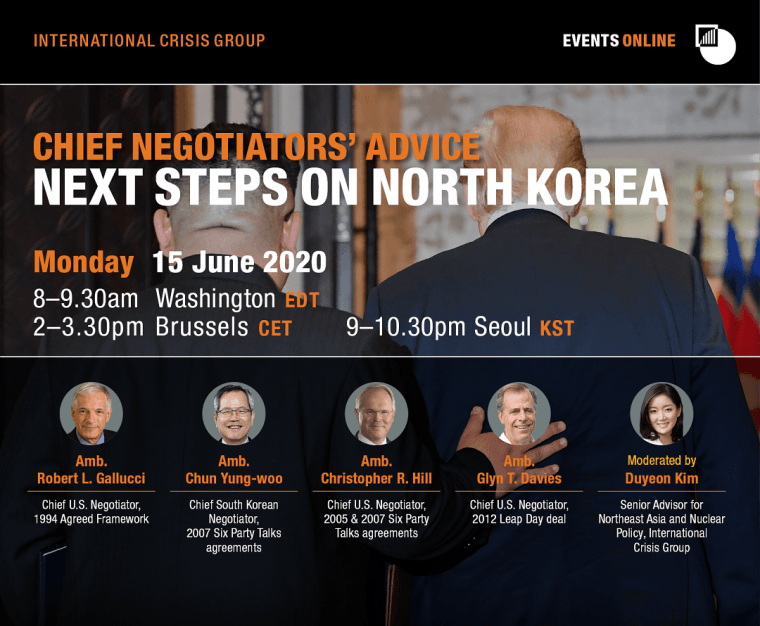