How New Technologies Shape Conflict - the Case of Social Media 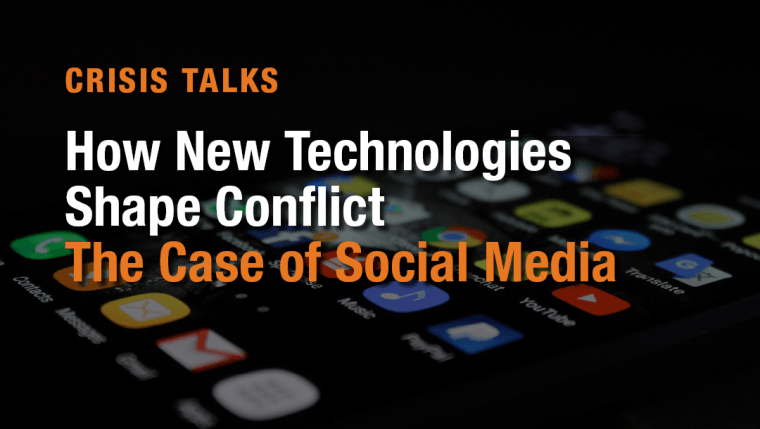 The rise of social media has been a welcome boost for free speech and equal representation, particularly in parts of the world where government-controlled outlets dominate the media space. But this freedom can come with risks of destabilization, as propaganda, misinformation, and hate speech exacerbate offline tensions.

This event will explore the impact of social media in fragile contexts, through two thematic panels. We will look at the importance of state actors in cases such as Myanmar and El Savador, and Syria, but also on the opposition and non-state actors in countries such as Cameroon and Venezuela.

The event will bring together Crisis Group researchers in a roundtable discussion with external experts and discussants from the European Union and specialised institutions, and it will be livestreamed on Crisis Group's YouTube channel.

In many places, the growth of social media has strengthened civil society and free speech. But it has also come with heightened security risks. Jane Esberg and Robert Blecher, will introduce Crisis Group’s work on social media. They will explore how governments, civil society actors and technology companies can mitigate the conflict-exacerbating risks of online platforms and promote peace.

Governments often actively work to use social media to their advantage, whether by monitoring and limiting the opposition's communication capacities, or spreading their own messages. In this session, experts will discuss their research on the use of social media by state actors and its effects on conflict with examples from Myanmar, El Salvador, and Syria. In exchange with participants, the panel will discuss how the EU can intervene to counter violent agendas by state actors, counter hate speech and support media freedom.

Opposition and non-state groups, including rebel and criminal groups, have increasingly turned to social media to communicate amongst themselves and spread their messaging. In this session, experts will explore how these actors use social media in fragile contexts and how this can shape conflict, with examples from Cameroon and Venezuela. The exchange with participants will serve to discuss how the EU can intervene to counter misinformation, hate speech and violence while preserving freedom of speech.