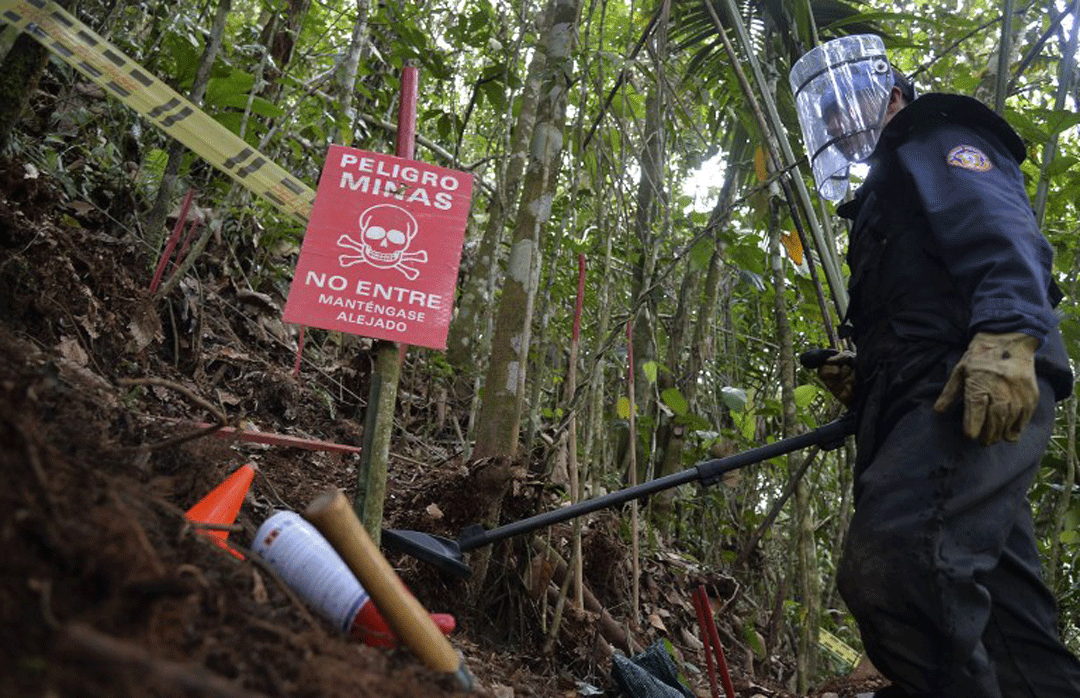 Demining the Path to Peace in Colombia

On 7 March, negotiators for the Colombian government and the Revolutionary Armed Forces of Colombia (FARC) announced they would embark on a joint demining effort. After two and a half years of negotiations in the Cuban capital of Havana, and outline agreements on three agenda points, this is the first accord that will have a direct impact on the ground, delivering long overdue humanitarian relief and bringing Colombia a big step closer to ending five decades of bloodshed.

Colombia is one of the most landmine-contaminated countries in the world. Since guerrillas began systematically using them in the early 1990s, the devices have killed or injured over 11,000 persons, mostly members of the security forces. Landmines are now a threat in about 700 of Colombia’s 1,100-odd municipalities, and have contributed to displacing over six million Colombians. In the most dangerous regions, such as the southern Lower Putumayo region, landmine contamination blocks communities’ access to schools, health services and local markets.

According to a joint statement, the government and FARC will first select a number of pilot zones with the highest level of threat for anti-personnel mines, improvised explosive devices (IEDs), unexploded ordnance (UXO) or explosive remnants of war (ERW). Norwegian People’s Aid, a humanitarian non-governmental organisation (NGO), will then survey where most of the explosive devices are. This is a particular challenge in Colombia, where mines are often widely dispersed, not laid out in regular patterns. Reliable maps are also often absent. Following mine clearance, safe territories will be handed over to communities and local authorities.

If implemented thoroughly, the agreement will not only remove a deadly threat for some of Colombia’s most vulnerable communities, it will also help strengthen the Havana talks and the prospects for durable peace in at least six different ways:

The 7 March agreement between the Colombian government and FARC is short on details and none of the benefits listed above are guaranteed. Failure to implement the accord, or security incidents involving FARC representatives, could become new obstacles to peace, distracting the attention of negotiators from the remaining agenda issues and deepening distrust.

Expectations will also need to be managed. Some mines can be quickly removed, but complete demining is a long-term challenge. On the Peru-Ecuador border, twenty years after hostilities ceased, an estimated 10,000 mines still lurk in the ground. Demining will therefore stretch long into the post-conflict period and require significant additional capacities. Sensibly, the agreement is open to other organisations to help, such as Halo Trust, currently the sole NGO accredited to carry out humanitarian demining in Colombia. With total costs estimated at around $100 million, long-term support from the international community will be vital for a sustainable demining effort.

But the importance of last week’s demining agreement should not be underestimated. After FARC’s unilateral ceasefire, it is the first joint step the parties have taken to stop the violence. With it the Havana negotiations have finally arrived in Colombia.

Launch event of Crisis Group’s report Trapped in Conflict: Reforming Military Strategy to Save Lives in Colombia, based on extensive fieldwork in different regions of Colombia and dozens of interviews with the military and communities. It was held in Bogotá on Tuesday 27 September 2022 at 8:30 am. In the report, Crisis Group analyses why military strategy in Colombia’s rural areas has failed to contain the conflicts that arose following the 2016 peace accord with its largest guerrilla movement (FARC). Crisis Group also proposes new civilian government leaders to prioritise community protection in rural areas and embrace new indicators for gauging the military’s success. The panel was composed of Martha Maya, Latin America Program Director at the Institute for Integrated Transitions (IFI), Elizabeth Dickinson, Crisis Group's Senior Analyst for Colombia, and Ivan Briscoe, Crisis Group's Director for Latin America and the Caribbean. Alberto Lara Losada couldn't attend.