Latin America’s oldest guerrilla organisation, the Revolutionary Armed Forces of Colombia (FARC), is under severe stress. Close to seven years of the Uribe presidency have hurt the FARC’s capability and morale. Several top commanders have been captured, killed in combat, murdered by their own men, or died of natural causes, as in the case of Manuel Marulanda, the FARC’s historic leader. Thousands of foot soldiers have deserted, bringing the guerrillas’ troop strength down by almost half, to perhaps 10,000 today. Still, under its new leader, Alfonso Cano, the FARC has shown renewed internal cohesion and continued capacity to adapt to changes in the security environment. The Uribe government remains wedded to its hardline military approach until the FARC has no option but to negotiate surrender, but this strategy is problematic. President Uribe should keep military pressure up but emphasise devising a political strategy capable of drawing a weakened but still largely intact FARC into peace talks. Priority should also be on strengthening rule of law, protecting human rights and increasing citizen security.

Strong pressure notwithstanding, the FARC still has remarkable adaptive capacity. Key units and some members of the central command (the Secretariat) have withdrawn to strongholds in the jungle and mountains, as well as in neighbouring countries, to evade government offensives and regain strength. The way in which hostage releases and redeployments have been conduc­ted recently suggests that Cano is having some success in reasserting leadership. New tactics rely heavily on ambushes and indiscriminate use of unconventional explosive devices, in a manner that violates international humanitarian law. While command-and-control structures have been decentralised at the tactical level, the FARC Secretariat remains capable of coordinating actions around the country. Still substantial income from drug trafficking enables the insurgents to continue the war but has also led to alliances between some FARC units and Colombia’s many organised criminal outfits and new illegal armed groups (NIAGs).

The successes of the government’s security strategy have resulted in part from the modernisation and growth of its security forces, aided by substantial international technical and financial support, in particular from the U.S. Perhaps even more important have been improvements in the quality and quantity of strategic intelligence, which have enabled precision air raids to kill important rebel commanders and disrupt command-and-control structures. The government is also carrying out an aggressive campaign to undermine rebel morale and induce defections. Still, it is unclear whether Uribe’s effort to splinter the movement will produce positive results. If small FARC groups were driven as a result into the Colombian or even Latin American criminal underworld, it could prove counterproductive.

Further, the Uribe administration has not matched its security strategy – the Democratic Security Policy (DSP) – with an equally rigorous political strategy for ending the conflict. Efforts to consolidate state presence and rule of law throughout the country lack long-term vision and are insufficient to strengthen sustainable civilian institutions at the local level. Counter-drug policies have proven ineffective. Drug trafficking is at the heart of the activities of the organised criminal groups, the FARC, parts of the smaller National Liberation Army (ELN) insurgency and NIAGs, which include rearmed former paramilitaries and paramilitary groups that did not demobilise. Security forces continue to be associated with and responsible for corruption scandals and serious human rights abuses, and the authorities are still a long way from guaranteeing citizen security countrywide.

If Colombia is to end the almost half-century-old FARC conflict, the government should take urgent steps to:

Up Next
Report / Latin America & Caribbean 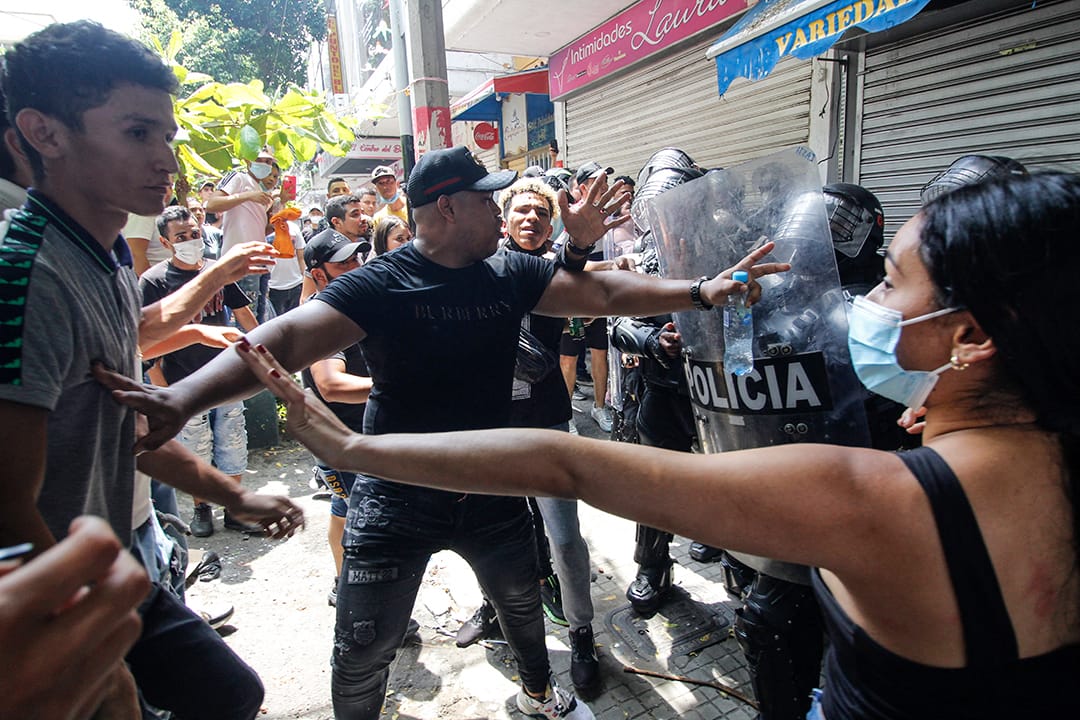 Street vendors -many of them Venezuelans- confront members of the Mobile Anti-Disturbance Squadron (ESMAD) after they were not allowed to continue working, in Cucuta, Colombia, near the Venezuelan border, on March 29, 2022. Schneyder Mendoza / AFP
Report 94 / Latin America & Caribbean 09 August 2022

In recent years, Venezuelans have streamed into Colombia looking for work and respite from their country’s socio-economic meltdown. But dangers also await them, including the clutches of organised crime. Bogotá’s change of government is a chance to reset policy to keep the migrants safer.