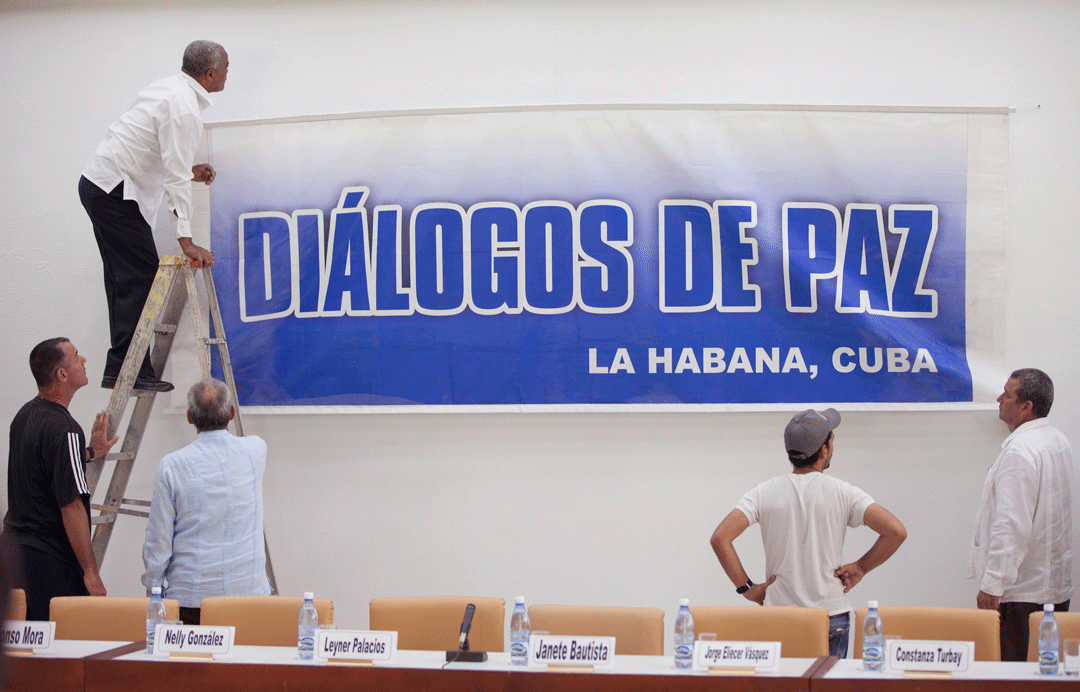 Workers prepare a banner that reads “dialogues of peace" prior to a conference of victims of the Colombian armed conflict in Havana, on 16 August 2014. REUTERS/Alexandre Meneghini
Briefing 32 / Latin America & Caribbean 02 July 2015

On Thinner Ice: The Final Phase of Colombia’s Peace Talks

Recent advances have given Colombia’s peace talks between the government and the Revolutionary Armed Forces of Colombia (FARC) a much-needed respite, but, amid an escalation of violence, the risks of an involuntary collapse are real. Saving the process requires conflict de-escalation, swift progress on the agenda and rallying popular support.

The peace talks between the government and the Revolutionary Armed Forces of Colombia (FARC) enter their toughest stretch both vulnerable and resilient. The former quality was displayed on 22 May, when the collapse of the guerrillas’ five-month old unilateral ceasefire triggered the worst escalation of violence in years. Evidence for the latter came two weeks later, when negotiators ended a year’s drought without major advances by agreeing to establish a truth commission. A separate agreement on reparations also appeared to edge closer. Yet, despite the advances, the talks are on thinner ice than ever. To get them safe to land, the parties must return to an effective de-escalation path, one that moves toward a definitive bilateral ceasefire, once negotiations on the crucial transitional justice issue are sufficiently consolidated. Such gradualism is the best bet to protect the process from unravelling in violence, flagging public support and deep political rifts.

Even if neither side considers abandoning the talks, the broader environment has risks. Ongoing violence causes new humanitarian emergencies, emboldens spoilers and strengthens hardliners. With political patience increasingly thin, it would take only a spark to suspend the process or trigger its break-up. Even anticipating an early reparations agreement, negotiators face highly contentious, interconnected issues, including judicial accountability for serious international crimes committed by both sides, a bilateral ceasefire and final agreement ratification. Sharply-contested local elections in October could further weaken the centre ground upon which a durable peace agreement will need to rest.

Manoeuvring the talks through these perils defies easy fixes. Calls for acceleration or a deadline have grown louder. With business as usual no longer an option, the parties should consider ways to move more vigorously, including by splitting the discussions on victims and transitional justice into smaller, partial agreements, adopting a more compact calendar and involving international partners more closely. But acceleration for its own sake has risks. Hastily hammering out a deal might satisfy political demands, but the resulting accord could easily be impossible to implement and of limited effectiveness. The measured pace reflects real problems, including internal tensions on both sides and an adverse political environment. With the parties already struggling to ratify and start implementing the final agreements before President Santos’ term ends in 2018, a deadline would add little and could throw the process into limbo if missed.

The escalating violence has also intensified calls for an immediate, bilateral ceasefire. This would eliminate the threats ongoing hostilities pose, but the time for it has not yet come. A consensus on what such a ceasefire might look like is still not on the horizon, and, as the breakdown of FARC’s unilateral truce shows, a definitive end of hostilities will not be viable if the mechanisms and protocols to sustain it are not fully accepted by both leaderships. Meanwhile, even if the parties could swiftly agree on these, there are few signs the arrangement could be quickly implemented. Neither the government nor FARC will likely be able to accept the costs of a definitive end of the hostilities while vital concerns are still being negotiated. A bilateral ceasefire will probably only become realistic after there is an agreement on the transitional justice framework.

The first step out of the present difficulty should be more modest. The parties urgently need to halt the escalation of hostilities, starting by showing maximum battlefield restraint, including strict respect for international humanitarian law. This should be accompanied by a new push for bilateral de-escalation, including broadening the demining scheme and exploring the space for discreet, reciprocal hostility reduction. Joint de-escalation would give the negotiators room and foster the mutual trust required to sustain an eventual bilateral ceasefire. Simultaneously, the parties should accelerate technical talks in Havana on the “end of the conflict”, so as to elaborate a proposal for implementing an early bilateral ceasefire after a transitional justice agreement. That ceasefire will need to include both some form of regional concentration of FARC and international monitoring; full cantonment and the “leaving behind of weapons” (disarmament) should follow ratification of the final agreements.

Such an early but not immediate bilateral ceasefire would make it easier to accelerate the process, enabling the parties to save time by starting to implement some agenda issues, while leaving others to the broader political process, including the truth commission. Importantly, it would also help the process put out much deeper political roots. The government has real scope for more consistent, convincing messages, while international community backing will remain vital amid crumbling domestic support. But overcoming widespread disengagement, scepticism and indifference is hard as long as hostilities continue. A ceasefire would create new possibilities to broaden the talks’ political base. At a late stage, this could include moving them, or parts of them, from Cuba to Colombia.

Amid new violence and deflating political support, it is easy to forget what has been achieved. Negotiators have made substantial headway on the conflict’s root causes and main effects. More than three years of confidential and public talks have built a shared sense that the transition is possible. Rather than overhauling what works well, leveraging these gains and strengths is the most promising way forward.