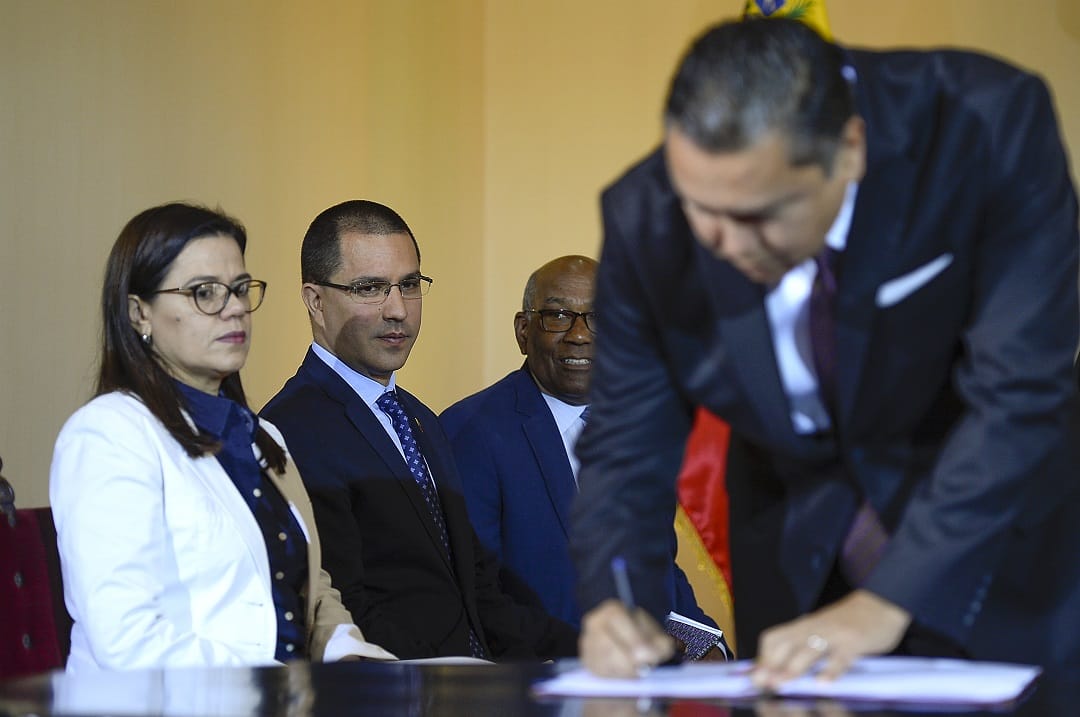 Maduro Finds a “New Opposition” to Negotiate With

Talks to resolve Venezuela’s impasse collapsed on 15 September only for the government to announce a deal – with a different set of opponents. In this Q&A, Crisis Group Senior Andes Analyst Phil Gunson explains what these developments mean for the country’s political and socio-economic crisis.

On 15 September, Venezuela’s opposition leadership, under National Assembly chair Juan Guaidó, announced that it was pulling out of negotiations in Barbados with the government of President Nicolás Maduro. The government side had suspended its own participation over a month earlier, after Washington announced sweeping new sanctions. According to the opposition’s announcement, “the Barbados mechanism is exhausted”. Within hours, the government revealed that it had been negotiating in parallel with a group of small opposition parties that were not involved in the Barbados talks. The members of this National Dialogue (Mesa Nacional de Diálogo) immediately announced an agreement calling for government legislators to once again take up their seats in the National Assembly, which they have boycotted since mid-2017, and requesting release of an undetermined number of political prisoners and relaxation of the government’s grip on the electoral authority. The agreement also speaks of a potential “oil-for-food” program to alleviate Venezuela’s humanitarian crisis.

Why did the Barbados talks break down, and could they restart?

According to President Maduro, the opposition failed to fulfil its promise to persuade the U.S. government to relax sanctions. According to Guaidó, whom the U.S., most EU member states and numerous Latin American countries recognise as the legitimate acting president, the government was at fault, because it never responded to a detailed proposal from the opposition side. The key conditions put forward by Guaidó’s negotiating team were that both he and Maduro would step aside pending free and fair elections within nine months under international supervision. Meanwhile, a transitional Governing Council, comprising representatives of chavismo – the movement created by Maduro’s predecessor, Hugo Chávez – and the opposition, as well as the armed forces, would run the country. The Norwegian government, which was still sponsoring the Barbados talks after they had moved from Oslo, has indicated that it remains available if the parties decide to return to the table. Maduro has said the government will do so if the opportunity arises. And even the opposition appears only to have ruled out the format for talks applied in Barbados, rather than negotiations in general. A redesign of the process, perhaps to encompass a wider range of Venezuelan and foreign parties, would probably be required, however.

Who is involved in the National Dialogue?

So far, five small parties have signed the agreement with the government. Only two have seats in parliament. They are Avanzada Progresista, led by Henri Falcón, a former chavista state governor who broke with the government in 2007, and Cambiemos, led by Timoteo Zambrano, a one-time opposition negotiator who is close to the former Spanish premier (and one-time mediator in the Venezuelan crisis), José Luis Rodríguez Zapatero. Between them they have eight seats in the 167-seat Assembly. The main opposition alliance expelled both Falcón and Zambrano in recent years, the former because he took part in the May 2018 presidential election despite the government’s refusal to accept opposition demands for a level playing field, and the latter for disagreeing in 2016 with the decision by the customs union Mercosur to take punitive action against Venezuela. Falcón obtained 21 per cent to Maduro’s 68 per cent in last year’s poll, but he refused to accept the result, saying the government had violated the electoral law.

Other leading figures who support the agreement are Claudio Fermín, a veteran social democrat and long-time presidential aspirant who now heads a party called Soluciones para Venezuela, and Javier Bertucci, an evangelical pastor who also stood against Maduro in 2018. The parties involved have expressed support for the seemingly defunct Norwegian initiative, as well as inviting other opposition forces to join them. “We are the new opposition”, declared Fermín.

What is the government trying to achieve?

Having failed for now to achieve sanctions relief, the government seems focused on achieving domestic political stability. Next year’s parliamentary elections, which will probably be brought forward to March or April (they are due in December), are an opportunity for chavismo to regain control of the only branch of government that remains independent. Although opinion polls suggest that over 80 per cent of Venezuelans disapprove of Maduro’s rule, the government can win back parliament by dissuading opposition voters from turning out and/or provoking the mainstream opposition under Guaidó into boycotting the election. Holding elections, however controversial, also helps it keep dissent under control within its own ranks, both civilian and military. By presenting at least a façade of pluralism and legitimacy, it promotes a narrative for supporters at home and abroad according to which the government is the victim of an international conspiracy abetted by domestic traitors.

Has implementation of the agreement begun?

Government parliamentarians did not take their seats the day after the agreement was announced, and it is not clear when they will do so or what other effect the deal will have. All the National Assembly’s acts will still be officially null and void unless the Supreme Court declares that the legislature is no longer in contempt. One political prisoner – Assembly vice-president Edgar Zambrano, arrested for his part in the failed 30 April uprising against Maduro’s rule – has been let go and more are supposedly due for release shortly. But close to 500 remain in jail, including another opposition MP and a top aide to Guaidó. In all, some two dozen opposition members of the Assembly are either in jail, in exile, in hiding or on the premises of foreign missions. The government has no majority in parliament with which to appoint a new electoral authority, meaning that any reform would remain in the hands of the government-controlled Supreme Court. And an oil-for-food program, as one of its principal advocates has pointed out, would require the assent of the opposition and its foreign allies.

Could this development lead to a resolution of the crisis?

There is no indication that the government is moving in the direction of Maduro’s departure followed by a genuinely competitive presidential election under international supervision, the conditions which Guaidó and his foreign allies define as the sine qua non for the lifting of sanctions. The breakdown of the Norwegian-sponsored talks is likely to bring more sanctions, rather than fewer, both from the EU and from Venezuela’s Latin American neighbours. With the exception of Panama, the latter have so far shied away from imposing sanctions, but signatories to the Rio Treaty of 1947 – also known as the Inter-American Treaty of Reciprocal Assistance, a Cold War-era regional defence pact – recently agreed to take the first step toward activating it in Venezuela’s case, which could lead to a tougher stance in the region. But while the new agreement will neither placate the mainstream opposition and its foreign allies nor resolve the country’s colossal socio-economic crisis, it could allow Maduro to keep a lid on domestic challenges to his rule if the government succeeds in forcing its more confrontational opponents into exile, replacing them with a more compliant cast of politicians and claiming that it has restored constitutional normality.

A Glimmer of Light in Venezuela’s Gloom