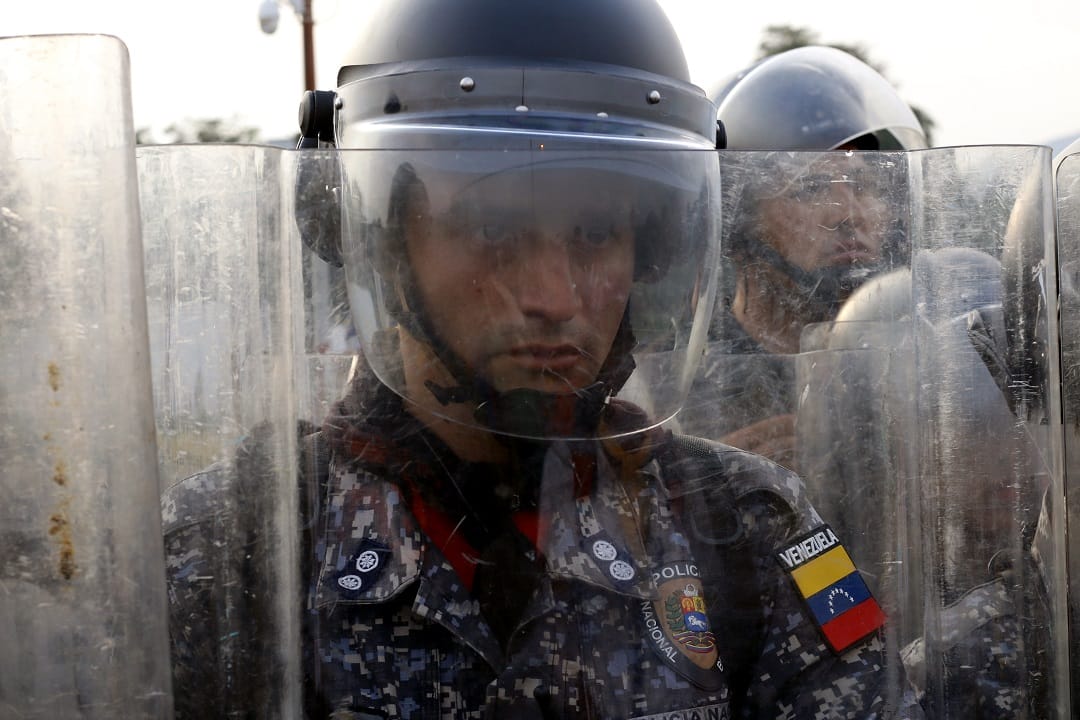 A Venezuelan policeman stands in a cordon as Venezuelan citizens demand them to let the aid in, at the Simon Bolivar bridge, in Colombia after President Maduro's government ordered to temporary close down the border with Colombia on 23 February 2019. SCHNEYDER MENDOZA / AFP
Statement / Latin America & Caribbean 04 March 2019

The month-old struggle over Venezuela’s presidency shows no sign of resolution and risks a dangerous escalation. With this Statement, Crisis Group's Venezuela Campaign shifts into higher gear with an urgent call to negotiate a political transition and meet humanitarian needs while lessening the prospect of a military intervention.

One month after Juan Guaidó staked claim to the interim presidency and Washington imposed oil sanctions, the Venezuelan opposition hardliners’ strategy for removing President Nicolás Maduro has produced no immediate results. Though under extreme financial pressure, and notwithstanding the decision by dozens of countries to transfer recognition from Maduro to opposition leader Guaidó, the government has refused to hand over power. The hardliners’ approach, designed in tandem with the Trump administration, threatens to worsen Venezuela’s crisis rather than resolve it.

Close to 600 members of the security forces have deserted in the past week, with Venezuelan troops and police flowing daily across the bridges into Colombia. Yet the bulk of the military continues to back the Maduro government. An offer of amnesty for those soldiers willing to switch sides seems to have found few takers. This is no surprise. Many in the military regard amnesty as insulting, as the term suggests that they are criminals. The armed forces are also fragmented, due both to coup-proofing policies begun under President Hugo Chávez and to the government’s economic co-option of the top brass. The severe internal repression exercised by military intelligence, along with Cuba’s G2, further reduces the likelihood that a sizeable fraction such as a division or regional command will break ranks with the government.

The highly publicised 23 February attempt to introduce humanitarian aid into Venezuela succeeded in one respect: it demonstrated how far the Maduro government will go to resist what it described as a Trojan horse for military intervention. But the government believes that it emerged victorious, since the aid effort did not fracture the ruling coalition or bring much, if any, assistance into the country. The aid standoff also showcased the opposition’s lack of a credible Plan B. The effort’s apparent failure led some hardliners to call more vocally for outside military intervention, only to see major Latin American states firmly reject that option at a 25 February meeting of the Lima Group – an association of Latin American nations plus Canada convened in 2017 to resolve the Venezuelan crisis – in Bogotá. The threat of intervention has receded for the time being, and divisions in the international coalition backing Guaidó lie exposed.

A potential way out exists, but it will require both sides to make tough compromises brokered by a third-party mediator.

Meanwhile, Venezuela will soon feel the devastating economic and social impact of oil sanctions. The numbers fleeing the country are set to rise dramatically, as the government struggles to make ends meet; the opposition’s popularity could also sharply decline as the public sees no improvement in its lot. Amid larger refugee flows, calls for action will likely intensify. The result could be two unattractive scenarios: a steady deterioration of the country’s misery, with no plan for ending it, or renewed interest in a perilous foreign military intervention that could sow chaos in Venezuela and beyond.

Working Toward a Non-violent Solution

Both sides have raised the possibility of talks to resolve the crisis, but at present neither side is willing to soften preconditions that the other finds unacceptable. Maduro’s allies say they are prepared to negotiate institutional and political reform, as well as, potentially, early elections, but not an immediate handover of power; for the current opposition leadership, as well as for the U.S. and Lima Group states, Maduro’s exit from power is a required first step, to be followed by an interim government and elections under new rules to be drawn up during the transition phase. Both sides seem to believe that time is on their side: the government, insofar as it thinks that if it can hold on for two or three months, the worst will be over; the opposition, insofar as it holds the view that as pressure grows, Maduro’s camp and the military will crack. It is a recipe for a stalemate that harms all sides: a deepening economic plight that makes it increasingly difficult for Maduro to govern, coupled with a perpetuation of his hold on power that makes it impossible for the opposition to realise its aspirations.

A potential way out exists, but it will require both sides to make tough compromises brokered by a third-party mediator. A proposed transition could occur in stages. The government would need to take confidence-building measures, most importantly releasing political prisoners; dissolving the National Constituent Assembly elected in 2017 (which is stacked with Maduro allies), if necessary after a referendum on its final constitutional reform proposals; and restoring the opposition-controlled National Assembly’s powers. The second stage should then be free and fair elections, under a comprehensively reformed Electoral Council and with full-scale international monitoring. Such elections would need a minimum of nine months and more likely over a year to prepare.

During the interim, the Maduro government could transfer power to a transitional cabinet including representatives of both chavismo and the opposition. All sides would need to reassure the military high command as to their future; it would be essential to have them on board for any successful transition. The opposition’s amnesty offer depends for its effectiveness on trust that does not exist at present. The only guarantee that will likely appeal to the military is a share of power, meaning their participation in the transitional government, combined with a clear framework for their future role. Such guarantees can emerge only from substantive negotiations, not from personal decisions by senior officers taken in response to public offers such as amnesty or the lifting of individual sanctions. The primary tasks of the transitional regime would be economic stabilisation, humanitarian assistance, internal security and institutional reform, all of which are likely to require significant external assistance.

In other words, Venezuela will need a genuine transition period as opposed to the kind of abrupt “regime change” that many in the military, the chavista movement and the government believe the current plan implies. An international monitoring and verification process, involving countries acceptable to both sides, could cement the guarantees and other commitments made in such negotiations.

Both Maduro and Guaidó allies also should find ways to lower tensions along the border with Colombia.

The centrality of the military to a transition suggests that the high command will need to make the first significant move in this direction, with the understanding that its core interests will be respected. The armed forces will also need to preserve what remains of its institutional cohesion to deal with significant internal security issues during and after a transition phase. Optimally, the opposition would hold the principal economic portfolios in the transitional government while chavismo would continue to control security and defence ministries, albeit with a mandate to reform, notably by ending the worst abuses by security forces. And, optimally, neither Maduro nor Guaidó would hold the presidency during this period, though agreement on this point ought not to be a precondition for negotiations to commence. The presence of Maduro in particular will be a sticking point for both the internal opposition and the U.S. administration. But unless he is ousted in a palace coup or by some other means prior to negotiations, he is unlikely to step aside; he almost certainly would not do so in favour of Guaidó, whose presidency the government and chavistas would perceive as a U.S.-backed coup d’état.

Recently, voices within the U.S. government have sounded a welcome note in this regard, albeit in private: they seem to accept that a negotiated transition is the most desirable way forward, recognise that bringing chavistas on board would be a pivotal step, and acknowledge both that the Venezuelan military will need to play a central part in urging the Maduro government toward such an outcome and that this will not happen through individual defections or offers of amnesty. But there are discordant notes, and these unfortunately come from the most senior levels: statements from National Security Adviser John Bolton to the effect that the U.S. administration is “not afraid to use the word Monroe doctrine” and that its goal is to put an end to the experiments of former President Hugo Chávez as well as of Maduro, are highly unlikely to assuage the fears of chavistas or others about Washington’s intent.

The humanitarian needs of ordinary people living in Venezuela as well as of the growing diaspora are urgent and require redress without preconditions. No party should politicise Venezuelans’ suffering, as the U.S. and opposition hardliners did on February 23; nor should anyone ignore the suffering on the grounds that no crisis exists, as the government continues to disingenuously proclaim. To meet the needs, the government must accept more humanitarian assistance; to date, humanitarian agencies operating in Venezuela have done their work discreetly and on a relatively small scale in light of the government’s public aversion to aid. For their part, and in particular given that they chose to impose oil sanctions, the U.S. and the opposition should agree to steps that will alleviate suffering even before a transitional government is in place. Both Maduro and Guaidó allies also should find ways to lower tensions along the border with Colombia, where a miscalculation – or deliberate provocation – could lead to a wider conflict.

Aid continues to get into Venezuela by private transport, but to reach the most vulnerable people in sufficient volume it must be greatly expanded. One option would be to formally place the delivery and verification of aid in the hands of neutral parties such as the Red Cross and the UN. At the same time, the UN should consider establishing a cross-border aid operation protected by a small contingent at both ends, for example, of the Tienditas bridge close to the Colombian border town of Cúcuta. This operation would require the consent of both Colombian and Venezuelan authorities, as well as the informal acquiescence of the opposition and its international backers. The UN could set up such a mechanism through agreement among its branch offices and the governments in the two countries. These understandings would be essential to ensuring suitable security conditions for the passage of aid across the land border, and the UN could also use such channels to expedite aid deliveries via Venezuelan airports. These steps might allow both sides to save face, while addressing the humanitarian emergency on a larger scale than has hitherto been possible.

Once aid reaches Venezuela, distribution should fall under the control of a National Coordination Mechanism, comprising the main aid agencies operating in the country and government representatives. This mechanism would work alongside the UN in identifying populations with the greatest need, above all in southern Venezuela, and guaranteeing that aid reaches them (no independent assessment of humanitarian needs has yet been carried out in Venezuela). The mechanism could help ensure that all concerned use aid properly and transparently and that the government does not divert it for political purposes.