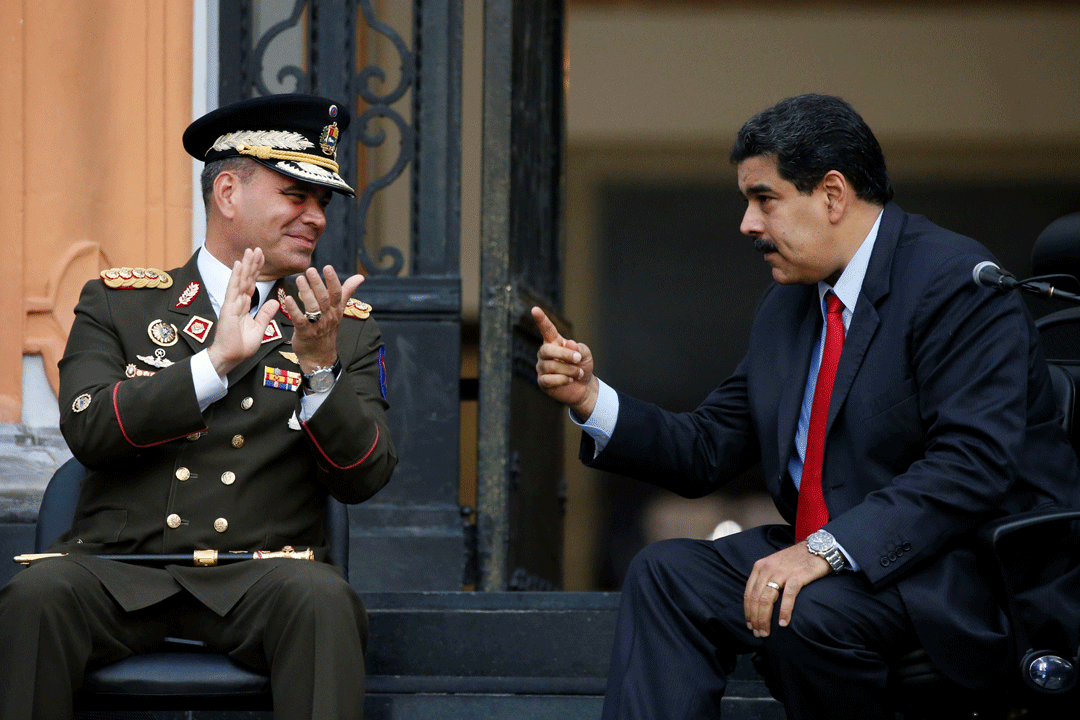 Nicolás Maduro was elected president of Venezuela in April 2013 by a narrow margin. His term is due to end in January 2019, unless the opposition Democratic Unity (MUD) alliance can force a recall referendum this year – and win it. But does President Maduro really run the country?

In recent weeks Nicolás Maduro appears to have taken a back seat to Venezuela’s top general, defence minister Vladimir Padrino López, who also – unusually – holds the post of operational commander of the armed forces.

On 11 July, Maduro announced that he and Padrino would jointly head a newly-created “Civilian-Military Presidential Command”, charged primarily with resolving the country’s acute shortage of food, medicines and other basic goods. All other ministries and state institutions have been subordinated to this body, whose functions not only cover stimulating production, controlling prices and overseeing distribution and imports of food, but also the country’s security and defence.

The prominence of the military in determining Venezuela’s political future was illustrated once again by the appointment on Wednesday of Néstor Reverol as interior minister. Unlike Padrino, who rose through the army, Reverol hails from the National Guard. His alleged criminal connections – he was promoted to the post of minister after being served a US court indictment the day before for assisting drug traffickers – suggests that different factions in the military may now be jostling for shares of influence in the state.

None of this is unprecedented. For most of its history, Venezuela has been ruled by men in uniform. The last military dictator, General Marcos Pérez Jiménez, fled the country in 1958. Although none of the coup attempts since then has been successful, the leader of a failed attempt to overthrow the government in 1992 – Lieutenant-Colonel Hugo Chávez – was elected president six years later and installed what he called a “civilian-military” regime. In 2007, the armed forces adopted the defence of Chávez’s “socialist revolution”, rather than the defence of the nation, as their raison d’être.

Just before his premature death from cancer in 2013, Chávez anointed his then foreign minister, Maduro, as his successor. Amid accelerating economic decline and a looming humanitarian crisis, the opposition MUD won a resounding victory in the parliamentary elections of December last year. But the government has used its control of the Supreme Court (TSJ) to block every parliamentary initiative since then. Maduro now rules by decree under sweeping emergency powers twice rejected by the legislature but ratified by the TSJ. After five months, the government-controlled electoral authority (CNE) this week finally authorised the MUD to make a formal request to gather the signatures required to trigger a presidential recall referendum, as provided for in the constitution. No date has yet been set for this next stage in the referendum process.

With over 80 per cent of the electorate – according to recent opinion polls – keen to see Maduro leave office, by constitutional means, as soon as possible, the armed forces’ ability to maintain control of an increasingly restive population may be critical in determining whether he remains in power. Order is currently being ensured by riot squads from the National Police (PNB) and the National Guard (GNB), but episodes of mass looting have become a frequent occurrence in recent months, stretching their resources.

No one knows for certain how the army would react if ordered onto the streets, but most experts suggest the officer corps would be reluctant to order troops to fire on mass protests. Nonetheless, new rules of engagement introduced under Padrino theoretically allow the use of deadly force in crowd control under certain circumstances. Human rights groups and the UN say the rules, contained in a defence ministry resolution in January 2015 and ratified by the TSJ, run counter to the constitution, and have voiced concern over the vagueness of the resolution’s wording.

The defence minister himself is the subject of much speculation regarding his motives and intentions. Padrino rose to prominence through his unwavering loyalty to Chávez, having been one of the officers who stood by the late president when he was briefly ousted by a coup in 2002. But it is widely rumoured that he blocked a move by elements in Maduro’s government to steal last year’s legislative election, earning himself the enmity of the regime’s erstwhile number two, Diosdado Cabello, himself a former army officer. Both deny the story. Padrino’s retirement has twice been postponed, and his longevity as defence minister in the face efforts to unseat him suggests he has the backing of a majority of senior officers.

For Maduro, who belongs to the radical, civilian left of the chavista movement, the armed forces represent a double-edged sword. A greater percentage of current cabinet ministers are military officers, both serving and retired, than under Hugo Chávez, while almost half the ruling party’s twenty state governors are former members of the armed forces. In December, the president announced a “very well-thought-out and detailed plan” to de-militarise the administration by sending officers currently serving as public officials back to the barracks. His well-thought-out plan came to naught: barely a handful actually left their jobs. Now he seems to have felt compelled to put the armed forces in charge of the single most pressing issue facing the regime: how to stop public anger over the lack of food and medicine bringing down the government. The gradual expansion of military powers in response to the regime´s loss of legitimacy is starting to resemble a slow-motion coup.

There is no doubt the current situation is dire. The International Monetary Fund (IMF) predicts that Venezuela’s GDP will fall by around 8 per cent this year, following a 5.7 per cent contraction in 2015. Inflation figures leaked from the Central Bank (which provides little by way of official data) suggest prices may be rising at an annualised rate of 1,000 per cent. Many basic goods, including food and medicines, are almost impossible to obtain except on the black market. The recently published Latin American Study of Nutrition and Health (ELANS) showed that already by 2015 more than a fifth of Venezuelans were eating fewer than three meals a day. Average calorie consumption was well below the recommended level.

What is in doubt is the army’s ability to improve the situation. The state-run food and agriculture apparatus has long been dominated by the generals and managed according to the principles of a command economy. The government has responded to inflation and scarcity with ever more stringent controls, on everything from pricing to inventories to the movement of goods. The result has been a collapse in domestic production and rampant corruption and smuggling. After opposition legislators claimed that two brothers-in-law of former food minister General Carlos Osorio made millions from contracts to import food, the courts slapped a gag order on them. State prosecutors and the government auditor’s office have so far shown no interest in investigating the allegations.

Despite the appearance of an increasingly military-dominated government, General Padrino has said that he does not want to “militarise” the administration but to “restore order” in the face of a “lack of governance” – a strange choice of words, given that any such lack must be attributed to his commander-in-chief. But he too has shown no sign of moving against fellow officers accused of stealing billions of dollars in public money. Instead, he has reiterated the government’s claim that it is facing an “economic war” waged by the opposition and its foreign allies, led by Washington. True to this logic, the government’s Resolution 9855 of 22 July allows it to force companies to provide workers to boost productivity in the food and agriculture sector – a move rejected by the trade unions, who say they were not consulted and have declared that they will not obey a decree one union leader said seeks to turn “workers into soldiers”. The government has since stated that firms would only contribute workers on a voluntary basis. However, the dismissal this week of the relatively business-friendly Industry Minister Miguel Pérez Abad and his replacement by bureaucrat Carlos Faría confirms an overall reliance on state economic planning.

There is no doubt that Padrino is now the second most powerful man in the country – if not the most powerful. Vice President Aristóbulo Istúriz remains in his post but has, at least for now, taken a back seat. At recent celebrations marking the birthday of the father of the nation, Simón Bolívar, it was Padrino, not Istúriz, who stood in for an absent Maduro.

With so much power concentrated in the hands of the military, understanding what their goals are is paramount. Rather than merely shoring up an increasingly unpopular president, the aim of the generals may be to control the transition in a way that protects their own interests. The military can be expected to be particularly attentive to their sources of revenue, some of them illicit, to their political powers, and to their reputation as custodians of Venezuela’s peace and sovereignty. Different priorities may well correspond to distinct factions within the armed forces.

The defence minister’s new role means “the dialogue [over] transition will be with the military”, as one defence expert put it. Padrino has in the past questioned the legitimacy of holding a recall referendum. But some who know him say the defence minister is not as diehard a chavista as his public statements suggest, and may support a referendum if he believes it to be in the military’s best interests. Assuming the opposition is unable to force a referendum this year, the departure of the president could in principle be managed, under the constitution, without triggering an immediate election. Instead, during the last two years of his term, an appointed vice president would take office, affording a potential route for military and civilian factions to be reshuffled under the auspices of the current regime. But if the army cannot halt the slide into economic and social chaos, the crisis could take the generals with it too. So far, there is no sign of a workable plan in that regard.